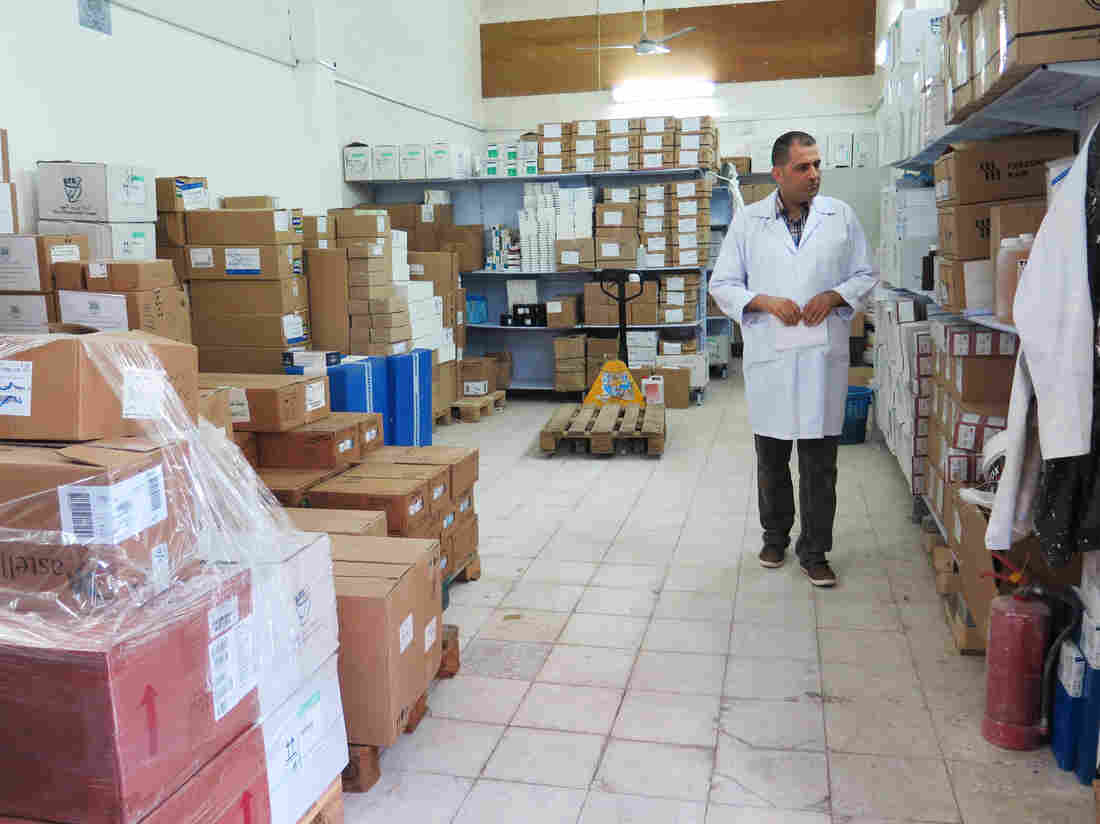 Nael Skaik, the pharmacy director at Gaza's main hospital, says this medicine storage room is usually so full of boxes of medicines that it's hard to find space to walk. Now medicines are running out as Palestinian Authority President Mahmoud Abbas has held up medicine shipments to Gaza to pressure Gaza's Hamas leaders to surrender power. Daniel Estrin/NPR hide caption 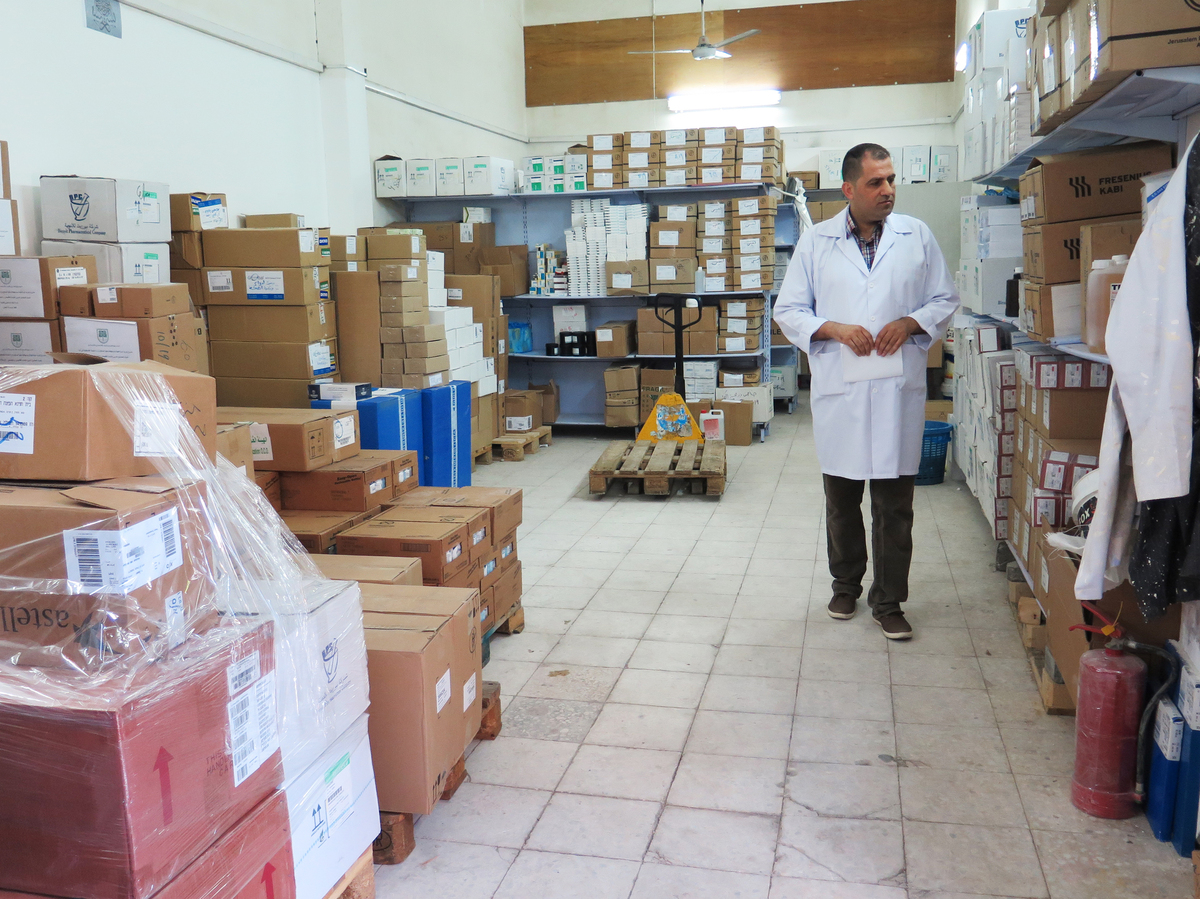 Nael Skaik, the pharmacy director at Gaza's main hospital, says this medicine storage room is usually so full of boxes of medicines that it's hard to find space to walk. Now medicines are running out as Palestinian Authority President Mahmoud Abbas has held up medicine shipments to Gaza to pressure Gaza's Hamas leaders to surrender power.

Ten years ago this summer, the Palestinian Islamist group Hamas staged a coup, ousted members of the rival Fatah party and took over the Gaza Strip.

It felt it took what it deserved: Hamas had won the majority of seats in the 2006 Palestinian legislative elections, but Hamas and Fatah couldn't work out how to share power.

It led to gun battles. A 29-year-old man saw his cousin, a Fatah border guard in training, get shot in a fight with Hamas gunmen in one of the many battles that led to the coup. The man is afraid to be identified — even a decade later.

"The darkest 10 years of my life" is how he summarized his life since Hamas took over Gaza.

It's been a dark decade for most of Gaza's 2 million people. Egypt and Israel keep Gaza's borders nearly sealed, citing security concerns due to Hamas' attacks on Israelis and its refusal to renounce violence, so most people can't go in or out. Imports are restricted. Thousands have died in three Hamas wars with Israel.

Now the hardship is entering a new phase. Palestinian Authority President Mahmoud Abbas — the leader of Hamas' rival Fatah party and president of the Palestinian Authority government, who lost control of Gaza 10 years ago and rules only in the West Bank — has cut back on the money and provisions he has provided Gaza over these last 10 years, aid he'd provided in an attempt to assert leadership over Gaza.

The aim: to pressure Hamas to give him back the keys to the territory.

"We can't be expected to fund a coup against us," Ahmad Majdalani, a confidant of Abbas, told NPR in his West Bank office.

"It's very, very dangerous," said Shifa Hospital pharmacy director Nael Skaik, clutching a list of dozens of medicines that are out of stock. "You talk about very sensitive medications, not available in local market. Not available here." Among the unavailable drugs: antibiotic skin ointment and medicines to treat infants born with hypoglycemia and to counteract venomous snake bites.

Now Gaza has just a few hours of power a day. It affects nearly every aspect of life.

Sewage can't be treated, so it's dumped into the Mediterranean Sea — a chronic problem exacerbated by the power cuts. With summer temperatures soaring into the 90s, homes can't be cooled, but the sea is too polluted to bathe in and cool off. Tap water frequently cuts off. Refrigerators aren't reliable. Sometimes power comes on in the middle of the night, and people wake up to run their laundry machines.

Raed, a farmer who requested that his last name not be published, often sleeps in a shack in his field so he can irrigate his crops when electricity comes on in the middle of the night.

He's tired of paying taxes to Hamas, which is estimated to collect about $20 million a month from Gazans.

"Hamas is used to taking money, not giving any services. They are willing to take everything," he said. He then offered up a vulgar analogy.

"I hate Hamas from the bottom of the bottom of my heart," he continued. "From the river to the sea," he added, using a common reference to the borders of pre-1948 Palestine, from the Jordan River to the Mediterranean Sea.

Gazans are openly angry at Hamas much more than in the past, and some have been punished for speaking out.

But they don't necessarily like the alternative. Fatah is even worse than Hamas, in the Gaza farmer's eyes.

"They're dirtier," he said.

And that's the thing: Abbas' government in the West Bank is making no friends in Gaza by slashing electricity. And if the aim is to pressure Hamas' senior leaders, they're not feeling the heat, said Gaza political science professor Mukhaimer Abu Sada.

"Many Hamas institutions and senior leaders have giant generators where they are able to solve the electricity problem," said Abu Sada. "Even air conditioning is on when these generators are on."

By cutting off money and electricity to Gaza, Abbas is cutting himself off from Gaza, Abu Sada said.

"After 10 years of the current political split, I believe the split might become permanent and go into final separation between Gaza and West Bank," Abu Sada said.

The stakes go beyond just Gaza.

President Trump wants to work with Abbas on an Israeli-Palestinian peace deal. But it will be hard for Abbas to claim he represents all Palestinians with Gaza out of his hands.

A Hamas spokesman, Hazem Qasem, said the group needs to be included in the equation. Hamas is a resistance movement, Qasem said, and cannot be ignored.

Hamas is shunned by the international community and has lost significant financial support from many of its former Arab and Muslim backers. The question now: What will happen now that Hamas is being pushed into a corner?