Accessibility links
Academic Adviser Of Princeton Student Sentenced For Spying In Iran: 'Everything He Did Was Normal' : Parallels Iran says it has sentenced the Princeton student to 10 years for spying. He may have been caught up in a power struggle between hardliners and the more moderate government of President Hassan Rouhani. 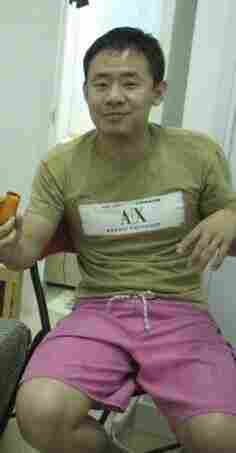 This 2009 photo released by a friend of Xiyue Wang shows Wang at his apartment in Hong Kong. Princeton University professor Stephen Kotkin, who advised Wang, defended his former student as innocent of all charges against him. Friend of Xiyue Wang/AP hide caption

Iran says it has sentenced an American graduate student to 10 years in prison for spying for U.S. and British intelligence agencies. The Princeton University student was in Iran doing research when he was arrested.

"He had tremendous background, life experiences, linguistic capabilities, and so he entered the program and hit the ground running and developed his interests even more," Kotkin says.

The fieldwork stage of Wang's scholarly research took him to Iran about a year ago, Kotkin says. Before he left, Wang called upon established scholars for information.

When doing academic fieldwork, he says, a researcher's time is limited but the need for documentation is infinite.

But Wang never got that opportunity. He was arrested 10 months ago. Princeton says it has been working quietly to win his release.

"He was arrested in Iran last summer, while there doing scholarly research on the administrative and cultural history of the late Qajar dynasty in connection with his Ph.D. dissertation," Princeton spokesman Daniel Day said in a statement. "Since his arrest, the university has worked with Mr. Wang's family, the U.S. government, private counsel and others to facilitate his release."

This weekend, the Mizan news agency, a mouthpiece for Iran's judiciary, broke the news of Wang's 10-year sentence.

It said Wang was accused of gathering confidential articles with the intention of delivering them to the State Department and Western academic institutions.

Alex Vatanka, a senior fellow at the Middle East Institute, says materials "dealing with matters going back to the 19th century would be a very different matter than, say, Iran's ongoing nuclear program."

Wang is a U.S. citizen, born in China. His arrest comes as several Iranian-Americans are already being held in jails in Iran.

Vatanka says Wang may have been caught up in a power struggle in Iran between hardliners and more the moderate government of President Hassan Rouhani. Two years ago, Rouhani signed a nuclear agreement with the U.S. and other world powers to curb Iran's nuclear capability in exchange for easing economic sanctions. Since then, Rouhani has been trying to bring in foreign investment and burnish Iran's image, Vatanka says.

"When something like this happens, it takes them back 10 steps to images of Iran that they certainly don't think are helpful for the kind of future of the country that they'd like to build," he says.

Suzanne Maloney of the Brookings Institution says these sorts of arrests and prison sentences are a persistent risk in Iran, especially for individuals traveling on their own, students and dual nationals.

"There's often a temptation to look for some kind of logic here," she says. "I think that this particular case highlights the fact that the logic is simply the paranoia of the Islamic Republic — its judiciary and its security services in particular."

The State Department issued a statement saying it's aware of the reports of Wang's incarceration and is calling for the "immediate release of all U.S. citizens unjustly detained in Iran so they can return to their families."

In a previous version of this story, Xiyue Wang's surname was misspelled in two instances as Wong.