Accessibility links
After Death Of Chinese Nobel Laureate Liu Xiaobo, Concerns Grow For His Widow's Well-Being : Parallels Officials say Liu Xia is "free" but foreign reporters who've sought her out say they were harassed by security officials. Friends say her isolation during house arrest has thrown her into depression. 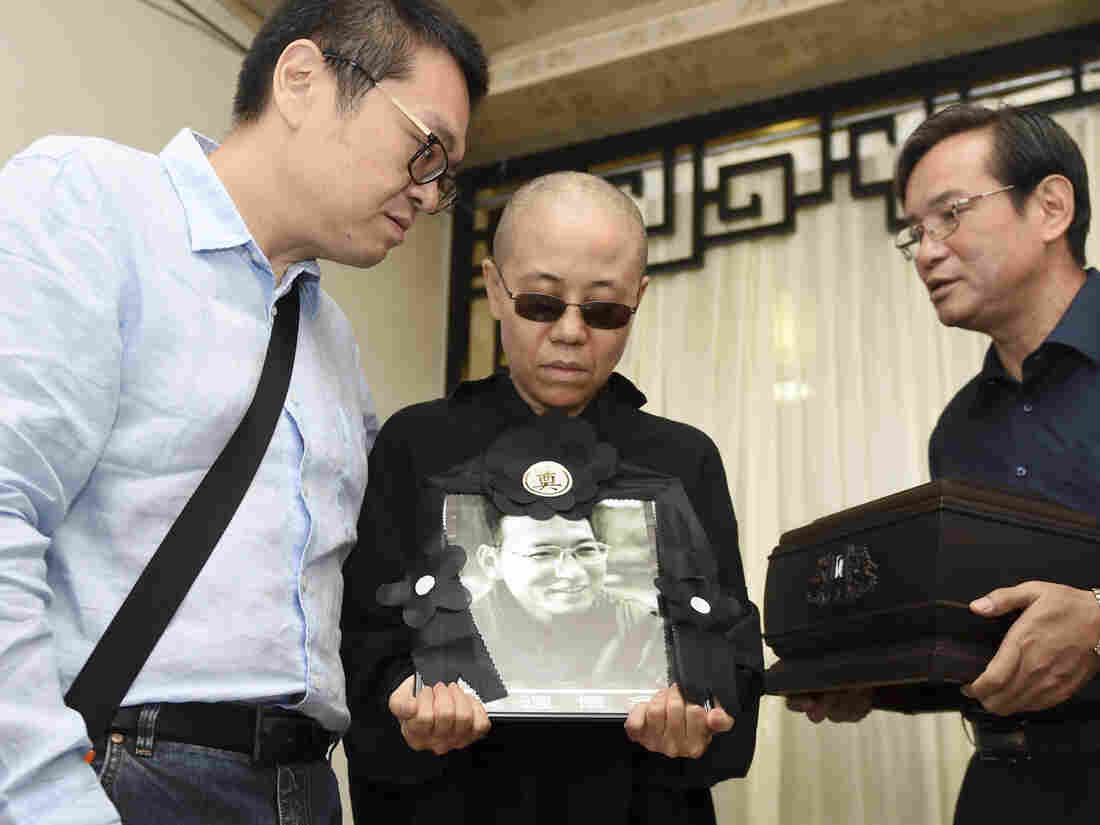 In a photo provided Saturday by the Shenyang Municipal Information Office, Liu Xia, center, the widow of Chinese dissident Liu Xiaobo, holds a portrait of him during his funeral. She stands with Liu Hui, her younger brother (left) and Liu Xiaoxuan, the younger brother of her late husband, who is holding his cremated remains. AP hide caption 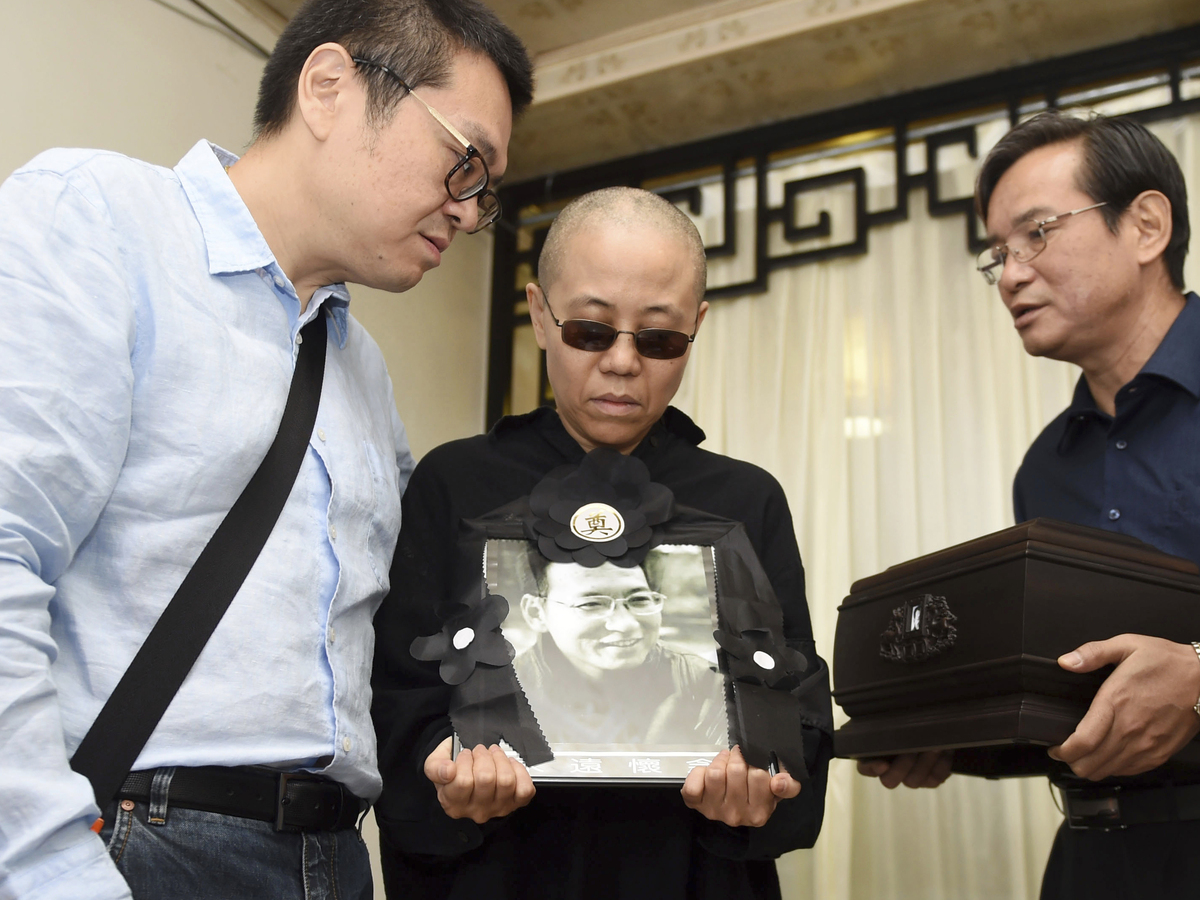 In a photo provided Saturday by the Shenyang Municipal Information Office, Liu Xia, center, the widow of Chinese dissident Liu Xiaobo, holds a portrait of him during his funeral. She stands with Liu Hui, her younger brother (left) and Liu Xiaoxuan, the younger brother of her late husband, who is holding his cremated remains.

A Chinese official made this assertion to allay concerns that the widow of prominent Chinese dissident Liu Xiaobo, who died July 13, remains under house arrest — as she has been for most of the time since her husband was awarded the 2010 Nobel Peace Prize.

"We want Liu Xia to avoid more trouble," added the official, Shenyang city government spokesman Zhang Qingyang, speaking at a press briefing on Saturday. But he did not specify her whereabouts. "I believe the relevant departments will protect Liu Xia's rights according to the law," he told reporters.

Tears And Anger: World Responds To Death Of Chinese Dissident

As far as many of her family, friends and supporters are concerned, Liu Xia is missing — probably still in custody and under surveillance of authorities, if not under house arrest. Foreign journalists who went looking for her in recent days say they were harassed by plainclothes security officials.

The Norwegian Nobel Committee "is deeply worried about Liu Xia's situation in the aftermath of her husband's tragic death," Olav Njoelstad, the secretary of the committee, told Reuters. "We call upon Chinese authorities to lift all restrictions they have put upon her. If she wants to leave China, there is no justification for denying her the opportunity to do so."

The struggle to control Liu Xiaobo's memory continues even after his death, critics say. Official statements such as Zhang's are merely "part of the authorities' very grotesque manipulation of the narrative" of Liu's death, says Maya Wang, a Hong Kong-based researcher with Human Rights Watch.

And his widow is likely to remain a key part of the struggle. A picture of Liu Xia released by the Shenyang government shows her with a shaved head, wearing black clothes and sunglasses, looking down at a picture of her husband after his death.

Although Liu Xia is a prisoner of the state, Wang says she has never been convicted of any crime. Her continued house arrest, Wang says, "is unlawful, and it follows the Chinese government's long tradition of punishing family members for the crimes of activists."

Wang says this tradition of punishment is meant to keep activists from communicating via their relatives, and to pressure the activists themselves to repent and change their errant ways. 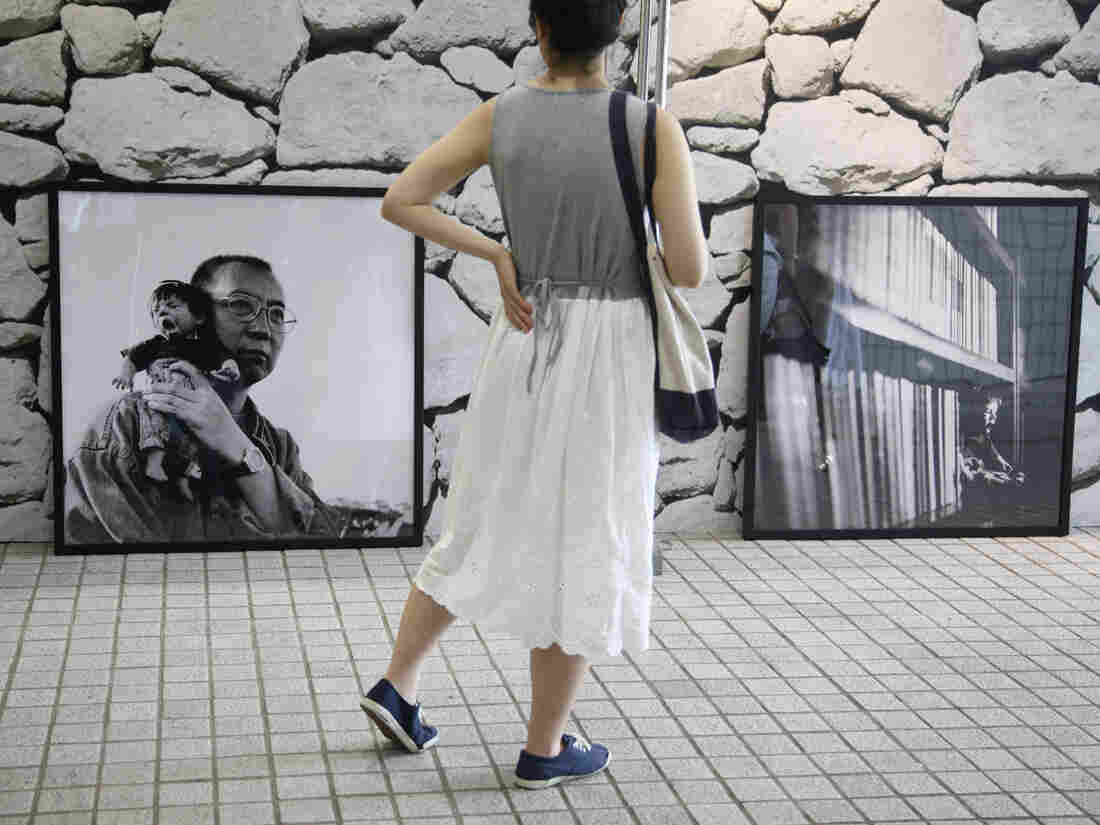 A visitor looks at Liu Xia's photograph of her husband Liu Xiaobo holding a doll, during the 2012 "Silent Strength of Liu Xia" exhibition in Hong Kong. The photographer, painter and poet has been under house arrest for most of the time since her husband was awarded the Nobel Peace Prize in 2010. Kin Cheung/AP hide caption 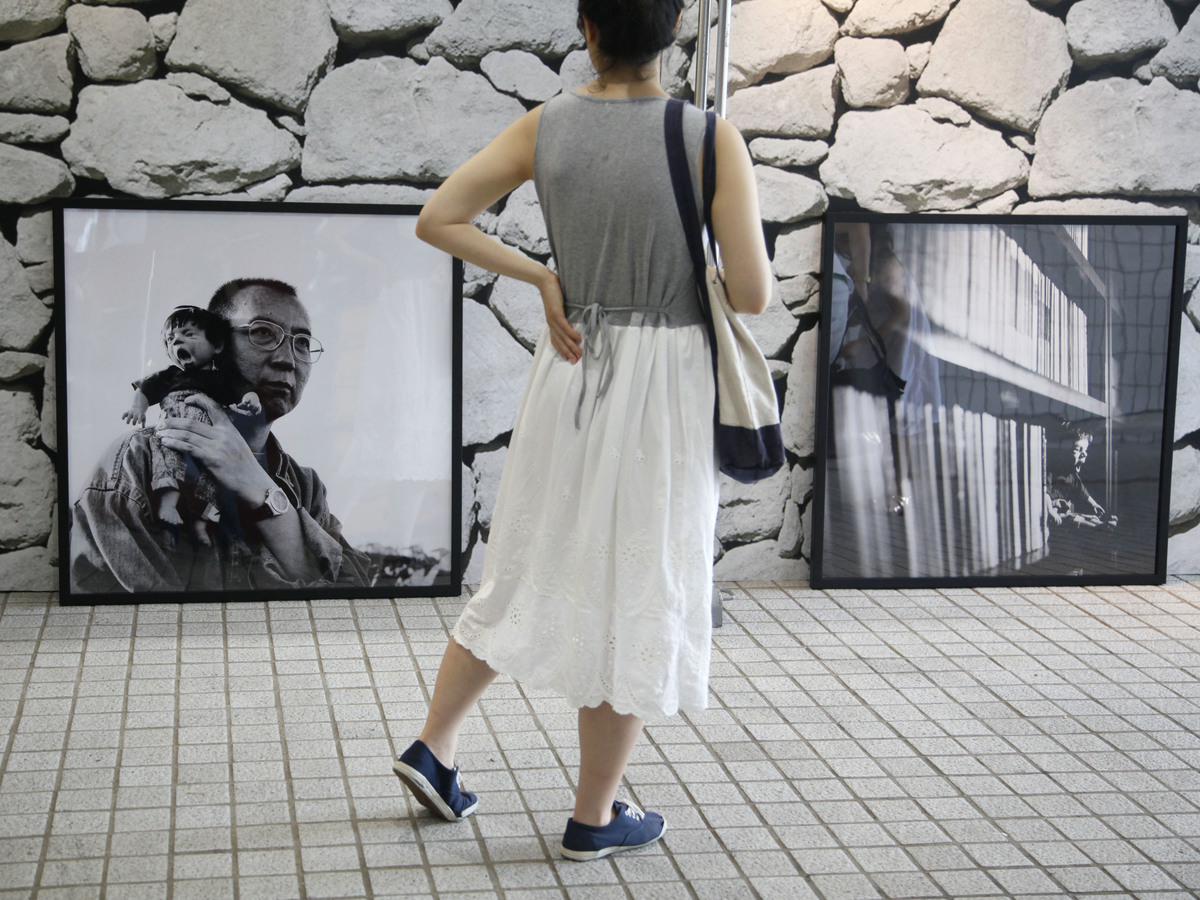 A visitor looks at Liu Xia's photograph of her husband Liu Xiaobo holding a doll, during the 2012 "Silent Strength of Liu Xia" exhibition in Hong Kong. The photographer, painter and poet has been under house arrest for most of the time since her husband was awarded the Nobel Peace Prize in 2010.

But Liu died unrepentant in a hospital in the northeastern Chinese city of Shenyang, with his wife reportedly by his side. The Nobel laureate had been diagnosed with late-stage liver cancer in May and was on medical parole while serving an 11-year sentence for subversion. The couple had only seen each other intermittently during his time in prison.

The Chinese government rejected foreign governments' calls for him to be treated overseas, calling them meddling in China's internal affairs, but allowed two foreign doctors to examine Liu in China.

Liu was cremated and his ashes were scattered in the sea on Saturday, something the government insists was done in accordance with his family's wishes. Liu Xiaobo's older brother, Liu Xiaoguang, thanked the government and Communist Party at Saturday's press conference, because, he told reporters, "Everything they have done for our family shows a high level of humanity and personal care to us."

Liu's supporters, though, say the government was trying to avoid leaving a grave or other place where Liu could be commemorated.

Liu Xia, a painter, poet and photographer who'd earlier worked as a Beijing civil servant, met Liu Xiaobo when he was an acerbic literary critic and university lecturer in Beijing in the 1980s. 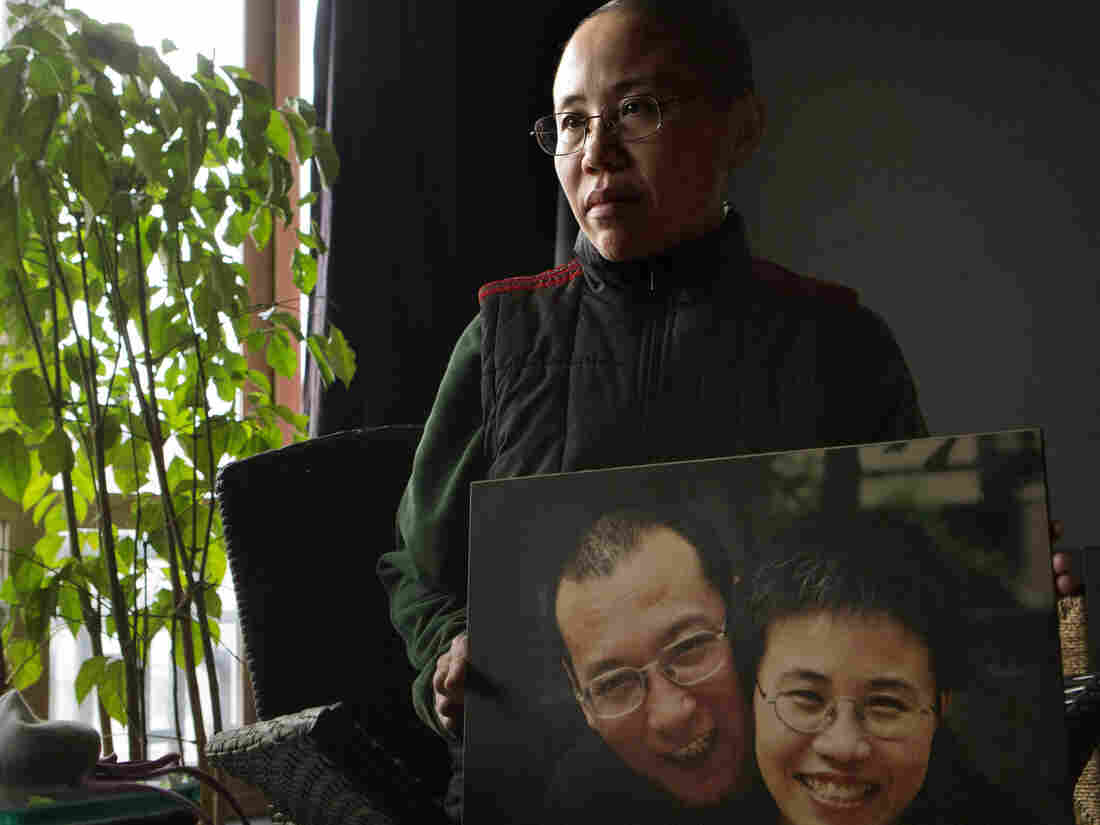 Liu Xia held a photo of herself and her husband during an interview at her home in Beijing in December 2012. Ng Han Guan/AP hide caption 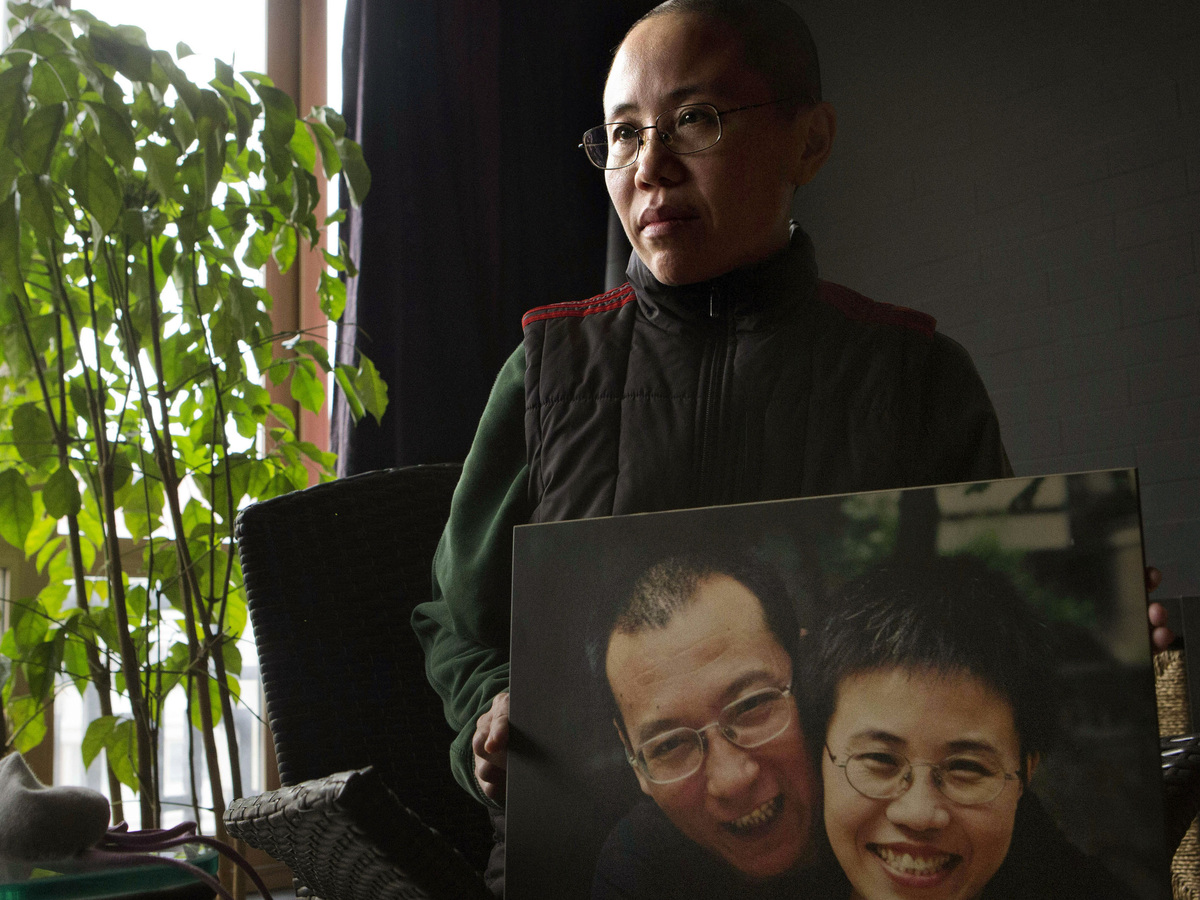 Liu Xia held a photo of herself and her husband during an interview at her home in Beijing in December 2012.

He played a leading role in the 1989 Tiananmen Square democracy movement. He led students on a hunger strike, and later negotiated with troops to let some students exit the square safely, preventing more possible bloodshed after soldiers opened fire on protesters.

The couple married in 1996, while Liu was serving a sentence in a labor camp — his second of four incarcerations.

His fourth and final prison stint started in 2009, after his participation in the Charter 08 movement calling for democratic reforms and an end to one-party rule in China.

In a 2009 interview, Liu Xia told me she had always feared her husband's involvement in that movement would end badly.

"I told him that if they arrest anyone first, it will be you," she recalled. "If they search anyone's home, it'll be ours, and if anyone goes to jail to visit you, it'll be me. I said, I'm so sick of passing the days that way."

Friends say Liu Xia's isolation during her years of house arrest threw her into a deep depression. 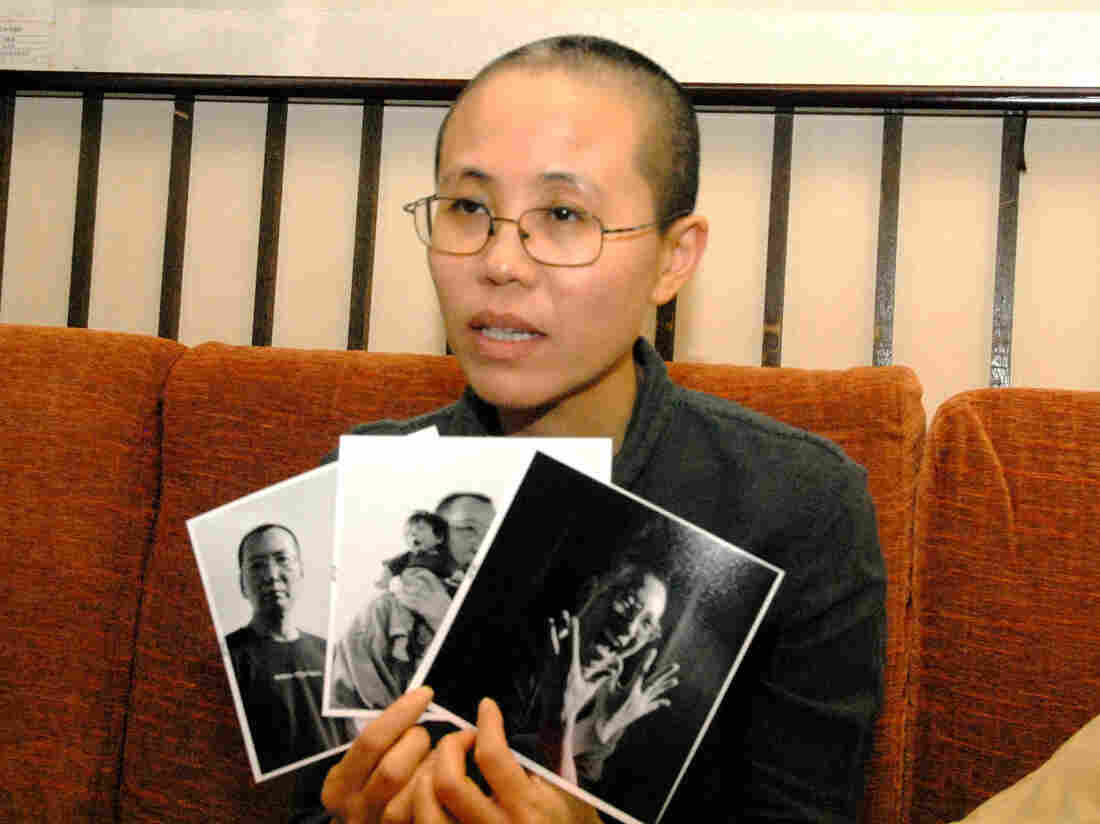 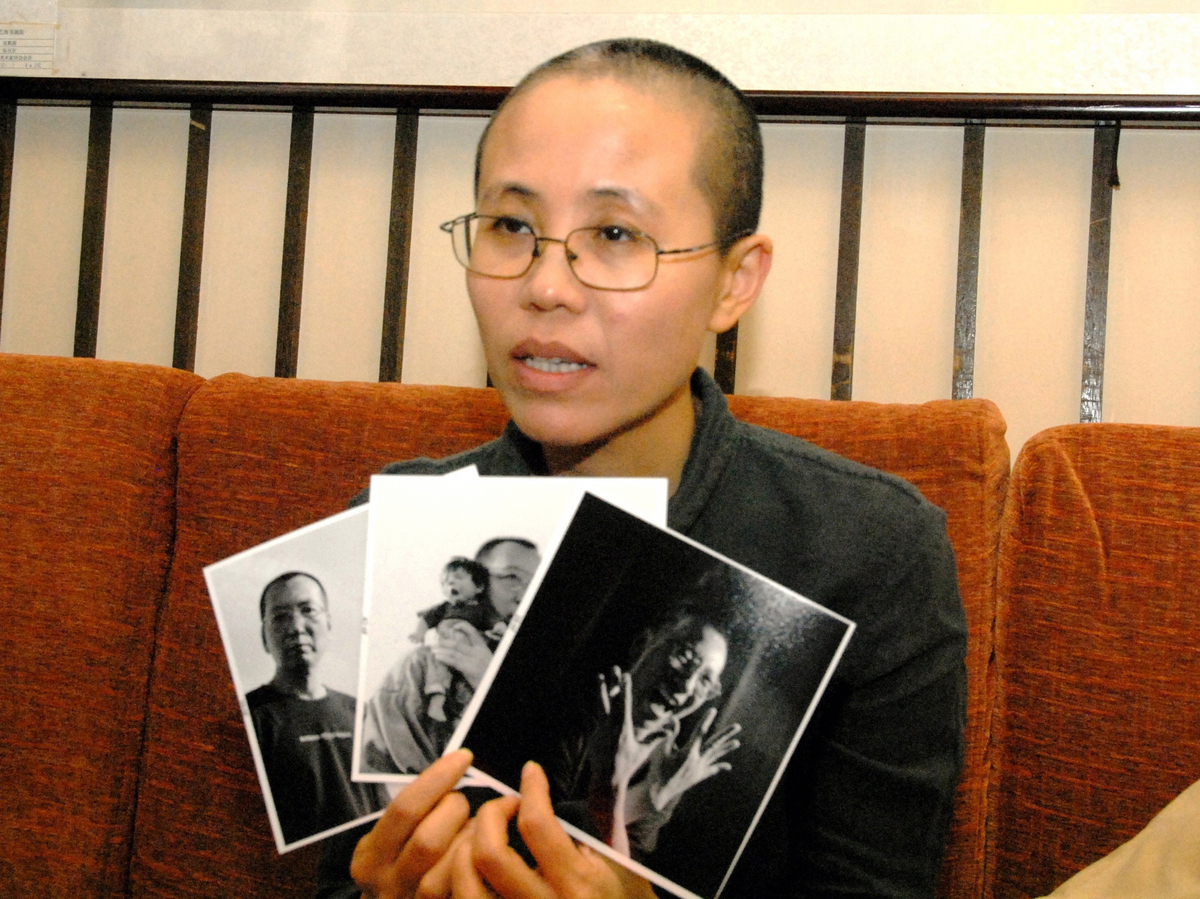 Liu Xia spoke during an October 2009 press conference in Beijing.

In 2011, the United Nations Human Rights Council Working Group on Arbitrary Detention declared that Liu Xia's house arrest was in violation of the Universal Declaration of Human Rights and called for her immediate release.

Liu Xiaobo's final wish to be given medical treatment outside China, friends say, was largely motivated by his hope that his wife might finally be liberated. In a letter he wrote in his final days, he praised the "unique wilderness of [her] creativity" and expressed regret "that I still have not been able to hold an exhibition of her work."

Wang of Human Rights Watch says that the state's treatment of Liu was designed to send a message to other dissidents — "that the state can crush you at will, and will make you pay a very serious price, including your life and your family's well-being."

Having gone to such great lengths, Beijing is hardly likely to show Liu Xia any more leniency now.

"We hope that foreign governments will step up from now on" to press for Liu Xia's release, Wang says. "But I think the trend so far does not seem very promising."