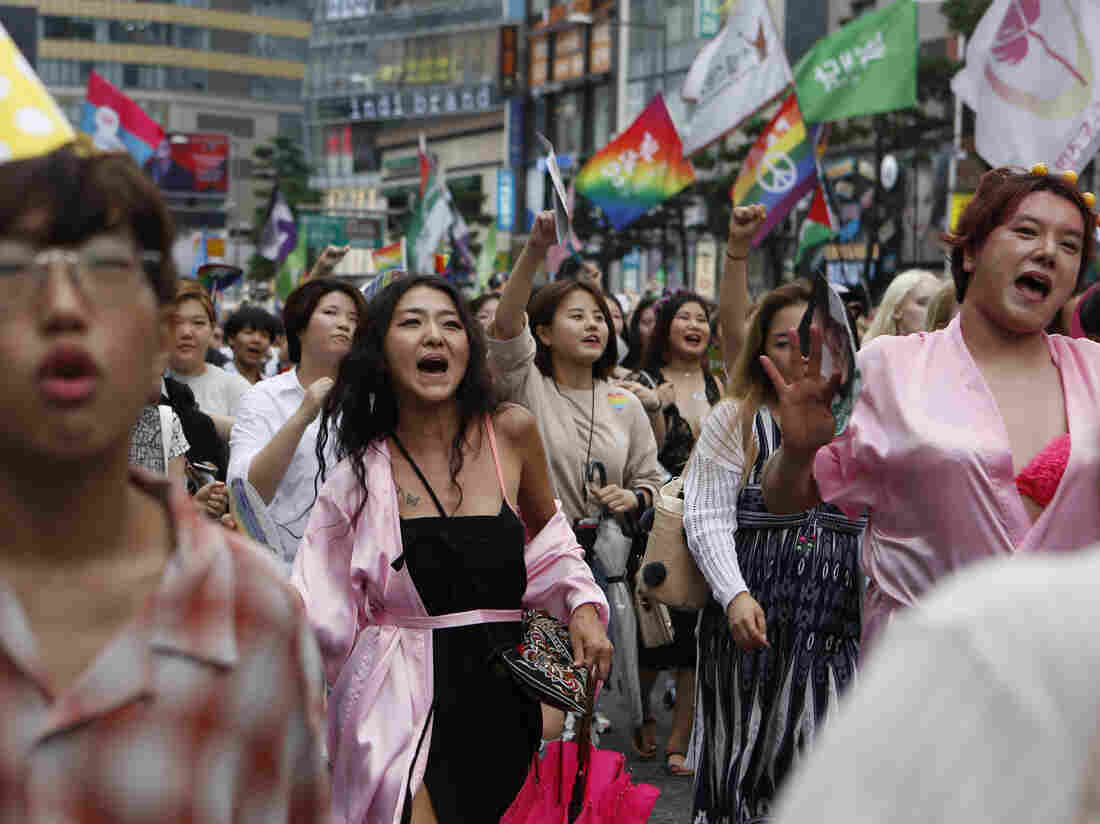 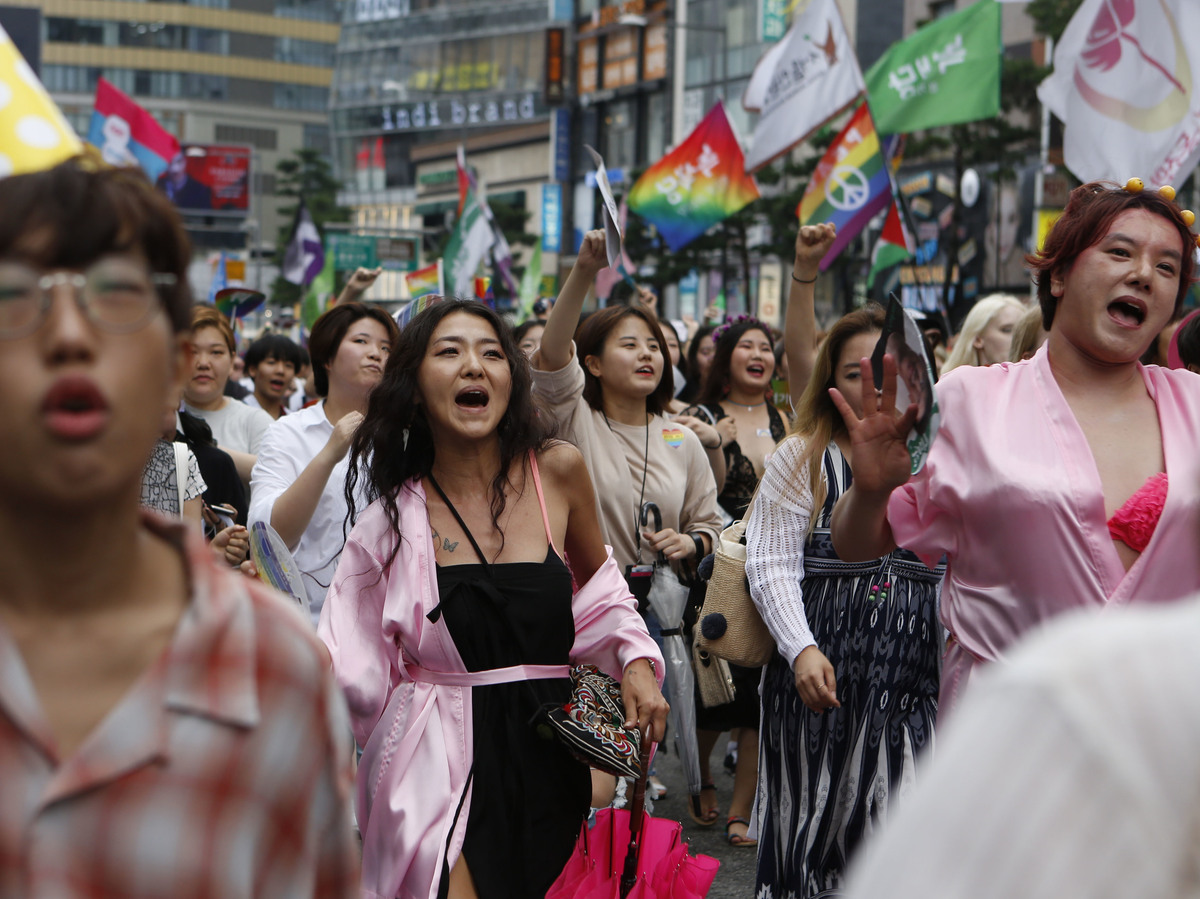 South Korea is one of the world's richest nations, a modern place with trends changing as fast as its Internet speeds. But when it comes to some social issues, the country has been slow to change — especially for gays and lesbians.

While there are shows of support — this month, a record 85,000 people turned up at Seoul's annual pride festival, for example — recent events indicate South Korea's institutions and political class are only reluctantly tolerating sexual minorities.

Taiwan's High Court Rules Same-Sex Marriage Is Legal, In A First For Asia

"We have to get more sexual minorities to vocalize their opinions and feel safe to come out of the closet," said theater actor Lee Sang-hoon, a gay man who goes by the stage name Summer.

His troupe was in the parade and dressed in lingerie for a skit at its booth. It was one of the 110 exhibitors at Seoul's pride fest, which was — as in previous years — protected by barriers and lines of police.

It felt like a party inside the plaza. But outside, thousands of anti-gay Christian protesters demonstrated against the pride celebration, chanting slogans and blasting Korean-language gospel music.

"You have the rather angry protesters, broadcasting their music across here, trying to compete with the party atmosphere on the inside," says Phillip Kendall, the political secretary at the British Embassy in Seoul, which supports the pride festival with a booth every year.

Kendall says it will take time for Korean society overall to celebrate diversity.

"They still have a conservative view in this country to what life should be and what society should be," he says.

There have been some gains for members of the LGBT community in East Asia — Taiwan recently OK'ed same-sex marriage, for example.

But South Korea still criminalizes it. And this spring, for the first time, the military enforced a longstanding ban on homosexual activity and sentenced a gay soldier to six months in jail for having consensual sex with another soldier in a private place. Amnesty International called this part of "an outrageous military gay witch-hunt." 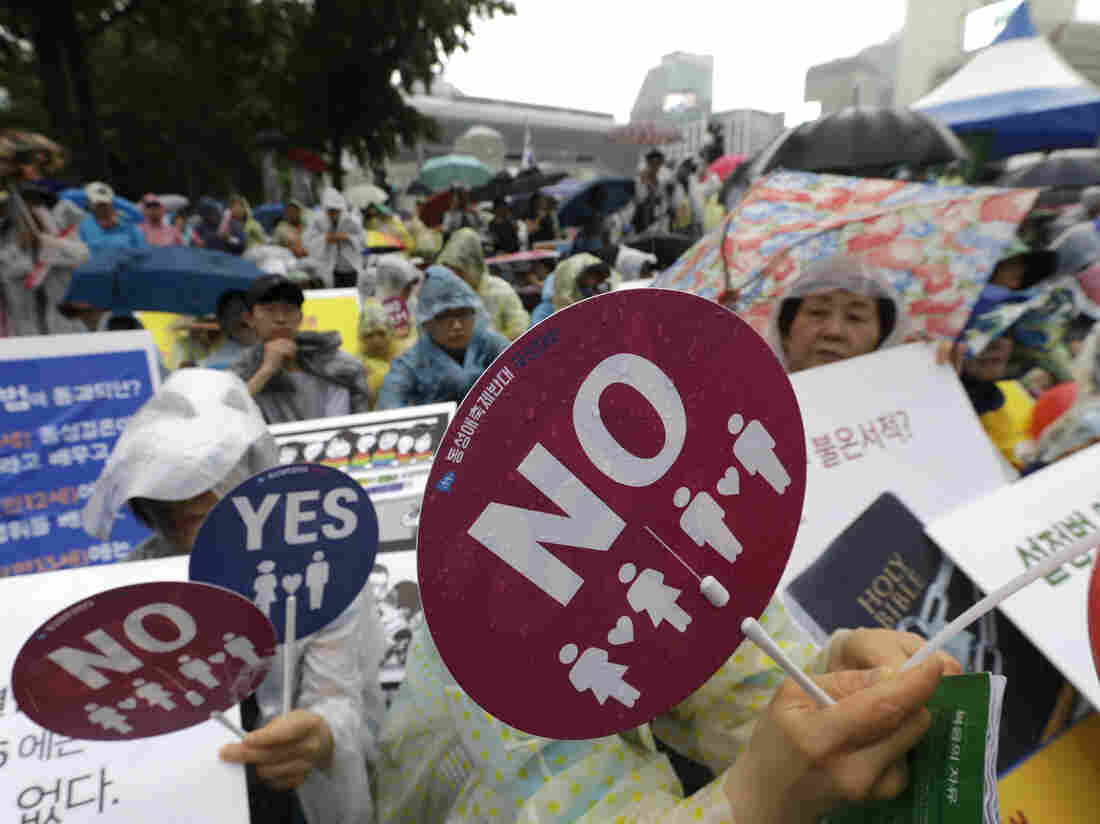 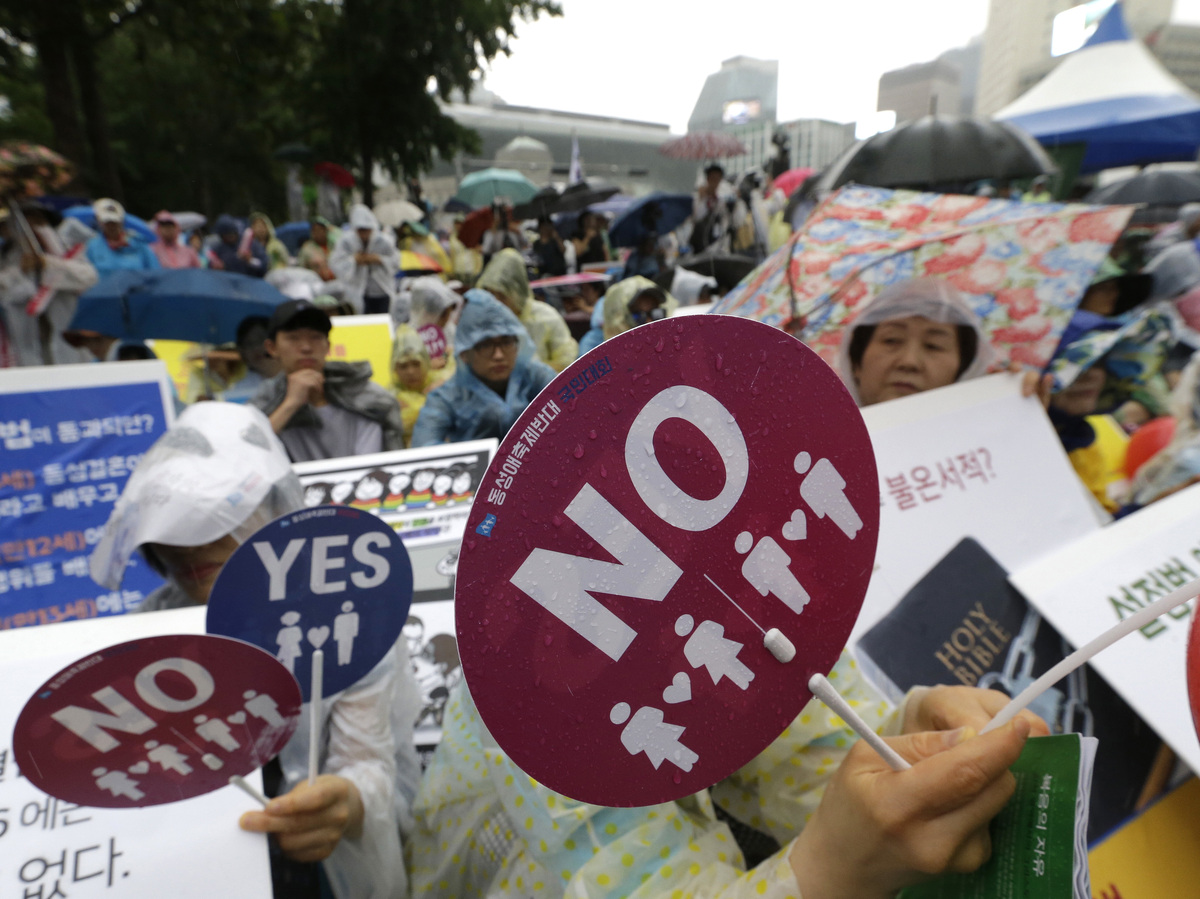 Donghuan Kim, a volunteer with a nonprofit called Military Human Rights Korea that's working to try and change the law, says he was "horrified" by the gay soldier's sentencing. "Younger generations are very open-minded and trying to accept homosexual community to the major society," he says. "But there are 10 million Christians out there. They're very, very homophobic."

His estimate of South Korea's Christian population is actually low, as it has grown over the years. Nearly a third of all 50 million Koreans identify as Christian, and they make up a powerful lobby for traditional values.

"Christians make up a huge part of South Korea's public life and they have taken a big role in Korea's modernization. We feel that because homosexuality goes against biblical teachings, it's emotionally unacceptable to the public," he says.

He also cites South Korea's birth rate — the lowest among the world's richest nations — as a reason why he's against same-sex couples.

"As a result of homosexuality, there is no birth," he says. "And relationships are distorted and destroyed."

South Korea's new president, Moon Jae-in, hails from a progressive party. But when he was pressed during the campaign, he, too, said he opposed homosexuality.

After an outcry, Moon, who is Catholic, apologized — kind of. He said he shouldn't have been judgmental.

Kendall, the British diplomat, says foreign advocates of LGBT rights shouldn't be judgmental, either. "All of our countries went through this years ago," he says. "So we cannot have a holier-than-thou attitude when it comes to these issues. But we try to explain how we got over the issues which Korea is experiencing today."

He and other LGBT rights supporters in South Korea say certain things are making a difference: a pride festival that grows bigger every year, rising international pressure on Korea from the diplomatic community in Seoul and regional neighbors making progress. Parts of Tokyo, like Taiwan, have OK'ed same-sex unions.

He and his troupe are dressed in their faux-silk bathrobes for a reason. Later in the day, they all shed those robes during a performance — an artistic expression of coming out. In a country where homosexuality is considered taboo, their radical act is simply being themselves.