Accessibility links
After Pakistani Prime Minister Nawaz Sharif's Disqualification, What's Next For Pakistan? : Parallels Sharif served as Pakistan's prime minister three times since 1990, and now has been removed from office three times. In the country's 70-year history, no prime minister has completed a five-year term. 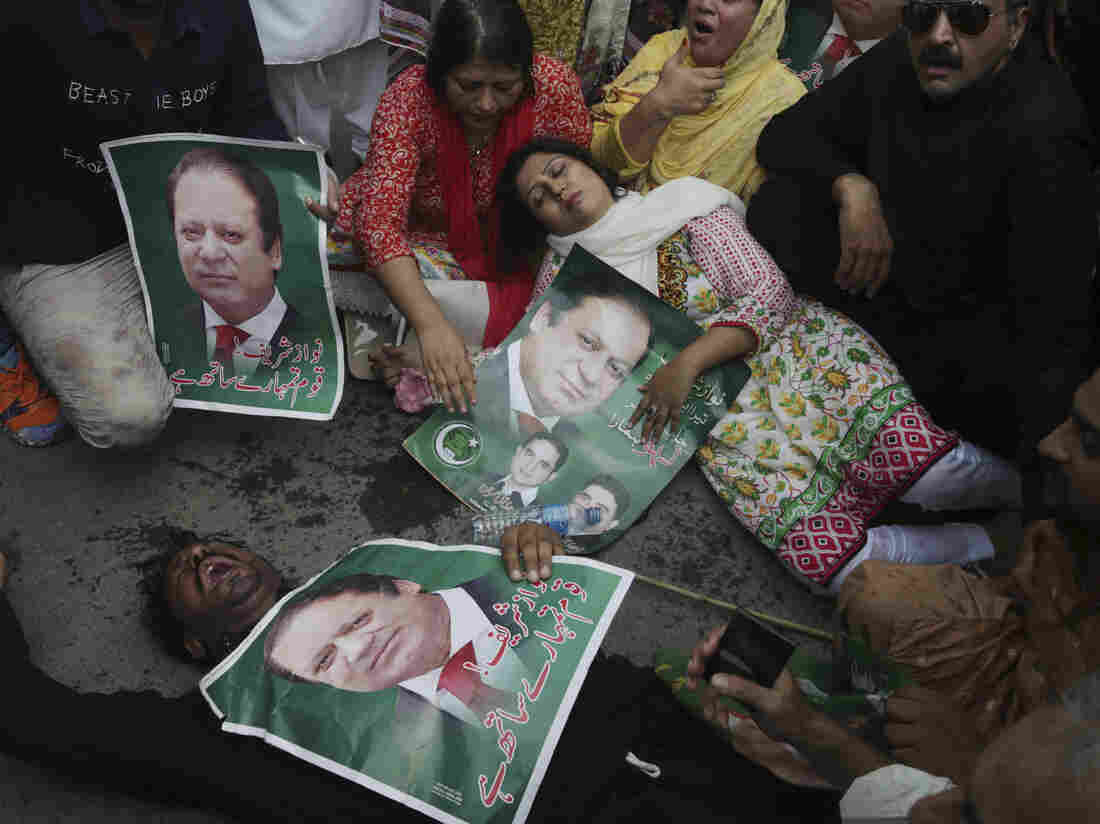 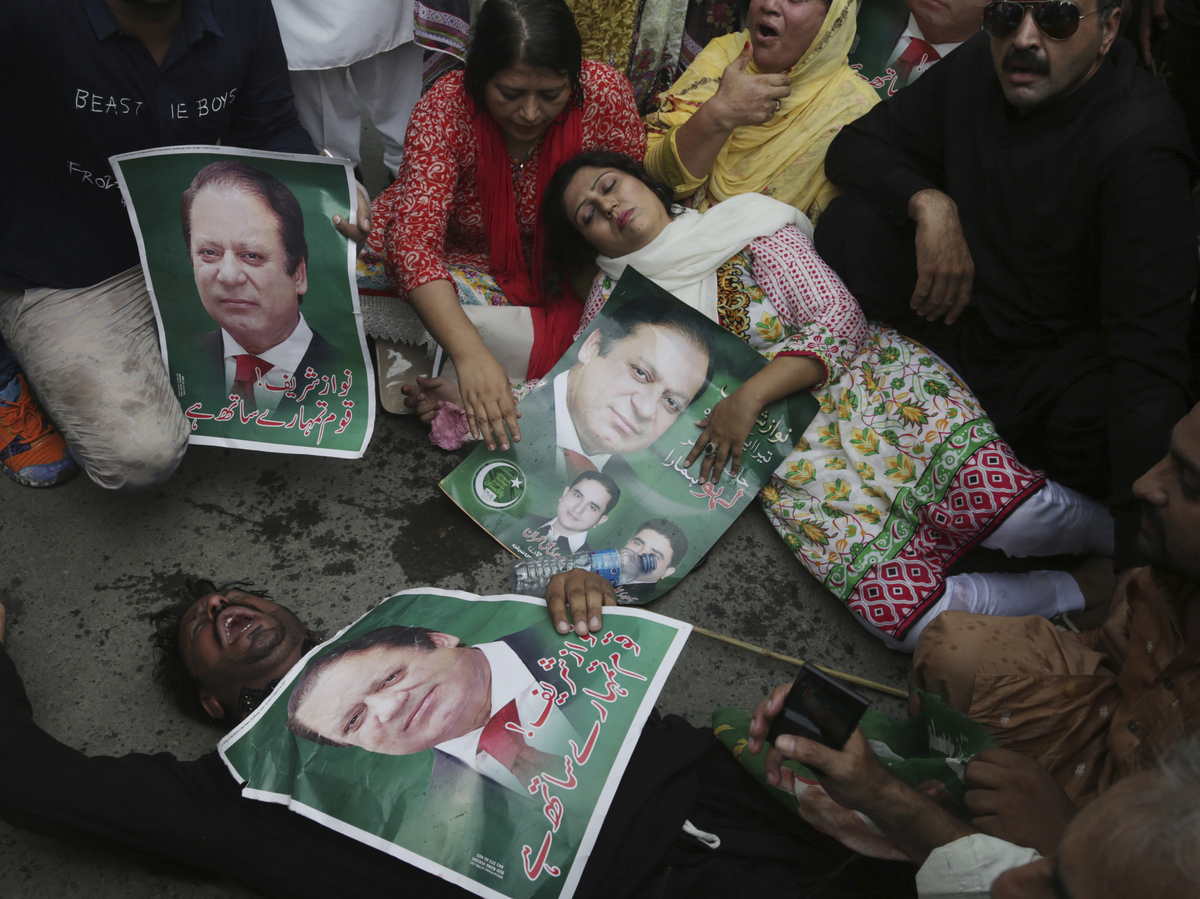 Nawaz Sharif's supporters protested his ouster in Lahore on Friday.

Nawaz Sharif, who served until Friday as the 18th prime minister of Pakistan, is no stranger to his country's courts. In three tumultuous go-rounds as premier over the past 27 years, he's been embroiled repeatedly in judicial cases on charges ranging from corruption and contempt to terrorism and treason.

Sharif, 67, resigned Friday after the Supreme Court disqualified him from holding office, ruling he was not "honest." The justices' unanimous decision was the culmination of more than a year of corruption investigations related to Panama Papers revelations that pointed, among other things, to luxury real estate holdings by Sharif family members in London — though the official reason for his disqualification hinged on an unrelated technicality.

Sharif now holds the dubious distinction of being removed, in turn, by his country's president (in 1993), its military (in 1999) and its highest court. But ousted prime ministers are the norm in Pakistan. In the country's 70-year history, none of its elected leaders has ever succeeded in completing a five-year term. 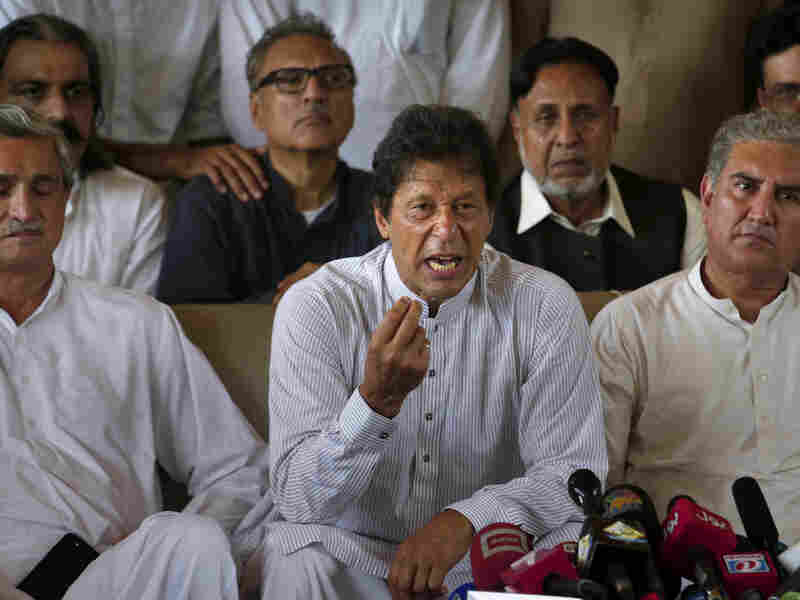 Pakistani opposition leader Imran Khan, center, addresses a news conference regarding the dismissal of Pakistani Prime Minister Nawaz Sharif in Islamabad on Friday. Opposition lawmakers, who petitioned the court for disqualification of Sharif, welcomed the court decision, saying it was a victory for justice. Anjum Naveed/AP hide caption 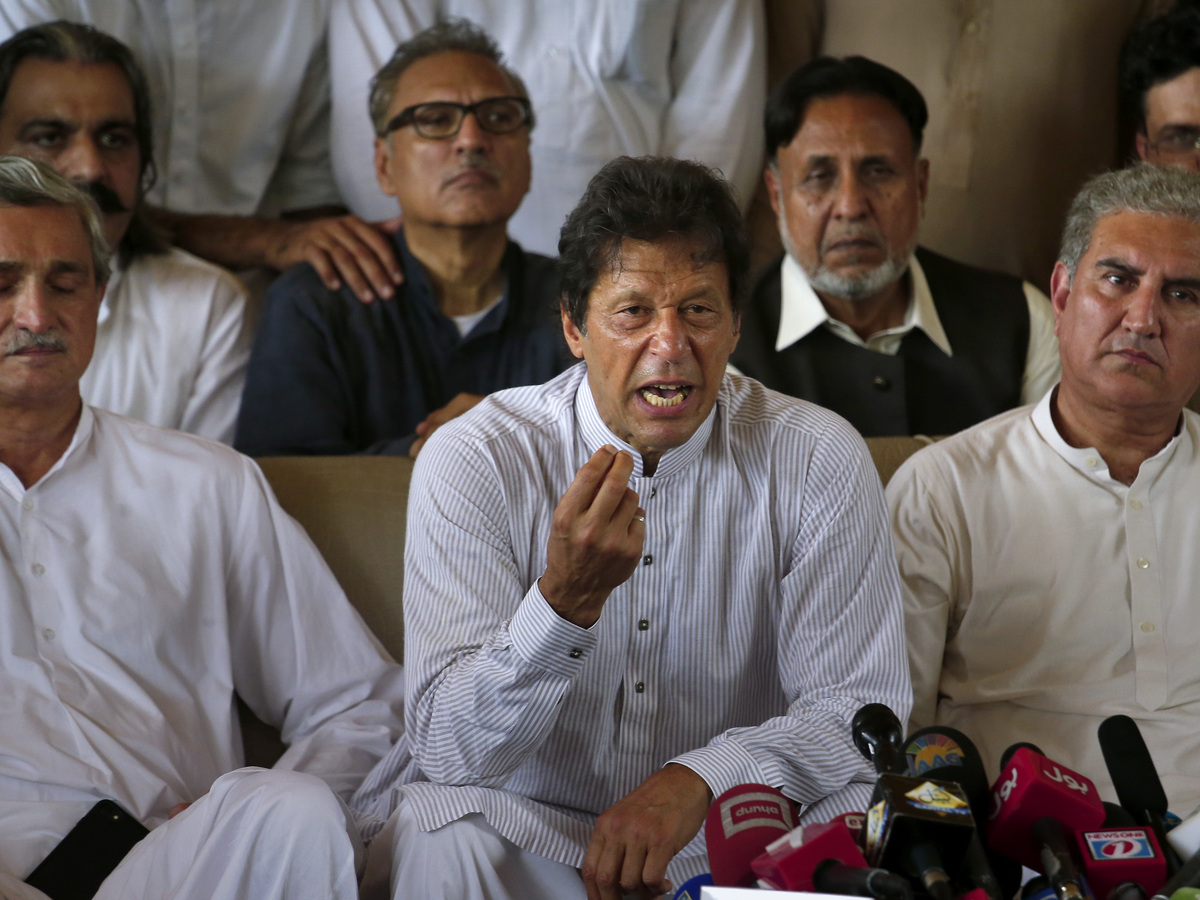 Pakistani opposition leader Imran Khan, center, addresses a news conference regarding the dismissal of Pakistani Prime Minister Nawaz Sharif in Islamabad on Friday. Opposition lawmakers, who petitioned the court for disqualification of Sharif, welcomed the court decision, saying it was a victory for justice.

In 1997, while facing corruption and contempt of court charges during his second term as prime minister, Sharif managed to turn the tables and ousted both Pakistan's chief justice and president. Three years later, the tables had turned on him: A court in Karachi convicted Sharif on hijacking and terrorism charges after he'd tried to force out Pakistan's army chief, Gen. Pervez Musharraf, in October 1999.

Rather than spend years in jail, Sharif opted for exile in Saudi Arabia. He returned to Pakistan in 2007 and was elected to his third term as prime minister in 2013. He came closer to completing this term than any in the past, with less than a year to go until general elections scheduled for the summer of 2018.

So what's next for Sharif — and his country?

The big immediate question — for which there's no clear answer — is who will become Pakistan's new prime minister, an interim figure to take the country up to elections next year. Any possible candidates must be drawn from the National Assembly.

There's also speculation that Sharif's brother, Shahbaz Sharif, now the chief minister of Punjab, Pakistan's biggest and most influential province, could take the reins. He's a palatable figure to many Pakistanis, according to a Gallup Pakistan poll from last week — but since he's not a parliamentarian, he'd have to resign his current post and seek election in the National Assembly before he could become a candidate for interim leader. 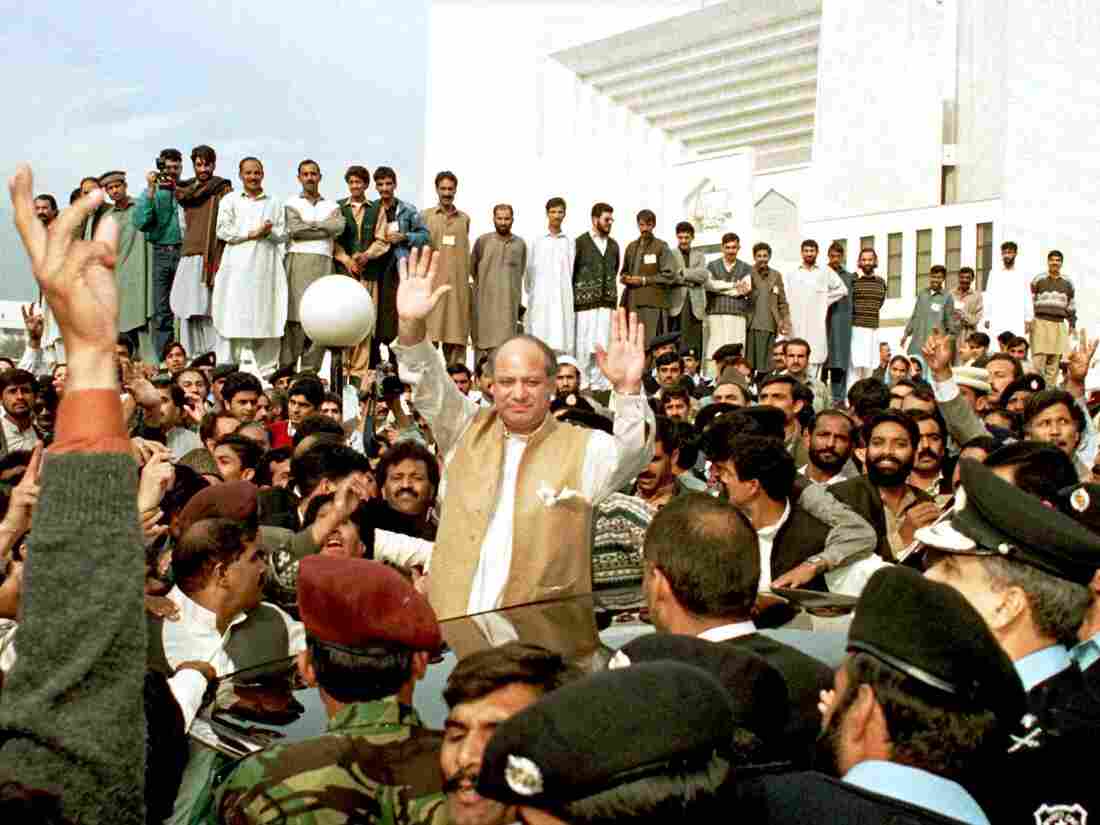 In 1997, Nawaz Sharif faced contempt charges in Pakistan's Supreme Court, where he waved to supporters after appearing before the judges. His supporters later stormed the court and both the chief justice and president were ousted from office. M. Khursheed/Associated Press hide caption 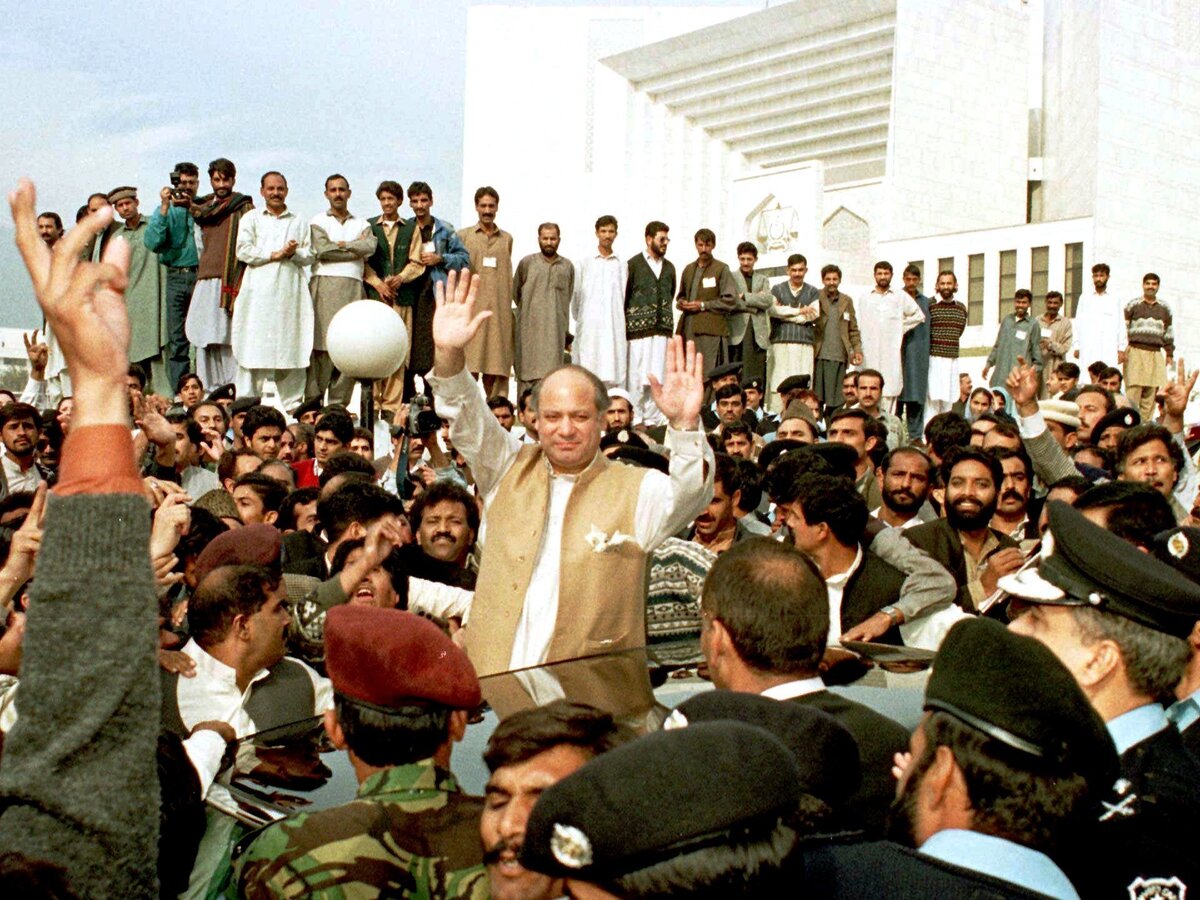 In 1997, Nawaz Sharif faced contempt charges in Pakistan's Supreme Court, where he waved to supporters after appearing before the judges. His supporters later stormed the court and both the chief justice and president were ousted from office.

The future of Nawaz Sharif's daughter, Maryam Nawaz, long seen as his political heir, is now in doubt because of her involvement in the court case that led to her father's resignation. At the Supreme Court's request, she and other family members, including her father, will be facing additional cases in separate "accountability" courts.

While Khan undoubtedly benefits from Friday's court decision, not everyone sees things as he does. For now, Sharif will remain head of his Pakistan Muslim League-Nawaz party. His supporters, including his daughter, insist he's been through worse setbacks and always comes back. But his ouster on Friday is seen as destabilizing.

Sharif's term as prime minister was a period marked by economic growth, infrastructure expansion, a drop in poverty and increased cooperation with China. Until recently, Pakistan's stock market out-performed all others in Asia.

A businessman turned politician, Sharif has also long favored better ties with India, including trade – a priority on which he and Pakistan's powerful military have never seen eye-to-eye. Sharif has had a long and complicated relationship with the military, first coming to political prominence under the wing of a military dictator in the 1980s (the same one who made it a constitutional requirement for elected leaders to be "honest") but then overthrown in a coup a decade later and entering an uneasy detente with military leaders since his return from exile. He appointed Gen. Qamar Javed Bajwa as army chief last November.

Concerns have been raised that Pakistan's judiciary may have been vulnerable to manipulation in Sharif's case. Judges in Pakistan "have typically joined forces with the military by using allegations of corruption against disobedient prime ministers," writes University of Oklahoma professor Aqil Shah in the New York Times.

"Mr. Sharif's crime seems to be ... crossing the military by pursuing conciliatory policies toward India as well as Afghanistan and by reportedly demanding that Inter-Services Intelligence end its use of militant groups as tools of foreign policy," writes Shah, the author of The Army and Democracy: Military Politics in Pakistan.

Meanwhile, it's an irony lost on no one that the Supreme Court's justification for disqualifying Sharif on Friday centered not on any ill-gotten gains, but instead on income Sharif apparently never even received. As chairman of a business owned by one of his sons in the United Arab Emirates, Sharif was entitled to, and required to declare, a salary — but his lawyer said he took none.