Accessibility links
Poland Clashes With European Union Over Logging In Primeval Forest : Parallels Warsaw's populist government has approved large-scale logging in the ancient Bialowieza Forest, despite an injunction by Europe's highest court. The forest is a World Heritage Site. 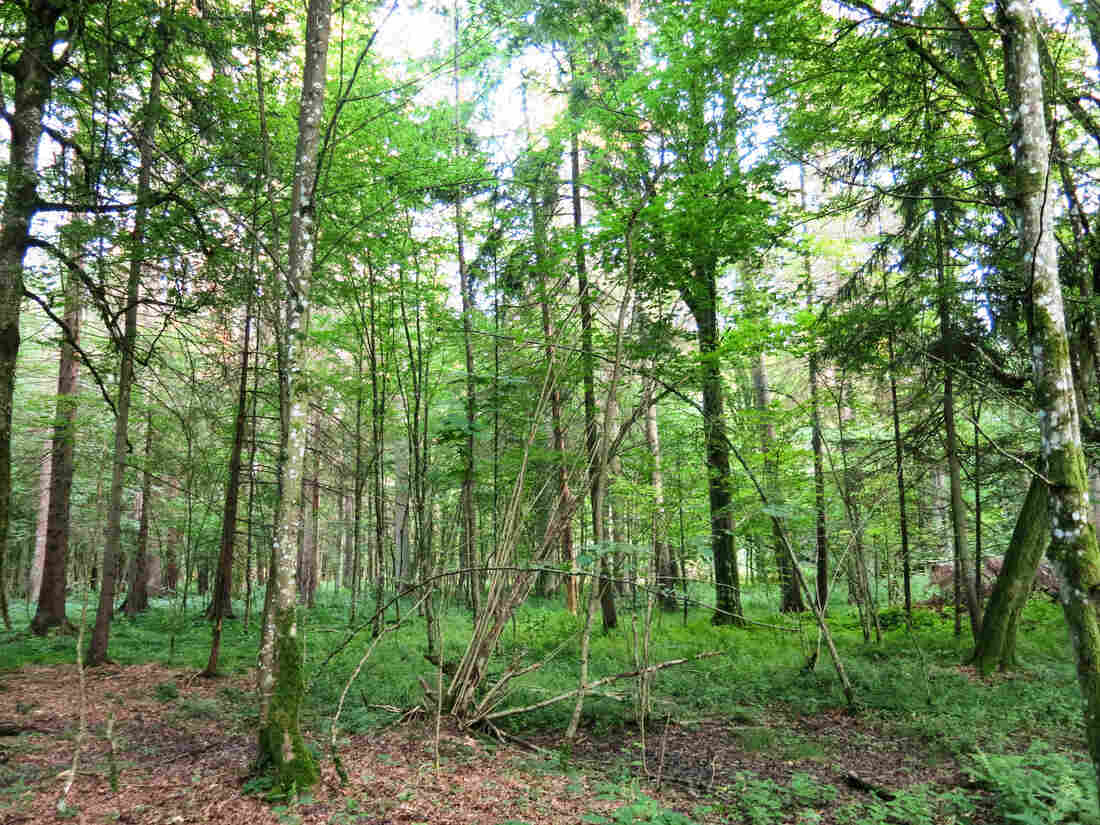 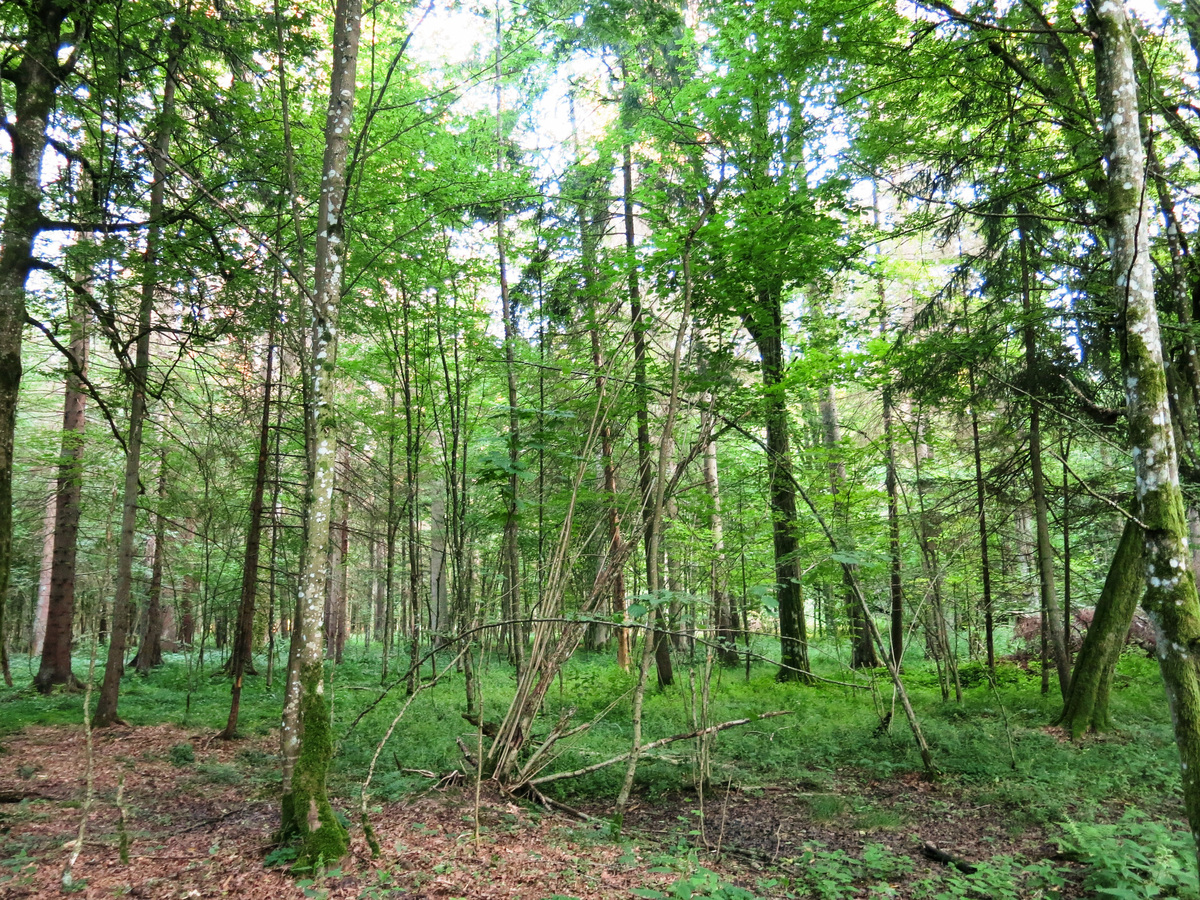 The lush, green canopy that is Bialowieza Forest spans 350,000 acres between Poland and Belarus. It's a UNESCO World Heritage Site that is home to a variety of endangered species like the European bison, which is slightly larger and leaner than its American cousin.

It also has some of the last old-growth forest in Europe, untouched by human hands, and there is a great deal of international interest in preserving the forest's delicate ecology.

Polish journalist, author and naturalist Adam Wajrak said he never tires of seeing the complex life cycle in this forest up close.

"Look at there, here, you see?" he asked me, pointing to the top of a dead spruce trunk during a recent hike. "This is the little spruce growing on the body of dead spruce, this very often happens."

He peeled back the top layer of another dead trunk.

"If you look under the bark, there's a lot of beetles, a lot of spiders — everything, whatever you want, and this is how it works," he says. "This is why I compare the Bialowieza Forest to coral reef — because in coral reef, a lot of life is based also on the dead corals. So this works like that." 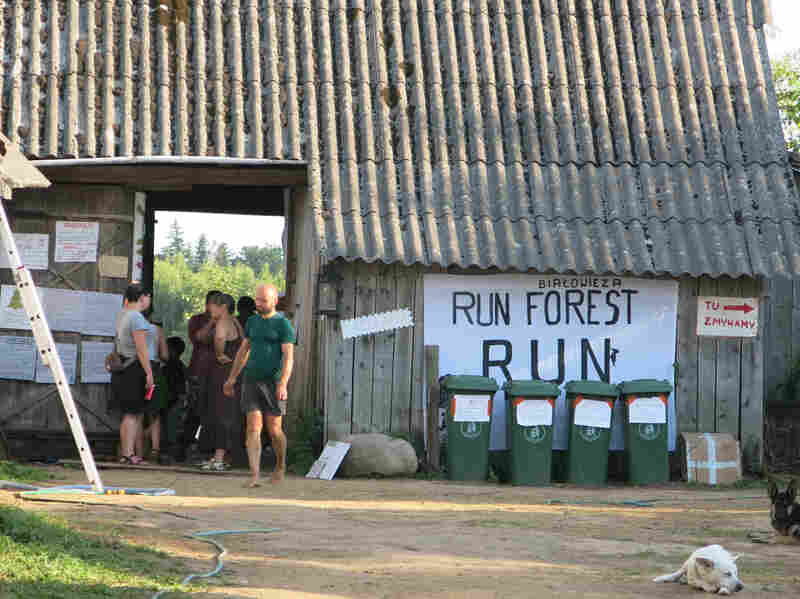 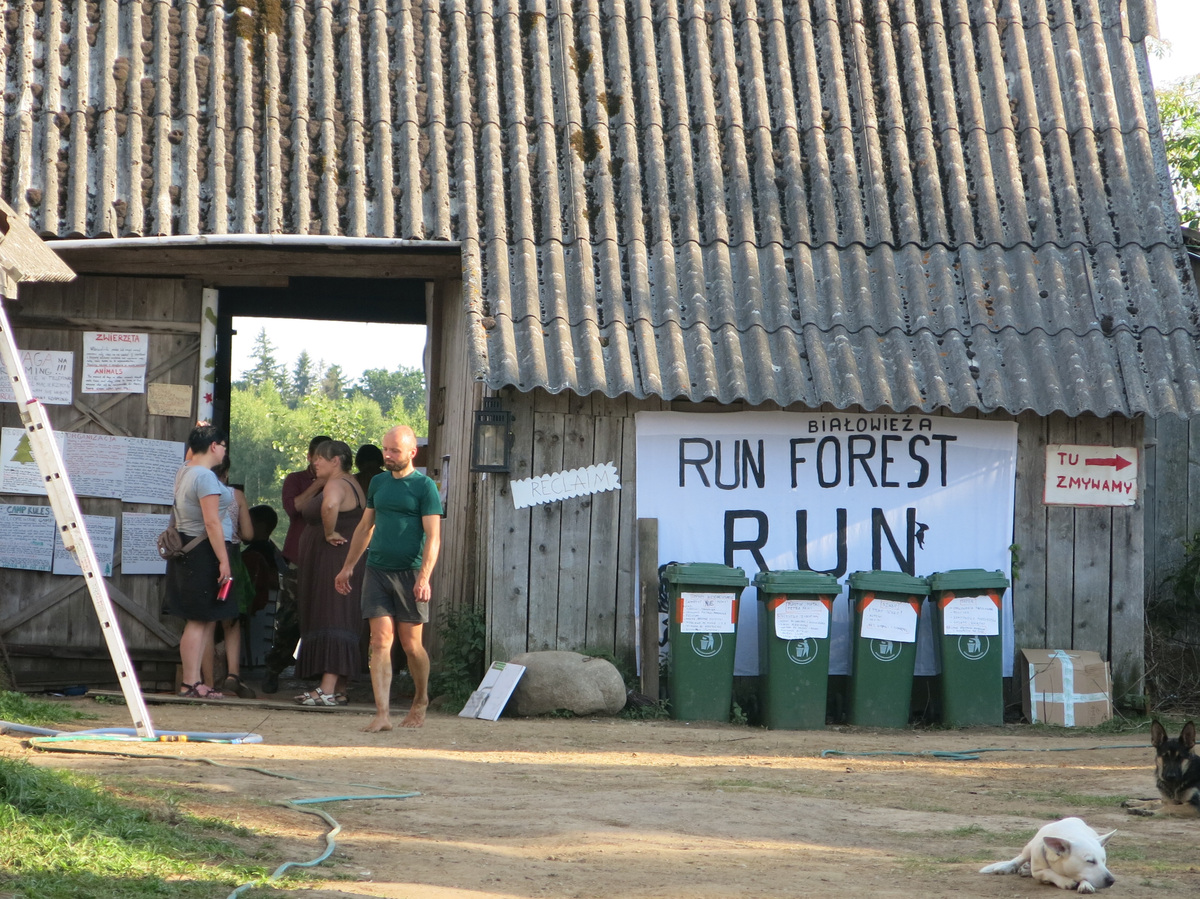 The camp outside Białowieża National Park where environmental activists are staying as they try to stop loggers. They've hung a sheet that says: "Bialowieza, Run Forest Run" playing on the popular Tom Hanks movie "Forrest Gump."

He says the forest must not be left to its own devices and that infected trees and those around them must be cut down. Last year, he approved a plan that triples the amount of logging in parts of the forest. It sparked an international outcry.

Foresters are planting less vulnerable oak saplings to replace the trees they are logging but that hasn't appeased critics, who complain the replanted woodlands look like man-made tree farms.

The Ministry of the Environment isn't budging on its claim that only human intervention can save this forest. It defends its plan on its official website, noting in big letters at the end: "We'll see who is right."

Agiejczyk blames the bark beetle proliferation in the Bialowieza Forest on global warming and previous reductions of logging quotas there.

"The [Polish] foresters are here since 90 — almost 100 — years, and look how beautiful the forest is," he says. "This kind of criticism that says we are harming it is absurd, we did not do anything wrong."

The European Union's highest court is siding for now with the Polish government's opponents, who argue the beetle infestation must be left to nature. The European Commission — which is the EU's executive arm and is leading the legal action in the Court of Justice case — argues the Polish logging violates the bloc's wildlife protection laws.

On July 28, the court imposed a temporary injunction against logging in Bialowieza Forest to protect the trees while the case is being decided. But Szyszko said on July 31 that Poland won't abide by it, and that logging – which he referred to as "protective measures" for the forest – would continue.

Should Poland lose the case before the European Court of Justice, it could face fines of more than $4.7 million, plus possible penalties of around $350,000 each day.

Meanwhile, environmental activists are not waiting for officials. They've descended on Bialowieza Forest from around Europe in recent weeks to try and block the loggers.

Joanna Bienkowska, 30, of Greenpeace, is one of the activists who recently moved into a camp near the forest with other protesters. They've hung up a sheet that says "Bialowieza: Run, Forest, Run," playing on a line from Forrest Gump.

Bienkowska said she and the other activists spend their days hiking, biking and driving around the forest with maps, binoculars and GPS devices in search of the mechanical harvesters that cut down as many as 200 trees each day.

Fellow activist Marcin Skopiński, a university student in cultural and social anthropology from Warsaw, says he recently helped form a human blockade that chained itself to a forest harvester. 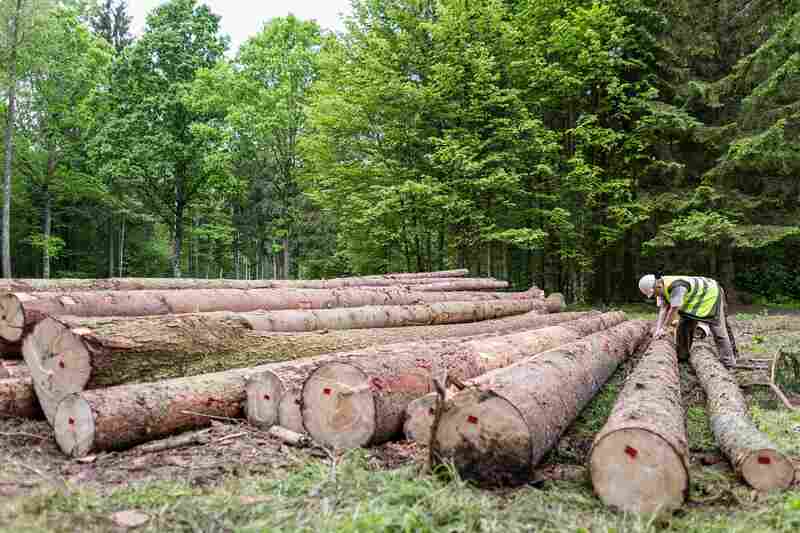 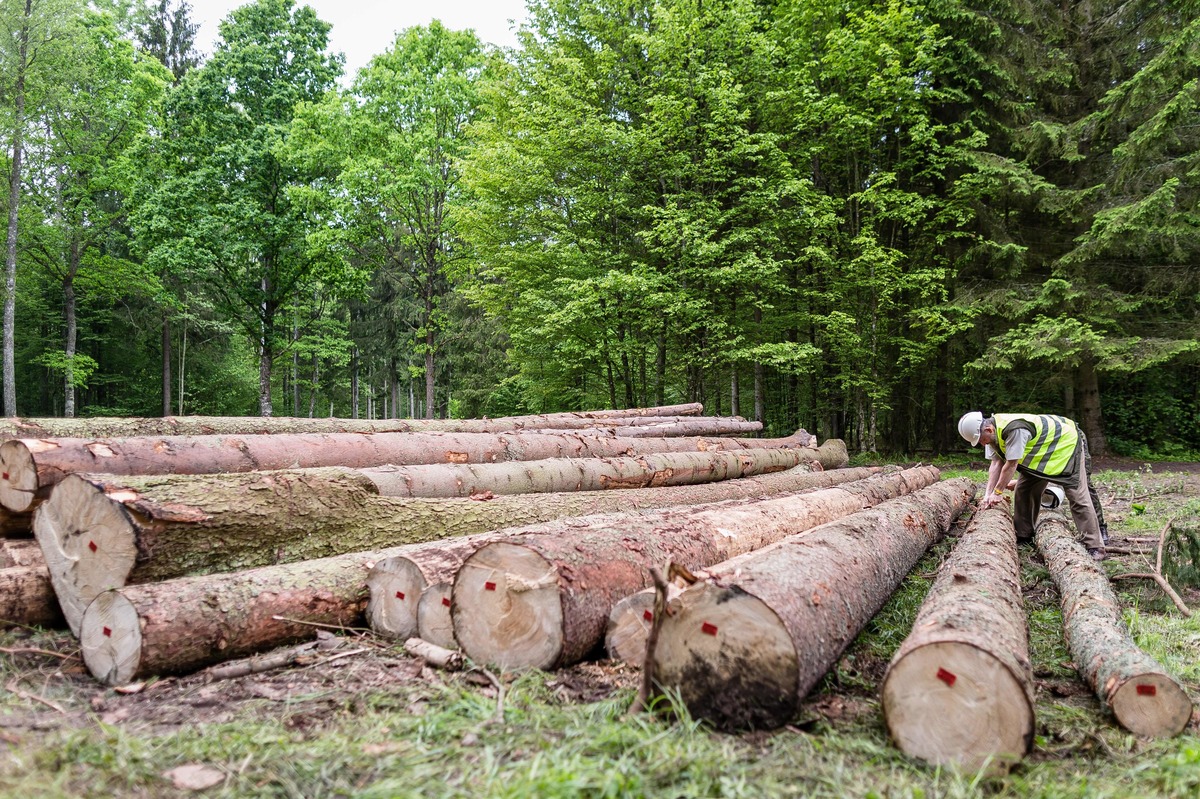 Deputy superintendent of the Hajnowka Forest District cuts of bark of spruce to find woodworm and woodworm larvas in Białowieża National Park.

"During patrols, I've see a lot of places where logging [is] taking place and it's a very sad thing to see," says Skopinski, 25. "Like some of the parts are looking like a storm came in or some huge destruction happened."

The activists say it's increasingly difficult to get to the harvesters because of the armed foresters, scores of whom are being sent here from around Poland to protect the logging operations.

But what they show me is the aftermath of the logging. Felled trees stripped of their bark and bearing the harvester's signature gouges are piled high along roads and trails, where trucks will haul them away.

Nearby, dozens of other trees are marked with fluorescent pink dots. They will be cut down next.