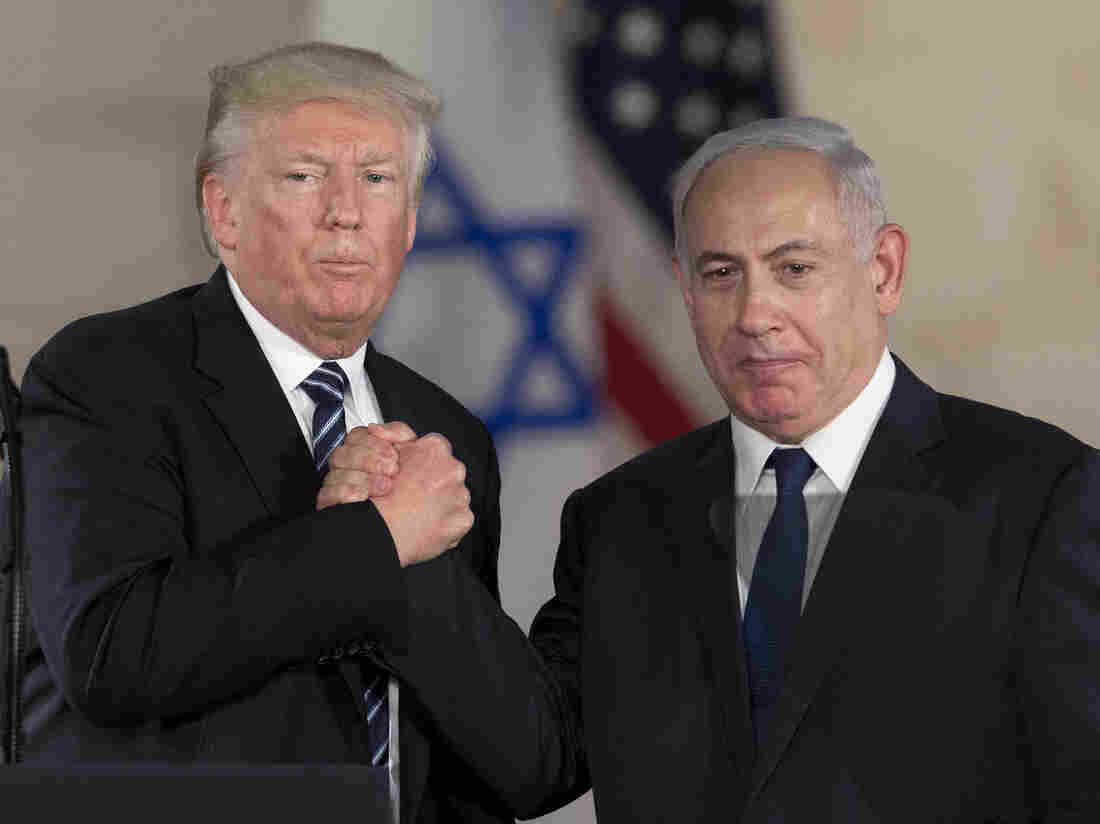 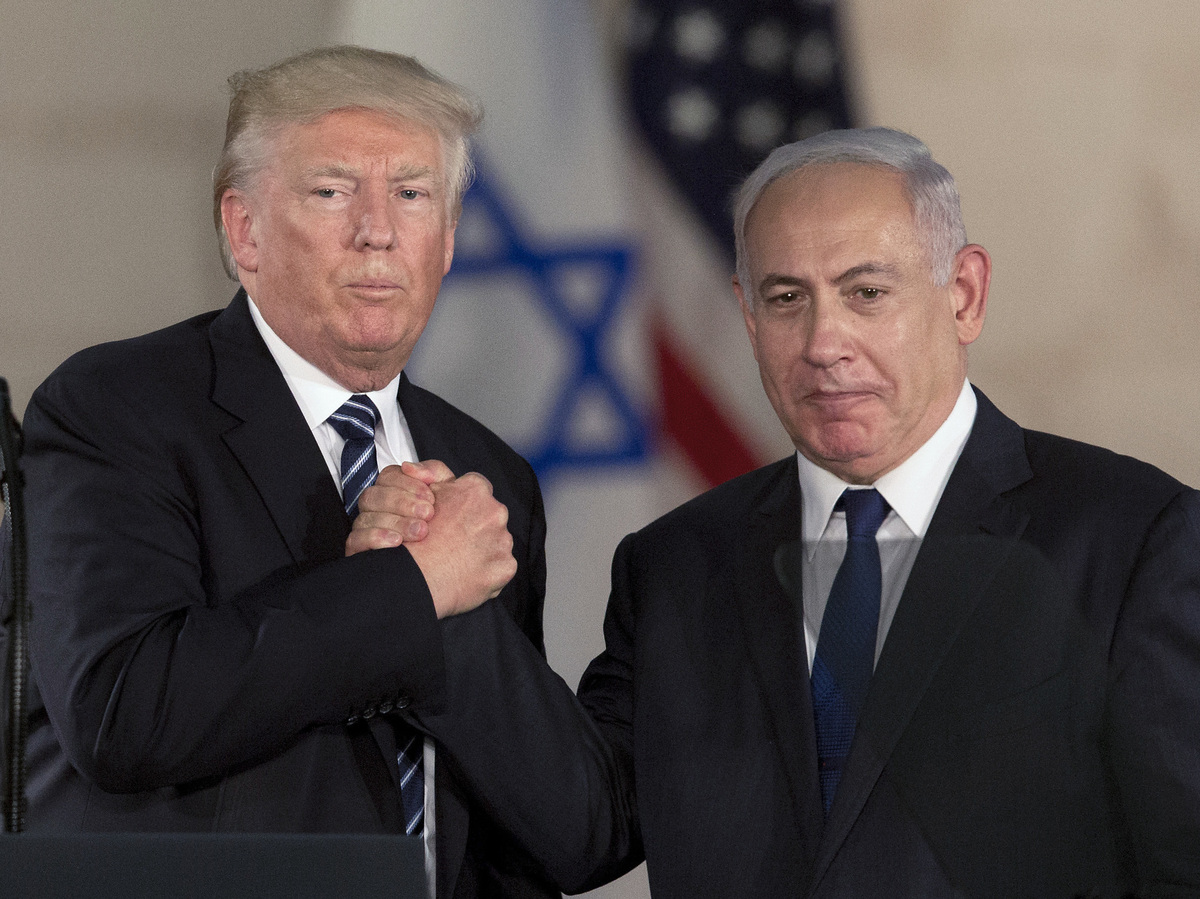 President Trump and Israeli Prime Minister Benjamin Netanyahu shake hands in Jerusalem in May. Some critics say Netanyahu responded cautiously to the Charlottesville rally because he wanted to avoid angering Trump.

President Trump is not the only world leader facing criticism for a delayed condemnation of Saturday's white nationalist march in Charlottesville, Va.

For three days, Israeli Prime Minister Benjamin Netanyahu — an outspoken critic of anti-Semitism around the world — said nothing about the anti-Jewish chants and Nazi swastikas paraded in Charlottesville.

Only after Trump delivered a statement Monday against "the KKK, neo-Nazis, white supremacists and other hate groups" did Netanyahu tweet his own condemnation: "Outraged by expressions of anti-Semitism, neo-Nazism and racism. Everyone should oppose this hatred."

Outraged by expressions of anti-Semitism, neo-Nazism and racism. Everyone should oppose this hatred.

Critics pointed out that Netanyahu tweeted his statement in English — not to Israeli followers in Hebrew — and from his official "PM of Israel" Twitter account of 494,000 followers rather than his more popular personal account of 1.07 million followers.

Some called his condemnation vague.

"Guess which world leader took even longer than Trump to condemn Neo-Nazism and even then couldn't even specify where he was referring to," tweeted Anshel Pfeffer, a columnist of the liberal Israeli daily Haaretz.

In Israel, Some Wonder Where The Outrage Is Over U.S. Anti-Semitic Acts

Months ago, Netanyahu was also criticized for his muted response to the toppling of graves at a St. Louis Jewish cemetery and bomb threats to U.S. Jewish community centers.

Netanyahu had no comment on Trump's most recent remarks, in which he blamed "both sides" for the Charlottesville violence on Tuesday.

Eylon Levy, a news anchor at i24News, an Israeli cable channel, argued on Twitter that Netanyahu has responded cautiously so as not to anger President Trump.

"Israel must prioritize its own security. He looks across the seas at Donald Trump, sees a volatile president, and says, 'We need to remain on his good side,'" Levy said.

Former Israeli ambassador to the U.S. Michael Oren told Israel Radio he did not think Israel needed to demand a different response from Trump, calling it an internal American matter.

If Netanyahu's response to Charlottesville was vague, his 26-year-old son's reaction on Facebook was not.

Yair Netanyahu, who is often perceived as being groomed to follow his father's footsteps in politics, has a combative social media presence and Israeli commentators claim he plays a role in shaping his father's social media messaging and some of his political positions.

He played down the anti-Semitic displays in Charlottesville, instead focusing on counter-demonstrators affiliated with Antifa, the leftist anti-fascist group, and Black Lives Matter, calling them "thugs" who hate Israel:

To put things in perspective. I'm a Jew, I'm an Israeli, the neo nazis scums in Virginia hate me and my country. But they belong to the past. Their breed is dying out. However the thugs of Antifa and BLM who hate my country (and America too in my view) just as much are getting stronger and stronger and becoming super dominant in American universities and public life.

Other political leaders in Israel — including President Reuven Rivlin — did focus their criticism on expressions of neo-Nazism in Charlottesville.

"The very idea that in our time we would see a Nazi flag — perhaps the most vicious symbol of anti-Semitism — paraded in the streets of the world's greatest democracy, and Israel's most cherished and greatest ally is almost beyond belief," Rivlin said in a statement Wednesday.

"We have seen manifestations of anti-Semitism again and again arise across the world ... I know that the great nation of the United States of America and its leaders will know how to face this difficult challenge, and prove to the world the robustness and strength of democracy and freedom."

Justice Minister Ayelet Shaked said neo-Nazis in the U.S. should be tried in court. Yair Lapid, leader of the centrist Israeli opposition party Yesh Atid, said in a statement that "there aren't two sides" to blame and "condemnation [of neo-Nazism] has to be unambiguous."

Israel's Holocaust memorial, Yad Vashem, issued a statement Monday saying it was "very concerned by the images, hateful rhetoric, and subsequent violence" at the Charlottesville rally.

"In our post-Holocaust global society," the statement said, "there is no room for racism or anti-Semitism. The anti-Jewish ideology of the Nazis was a precursor to the eventual murderous policy and extermination of six million Jews. These images are yet another reminder that we must remain vigilant about educating the public regarding hatred and xenophobia."