Accessibility links
From Greece, A Message In A Bottle Reaches Isolated Gaza : Parallels Vacationers from England tossed the bottle into the Mediterranean. It floated nearly 500 miles and into the net of a Palestinian fisherman. 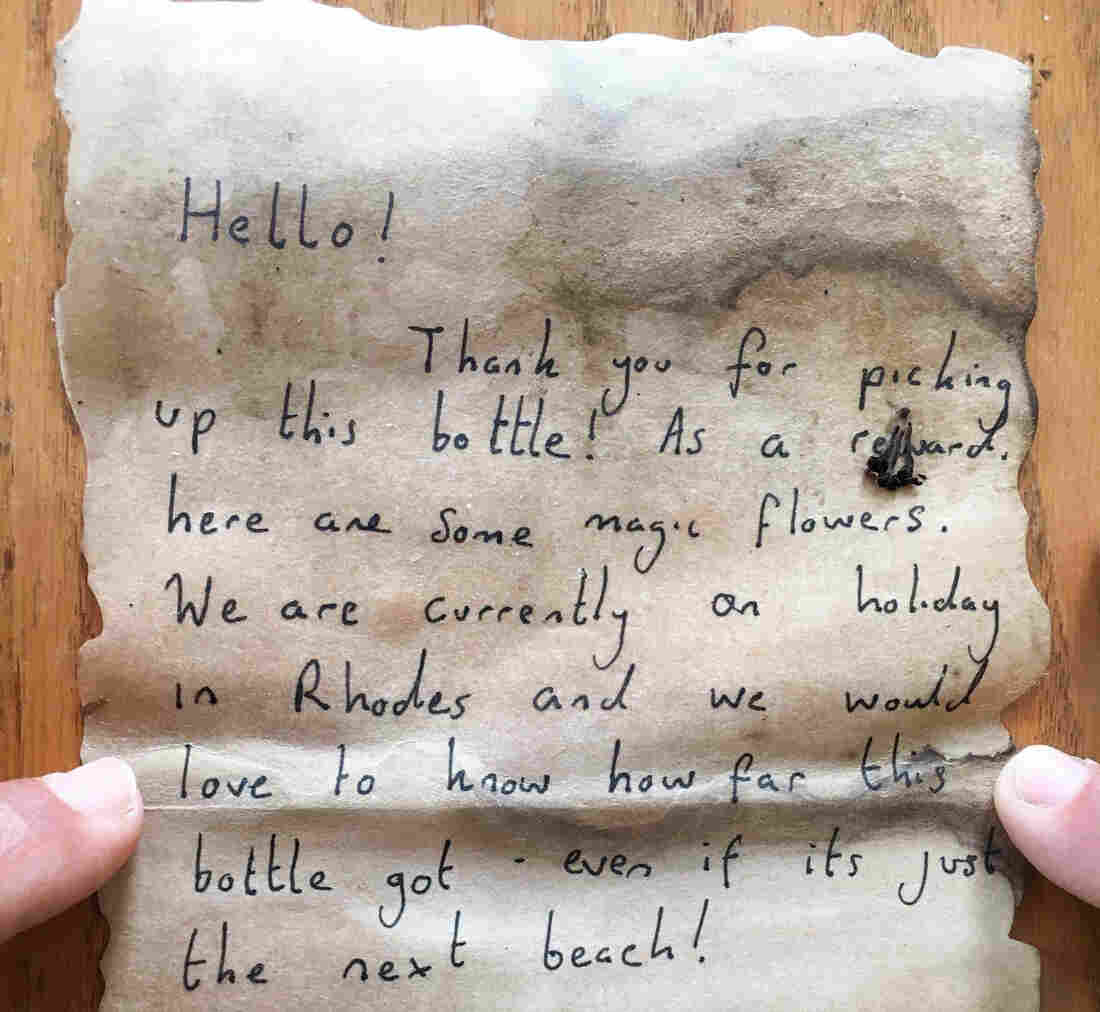 An English couple on vacation in Greece composed this note, rolled it up in a bottle and, on July 4, tossed it into the Mediterranean Sea. A Palestinian fisherman caught it in his net this week. Photo Courtesy of Wael Al Soltan hide caption 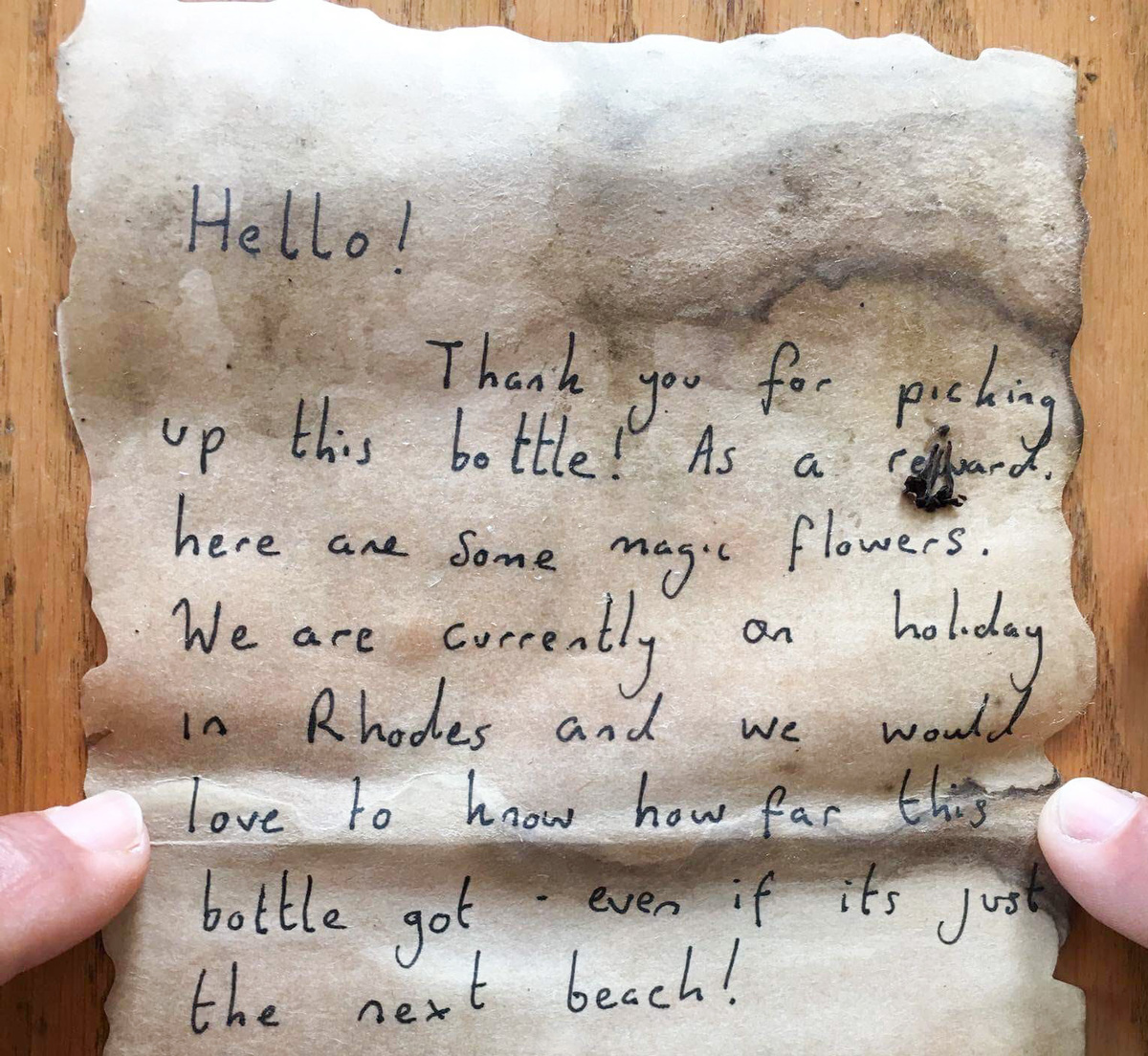 An English couple on vacation in Greece composed this note, rolled it up in a bottle and, on July 4, tossed it into the Mediterranean Sea. A Palestinian fisherman caught it in his net this week.

This story has been updated.

A message in a bottle washed ashore this week in Gaza.

"Hello! Thank you for picking up this bottle!" began the letter in neat black handwriting. "We are currently on holiday in Rhodes and would love to know how far this bottle got – even if it's just the next beach!"

The bottle floated much farther than the next beach. It traveled nearly 500 miles across the Mediterranean Sea, from the Greek island of Rhodes, past Turkey and Cyprus to the Palestinian seaside enclave of Gaza — and into the fishing net of Jihad al-Soltan, a 54-year-old Palestinian fisherman and father of seven.

He said it was the first piece of personal mail he had ever received.

Gaza is an isolated place. For the past decade, ever since the Palestinian militant group Hamas took control of this strip of land, its neighbors Israel and Egypt have imposed a blockade on the territory.

Few people can go in, and few can go out. Mail sent to Gaza must first pass through Israeli security at the border. 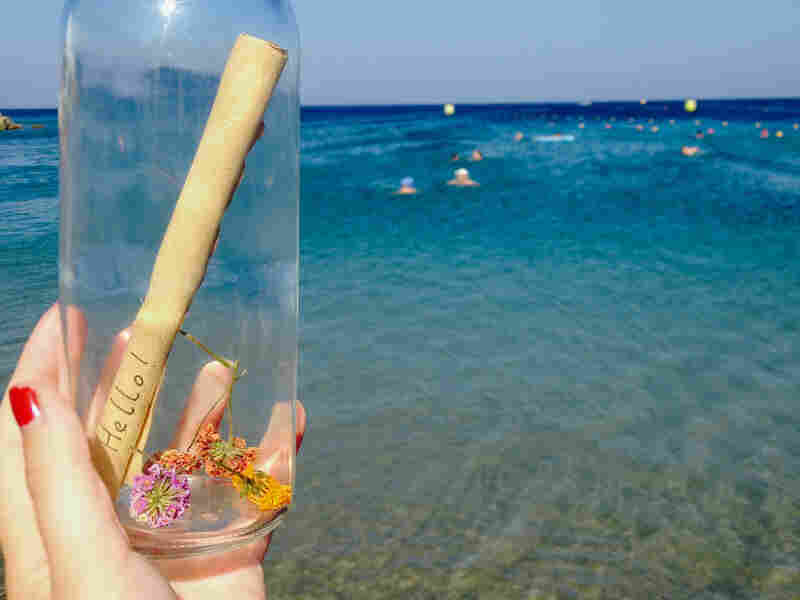 A photo of the bottle before Zac Marriner and Bethany Wright cast it from the Greek island of Rhodes into the Mediterranean Sea. Photo courtesy of Bethany Wright hide caption 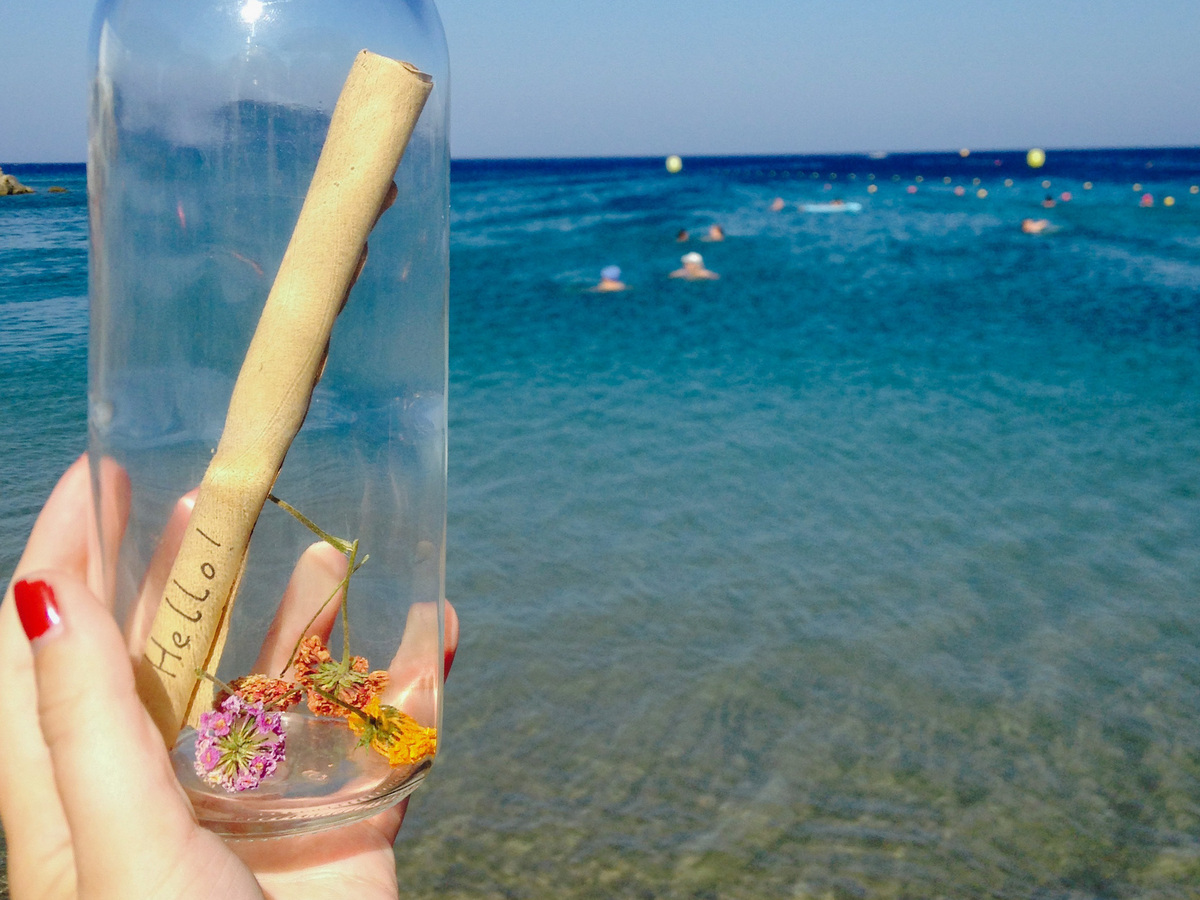 A photo of the bottle before Zac Marriner and Bethany Wright cast it from the Greek island of Rhodes into the Mediterranean Sea.

The message Soltan found included an email address, and the letter was signed, "Faithfully, Zac and Beth."

Word of the note reached NPR, and an email to that address led to the back story.

Beth is Bethany Wright, a 22-year-old university student from Lichfield, England. She said she had always dreamed of casting a message in a bottle into the ocean to see whether anyone would write back.

On the last day of their Greek island vacation, her boyfriend Zac Marriner, 25 and a newly qualified medical doctor, surprised her with a bottle he had brought from England. (He knew about her message-in-a-bottle dream). They composed their note on a piece of parchment.

They stuffed the rolled-up note and some small flowers inside, sealed it with a cork and watched it float away. That was July 4.

On Aug. 15, Soltan was fishing when he noticed a bottle bobbing in the sea with a note inside. He captured the bottle with his fishing net and took it home.

He broke the bottle open and had his son-in-law, Wael al-Soltan, an English teacher, translate what was written on the somewhat water-damaged parchment inside.

The bottle had reached a kindred spirit: Three years ago, Soltan himself had done the very same thing. He scribbled the words "End the siege" — the blockade on Gaza — in Arabic on a piece of paper, stuffed it inside a bottle and threw it into the sea, he said.

He never got a response. But he asked his son-in-law to email his reply to the British couple.

"I want them to know that Gazans are nice people and wish to have a nice life like theirs. We wish to be able to travel and do such romantic things," Soltan said.

His son-in-law, Wael, emailed a short reply that the bottle had been found in Gaza. Wael showed the message in the bottle to his friend Mahmoud, who was inspired to email the British couple a note of his own:

"It was certainly incredible that our bottle was found at all, let alone on a beach in Gaza," Wright said in an email to NPR. "So tragic the situation there means people are so cut off, but the bottle reaching there illustrates greatly how we are just all one world, all connected by one ocean and loved by one God."

Since this story was published on Aug. 19, other media published Wright's email address. She says she's received hundreds of emails – including many from Gazans wishing her a happy life.

NPR spoke again with Soltan, and he recalled that he did receive another piece of personal mail – from a cousin in Egypt, in 1977.