Accessibility links
France's Gender Equality Minister Wants On-The-Spot Fines For Sexual Harassers : Parallels Marlene Schiappa, France's equality minister, is a 34-year-old ex-blogger who hopes to change ingrained attitudes. Her work is cut out for her — but "she is young and she is out loud," a fan says. 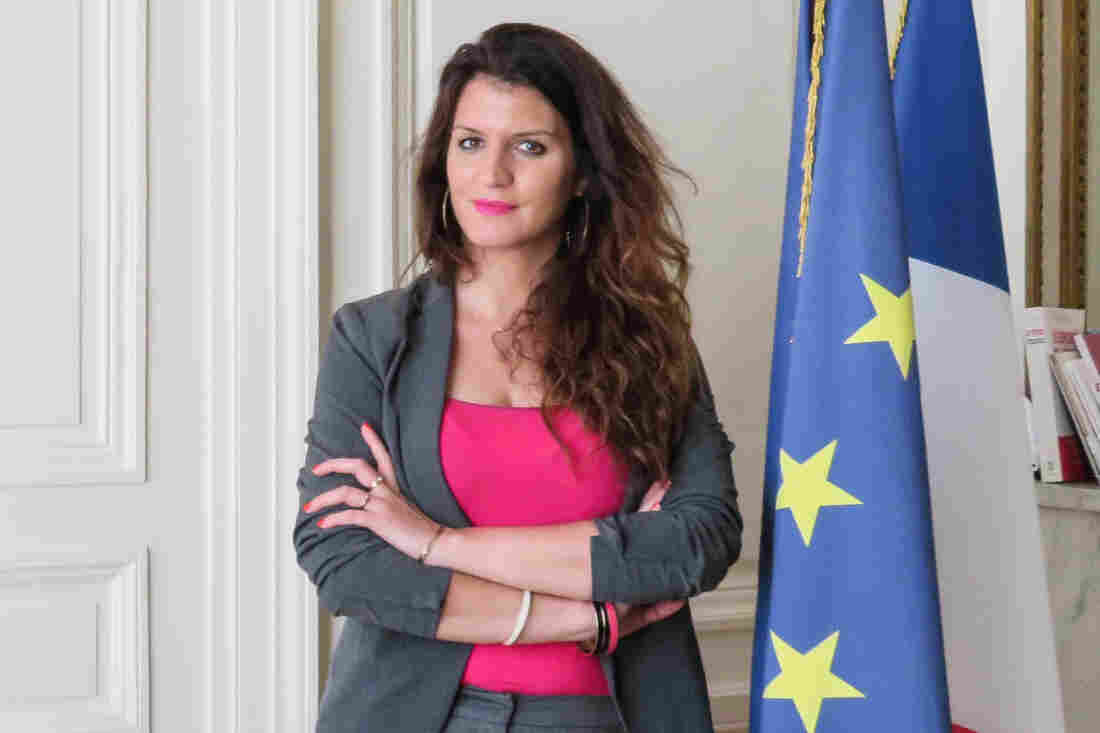 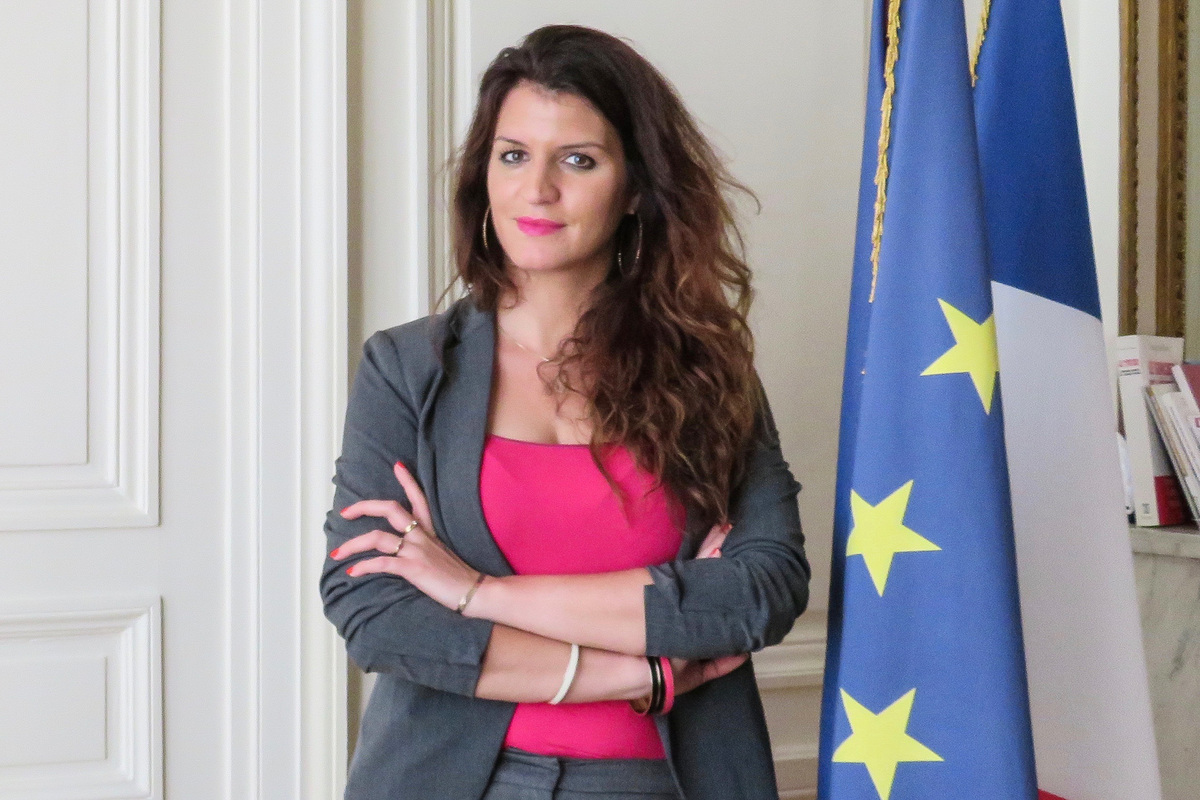 Marlene Schiappa started a blog, Maman Travaille (Mom Works), that quickly grew into a 10,000-woman advocacy network. As gender equality minister, she wants to criminalize sexual harassment on the streets. President Emmanuel Macron has tasked her with tackling pay inequity as well.

Marlene Schiappa was barely into her teens when she realized that Paris, the City of Light, could be a dark place for women.

Whenever she and her sister walked anywhere — to school, to the supermarket, to hang out with friends — men followed them, catcalling, harassing, even groping.

"We took alternative routes, out of our way," she says, "to avoid the bands of boys."

Twenty years later, Schiappa, now 34, is France's secretary for gender equality and the youngest member of President Emmanuel Macron's cabinet. One of her major goals, she says, is to make France's public spaces safer for women and girls.

In her grand, light-filled government office in central Paris, she's wearing a gray business suit, bangles clanging on her wrists, her long brown hair swept to one side. There are papers stacked on her desk alongside a tiny, colorful knit purse belonging to her 10-year-old daughter.

Schiappa is thinking of girls coming of age when she says her first priority is drafting legislation that would make it a crime to harass women on the streets — something that's not covered by a 2012 law prohibiting sexual harassment in the workplace.

She says police should fine harassers on the street the equivalent of thousands of dollars on the spot.

"You don't have to follow girls on two, three streets and ask her 20 times [for] her phone number," she says. "[Harassers] say, 'Oh, but it's my right. I'm just chatting and talking with that girl. I'm making a compliment.' They don't understand."

"Obviously, I don't think the problem is men going to women and say[ing], 'Oh, I find you cute, can we have a drink' or something. That's not offensive," she says, sipping an afternoon cocktail in Paris' hip Marais district. "The problem is men thinking they're entitled to yell at a young woman, saying like, 'Hey, you, you have a fine ass!' " 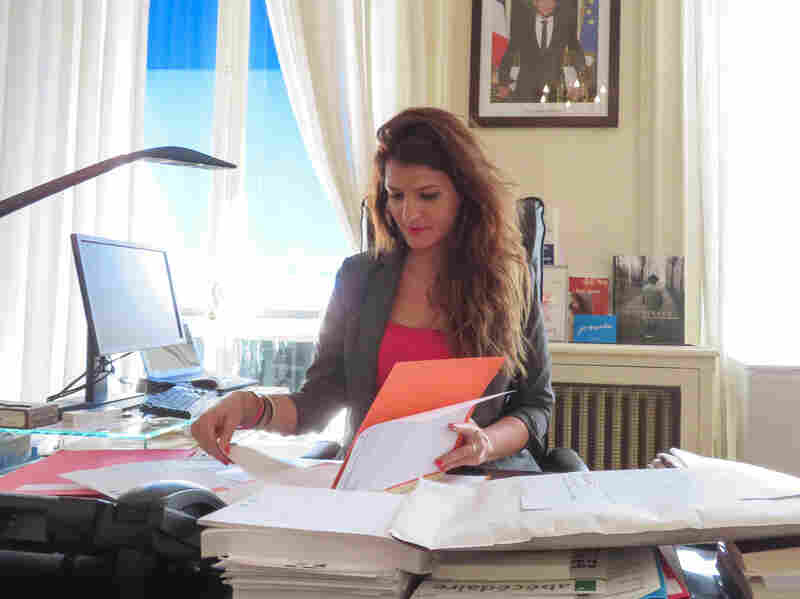 Unlike most French politicians, Schiappa grew up in public housing in a multi-ethnic, working-class Paris neighborhood. Joanna Kakissis/NPR hide caption 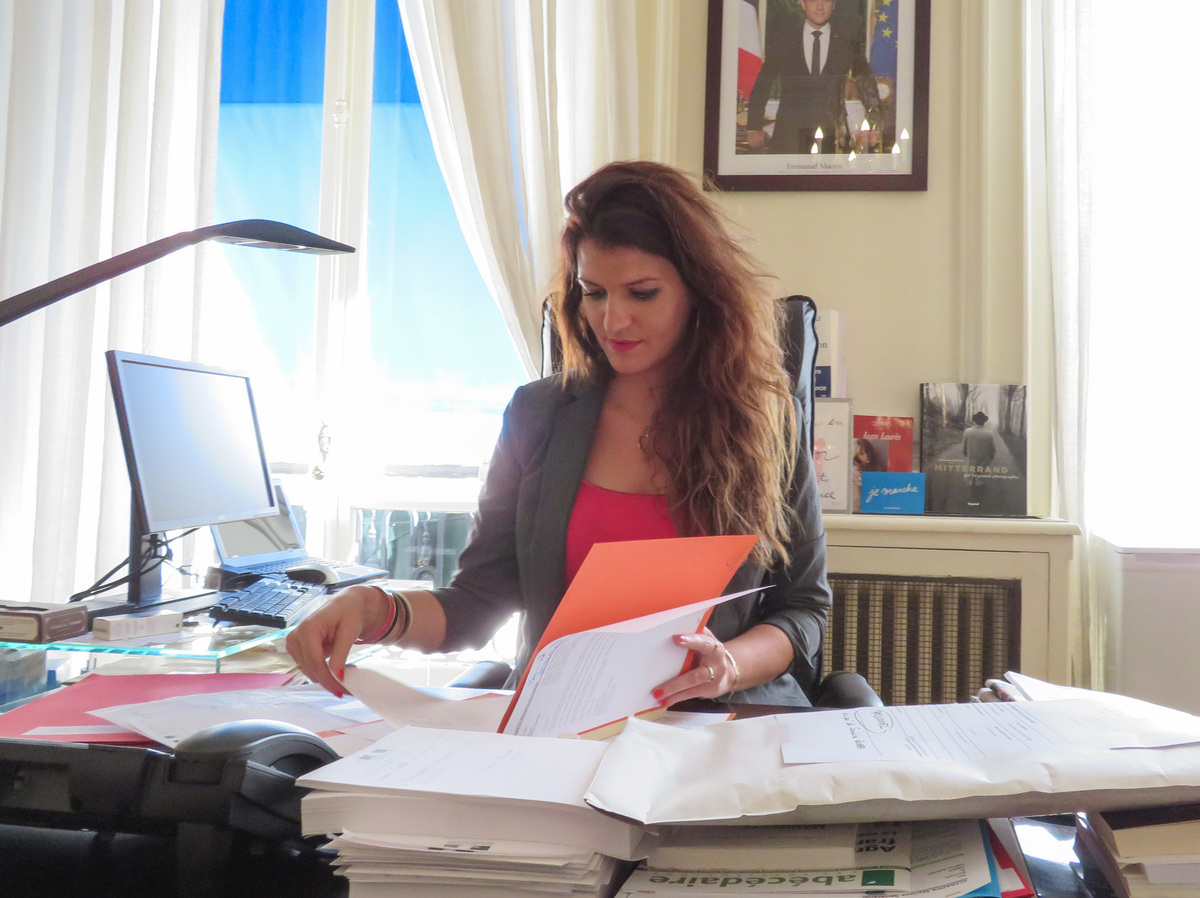 Unlike most French politicians, Schiappa grew up in public housing in a multi-ethnic, working-class Paris neighborhood.

Attention has tended to focus on sexual harassment in poor, immigrant areas of Paris, including La Chapelle-Pajol, a working-class neighborhood in the north. Women recently took to the streets to protest harassment there.

But Schiappa insists it can happen anywhere. Such attitudes, she says, are part of an ugly culture of violence against women that she hopes to change. Her office says at least 15 percent of French women report sexual violence at some point in their lives.

When Schiappa hears anecdotes about French women who blame themselves when they're attacked, "That's rape culture," she says. For that to change, men and boys must receive stronger messages about their own behavior, she emphasizes.

'The goal is equality'

Criminalizing harassment on the streets is just one of Schiappa's goals. She's also tackling France's gender pay gap. She's criticizing sexist advertising. And she is pushing to change a law that bars lesbians and single women from seeking health coverage for in-vitro fertilization.

Unlike most French politicians, Schiappa grew up in public housing in a multi-ethnic, working-class Paris neighborhood. She was raised in an academic family that was far from well-to-do.

Her father, from Corsica, was a history professor. Her mother, from Italy, was a schoolteacher and principal. They supported Schiappa's dream to become a writer and political leader.

Schiappa studied communication at university and then worked at a high-powered advertising firm. After she had the first of her two children, at 23, she struggled balancing work and home, like many French working moms.

So she started a blog, Maman Travaille (Mom Works), that quickly grew into a 10,000-woman advocacy network. She left advertising and wrote several books on parenting, pregnancy and work-life balance, including one with her husband Cedric Bruguiere.

Schiappa entered politics in 2014, when she was elected to the municipal council of Le Mans, a city southwest of Paris. She became deputy mayor and met Macron a year later. She calls him a feminist who fights for women.

"You know, I will not be politically correct here, I'm sorry, but I think having a woman president is not the goal," she says. "The goal is equality, and I don't care if the president is a woman or man."

Macron has tasked Schiappa with tackling the gender pay gap in France, where women are paid about 25 percent less than men, according to France's National Institute of Statistics adn Economical Studies.

Schiappa has already identified 10 companies that have the biggest pay gaps and invited representatives to attend gender-equality training next month, arranged by her ministry.

Anne-Cecile Mailfert of the Women's Foundation says paying women less than men is illegal in France, but the law is rarely enforced.

"Companies are so blind to it, they don't think it's a problem," she says. "They tell women: 'I don't think you're a genius. But your colleague, the man, he's the genius.' " 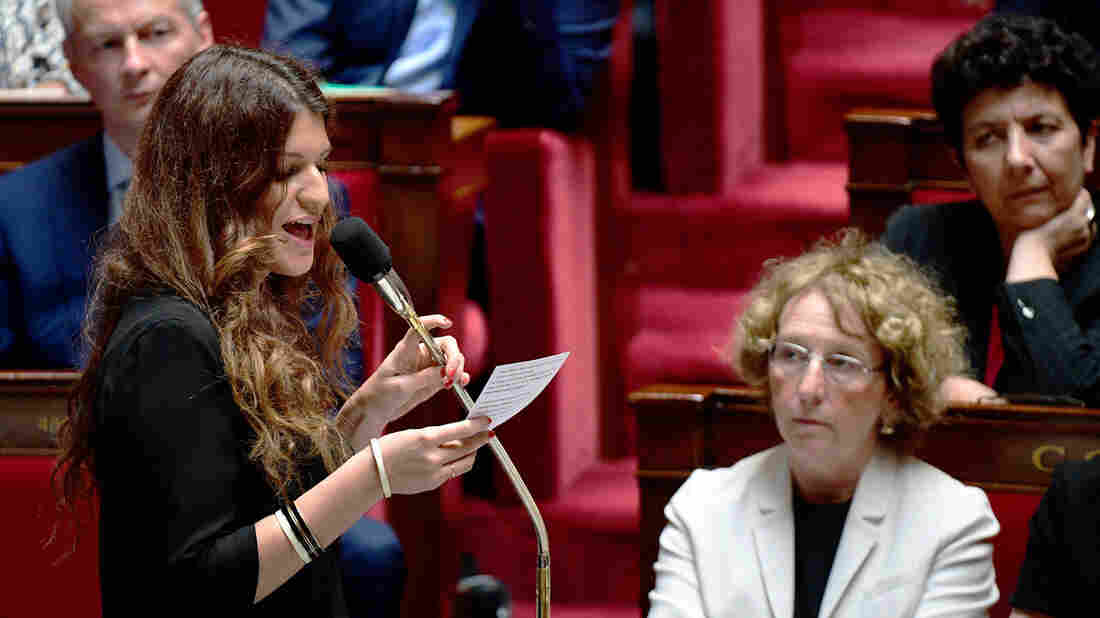 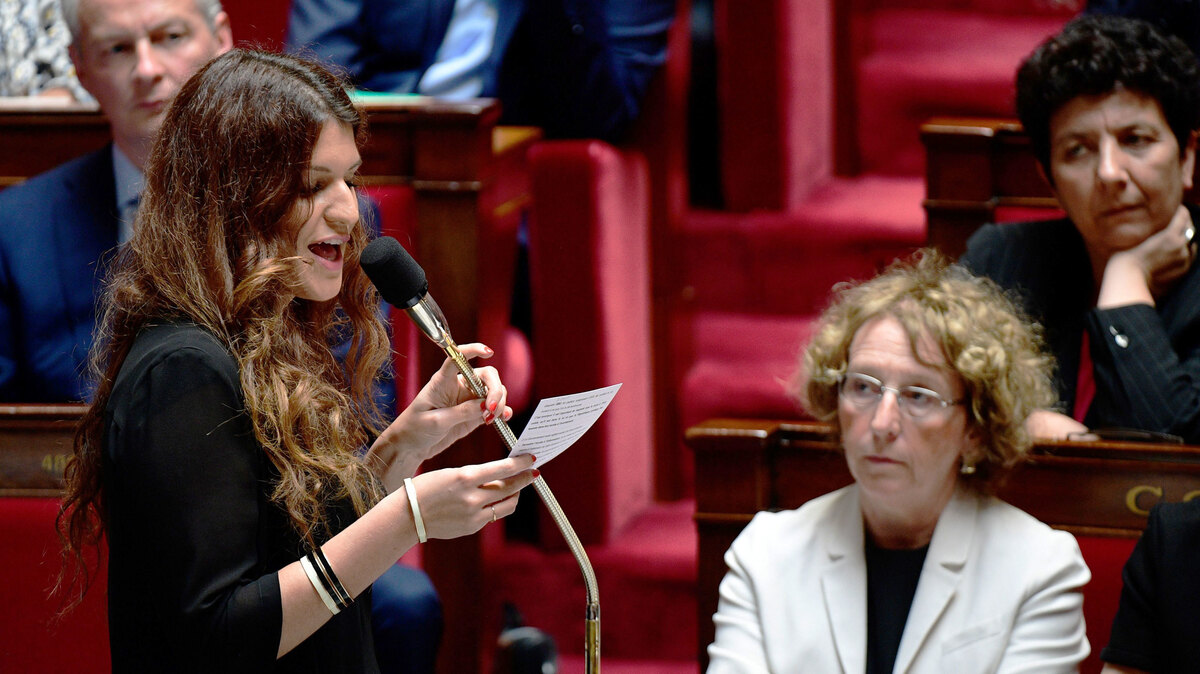 Marlene Schiappa addresses deputies during a session of the French National Assembly on July 5.

Mailfert says she wants Schiappa to play hardball with these companies — and not just talk tough.

'She is young and she is out loud'

Schiappa's blunt style is well known in France. Critics point to her early writings to argue that she's too inexperienced, naive or abrasive for politics.

Those from the political right claim she's insulting French culture by focusing on male chauvinism. Some on the left, meanwhile, say she's not a true feminist because she wrote a book, published in 2010, praising the sexual power of overweight women. (Schiappa now concedes that book was "not very clever.")

She's also been known to over-reach. The French Union of Gynecologists and Obstetricians called for her resignation after she claimed that 3/4 of French mothers received episiotomies without their consent. The union said those figures are inaccurate.

Financial analyst Norah Memran, who serves on the board of a Paris shelter for LGBT youth, believes the criticism comes down to this: "She is a woman, she is young and she is out loud. Who likes that? Right? I do. I like it because — girls' power. It's about time."

Marie-Noelle Bas, an activist who runs a nonprofit targeting sexism in advertising and media, applauds Schiappa for slamming a supermarket chain for selling bags emblazoned with the message, "Hurray! I have my man's credit card!"

"It reinforces this false image of women as compulsive spenders who are 'kept' by their high-earning men," Bas says. "Everywhere you look, you see images of women as stereotypes — as homemakers and mothers or sexual objects."

Schiappa says she understands that she's taking on a lot in her new job. But she says the time is right and attitudes toward France's male-dominated culture are changing.

A watershed moment came in 2011, when former International Monetary Fund director Dominique Strauss Kahn was accused of trying to rape a hotel housekeeper in New York City. Four years later, he was accused of involvement in a prostitution ring. He was not convicted in either case, but his sexually predatory behavior was highly publicized each time.

Last year, Denis Baupin, a deputy speaker of parliament, quit after women accused him of groping and sending them explicit text messages — even though he was never charged with a crime and denied these accusations.

And Parliament, under Macron, recently gave final approval to a law that forbids men who are found guilty of sexual assault from holding public office.

"I think not everyone is fighting for gender equality," Schiappa says. "So there is a political fight, an ideological fight."

Since the June election that brought Macron to office, she says, that fight finally seems winnable. Women made record gains in Parliament — and now hold nearly 40 percent of seats, up from 25 percent. And Macron, the new president, has appointed women — including Schiappa — to half of his Cabinet posts.

Jake Cigainero contributed to this story.