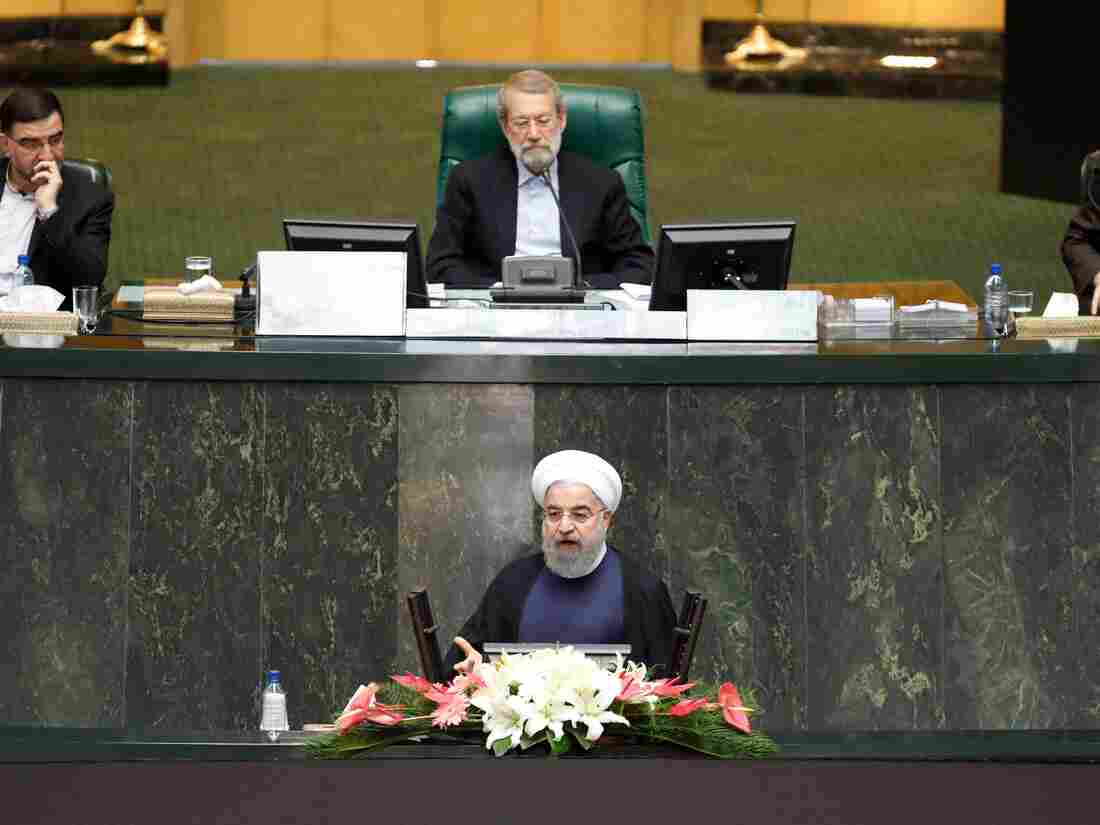 President Hassan Rouhani addresses Iran's Parliament on Aug. 20. He said the top foreign policy priority for his new government would be to protect the nuclear deal. STR/AFP/Getty Images hide caption 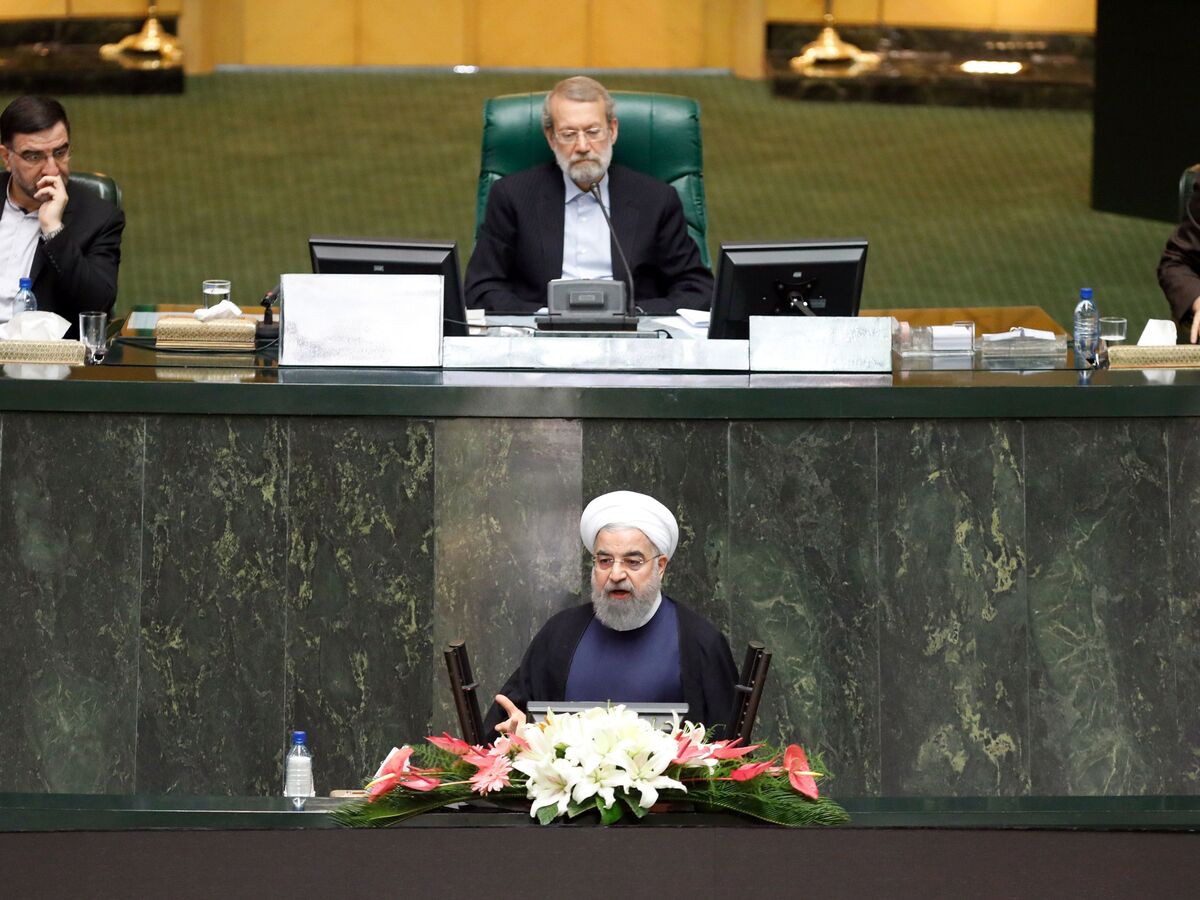 President Hassan Rouhani addresses Iran's Parliament on Aug. 20. He said the top foreign policy priority for his new government would be to protect the nuclear deal.

Two deadlines are approaching that may signal the fate of the 2015 nuclear agreement known as the Joint Comprehensive Plan of Action. The agreement saw Iran sharply curtail its nuclear program and allow extensive inspections in return for the lifting of international sanctions.

Sept. 14 is the deadline for the Trump administration to decide whether it will continue to waive Iranian sanctions under the deal. The sanctions were passed by Congress and go into effect unless they're waived every few months — which Trump has done previously.

The administration also faces an Oct. 15 deadline to certify whether Iran remains in compliance with the nuclear deal. That certification requirement is not part of the deal but was imposed by Congress. That is, when the Obama administration signed the deal, Congress required him to say every three months whether he believed Iran was in compliance. It was a way for members of Congress to hold Obama to account for a deal many opposed.

Earlier this month, U.S. Ambassador to the United Nations Nikki Haley essentially made the case for decertifying Iran. She told an audience at the American Enterprise Institute in Washington that President Trump must consider not just issues covered by the deal — Iran's stockpile of enriched uranium, a nuclear fuel — but Tehran's aggressive policies in the region and its ongoing tests of ballistic missiles.

Haley stopped short, though, of saying the administration was poised to walk away from the deal.

"If the president chooses not to certify Iranian compliance," she said, "that does not mean the United States is withdrawing from the JCPOA." There have been reports that there's a debate going on within the Trump administration regarding whether to decertify.

The recent focus of those against the deal seems to be on Iran's military sites, with critics saying inspectors from the International Atomic Energy Agency are failing to routinely inspect them along with Iran's declared nuclear facilities.

IAEA Director-General Yukia Amano defends the verification regime as the "most robust" being conducted anywhere today and insists that military sites are not off-limits.

Iranian officials say just the opposite.

"Nobody is allowed to visit Iran's military sites," Ali Akbar Velayati told reporters in Iran recently, calling the push for such inspections a threat to its national security. Velayati is an adviser to Supreme Leader Ayatollah Ali Khamenei.

So who is right?

The IAEA inspectors are charged with ensuring that no potential nuclear fuel — highly enriched uranium and plutonium are the two commonly used sources — is being diverted to a covert nuclear weapons program. Under something called the Additional Protocol, which Iran accepted as part of the JCPOA, inspectors can request access to undeclared sites, including military sites. But the agreement spells out a series of steps to gain that access that could take as long as 24 days to complete.

Critics contend that is far too long to wait.

David Albright with the Institute for Science and International Security and former IAEA official Olli Heinonen co-authored a recent paper calling for greater access to Iran's military sites. They zeroed in on one section — Section T in Annex 1 — that deals with verifying that Iran hasn't acquired "dual use" technology that could serve either a peaceful nuclear purpose or weapons development.

Albright and Heinonen suggest that Iran may be in violation of some of these restrictions, and they argue that the IAEA should inspect Iranian military sites as a regular part of enforcing this part of the agreement, not treat such inspections as special cases used only in response to evidence of a specific violation.

Earlier this year, the IAEA reported that its verification of Iran's nuclear commitments includes those set out in various sections of the agreement — including Section T — but Albright and Heinonen contend truly effective verification "requires the establishment of a routine inspection approach."

The IAEA chief says the JCPOA is working and that it has all the authority it needs. Amano told reporters in Vienna this week that special access is already happening on a regular basis.

"Already we have had many [visits] and we will continue to have access," he said, adding that "we do not distinguish between civilian sites and military ones."

What Amano did not say, however, is whether military sites are currently being inspected — something critics of the deal might seize upon.

He also has said that inspectors need a reason to request access to undeclared sites, and the JCPOA section on access states that "if the IAEA has concerns [emphasis added] regarding undeclared nuclear materials or activities," then it can request to see undeclared — i.e., military — sites. It's unclear what kind of reason or evidence the IAEA would consider sufficient.

Supporters of the JCPOA such as Ali Vaez, senior Iran analyst at the International Crisis Group, say the remarkable access the West now has to Iran's nuclear program via the deal and the IAEA inspections should not be thrown away lightly.

"The IAEA has never had better access to Iran's military sites," says Vaez. "If the Trump administration loses this unprecedented access ... it will soon wish for it."

Vaez adds that derailing the JCPOA now could also have unintended consequences.

"If the Trump administration kills the deal with Iran, [a deal] that is working and [that] the rest of the international community is highly satisfied with," he says, "it should forget about peacefully settling the nuclear standoff with North Korea."

How this could play out

If the White House decides not to waive the sanctions this week, that could throw the deal in doubt immediately. But assuming the sanctions are waived on Thursday, certification becomes the next question.

As Haley, the U.S. ambassador to the U.N., pointed out, decertifying Iran next month wouldn't automatically pull the U.S. out of the JCPOA. But some worry it could provoke an Iranian reaction that would ultimately lead to the agreement's demise.

There's also another possibility: that the Trump administration will continue to waive sanctions against Iran, and then decertify. That would very likely shift the focus to Tehran — and to Congress, which could move to impose new sanctions on Iran.