Accessibility links
Why The Race To Oust ISIS From Deir Ez-Zor In Syria May Present New Dangers : Parallels Syrian troops and allied militias are locked in a race against U.S.-backed rebels for control of an oil-rich province that will give whoever governs it greater influence in the country's civil war. 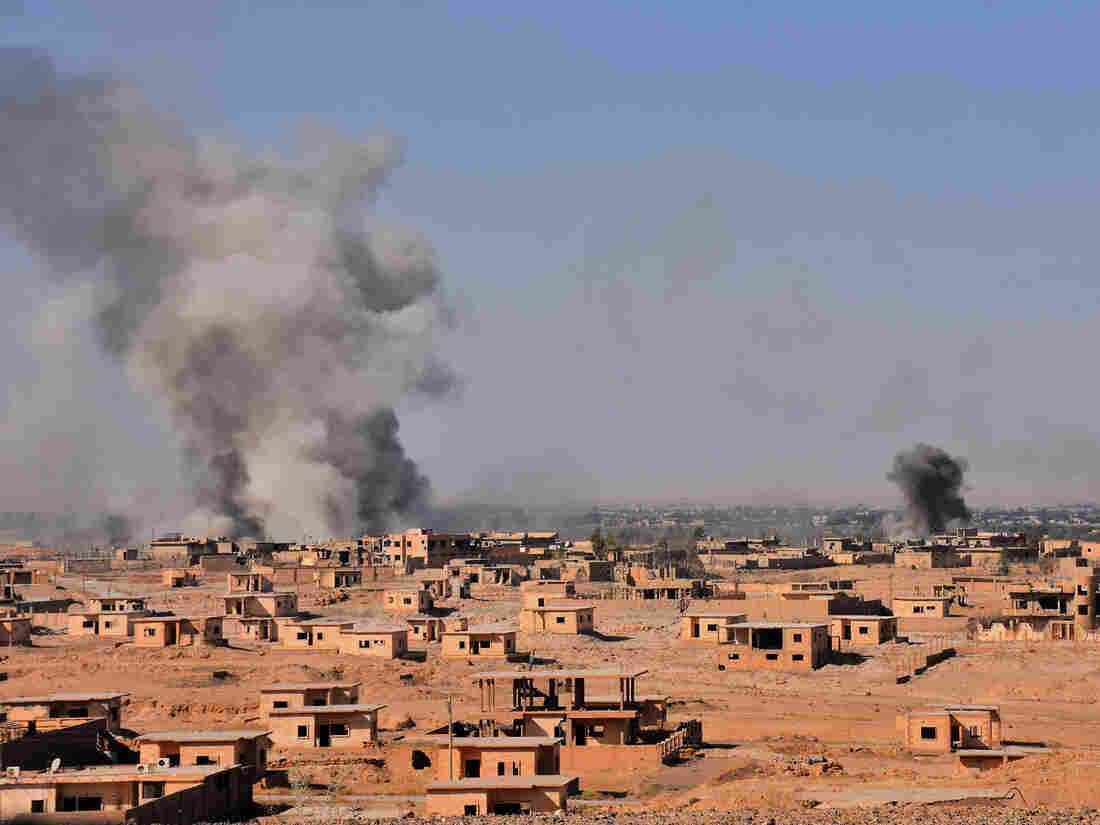 Smoke rises from buildings in the area of Bughayliyah, on the northern outskirts of Deir ez-Zor on Sept. 13, as Syrian forces advance during their ongoing battle against ISIS. George Ourfalian/AFP/Getty Images hide caption 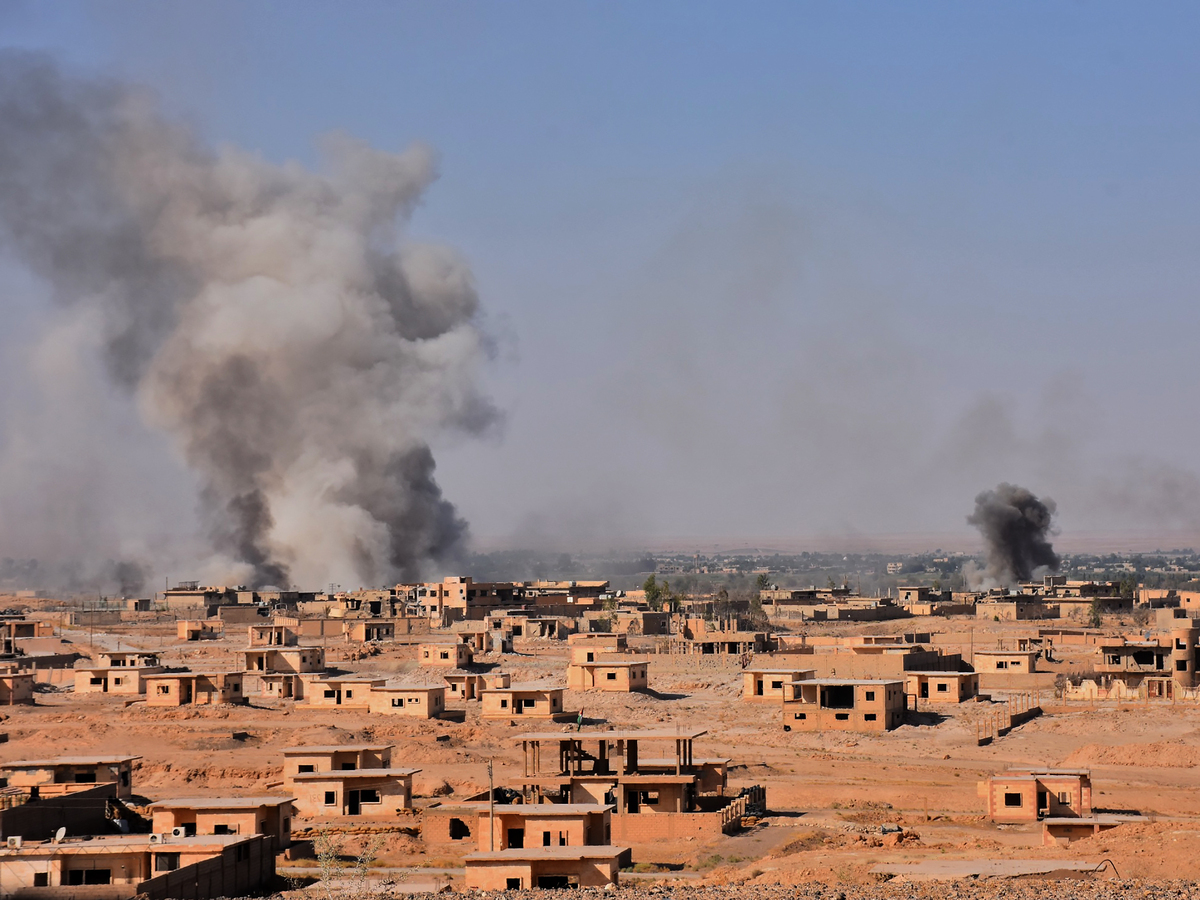 Smoke rises from buildings in the area of Bughayliyah, on the northern outskirts of Deir ez-Zor on Sept. 13, as Syrian forces advance during their ongoing battle against ISIS.

Syrian government troops and allied militias are locked in a race against rebels backed by the United States for control of Deir ez-Zor, an oil-rich province that will give whoever governs it greater influence in the country's wider civil war.

Government soldiers and supporting militias have now crossed the Euphrates River, which had served as an informal dividing line between them and the U.S.-backed Syrian Democratic Forces (SDF) as they waged separate offensives against ISIS in the area.

Nicholas Heras, a Middle East fellow at the Center for a New American Security in Washington, warned that navigating this situation will be complicated.

"It's going to take a significant diplomatic and de-confliction gymnastics for the U.S. military and the Russian military to get their local partners in line so that you don't see conflict between Assad's forces and Iran's proxy militias and the [U.S.-backed] SDF," he said.

The United States has repeatedly said it is present in Syria only to fight ISIS, and not to get involved in the country's wider civil war. It had sought to keep its operations in areas separate from those of Assad — who Washington considers a war criminal — and his Russian and Iranian allies.

But last week, as the Syrian regime broke an ISIS siege on Deir ez-Zor city and vowed to sweep the jihadists from the rest of the province, U.S. Central Command endorsed a decision by the SDF – men trained, supplied and backed by the Pentagon – to launch their own offensives in the province.

In a statement, it praised the fighters who would take part as a "battle-tested" and "proven partner force in the Coalition's fight to defeat ISIS."

This force, made up of Kurdish and Arab fighters, swept in from the northeast, taking hundreds of miles of desert terrain as they stormed down toward the lusher eastern bank of the Euphrates River.

The Damascus regime, which has vowed to retake the whole of Syria (even if it's unlikely to be militarily capable of doing so) was apoplectic at the SDF's decision to fight ISIS this area. Pro-government media accused the U.S., through the SDF, of illegally occupying parts of Syria.

The Syrian army pressed on fast. Video footage filmed by pro-government sources showed soldiers crossing the river at night in rubber boats. Later pictures circulated on Twitter of pontoon bridges being set up and regime tanks rumbling across to the east side of the river, coming within only a few miles of the SDF positions.

In crossing to the east bank of the Euphrates river, the regime has also come closer to the oil fields that make up much of Syria's oil reserves. These fields have been under ISIS control since 2014, generating vast revenues for the jihadist group.

And they will be a powerful economic driver for whoever seizes them after the extremists are pushed out — as will Al-Bukamal, a town further to the southeast that marks the border crossing with Iraq.

Iran has deployed militias to help the regime retake this area from ISIS. Controlling this border would allow it to reopen a route from Tehran through Iraq, to supply Hezbollah and other proxy militias in Syria and Lebanon.

But even more importantly, says Aymenn Jawad al-Tamimi, an analyst at the Middle East Forum, this would be a major economic boost for Damascus. It would allow the Assad regime not to rely on bankrolling by its Russian and Iranian allies.

"I think the main point of this wider eastern offensive is to open trade routes [to Iraq] and to give the regime an economic boosting that can strengthen its hold for the long run," said Tamimi.

Whoever takes this economically important area, analysts agree, will have a greater say in the post-ISIS carve-up of Syria. It is an important bargaining chip at the negotiating table with the many different players of the country's civil war.

Col. Ryan Dillon, a spokesman for the U.S. coalition, said he was aware of the strategic value of this terrain, but said that was not part of the U.S. military's calculations in Syria.

"What I have said before still holds," he said. The U.S.-led coalition "is not in the land-grabbing business."

He said moving against ISIS in Deir ez-Zor province at the same time as the Syrian regime made sense at an "operational level" because it had allowed them to strike ISIS when the jihadists were already preoccupied with fighting the Syrian military.

But the leader of the SDF's Deir ez-Zor military council, who goes by the pseudonym Ahmed Abu Khawla, was far blunter in explaining the group's objectives.

"We want to defeat ISIS, and then liberate not only the oil fields but all the land factories and people," he said.

Abu Khawla, who fought against the Syrian regime in the civil war before ISIS rose in Syria, and who hails from a powerful tribe in the area, said this would place the province is back in the hands of "its rightful owners."

As the U.S.-backed offensive in Raqqa progresses, ISIS is said to be on the back foot. Many of the leaders are said to have fled to al-Mayadin, a town in Deir ez-Zor. There are unconfirmed stories of panicked jihadist group members starting forced conscriptions in the towns they control.

But the war is far from over. The group is said to be consolidating its strongest fighters around the oil fields and Al-Bukamal – the areas it cannot afford to lose.

As the U.S.-backed forces and pro-regime troops close in on these areas, it's becoming ever harder to fight separate offensives.

The U.S.-led coalition and the Russians warn each other of their planned assaults against ISIS using a "de-confliction hotline" that is meant to prevent accidental fire on each other.

But last Saturday, the U.S.-led coalition said Russian warplanes had bombed SDF positions. Russia said it had only carried out strikes against ISIS, and that it had used the normal channels to communicate its planned attack.

The de-confliction lines are often rather ad hoc, said Heras of the Center for a New American Security. In Al-Bukamal and other key areas in Deir ez-Zor, areas the Assad regime forces and the SDF can fight in, the lines have not been fully drawn out.

So, said Heras, the race is on between the two sides to simply be the first to stake their claim to strategically vital areas. It sometimes can take as little as "20 guys with a video camera" from one side to race to a patch of land and say, "Hey, de-confliction, we are here now," he said.

"There is the propaganda conflict here — a war of who can lay claim to land even if they haven't won it fully militarily," said Heras.

Whoever wins this race, he said, can use the spoils "to influence the broader Syrian war."