Accessibility links
Far-Right German Party Could Lead Opposition After Sunday's Election : Parallels Polls show the Alternative fuer Deutschland (Alternative for Germany) party is in third place and poised to lead the opposition in Parliament. Here's what to know about its agenda and prospects. 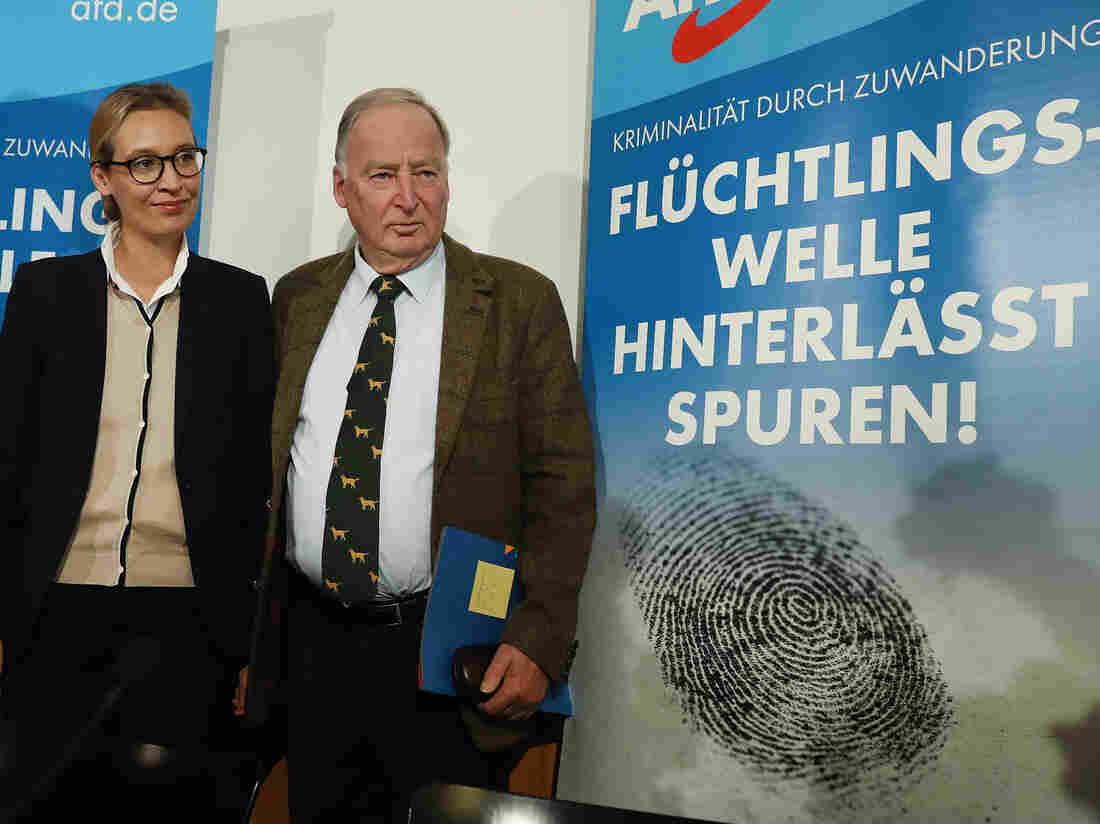 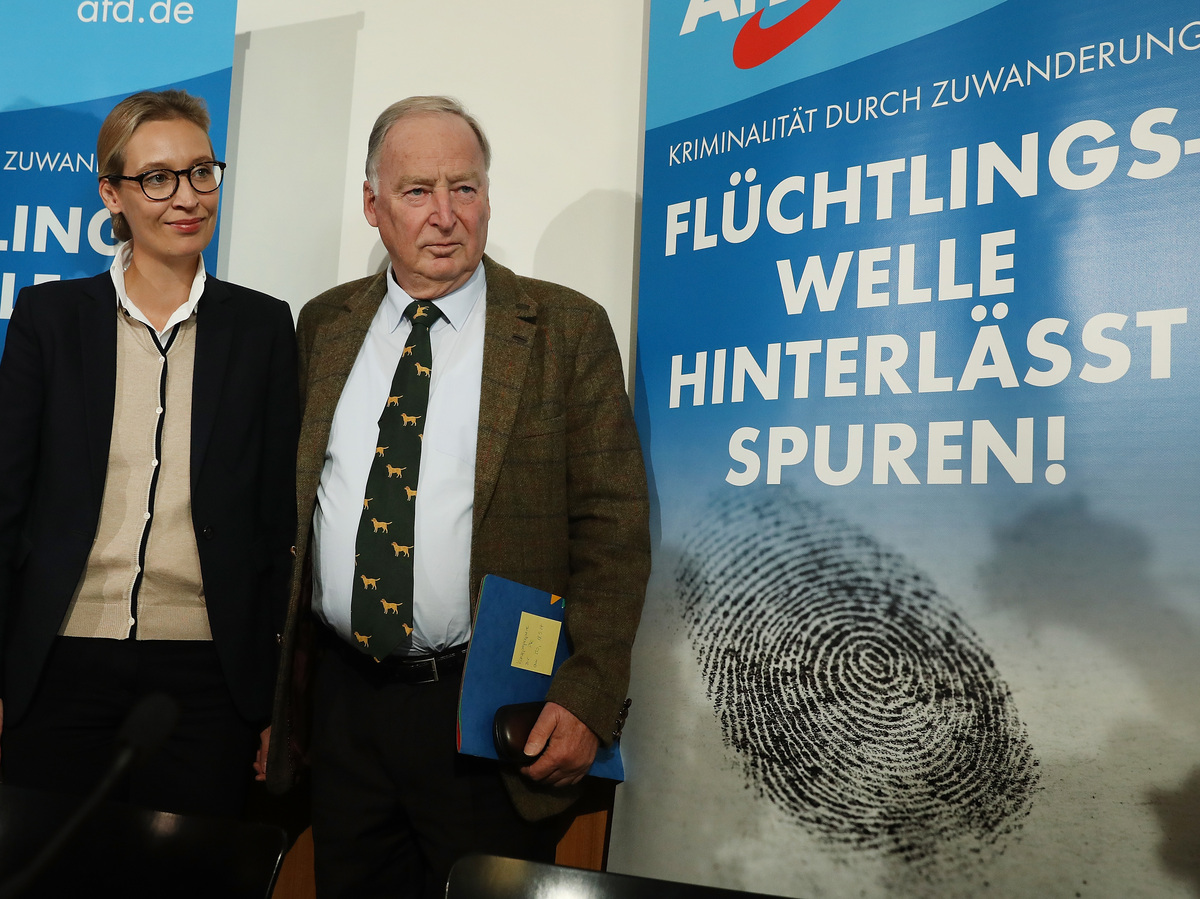 Alice Weidel and Alexander Gauland, leading candidates of the right-wing, populist Alternative for Germany (AfD) political party, stand near an AfD poster that reads: "Crime Through Immigration, The Refugee Wave Leaves Behind Clues!" Sept. 18 in Berlin.

German Chancellor Angela Merkel and her Christian Democratic Union are poised to win Germany's national elections Sept. 24. But for the first time since the Second World War, Germany's Parliament, the Bundestag, also looks set to include an extreme right-wing party — the Alternative fuer Deutschland (Alternative for Germany) or AfD.

Since its founding in 2013, the party, led by economist Alice Weidel and former CDU politician Alexander Gauland, has been shaking up the German political landscape. It is currently represented in 13 of Germany's 16 state legislative bodies.

Polls suggest that among Germany's smaller, less dominant political parties, the AfD is leading with double-digit numbers. It's running third after the CDU and the Social Democratic Party. If the election results in another coalition government, the AfD would become the opposition leader.

"It is worrying," says Michael Fuchs, a Christian Democrat Bundestag member since 2002. "For the first time in the history of the Federal Republic of Germany, there will be a political party within the walls of the Reichstag [Parliament] building which does not distance itself from the Nazi past and which tolerates members who publicly express themselves in racist and xenophobic language."

Here's what to know about the party and its prospects:

What is the AfD?

The AfD started four years ago as a conservative populist party, rejecting the euro. It came to greater prominence after Germany's migration crisis began in 2015, and attracted members from mainstream political parties. Since then, it has become more openly racist and anti-Muslim, favoring an anti-immigration agenda.

Its leaders have also called on Germany to stop apologizing for — and indeed to "be proud of" — its Nazi past. Gauland, the AfD's national spokesman, stated earlier this month, "If the French are rightly proud of their emperor and the Britons of Nelson and Churchill, we have the right to be proud of the achievements of the German soldiers in two world wars."

The party has turned away from Germany's long-accepted political norms, says Constanze Stelzenmueller, a German political scientist at the Brookings Institution.

"Germany's postwar foreign policy had two lodestars," she says, "atonement for World War II and the Holocaust, as well as reconciliation with its victims and enemies — and joining the universe of Western democracies, and specifically integration into the U.N., NATO, and the European Union. The AfD more or less explicitly rejects both these orienting principles in favor of an ethno-nationalist, sovereignist, anti-European, anti-American and pro-Russian stance."

She says the rise of the AfD is in keeping with movements elsewhere in the world, including in the U.S.

"All Western democracies, including the U.S. and Germany, are seeing powerful protest movements ... against globalization and integration," she says. "They are agitating for a recapturing of control, or 'sovereignty,' and often also of ethnic homogeneity. Although they keep talking about the nation-state, they oppose key principles of Western constitutionalism like separation of powers and the protection of minorities against the tyranny of the majority. They want a tribalization of politics. That's something the Tea Party and the U.S. alt-right have in common with the AfD."

How much power comes with leading the opposition?

The opposition leader has a special role in the Parliament, explains Werner Patzelt, political scientist at the University of Dresden: "There are two advantages to being opposition leader," he says. The first is control of the chairmanship of the Committee on Budgets — which means it influences fiscal policy.

Also, Patzelt says, "The opposition party is ensured the right to respond first to any statement issued by the government, which in turn ensures publicity."

That publicity — having a greater national platform for its views — is what worries many analysts.

What are the AfD's likely legislative priorities?

The party favors complete closure of Germany's borders, limiting the number of incoming refugees and prohibiting subsequent immigration of family members. It wants Germany to withdraw from the eurozone. And it favors a ban on headscarves.

Alexander Hensel, a political scientist of the Institute of Democracy Research in Goettingen, has investigated how AfD representatives have changed state governments so far. The party "focuses less on constructive and consensus-oriented work," he says. "With its entrance in the state parliaments, political arguments have become more polarized. Substantive debates as well as the tone and the social interaction within the parliamentary debates become more harsh."

Joerg Meuthen, the opposition leader from the AfD in the state parliament of Baden-Württemberg, tells NPR, "The debates in parliament have become livelier. We offer a truly alternative political policy draft."

There is a precedent for populist proposals in German politics, says the University of Dresden's Patzelt. When the Green and Left parties were new to Parliament, they introduced populist bills. "But in those instances," he says, "left-wing populism was more popular with the media" than right-wing populism.

How will other parties deal with the AfD?

All of Germany's political parties have refused to enter into a coalition with the AfD.

"Everything originating from us will be rejected," says the AfD's Meuthen, "just because it does originate from the AfD."

But legislators are sure the AfD's presence will be felt nevertheless.

"Otherwise opposing parliamentary factions are nonetheless connected, in essence, by what they recognize as a great responsibility to history," says Konstantin von Notz, a Green Party Bundestag member since 2009.

"I am convinced that on the very first day of remembrance for the victims of [Nazism], there will be an act of propaganda by the AfD in the Parliament," he says.

Usually on this day of commemoration, observed every January, members of Parliament stand in honor of victims' memory — but it's possible, according to von Notz, that AfD members would leave the room.

Von Notz fears that the AfD will break with parliamentary consensus "and fail to behave decently by being civil and respecting one another personally, even if we hold very opposite positions. The neo-fascist-leaning segment of the AfD could revoke this behavioral consensus."

But Hensel's study of the AfD's effects on state governments suggests that efforts to isolate the AfD will backfire.

"Attempts at formal or symbolic exclusion generally play into the hands of the AfD," he says, "allowing them to cast themselves as sympathetic victims of the other political parties."

Stelzenmueller of the Brookings Institution warns that the AfD "will be seeking attention by attempting to provoke as much as possible."

She offers the following advice: "Rule No. 1 will be to not fall into this trap. Rule No. 2: Mainstream parties should not allow the AfD to claim sole ownership" of hot-button issues such as integration of refugees.

"More than ever," she says, "mainstream parties need to stake their own claims and convince voters that theirs are the best policy ideas."

Drawing on extensive experience, Fuchs, the CDU politician, recommends that those in the majority party should "demonstrate a clear, contrasting profile toward political opponents within the AfD. Only then shall we succeed in having them eliminated from Parliament once again."