Accessibility links
As Voters Head To The Polls, Germans Continue To Grapple With Identity : Parallels German voters will most likely re-elect the same woman who has led Germany for the past 12 years. The question of German identity, however, could remain at the center of political debate.

As Voters Head To The Polls, Germans Continue To Grapple With Identity

As Voters Head To The Polls, Germans Continue To Grapple With Identity 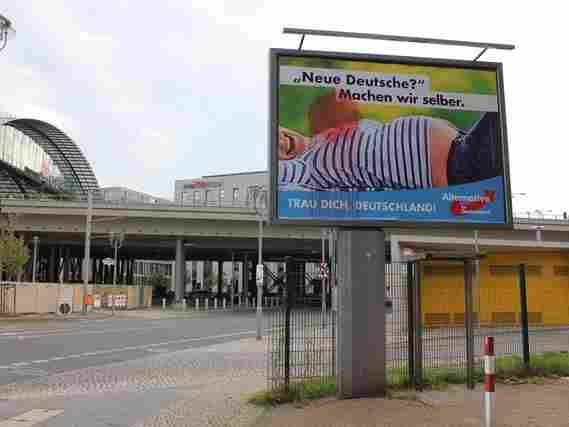 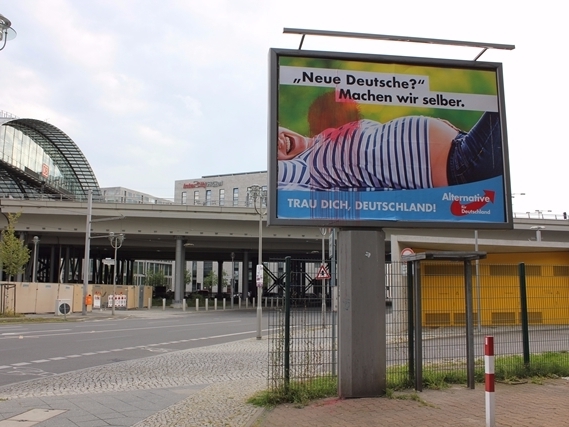 A political ad for the right-wing party Alternative for Germany reads: "New Germans? We'll make them ourselves."

It is almost impossible to walk the streets of Berlin without running into history. It's everywhere — the physical markers of conquest, division, horror, and reckoning. I was struck by it when I first came here in 2005 as NPR's Berlin correspondent and I am no less moved by it today.

Since the Berlin Wall fell in 1989, Germans have been grappling with their collective identity. There is the cultural division between those who hail from what was West Germany and those who lived life under Soviet communism in the East. But it's the horrors perpetrated by Germany during World War II that have made German identity so complicated.

Germans Head To The Polls On Sunday, Merkel Expected To Win Another Term

Germans Head To The Polls On Sunday, Merkel Expected To Win Another Term

I remember being in Germany for the World Cup in the summer of 2006 and what happened here was amazing. Something new was unleashed. There were German flags everywhere. Germans sang their national anthem before games. Fans walked around with the German national team jersey and German flags painted on their faces. Yes, it was about soccer and fandom, but it was bigger than that. It was the really the first time in postwar history that Germans displayed a sense of national pride, of patriotism, which until then had been basically off-limits. There was too much shame associated with German history.

Fast-forward more than a decade and the right wing party, the Alternative for Germany, is trying to leverage the notion that Germans have paid the price for their past sins and it's time to be proud of being German again. Time to be proud of their heritage. Time to "put German interests first," as one AfD official put it to me.

Here's What You Need To Know About Germany's Election

Angela Merkel and her Christian Democratic Union party are expected to win a fourth term in Sunday's elections. As Europe has become increasingly unstable — the global recession, the Brexit vote, the increased threat of terrorism — Merkel has been seen as the steady hand. And Germans like stability. But the refugee crisis of 2015 caused a political storm here. Merkel was heavily criticized by some for opening up the country's borders and taking in more than a million refugees in two years. The AfD has capitalized on the immigration issue, and it dovetails with the party's nationalist bent. The basic message is: Elect us and we will make sure immigrants, particularly Muslim immigrants stop pouring into Germany.

I spoke with the Berlin head of the AfD, Georg Pazderski, and he told me that refugees have put too much of a strain on the German economy. He says there aren't enough resources to support them. And he says, too much immigration is a security risk.

Pazderski also says there is a deleterious effect on the culture. "Islam doesn't belong to Germany because it's not a part of history of German history," he says. "But what we can see is that Islam is trying to get more and more influence in Germany ... We have women running around in burqas and so on. So in certain areas of Germany, the picture of the cities is changing dramatically."

He says immigrants from Muslim countries don't prioritize education. "They don't go into the school. They are not successful," Pazderski says. "They don't learn German in the right way so that they can later be successful in professional life. This is a huge problem, and we have this problem since 20, 30 years. There is no real integration in Germany."

Mohammed Eh'tai may prove otherwise. I met Mohammed in 2015 when I was here covering the refugee crisis. He had been in Germany for just a few months back then, and most of our conversation was about how he was determined to learn German and build a life for himself and his family. His family at the time was still in Syria. 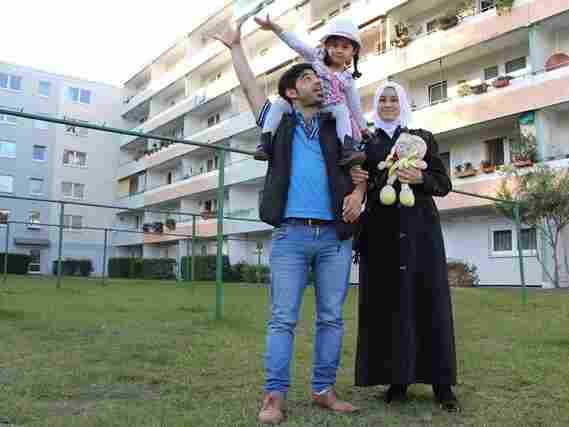 Mohammed Eh'tai fled Syria a couple of years ago. He has been reunited with wife Rawah, holding a doll that is one of the only items from their old life in Syria, and their daughter Rimas. Arezou Rezvani/NPR hide caption 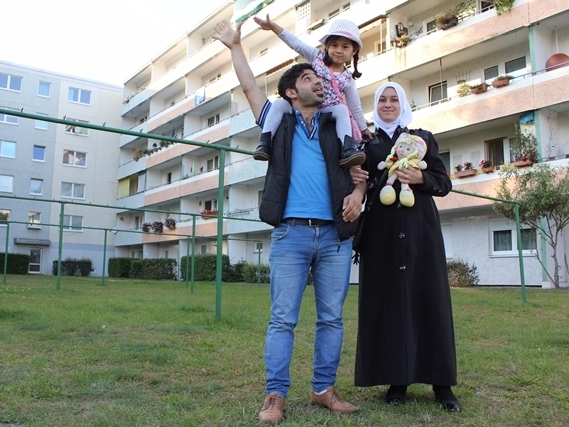 Mohammed Eh'tai fled Syria a couple of years ago. He has been reunited with wife Rawah, holding a doll that is one of the only items from their old life in Syria, and their daughter Rimas.

I got a chance to meet Mohammed again this week. His wife, Rawah, and his daughter Rimas are with him now. They got their visas in early April and arrived in Berlin a few weeks after that. The three of them are living in an apartment in a Berlin suburb. He works at a grocery store full time and just passed his citizenship test. Rawah is now studying to do the same thing, and they are teaching their 4-year-old daughter German. They want to stay in Germany. They want their daughter to build her life here. But Mohammed knows she will face her own challenges.

Mohammed goes on to tell me that being German shouldn't have to mean giving up his faith or his culture saying, "If I believe in God and I come to Germany and then say, 'There is no God,' how can I respect myself? How can my daughter respect me?"

Mohammed and his family represent yet another layer of German identity. Can it be more than a passport? Can it transcend a dark history? Can Germany be a multicultural society? Does it even want that? It was hard enough to integrate the East with the West after the wall came down. How will this country attempt to integrate more the a million foreigners with many more still trying to get here?

Voters will go to the polls Sunday and most likely re-elect the same woman who has led them for the past 12 years. The question of German identity, however, will remain at the center of political debate here if the AfD gets into parliament and their message gets a much bigger platform.