Accessibility links
France's Macron Calls For A United Europe, Greater Cooperation With Germany : Parallels French President Emmanuel Macron's speech laid out his vision of a united Europe that would be innovative and take risks. He called for a common EU defense force and intelligence service. 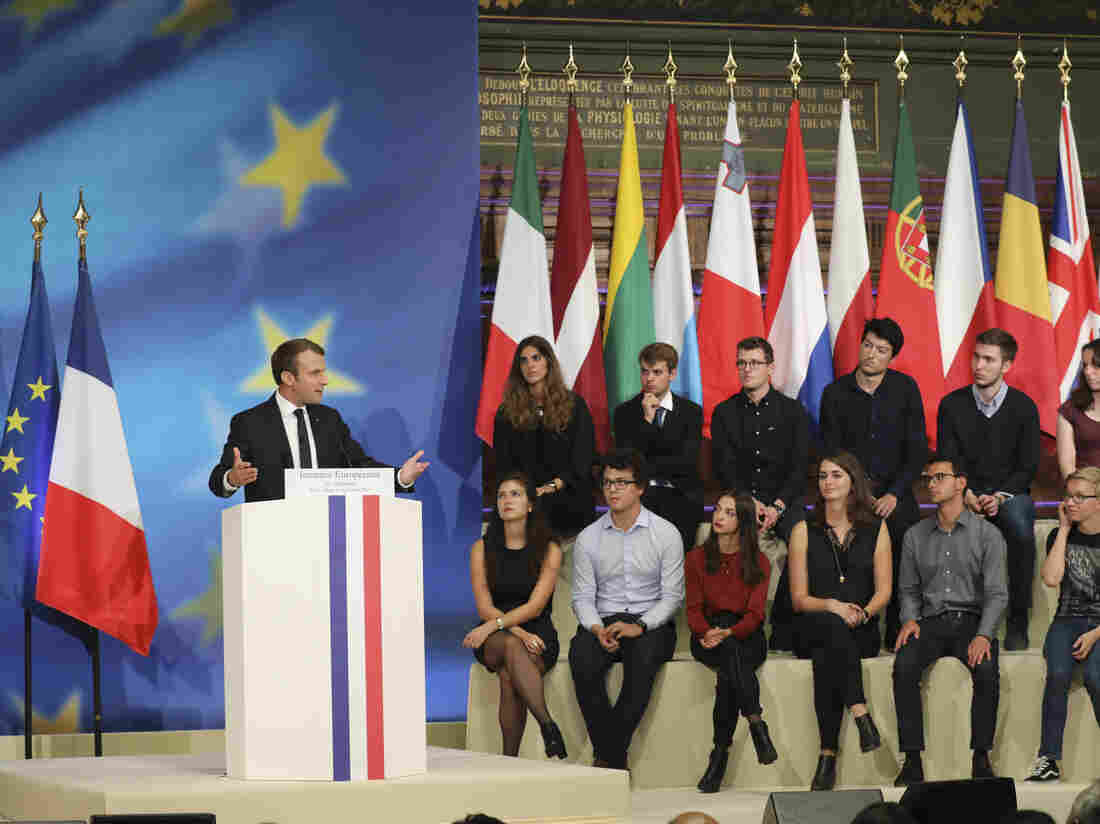 In his Tuesday speech at the Sorbonne in Paris, French President Emmanuel Macron called Europe "our history, identity, our horizon and what protects us and gives us our future." Ludovic Marin/AP hide caption 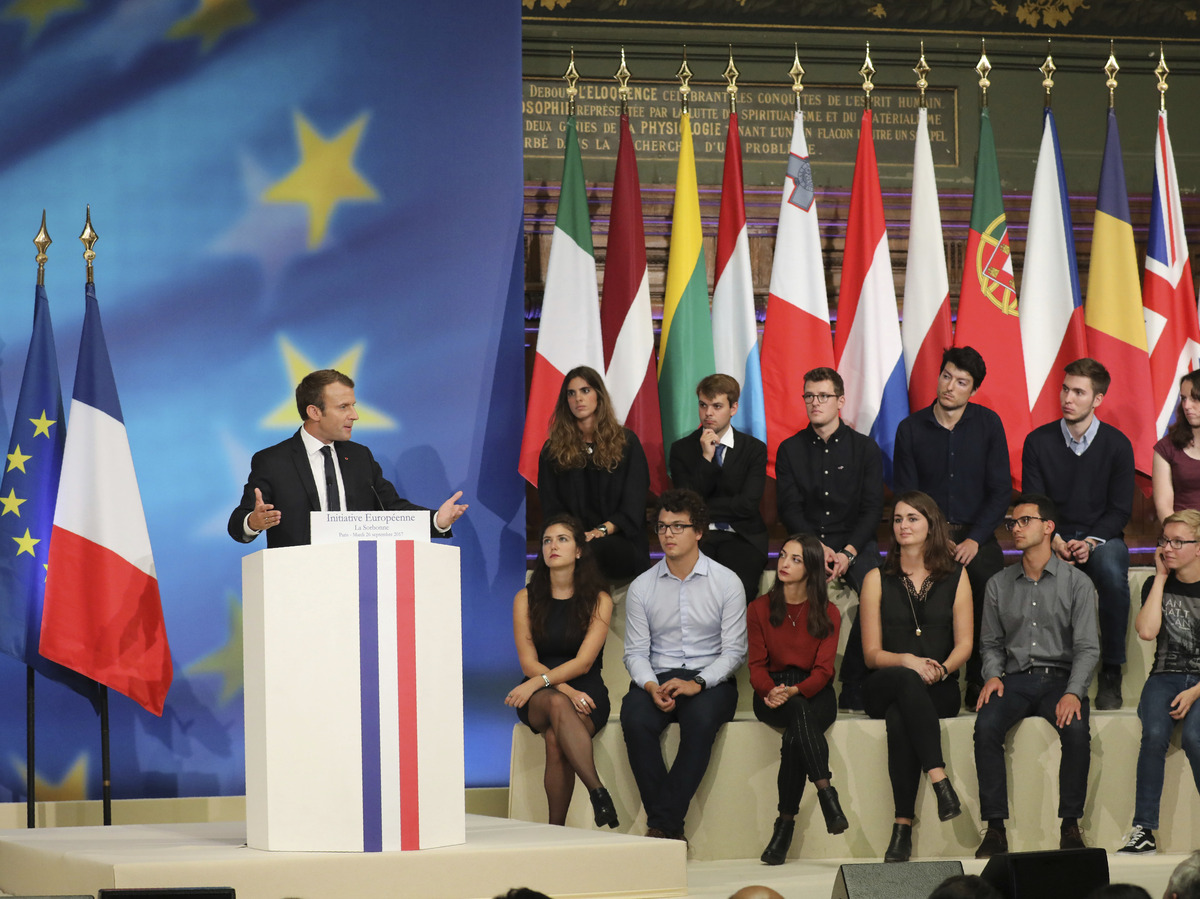 In his Tuesday speech at the Sorbonne in Paris, French President Emmanuel Macron called Europe "our history, identity, our horizon and what protects us and gives us our future."

In a sweeping speech at Paris' Sorbonne University Tuesday, Macron laid out his vision for an EU that would be less bureaucratic, more democratic and more sovereign — but above all, he said, one that would be innovative, risk-taking and audacious.

Macron called Europe "our history, identity, our horizon and what protects us and gives us our future."

Looking back at the EU's founding, Macron recalled how the continent rose from the ashes of two world wars.

"But ideas triumphed and the desire for fraternity was stronger than vengeance and hate," he said.

In recent years, though, Macron said Europeans had lost their objectives and become complacent and comfortable.

"For too long, the EU has been sheltered," he said, "its security guaranteed by America. Its economic policy was to catch up with America."

Macron said many of the things that had protected Europe are now gone.

He introduced a sweeping series of proposals, calling for a common European defense force and budget, a European intelligence agency to fight terrorism, a European-wide asylum office and policies and stronger EU border force.

Macron said Europe's greatest asset is its common market, which he said must remain fair and protective. He called for investment in cutting-edge research and more risk-taking.

The pro-EU French president was elected in May, beating the National Front's Marine Le Pen, a far-right leader who campaigned on a platform to hold a referendum on EU membership.

Macron said nationalism, protectionism and identity politics had lit the fires of conflict before and were now back, exploiting the fear and cynicism of people too long ignored.

"We have let doubt settle in," said Macron. "We let the idea spread that the EU was an overblown bureaucracy. All of Europe blamed Brussels for anything that didn't work, forgetting that we are Brussels. We didn't propose or desire anything more."

Macron said the only way for the countries of Europe to confront the challenges of today's world was in cooperation together.

"Global warming, the digital transformation, migration, terrorism – an inward-turning nation can do nothing if it faces these challenges alone," he said.

"Look at our epoch," he said near the end of his speech. "You no longer have the choice of being complacent, like former generations. Because the nationalists who hate Europe will be here in five, 10 or 15 years."

Macron said there was only one choice.

"We have to want this Europe and take the risks. It is our responsibility to our youth. Otherwise we are leaving them in the hands of the nationalists."

Macron said he would not talk about Brexit because he believed that "in a simpler, re-founded Europe, Britain could come back and find its place."

Speaking of German Chancellor Angela Merkel, Macron said, "We share the same European ambitions and I know her commitment to Europe."

"Why not set ourselves the objective that by 2024, we integrate our markets totally by applying the same rules to our companies, from corporate law to bankruptcy regulation?" said Macron.

Reaction to the speech across Europe was mostly positive. In Germany, where Merkel must form a new coalition to help steer Europe's biggest economy, politicians offered the young president encouragement — but also expressed caution.

Foreign Minister Sigmar Gabriel, a Social Democrat, said the speech was a bold, passionate plea against nationalism and for Europe. "We have to use this chance of a German-French initiative to together make Europe more democratic, involve its citizens and better prepare it for the future," he said.

But Hans Michelbach, a member of Merkel's parliamentary caucus who regularly opposed aide to Greece and other Eurozone members, called the French president's proposals — especially those calling for a Eurozone finance minister and budget — "unsuited to moving Europe forward." He warned they could lead to "a deepening split in the EU."

"His speech was shockingly ambitious," says Arnaud. "He is clearly taking a huge political risk. He made numerous concrete propositions and he is counting on a Franco-German cooperation that is much closer than it is now."

After Sunday's elections, in which Merkel's party lost Parliament seats, there is no telling what will happen, says Arnaud.

"We don't know how Merkel will respond in the short term because she has to negotiate the terms of her own coalition," says Arnaud. "And some of her coalition members may not like all of the French president's ambitious new plans."