Accessibility links
For Catalonia's Separatists, Language Is The Key To Identity : Parallels Many separatists say their Catalan language is what makes them feel most different from the rest of Spain. The language was prohibited during years of dictatorship, but now it's ubiquitous in schools. 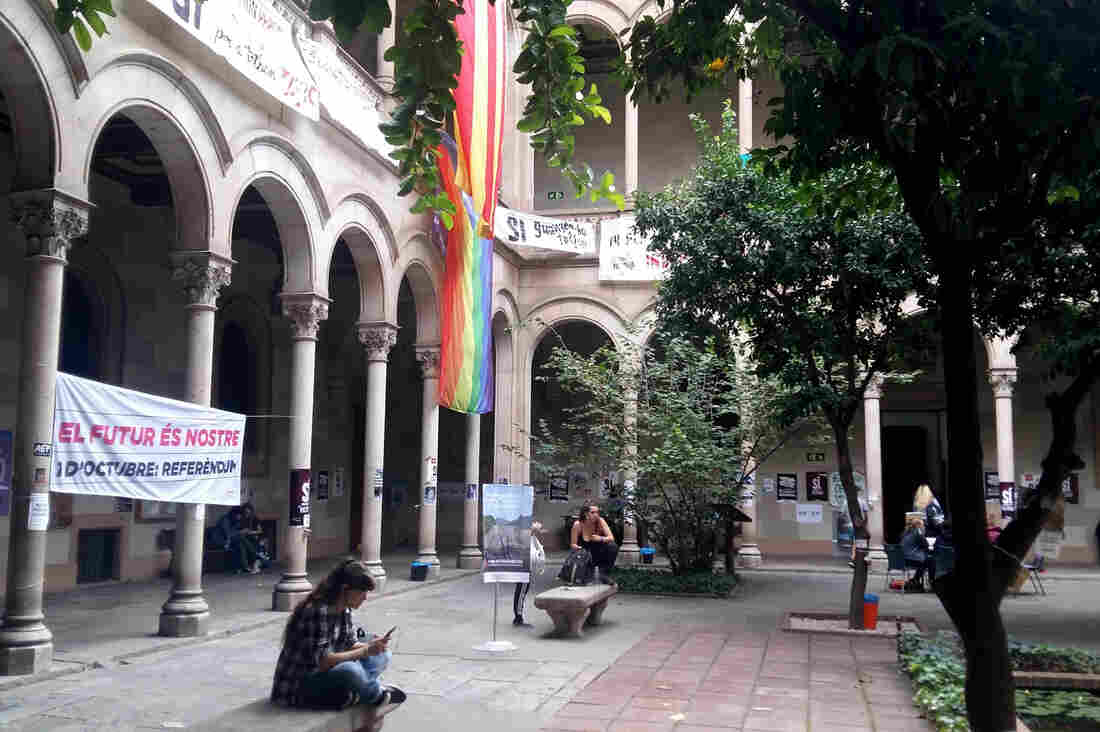 A banner hangs in the courtyard of a University of Barcelona building that reads, "The future is ours," in Catalan. Students are "occupying" the building ahead of an independence vote. Lauren Frayer for NPR hide caption 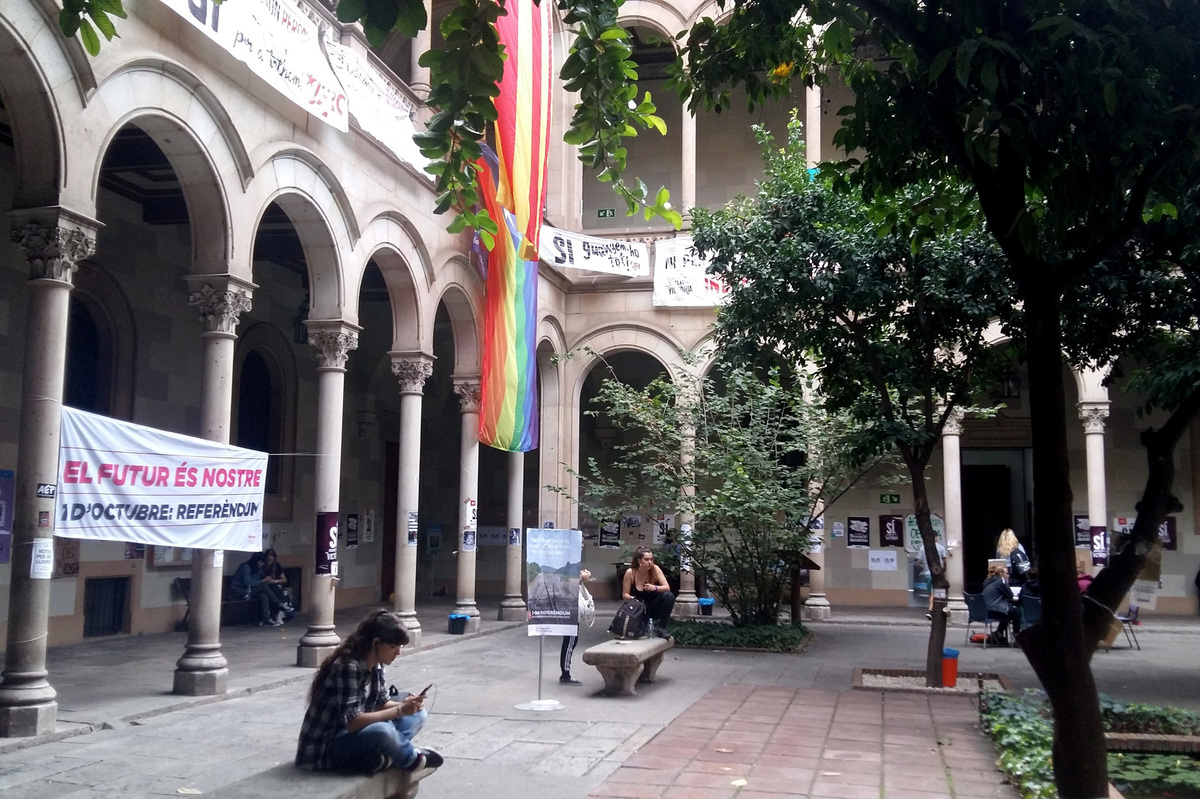 A banner hangs in the courtyard of a University of Barcelona building that reads, "The future is ours," in Catalan. Students are "occupying" the building ahead of an independence vote.

Inside a Barcelona film studio, a technician cues up a scene from the movie Prisoners, showing Jake Gyllenhaal's latest car chase.

Then a local actor — albeit one who's slightly older, balder and plumper than Gyllenhaal — delivers the Hollywood actor's lines in Catalan.

In Spain's northeast region of Catalonia, that's the official language, along with Spanish. Movies, television programs — even Netflix series — are all dubbed into Catalan. Dubbing is especially popular in children's programming for youngsters who don't yet know how to read subtitles.

"We have clients like 20th Century Fox, HBO. A lot of films, European and American, and lots of Japanese cartoons," says Miguel Torres, the technical director at the VSI Sonigraf Studio, one of eight Catalan dubbing studios in the region. "The point of this is bilingual development of the whole society. Managing both languages is a regular thing for us. Everybody does it."

In Spain, Catalans Are Divided Over Independence Vote As Referendum Approaches

Catalan is a Romance language with more than 4 million native speakers, most of whom speak Spanish too. More than double that number understand Catalan, or speak it as a second language. It's used in street signs, restaurant menus and, crucially, in public schools across Catalonia.

The language was prohibited during the nearly 40-year dictatorship of Francisco Franco, who died in 1975. That changed when Spain transitioned to democracy in the late 1970s and Catalonia was given control of its own education system.

"The first thing they did was immersion. This means you teach everything in Catalan, including math and biology," says Enric Ucelay-Da Cal, a Barcelona-based historian and expert on the Catalan independence movement. "It's all done in Catalan. That is still the case now."

It was a reaction to Franco's repression. But it made Catalan identity, which is also cultural and historical, more about language — in contrast to other ethnic groups in Spain, like the Basques, Ucelay says.

"Basque nationalism is ethnicity," he says. "But this, it's basically a language movement. We are Catalans because we speak Catalan."

One of the first post-Franco separatist groups in Catalonia in the 1980s was called La Crida a la Solidaritat per la Lengua — Catalan for "the rallying cry of solidarity for our language." It was the language, members believed, that entitled them to be separate.

Many of today's Catalans are actually the children of migrant workers from Andalucía, in southern Spain. Catalonia is Spain's economic engine, comprising about 20 percent of Spanish GDP and more than a quarter of the country's exports. The tourist hub of Barcelona is the Catalan capital.

Today, anyone under age 40 in Catalonia has been educated exclusively in Catalan. It's a demographic that disproportionately lost jobs during Spain's recent economic crisis and resented having their taxes subsidize poorer parts of Spain. 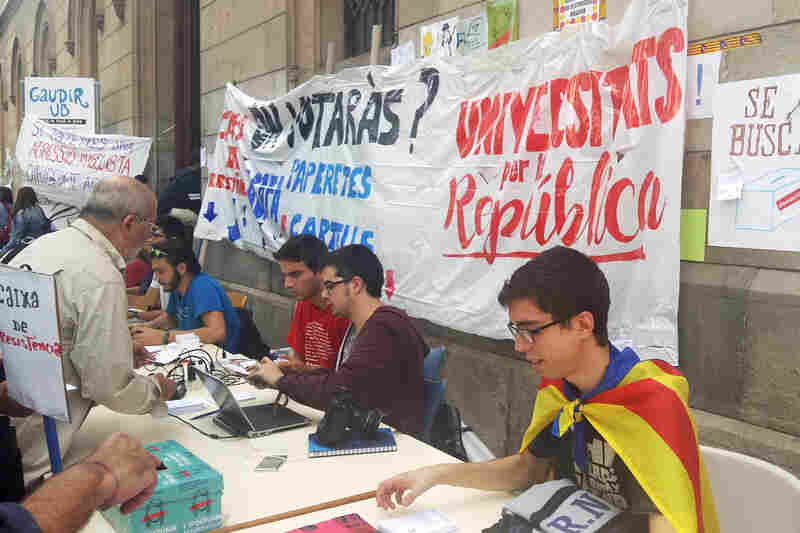 Students wear Catalan independence flags and hand out ballots in front of the University of Barcelona. Hundreds have been camping out at the university nightly ahead of Sunday's independence vote. Lauren Frayer for NPR hide caption 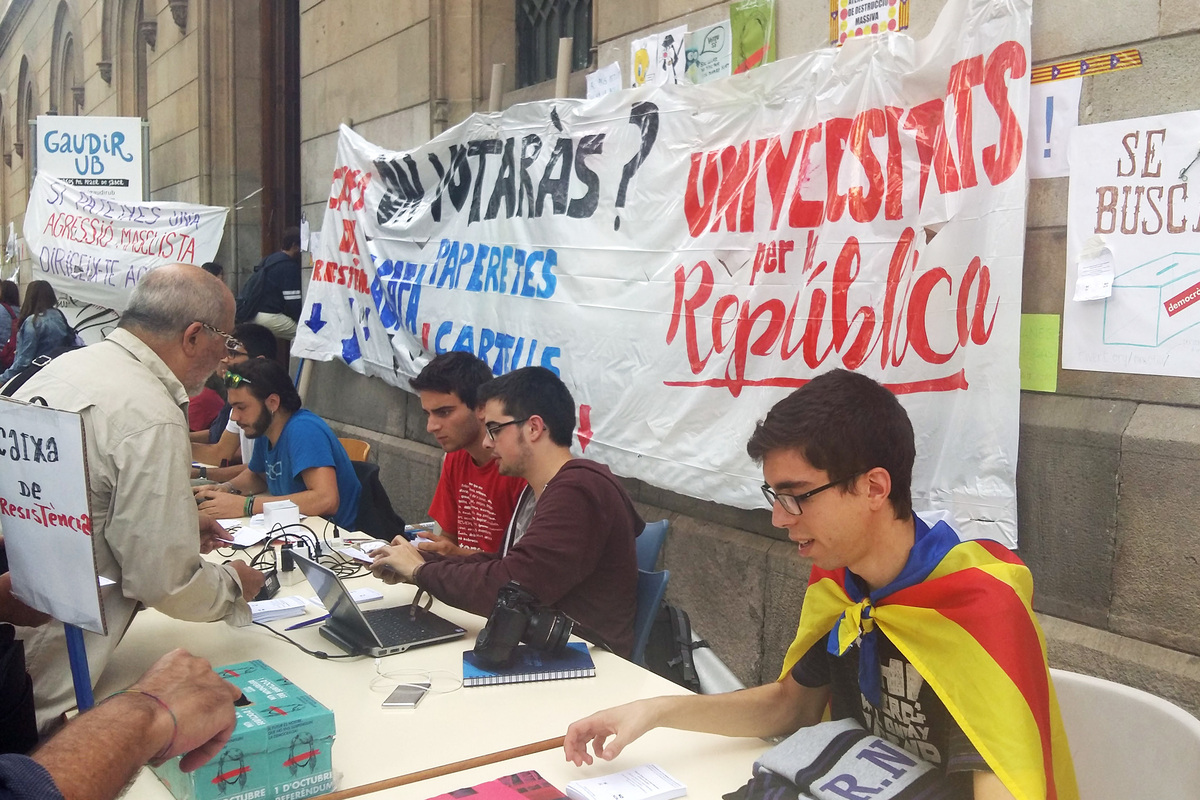 Students wear Catalan independence flags and hand out ballots in front of the University of Barcelona. Hundreds have been camping out at the university nightly ahead of Sunday's independence vote.

At the University of Barcelona this week, students have occupied a main building ahead of Sunday's independence referendum vote. Spain has said the referendum is illegal. The students are angry about Spanish police raids to confiscate ballots and Spain's efforts to incorporate more Spanish language into Catalan society. In 2013, the Spanish central government passed a national education law forcing Catalan schools to provide more hours of instruction in Spanish if parents petition for it.

Some see it as an existential threat.

"I think in Catalan and I dream in Catalan," says Marta Rosique, 21. "And then there is a government that tries to do as much as possible so that Catalan doesn't exist anymore! There is something that tells me to fight for my own identity, for my own language."

In conversation, she uses those two words interchangeably — "identity" and "language." This weekend, she hopes to express them at the ballot box — and vote for Catalonia's separation from Spain.