Accessibility links
Rohingya Refugees Pour Into Bangladesh, And Many Question A Militant Group's Actions : Parallels In August, a Rohingya militant group attacked Myanmar security forces, leading to retribution. Since then, hundreds of thousands have fled to Bangladesh. Some believe the militants went too far.

Listen · 3:52 3:52
Rohingya Refugees Pour Into Bangladesh, And Many Question A Militant Group's Actions 3:52 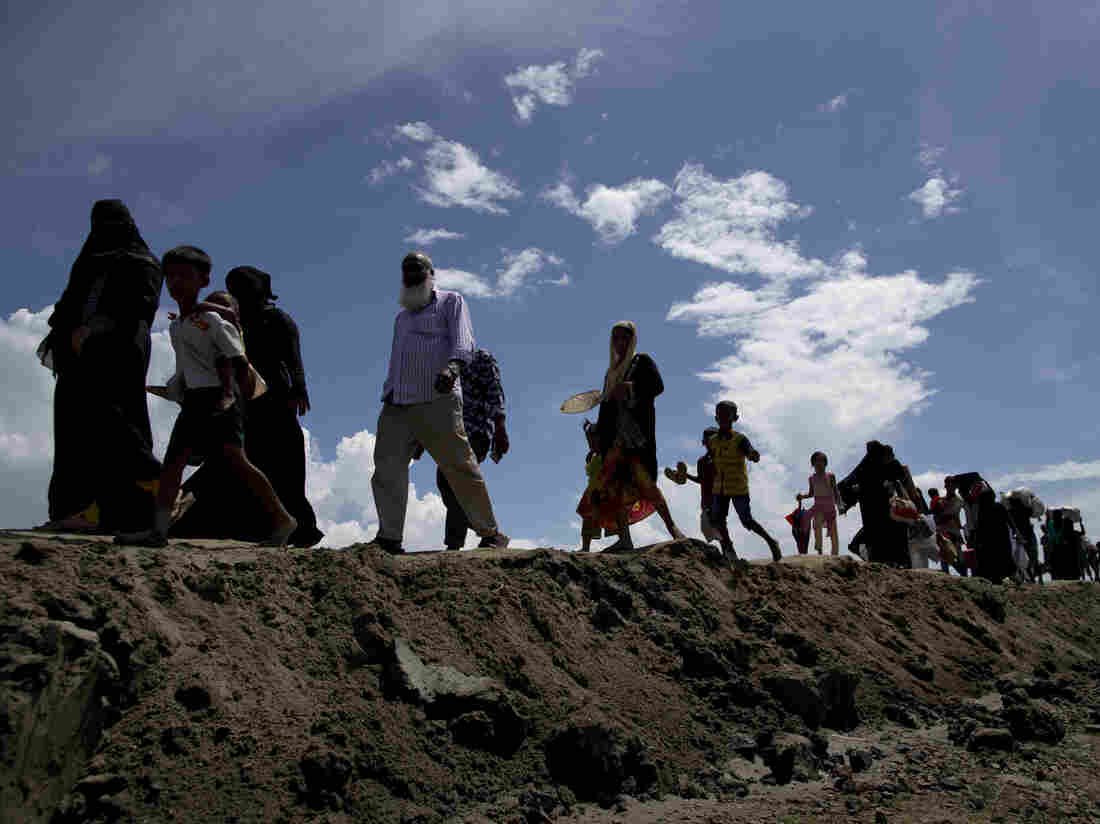 Newly arrived Rohingya Muslims from Myanmar walk to a camp for refugees in Teknaf, Bangladesh, on Monday. Hundreds of thousands of Rohingya refugees have streamed across the border following Myanmarese military retaliation for attacks by a Rohingya militant group. Gemunu Amarasinghe/AP hide caption 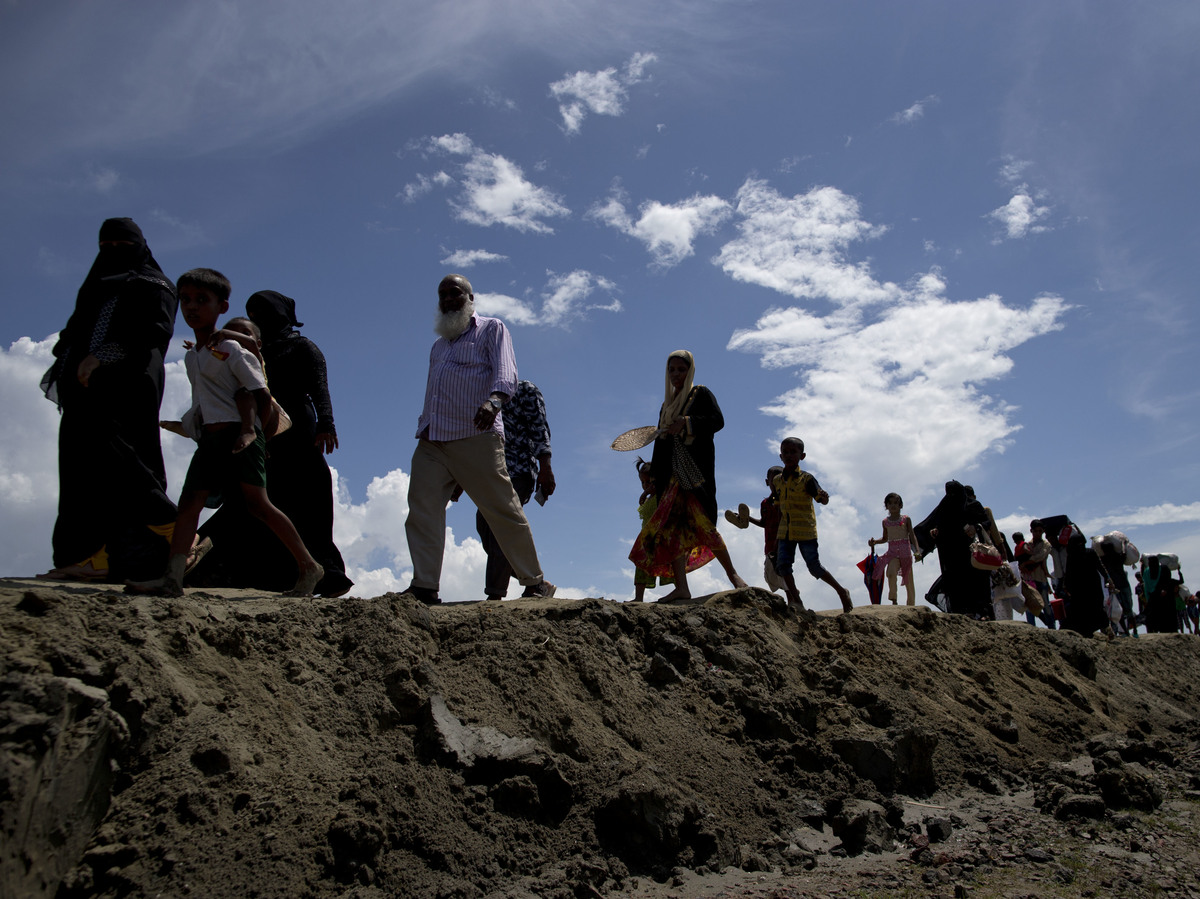 Newly arrived Rohingya Muslims from Myanmar walk to a camp for refugees in Teknaf, Bangladesh, on Monday. Hundreds of thousands of Rohingya refugees have streamed across the border following Myanmarese military retaliation for attacks by a Rohingya militant group.

In the early morning hours of of Aug. 25, Abul Kalam, a bearded, 35-year-old Muslim religious teacher, was sitting in his village in Myanmar's Maungdaw township when the call came.

"Our commander ordered us to attack the military post in our village," he says.

So he did, along with about 150 other men, he says. All were members of Myanmar's Rohingya Muslim minority, and many were volunteers recruited by a Rohingya militant group to fight against security forces.

Kalam — not his real name, but one he has asked us to use out of fear of retribution — says the attackers mostly used knives or homemade weapons. They had only two pistols, which they had seized from the security forces during a wave of attacks launched last October by the Rohingya militant group Arakan Rohingya Salvation Army.

About 50 of Kalam's fellow fighters were killed. The next day, he says, the military came and burned his village to the ground. He and other survivors fled with their families, he says.

They now live in a tent, high on a hill, in one of many makeshift camps that have sprouted just across the border in Bangladesh.

The attack Kalam took part in was one of dozens of simultaneous attacks on security posts in Myanmar's Rakhine State. The Myanmar military responded brutally, in what the United Nations human rights chief called a "textbook example of ethnic cleansing." And it has led to an exodus of more than half a million Rohingya to Bangladesh, something the U.N. says is "the world's fastest developing refugee crisis."

Another man who says he is an ARSA fighter, and wishes to be called Abu Alam, tells a story similar to Kalam's. In Abu Alam's case, 52 of his fellow Rohingya attackers were killed, he says.

The men's accounts couldn't be independently verified; Myanmar's government is not allowing independent access to Rakhine, and the ARSA leadership isn't talking. But the detail the men provided about the attacks and preparation for them is persuasive.

Despite their side's heavy losses, and the military's response, both men say the attacks were worth it.

"The world community hasn't been able to help us," Abu Alam says. "The Myanmar government hasn't listened to them. If we don't stand up for ourselves, we won't get our rights back. So we must fight, even if we die."

It's an opinion you hear a lot in Bangladesh's Rohingya refugee camps. Members of the ethnic Muslim minority have long been persecuted by the government of predominantly Buddhist Myanmar. Most are not even recognized as citizens.

But as people struggle now to survive in wretched conditions, with too little food, too little water and inadequate sanitation — conditions aid workers call a ticking time bomb for the spread of cholera and other waterborne diseases — there's a competing narrative: that ARSA overstepped, catastrophically. And innocent civilians are paying the price.

"I'm angry at the military for killing my husband," says 20-year-old Dildar Begum, a name she chose out of fear of reprisal. "But I'm also angry at those who told my husband to go fight with them."

Her husband, she says, was recruited by ARSA, then killed by the military in one of the Aug. 25 attacks. Dildar Begum took their 9-month-old baby and fled to Bangladesh.

Now she cradles her boy, trying to get him to stop crying. She is sitting in a shelter, and it's brutally hot. The people with whom she shares a tent are cooking behind a partition. The sun beats down on a plastic sheet that serves as a roof.

"Now my son is fatherless, my village is destroyed and we have nothing," she says. "It was stupid for them to attack like they did, without weapons." 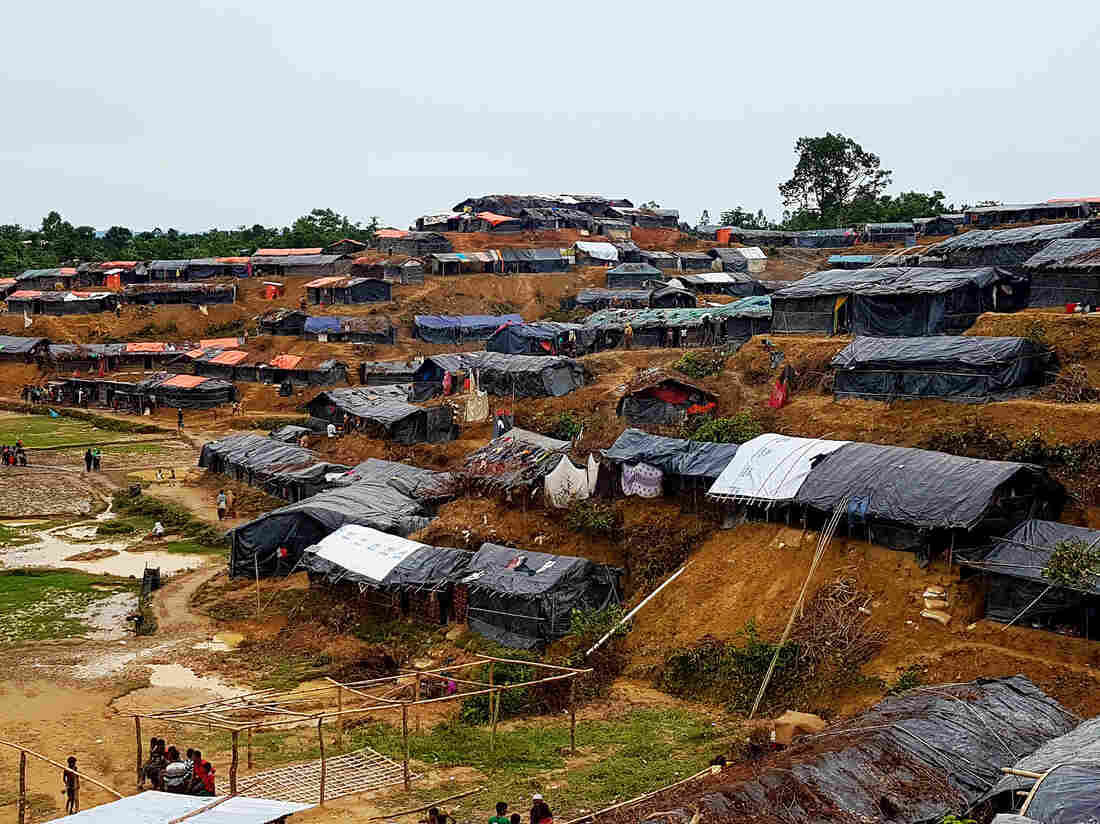 The Balukhali 2 camp in the Cox's Bazar district of Bangladesh is one of the places where Rohingya refugees have set up their makeshift shelters. Michael Sullivan for NPR hide caption 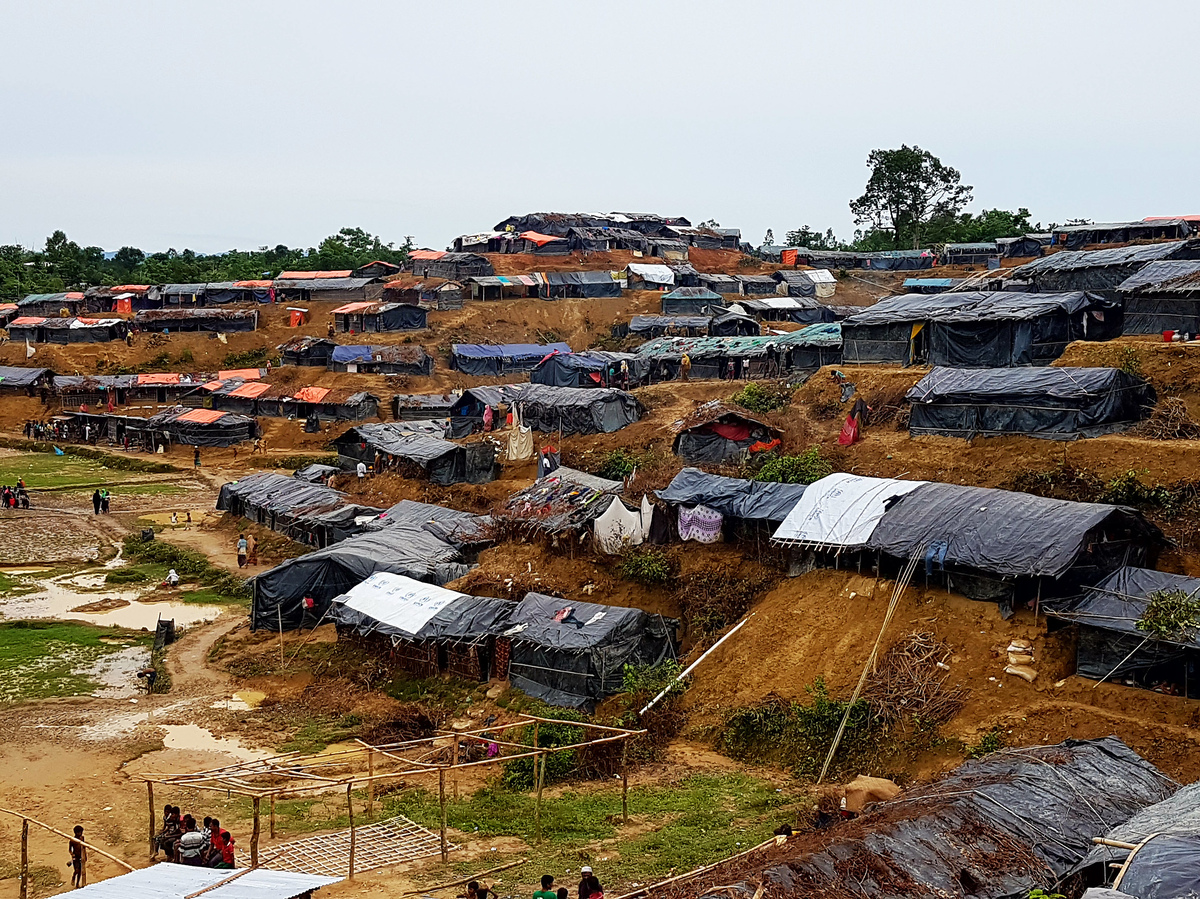 The Balukhali 2 camp in the Cox's Bazar district of Bangladesh is one of the places where Rohingya refugees have set up their makeshift shelters.

Syed Alom, another recent arrival, says he worked for an international nonprofit in Maungdaw township before fleeing. He also questions ARSA's tactics.

"It was a big mistake," he says. "If ARSA hadn't launched its attacks, the military wouldn't have reacted as it did. And there wouldn't be nearly half a million refugees here."

He wonders whether there might be a foreign influence behind ARSA, which formed just a few years ago, but doesn't elaborate.

ARSA denies any links to transnational terrorist groups like ISIS or al-Qaida. But the Myanmar military and some human rights groups have accused ARSA of brutality of its own — forced conscription, murdering suspected informers and killing members of other ethnic groups. And there are worries that ARSA's actions will attract foreign jihadists' interest.

"The actions that they took on Aug. 25 were appalling and clearly have sowed the seeds of tension and the violence that has ensued, and we condemn those attacks, " Deputy Assistant Secretary of State for Southeast Asia Patrick Murphy told NPR during a Sept. 22 conference call with reporters. "Whether this organization has ties elsewhere is not particularly germane given the fact that it could be creating an incentive for foreign terrorists to look at a new opportunity."

Elliot Brennan, an Australia-based independent researcher who specializes in Myanmar and Southeast Asia, warns that ARSA is making things worse.

"I don't think we'd be in the current situation if ARSA didn't exist," he says. "ARSA has accelerated bad outcomes for the community and they will continue to do so. Where we're at now is something new and very dangerous, an environment which is much more conducive to radicalization than we've ever had before."

Brennan doesn't see any clear links yet between international terrorism groups and ARSA. But other analysts do.

The ARSA leader, Ataullah Abu Amar Jununi, more often known as Ata Ullah, was born in the Rohingya diaspora in Pakistan and moved as a child to Saudi Arabia, according to the International Crisis Group.

Jihadist social media have lit up since the Aug. 25 attacks and subsequent military reprisal, with calls for volunteers to go to Myanmar to help ARSA fight against Myanmar's military.

"The propaganda machine of ARSA has been quite formidable as well," Brennan says. "That's not something we particularly see among other ethnic minority groups [fighting Myanmar's military] and does suggest there has been an outside hand in there, to some degree."

That outside hand, Brennan says, may be looking to get an inside track in a place where people have resisted advances from jihadist groups in the past. He and other analysts believe ARSA's attacks have given Myanmar's military a justification to do what many say it has wanted to do all along: drive the Rohingya from Myanmar once and for all.

The U.S. government seems to be coming around to a similar line of thinking.

"We cannot be afraid to call the actions of the Burmese authorities what they appear to be, a brutal, sustained campaign to cleanse the country of an ethnic minority," the U.S. ambassador to the U.N., Nikki Haley, told the Security Council last week.

Before the latest wave of violence, that ethnic minority was estimated to number between 1.1 million and 1.3 million people in Myanmar. Nearly half of them have now fled to neighboring Bangladesh. And they keep coming.