Accessibility links
In China, Scholars Are Being Punished Amid Growing Squeeze On Public Expression : Parallels Space for public expression has been tightening in media, the arts — and now in higher education as well. Some university professors have been fired for expressing views outside the mainstream.

Listen · 3:39 3:39
In China, Scholars Are Being Punished Amid Growing Squeeze On Public Expression 3:39 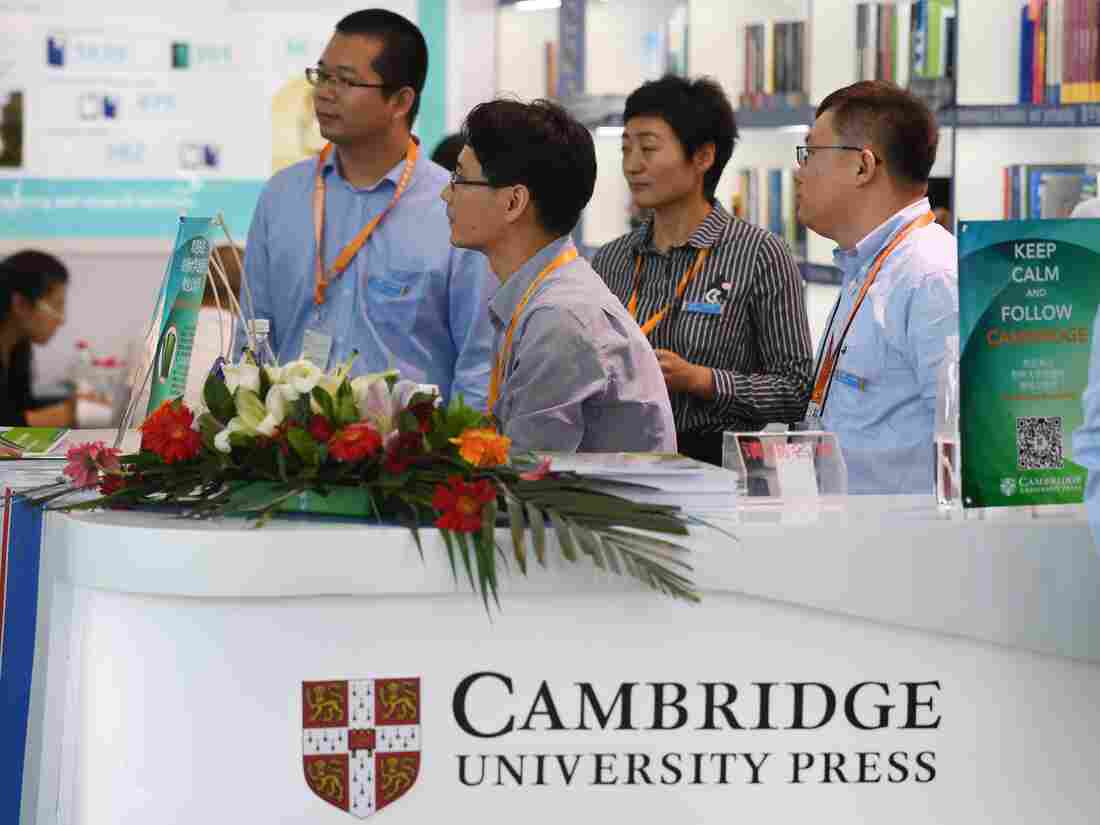 Staff wait at the Cambridge University Press stand at the Beijing International Book Fair in August. An international outcry ensued when the publisher agreed to block certain articles from one of its journals after pressure from Beijing. The press later reversed its decision. Greg Baker/AFP/Getty Images hide caption 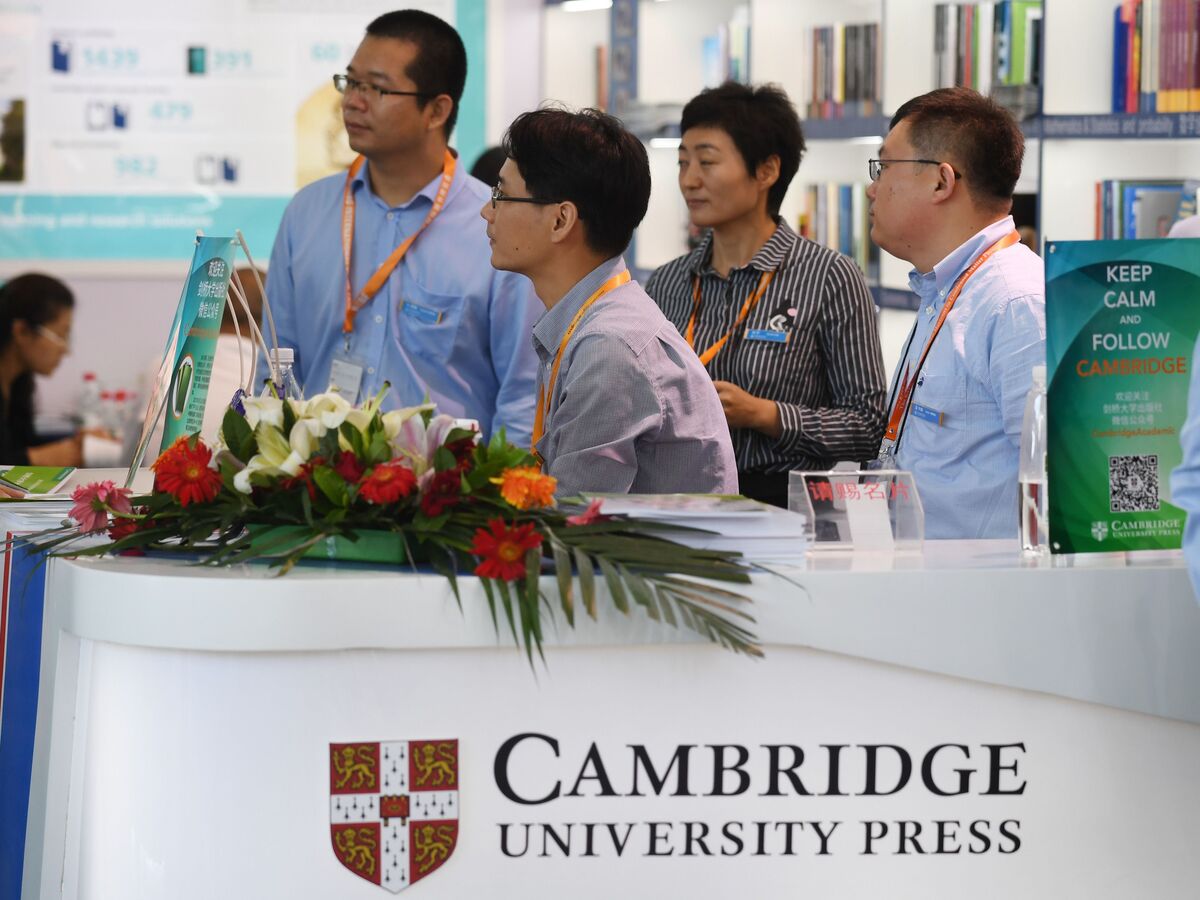 Staff wait at the Cambridge University Press stand at the Beijing International Book Fair in August. An international outcry ensued when the publisher agreed to block certain articles from one of its journals after pressure from Beijing. The press later reversed its decision.

When students returned to Beijing Normal University for classes last month, there was a notable absence in the classical Chinese class taught by Shi Jiepeng: Shi himself.

University authorities fired the assistant professor in late July, citing a number of offenses, including "expressing views outside the mainstream of society."

The charges still puzzle the lanky teacher, as he sits speaking to me in a café just outside the university's main gate.

"Sure, my views are a bit different from the mainstream and from official views," he concedes. "But an open society should be able to tolerate them."

China apparently can't. In the past five years, space for public expression has been tightening in media, the arts and civil society. Education hasn't been spared: The ruling Communist Party and congress have ordered the country's institutions of higher learning to build themselves into bastions of socialist and Marxist ideology, while purging campuses of liberal thought and subversive foreign ideas.

The drive could have an impact on one of China's stated ambitions, to boost its colleges and universities into the world's finest. It seems sure to affect the millions of Chinese students who seek education in the U.S. and other countries, as well as foreign scholars studying China.

Spearheading the drive is the Central Commission for Discipline Inspection (CCDI), the party's internal control apparatus, which, besides rooting out corruption, appears to have taken on the additional duty of enforcing political loyalty and ideological conformity in academia.

This year, the CCDI sent inspection teams to around 30 of China's top universities. Roughly half were named and criticized for their "weak political work."

When CCDI inspectors arrived at Beijing Normal University in February, conservatives who objected to Shi Jiepeng's ideas reported him to the team.

"The party secretary of my institute told me that the inspectors had criticized me by name," Shi says.

Clashing with the party line

Shi was not fired for his teaching or academic work. He says his students never complained about his classes. Instead, the inspectors appear to have targeted him because of columns he wrote for a newspaper and his postings on social media.

Oddly, Shi points out, university administrators seem to have overlooked the fact that the CCDI is supposed to enforce Communist Party rules — but since he isn't a party member, it should have no jurisdiction over him. (China has roughly 88 million Communist Party members, or less than 7 percent of the population).

Beijing Normal University didn't respond to NPR requests for comment. Nor did China's Ministry of Education.

In his social media postings, Shi criticized Mao Zedong, the leader of China's Communist revolution, as a "demon" for his role in political mass movements including the Great Leap Forward and the Cultural Revolution, which cost millions of lives due to political violence and famine.

Shi points out that the party itself admits that Mao made mistakes, so he feels this shouldn't have gotten him fired. But if such statements were not grounds for substantial punishment a few years ago, they apparently are now: Another scholar was fired by an architectural university in Shandong Province in January after he criticized Mao.

Shi Jiepeng's criticism of another Chinese ruler — an ancient one — also ticked off many conservatives.

Emperor Wu of the Han Dynasty ruled China a few decades before Julius Caesar ruled ancient Rome. Wu's wars of conquest against nomadic tribes on China's borders expanded the Chinese empire in all directions, but an estimated one-fifth of the empire's population perished in military adventures, forced labor on huge infrastructure projects and mass executions of anyone suspected of plotting rebellion.

Shi says he criticized Wu "because I believe the welfare of the individual is more important than any ruler's political or military achievements."

Shi has also expressed the opinion that individual welfare is more important than the form or structure of any nation. So he sympathizes with Hong Kong and Taiwan residents who do not identify with China and might advocate independence. He sees local identity as an important kind of freedom.

All of these ideas clash with the official Chinese line that a unitary state, rather than a collection or federation of smaller states, is the only acceptable form for China. Discussion of alternative forms of statehood is forbidden.

Shi has never been prosecuted for breaking any law. But the Communist Party made clear in a 2013 internal document what ideas it considers taboo and does not want taught on college campuses: constitutional democracy, judicial independence, freedom of the press and an independent civil society – in other words, liberalism.

After being fired, Shi turned for advice to a prominent liberal historian named Zhang Ming, who recently retired from the People's University in Beijing.

"No doubt, politics are veering to the left, and there's an ideological purge going on," he says. "But I don't think there's a comprehensive official plan for it all."

For decades, university administrators have been able to ignore or deflect government political campaigns, letting offending academics off with a slap on the wrist. But now it appears the political pressure is too intense, and administrators "are afraid of losing their official jobs," says Zhang.

Zhang says he advised Shi to protest his treatment and not suffer in silence. Zhang's own conservative critics repeatedly called for him to be fired, but his university ignored them.

"If they fire me, then they fire me, it's not like I'm going to starve to death," Zhang sniffs. Unlike under Mao, unemployed academics these days can always find work elsewhere, he says.

Indeed, the current campaign pales in comparison to the biggest purge of intellectuals under Communist rule. The so-called "anti-rightist movement" launched by Mao in 1957 handed many workplaces quotas of rightists (who, in the Chinese context are generally political liberals) to be identified and punished. An estimated half-million people were persecuted.

Mao distrusted intellectuals because of their independent thought. During the 1966-1976 Cultural Revolution, they were denounced and persecuted as a "stinking ninth caste," and students were encouraged to beat and humiliate their teachers. From the 1960s through 1990s, college professors were often paid less than manual laborers.

The effect of China's ideological tightening on international scholarship became clear in August, when Chinese censors succeeded briefly in getting the Cambridge University Press to censor articles from an online edition of its influential scholarly journal, the China Quarterly.

The 315 articles were about subjects China's government considers politically sensitive, including Taiwan, Tibet and the 1989 Tiananmen Square massacre.

The publisher's explanation of why it at first complied was "to ensure that other academic and educational materials we publish remain available to researchers and educators in this market." But the move triggered an intense outcry from international scholars concerned about academic freedoms, and the material was restored.

Cambridge University Press' decision to pull the material "was bad not just because it meant that academics in China were deprived of access to state-of-the art scholarship from another part of the world," says University of California, Irvine historian Jeffrey Wasserstrom. Worse, he says, it misled people in China "into imagining that a journal was not publishing what it in fact was. So it violated the integrity of the journal."

Chinese authorities also tried to censor another Cambridge University Press publication that Wasserstrom edits, the Journal of Asian Studies. But after the outcry over the China Quarterly, the authorities dropped their request.

The current ideological purge and the attempted censorship is a worrisome step backward, says Wasserstrom, after years in which foreign scholars were "more able to have true collaborations" with their Chinese counterparts.

"There's a tendency to think that since Mao's death in 1976, that with some occasional slips back, there's been at least a two-steps-forward, one-step-back pattern, in a kind of lessening of controls on campuses," he says. But for the past seven or eight years, things have been moving in the wrong direction, he says.

Beijing Normal University's Shi Jiepeng consoles himself by taking the long view. During China's imperial dynasties, he says, intellectuals were often persecuted for what they wrote. That form of persecution is known as a "literary inquisition."

"Back in those days, people's whole families were executed," he says. "Me, I only lost my job. So things are much better now."