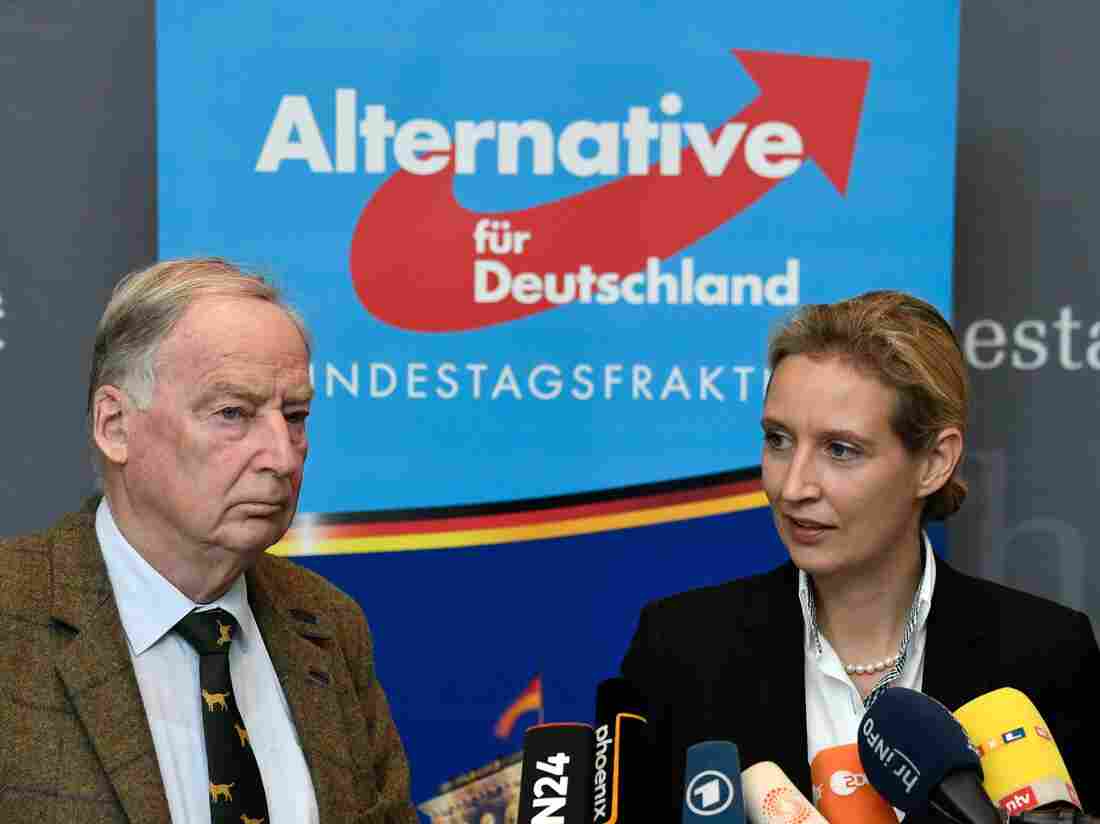 Alexander Gauland, 76, and Alice Weidel, 38, are the leaders of the populist, anti-immigrant Alternative for Germany party. They will both take seats in the country's Parliament later this month. John Macdougall/AFP/Getty Images hide caption 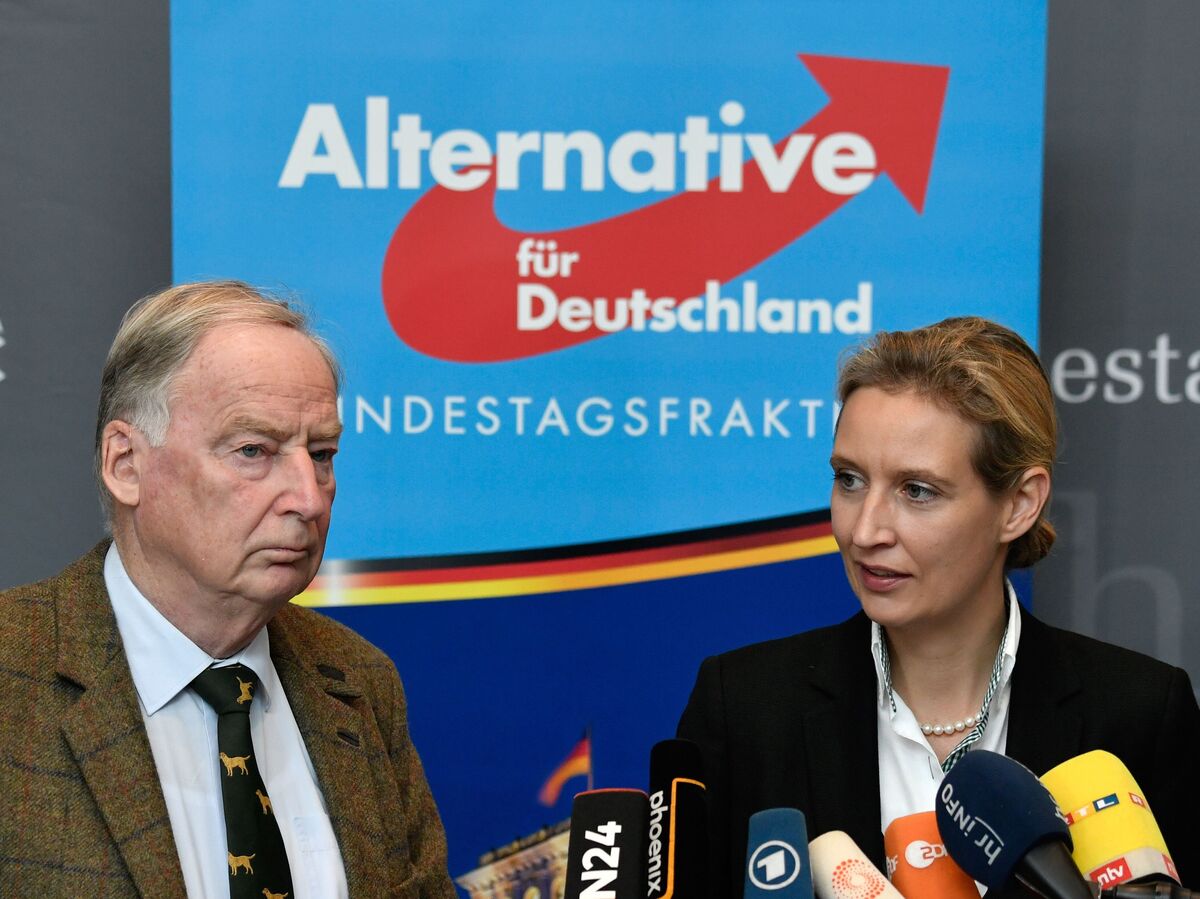 Alexander Gauland, 76, and Alice Weidel, 38, are the leaders of the populist, anti-immigrant Alternative for Germany party. They will both take seats in the country's Parliament later this month.

When Germany's Parliament convenes later this month, members of a far-right party will take seats for the first time since the 1950s. The Alternative for Germany (AfD) came in third in last month's parliamentary elections and promises to raise its voice in the opposition.

Alice Weidel and Alexander Gauland took the reins of the populist, anti-immigrant party after internal disputes led to the resignation of former leader Frauke Petry, who has since vowed to form her own party. Weidel and Gauland are separated in age by nearly four decades and come from markedly different backgrounds, but analysts say they make an effective pair.

Alice Weidel: 'For my children'

Weidel, 38, a former investment banker with Goldman Sachs, joined the AfD in 2013 and was elected as its co-lead candidate in April.

Her party favors xenophobic positions, but Weidel has lived abroad and speaks conversational Mandarin. The AfD manifesto favors a "traditional family" having "a father, mother and children"; Weidel is openly lesbian and is raising two children with her partner Sarah Bossard, a Switzerland-based film producer.

When asked about her motivation for joining the AfD, Weidel told the Frankfurter Allgemeine newspaper, "I do not want to be reproached later for having not tried. I do it as well for my children."

Toralf Staud, a German journalist who closely follows right-wing extremism, is not surprised by incongruities between Weidel's private life and her political ideology.

"Look at Trump," he says. "Grabbing women's genitals and being proud of it is not the core character of a conservative. When other matters are more influential for the voting decision, people look beyond the character deficits and programmatic contradictions."

Earlier this year, reports circulated that a Syrian asylum seeker was working illegally in Weidel's family home in Switzerland.

In a statement, Weidel explained she had befriended a Syrian refugee family more than two years earlier. She emphasized that the family was Christian and said they had been persecuted by the Islamic State.

After helping them with the challenges of being new in a foreign country — paperwork, translation, finding a place to live — she said the Syrian family wanted to give something back and had volunteered to help around the house.

Alexander Gauland: 'The CDU has left me'

The 76-year-old Gauland, born and raised in the former East Germany, has been in politics most of his life. A lawyer by training, he spent 40 years on the center-right as a member of the Christian Democratic Union (CDU), led now by Chancellor Angela Merkel. He is renowned as a speechwriter and held various roles at the state level.

Gauland fled East Germany in 1959 to study in the West. When a German newspaper asked if this made him a refugee, he responded: "To call me a refugee is an impudence. I was not a refugee, I was a German in Germany."

From 1991 to 2005, Gauland — who's known for wearing ties with dog patterns — was one of the publishers of a regional newspaper in Potsdam. His media experience has been helpful ever since: He understands how to provoke, how to push boundaries and break taboos.

He provoked outrage last month when he said Germans should be "proud of the achievements of the German soldiers in two world wars."

In 2013, Gauland turned his back on the CDU because he had trouble identifying with its political re-positioning toward the left. Speaking of his decision to join the AfD, Gauland said, "The CDU has left me, not the other way round."

He has attacked it ever since. He promised after the election that he would "hunt Frau Merkel ... and we will reclaim our country and our people."

According to analysis of last month's election results, a million AfD voters were former CDU supporters.

Some argue Gauland may be using the AfD as a populist instrument to try and push the CDU back to more conservative positions. But others believe his words suggest he's fully embraced the AfD.

Recently, Gauland proposed to "dispose of" Aydan Ozoguz, Germany's commissioner for immigration, refugees and integration, by sending her to Turkey. And last year, speaking of refugees, he said: "We have to endure the cruel images and keep the borders closed. We cannot be blackmailed by the eyes of kids."

Gauland's daughter, Dorothea Gauland, works as a pastor and has distanced herself from her father's rhetoric. She welcomed an Eritrean refugee into her parish in Ruesselsheim, near Mainz, and has called her father's statements about immigrants and closing borders "terrible."

'Both quite fit with the AfD'

Peter Matuschek, director of political opinion research at Germany's Forsa polling firm, says that AfD supporters are not primarily motivated by individual leaders, but by ideology.

"This is what separates them from the supporters of all other parties," Matuschek says. "This is why the biography of Ms. Weidel has no influence on the degree of support for the AfD."

The AfD's internal disputes over leadership have not harmed the party's support either, he says.

Hendrik Traeger, a political scientist at the University of Leipzig who has closely followed developments in the AfD, believes the differences between Gauland and Weidel work to the party's advantage.

"Gauland and Weidel are very different personalities, but both quite fit with the AfD," he says. "They possibly attracted different segments of voters."