Accessibility links
Tokyo Governor Hopes Her New 'Party Of Hope' Will Shake Up Japanese Politics : Parallels Yuriko Koike, the best known woman in Japanese politics, started a new party ahead of Sunday's snap election for parliament. But it's having trouble distinguishing itself from the ruling party. 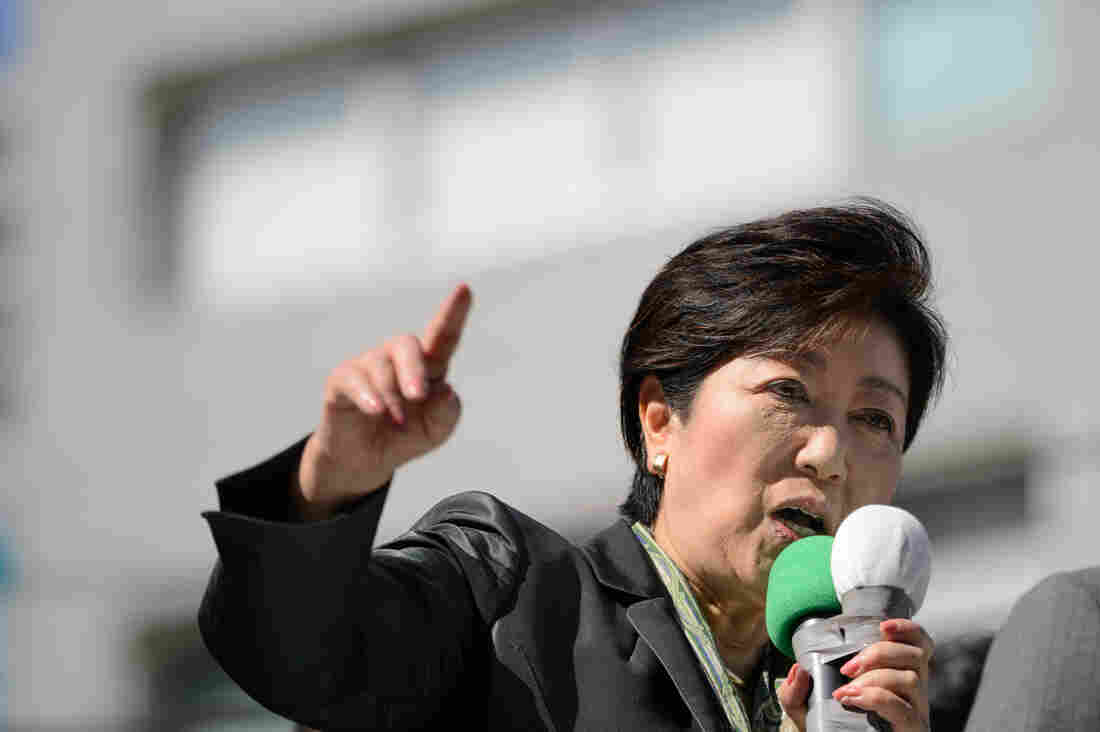 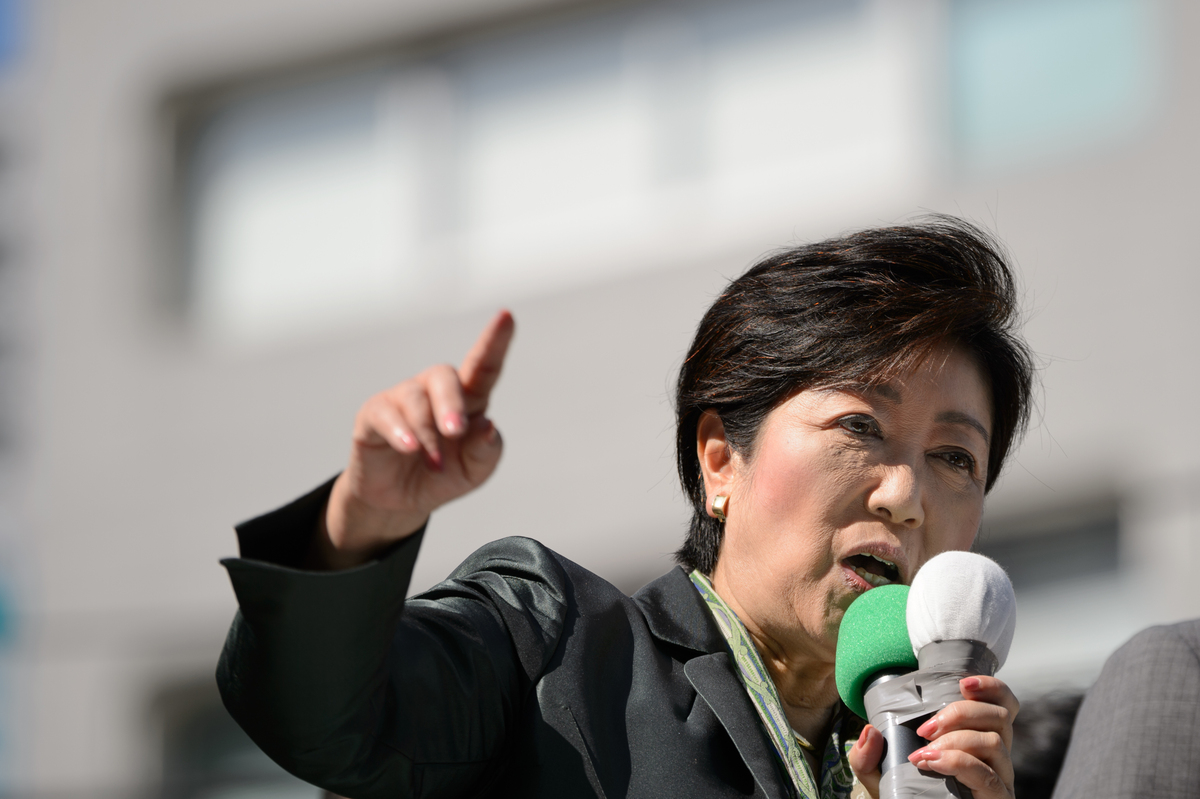 Yuriko Koike speaks at an election campaign rally in Tokyo on Oct. 10.

Japanese voters have just days left to decide who they will support in a snap general election set for Sunday.

Japanese politics are usually tame. But this time around, the charismatic governor of Tokyo is adding unexpected elements to the race.

Yuriko Koike is keeping a nonstop schedule these days — dashing from one campaign event to another. Last Friday, rain didn't keep her from revving up crowds at rush hour in Shibuya, the Tokyo district renowned for the giant crush of people at its street crossing.

Women Are Making Their Voices Heard In Male-Dominated Japanese Politics

"Let us look at what we can do now to change Japan, and dare ourselves to do so," Koike said, speaking of her Kibo no To party — which translates to Party of Hope. The party emerged just weeks ago to challenge the ruling party led by Prime Minister Shinzo Abe.

"For seizing the issues and recognizing that there was a window of opportunity, I think she deserves a good deal of credit," says Tobias Harris, a Japan analyst with Teneo Intelligence.

Koike is a savvy politician and a telegenic former news broadcaster. She used to be aligned with Prime Minister Abe, serving in his cabinet and as a member of his Liberal Democratic Party. But things went sour after she wasn't returned to high-profile roles. She ran for Tokyo governor as an independent last year, besting an LDP candidate for the job. 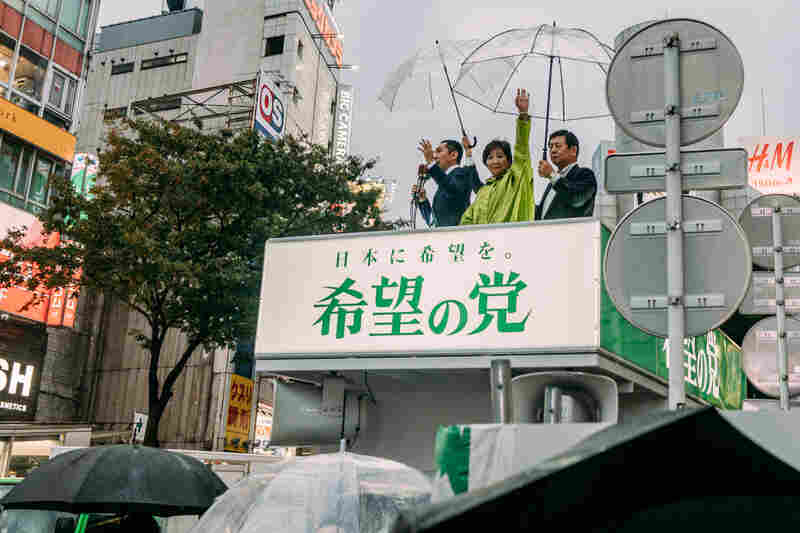 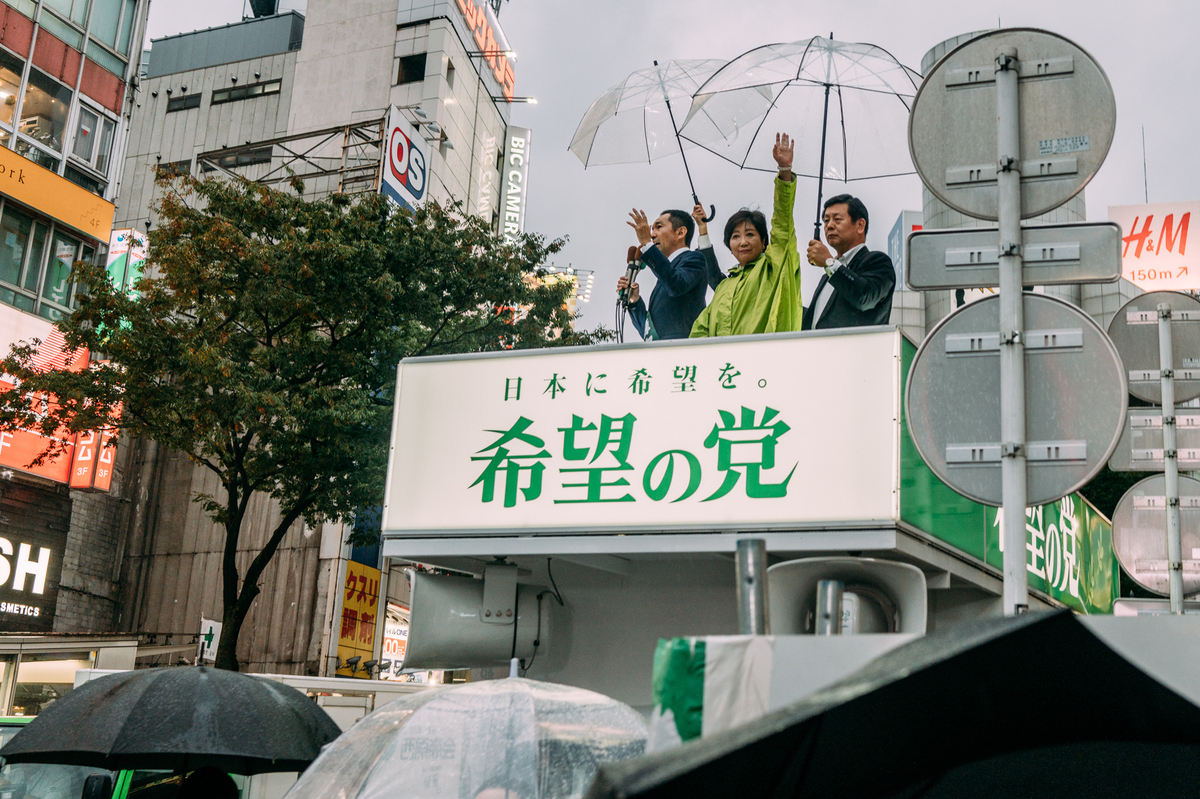 Tokyo Governor Yuriko Koike greets supporters in the rain during a campaign stop in the Shibuya district last Friday.

Now she's taking the unusual step of leading her new party — whose members are drawn from the former Democratic Party — despite not running for a parliamentary seat herself. The Democratic Party is nearly defunct but still has some candidates in Upper House elections.

"One wonders the extent to which it is personal. She had basically been shunted off to the side, and this is her revenge," Harris says.

As Tokyo governor since last year — and one of Japan's rare female leaders — Koike stands out. Japan ranks near the bottom among other developed countries when it comes to gender equality, especially among political and business elites.

Naoko Shimazaki, among those attending Koike's Shibuya campaign event, put it this way: "That she's able to succeed as a woman and since she's promoting the appointment of women, I think that's a positive trend for businesses and for society in general."

Talk of Koike running for prime minister someday is common.

"Whatever happens with this election," says Taro Oguchi, a 19-year-old student getting ready to vote for the second time in his life, "I think that if Ms. Koike could become a possible candidate for prime minister, I'd like to support her."

As governor, Koike has the 2020 Tokyo Olympics on the horizon, but she could try and re-enter the parliament before then. For now, there's no sign she's slowing down. Her campaign stop in Shibuya was one of seven or eight daily public events she has scheduled in the run-up to Sunday's balloting.

"We in the Party of Hope are not trying to be left or right — but right in the center," Koike says in her stump speech.

But that, analysts say, is actually part of a problem. Not presenting enough of a difference between her party and the prime minister's means voters lack a clear policy alternative.

"If the alternative appears to be there, voters will turn out. But if it's not, they'll stay home," Harris says.

John Matthews contributed to this story.