Accessibility links
'Impossible To Save': Scientists Are Watching China's Glaciers Disappear : Parallels Xinjiang has nearly 20,000 glaciers, half of China's total. They're all receding at a record pace — and will continue to melt, some scientists warn, even if global temperatures stop rising. 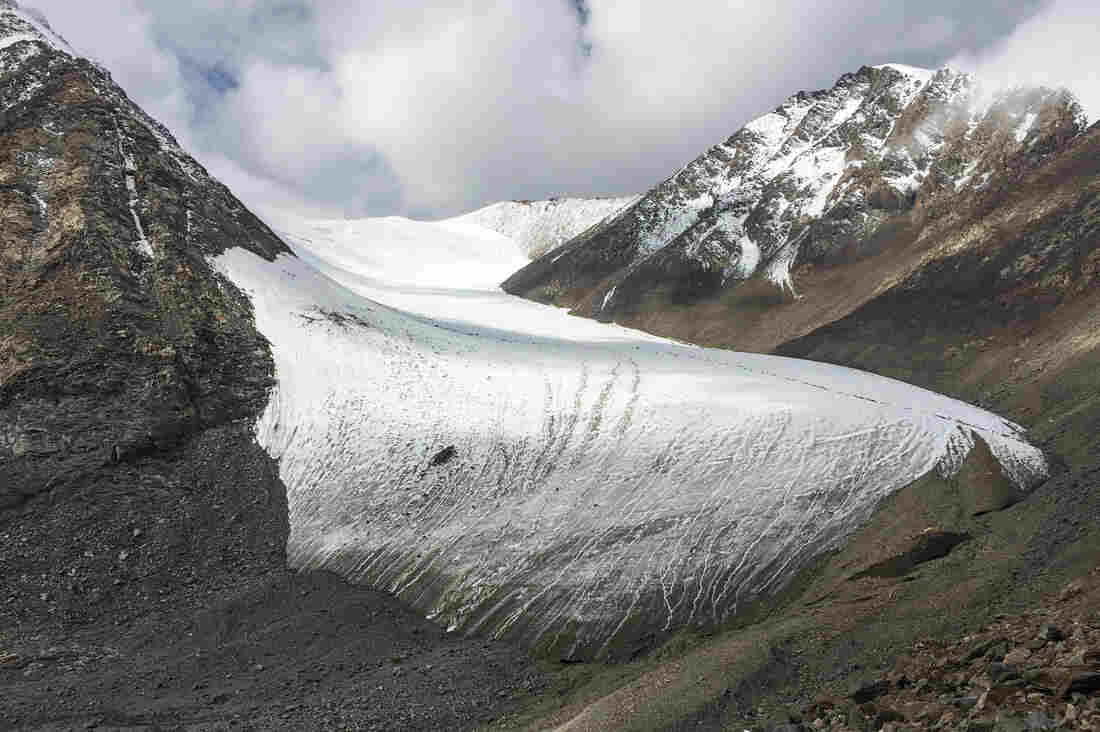 The Tianshan No. 1 glacier is melting fast, receding by at least 30 feet each year. Scientists warn that the glacier — the source of the Urumqi River, which more than 4 million people depend on — may disappear in the next 50 years. Rob Schmitz/NPR hide caption 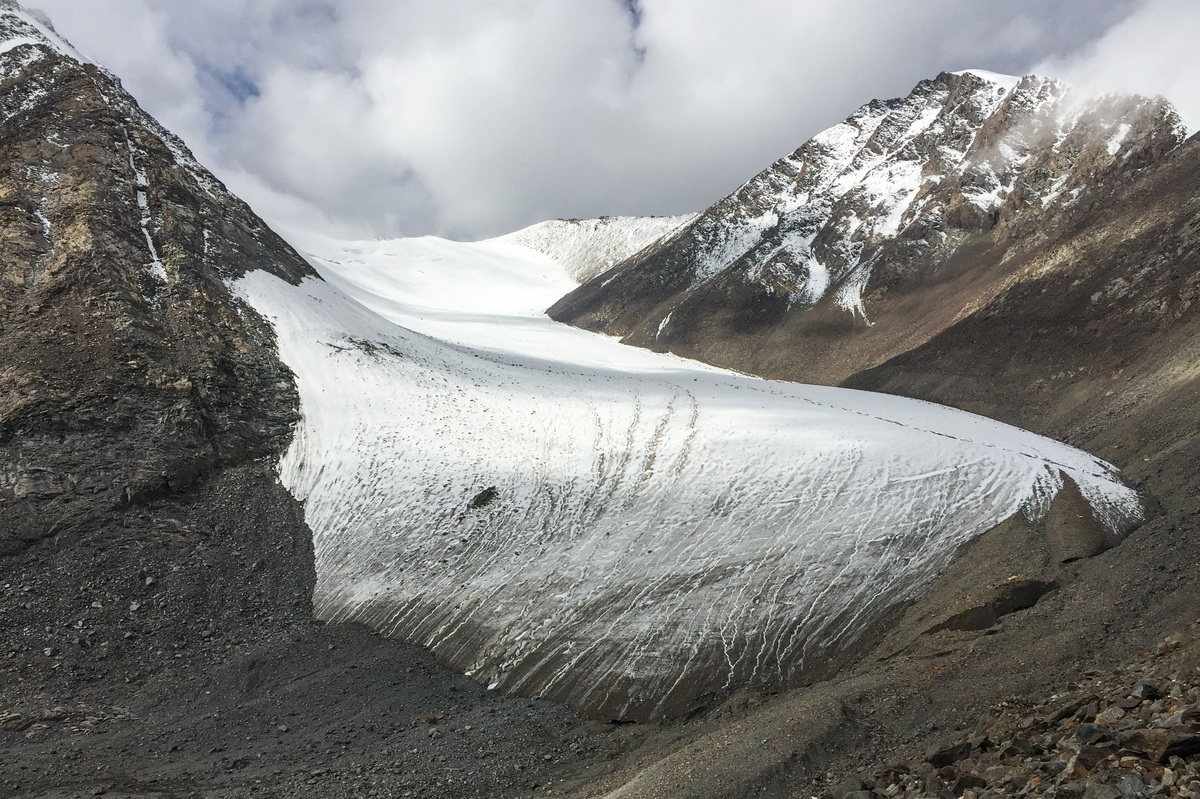 The Tianshan No. 1 glacier is melting fast, receding by at least 30 feet each year. Scientists warn that the glacier — the source of the Urumqi River, which more than 4 million people depend on — may disappear in the next 50 years.

At the end of every summer, scientist Li Zhongqin takes his seasonal hike near the top of a glacier in the Tianshan mountains in China's far northwestern region of Xinjiang.

Li scrambles over a frozen ridge and heads toward a lone pole wedged in the ice. Clouds emerge from a peak above and quickly blow past. He stops to catch his breath. He is at 14,000 feet. The snow is thick. The air is thin.

"This is called a sight rod," he says, grasping the pole. "We come up here each month to check it, to see how fast the glacier's melting. Each year, the glacier is 15 feet thinner."

Li, who heads the Tianshan Mountains Glaciological Station of the Chinese Academy of Sciences, points to a valley beyond a valley of boulders below to another glacier in the distance. "Twenty years ago, when I was a young scientist, these two glaciers were connected," he says. "But now, look: They're completely separate. Things are changing very, very quickly." 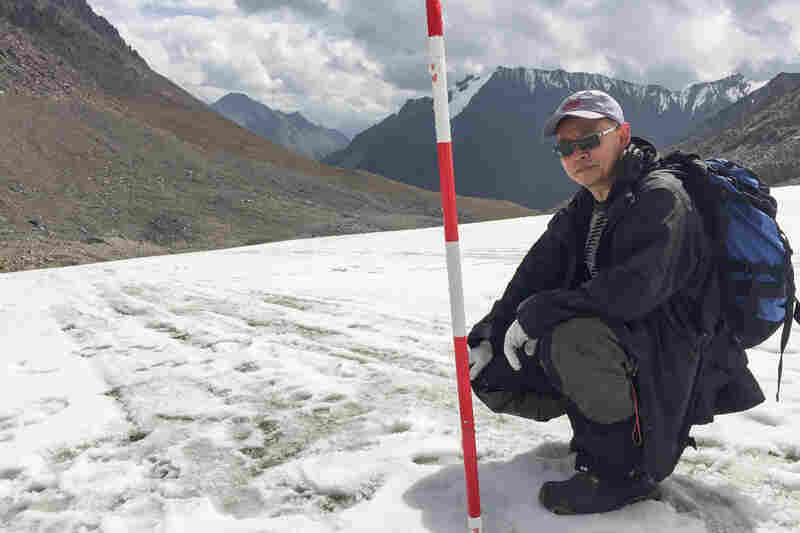 Scientist Li Zhongqin has studied the glaciers of Xinjiang for most of his life. He says at the current rate of global warming, the glacier he studies most will be gone within 50 years. Rob Schmitz/NPR hide caption 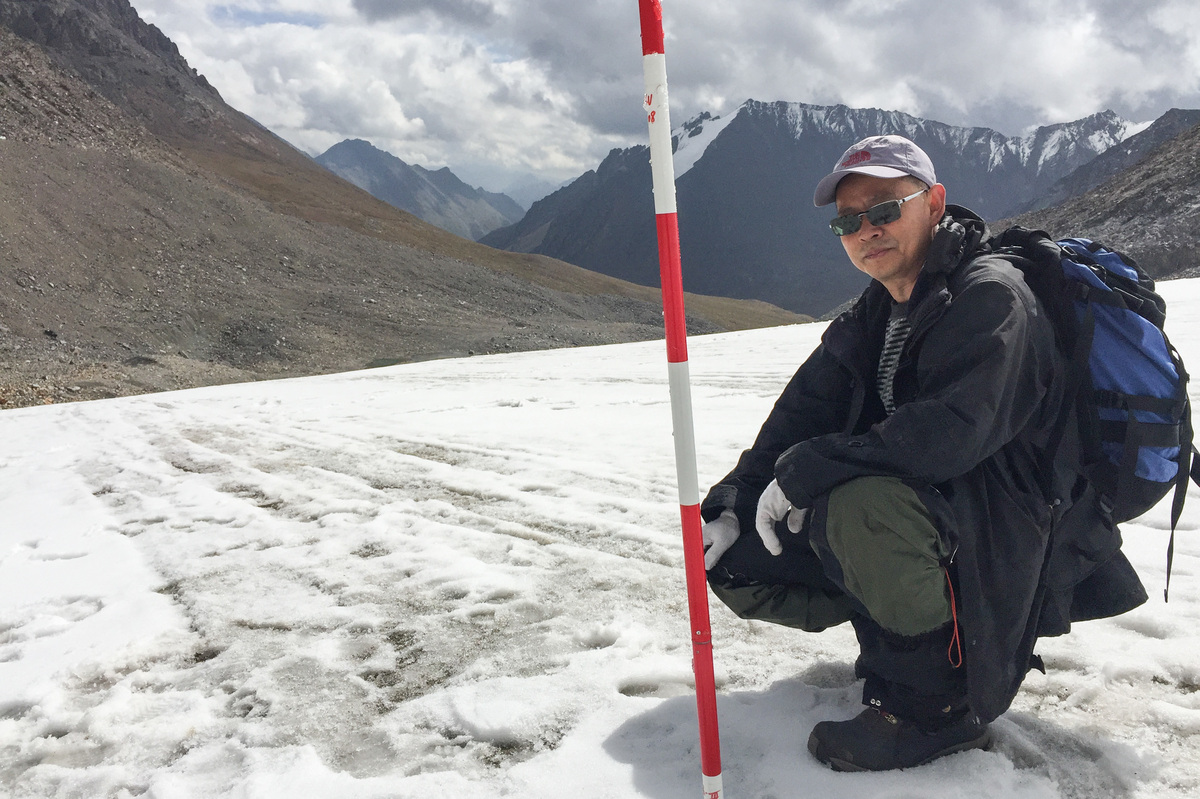 Scientist Li Zhongqin has studied the glaciers of Xinjiang for most of his life. He says at the current rate of global warming, the glacier he studies most will be gone within 50 years.

Xinjiang, a land of mountains, forests and deserts, is four times the size of California and is home to 20,000 glaciers — nearly half of all the glaciers in China. Since the 1950s, all of Xinjiang's glaciers have retreated by between 21 percent to 27 percent.

In the past 50 years, says Li, the average global temperature has risen by 1 degree Celsius (1.8 degrees Fahrenheit). As a result, these glaciers — split from the original Tianshan No. 1 glacier into No. 1 East and No. 1 West — are retreating by around 30 feet each year.

Li calls out to scientists hiking nearly 1,000 feet above. In their bright parkas, they look like neon-colored ants. They call back, their voices bouncing off an ice and stone amphitheater that cradles the eastern glacier.

Scientists are the only people allowed here. The government has banned tourism on the glacier and shut down factories in the town below, laying off 7,000 workers to try to lessen the impact of pollution.

But local sources of pollution account for just 30 percent of the damage to glaciers, says Li. The other 70 percent is caused by global carbon emissions that have warmed the entire planet.

The central goal of the 2015 Paris Agreement on climate change — which the Trump administration has promised to pull the U.S. out of, but to which China is still a party — is to limit the rise in global average temperature to 2 degrees Celsius (3.6 degrees Fahrenheit). Tianshan is one of those rare places where the impact of climate change policy can be measured and seen.

"If every country sticks to the emissions reductions in the Paris Agreement, these two glaciers will be around for another hundred years," says Li. "If not, then temperatures will continue to rise, and the glacier we're walking on? It'll be gone in 50 years."

And that, says Li, is a problem for this entire region.

These glaciers are the source of the Urumqi River, which provides water for half the city of Urumqi, the largest in the region and home to nearly 4 million people.

But that is not all that is at risk. 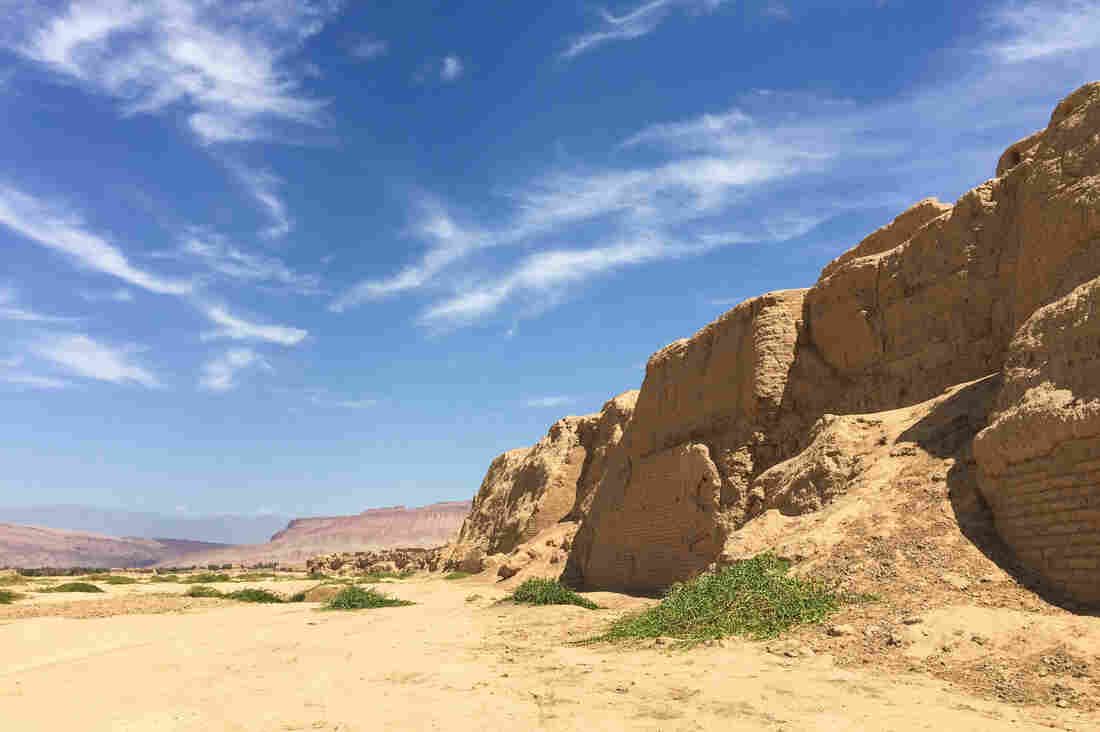 Turpan is home to Gaochang, an ancient city that lies in one of the hottest deserts in the world. Rob Schmitz/NPR hide caption 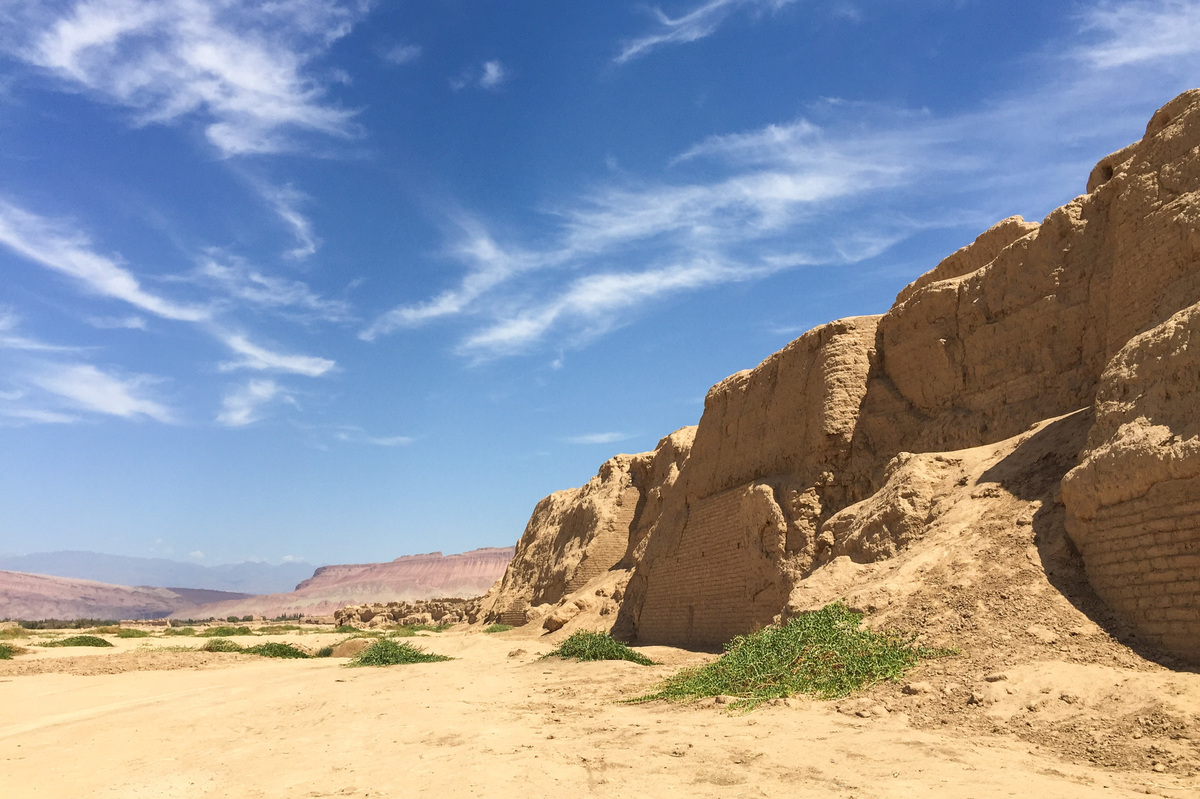 Turpan is home to Gaochang, an ancient city that lies in one of the hottest deserts in the world.

"You see that fog coming off the surface?" asks Li, pointing to the top of the glacier. "This glacier creates clouds, which in turn creates rain and snow elsewhere. Without this glacier, this region will start to dry up."

Two hundred miles away, at the foot of the mountain range, conditions couldn't be more different. At a grape orchard near the city of Turpan, it is 70 degrees warmer. This city sits on the edge of the Taklamakan Desert and is considered the hottest place in China — and the lowest, at 500 feet below sea level.

This area gets, on average, half an inch of rain per year. But it's an agricultural powerhouse. Nearly all of China's grapes are grown in this valley. The water this region depends on arrives in the form of snowmelt from faraway glaciers, flowing here through thousands of miles of underground tunnels called karez, an ancient irrigation system built 2,000 years ago. Turpan's karez wells are considered one of the great engineering feats of ancient China.

Down a hole in the parched, yellow earth, cool water from the mountains flows through the karez beneath the vineyard of Magcorjan Abdurehim. The farmer stands in the hot sun, worried. 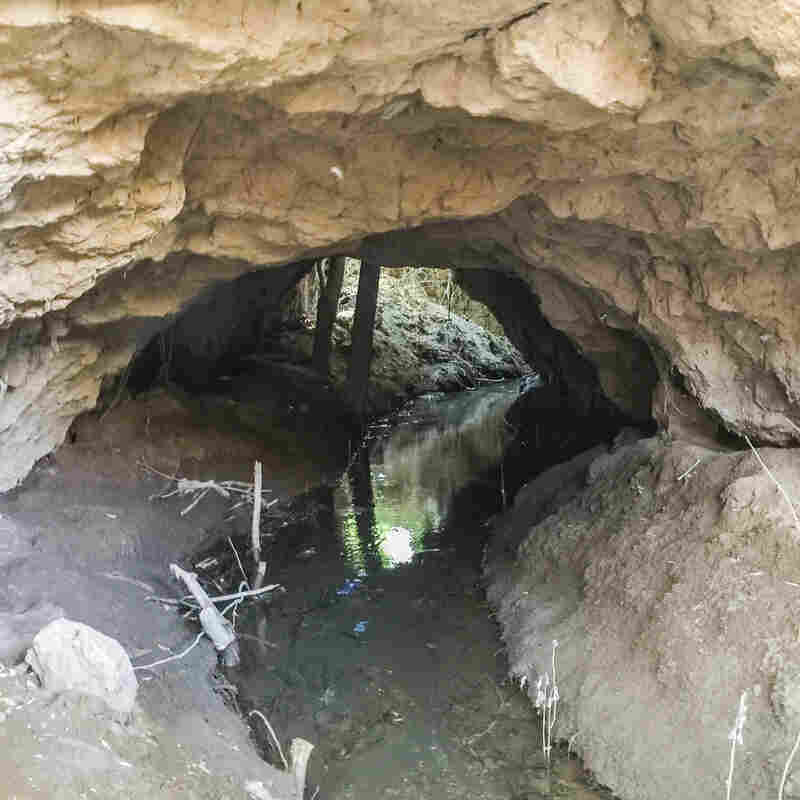 A karez in Turpan is part of a 1,000-mile network of ancient water tunnels. Rob Schmitz/NPR hide caption 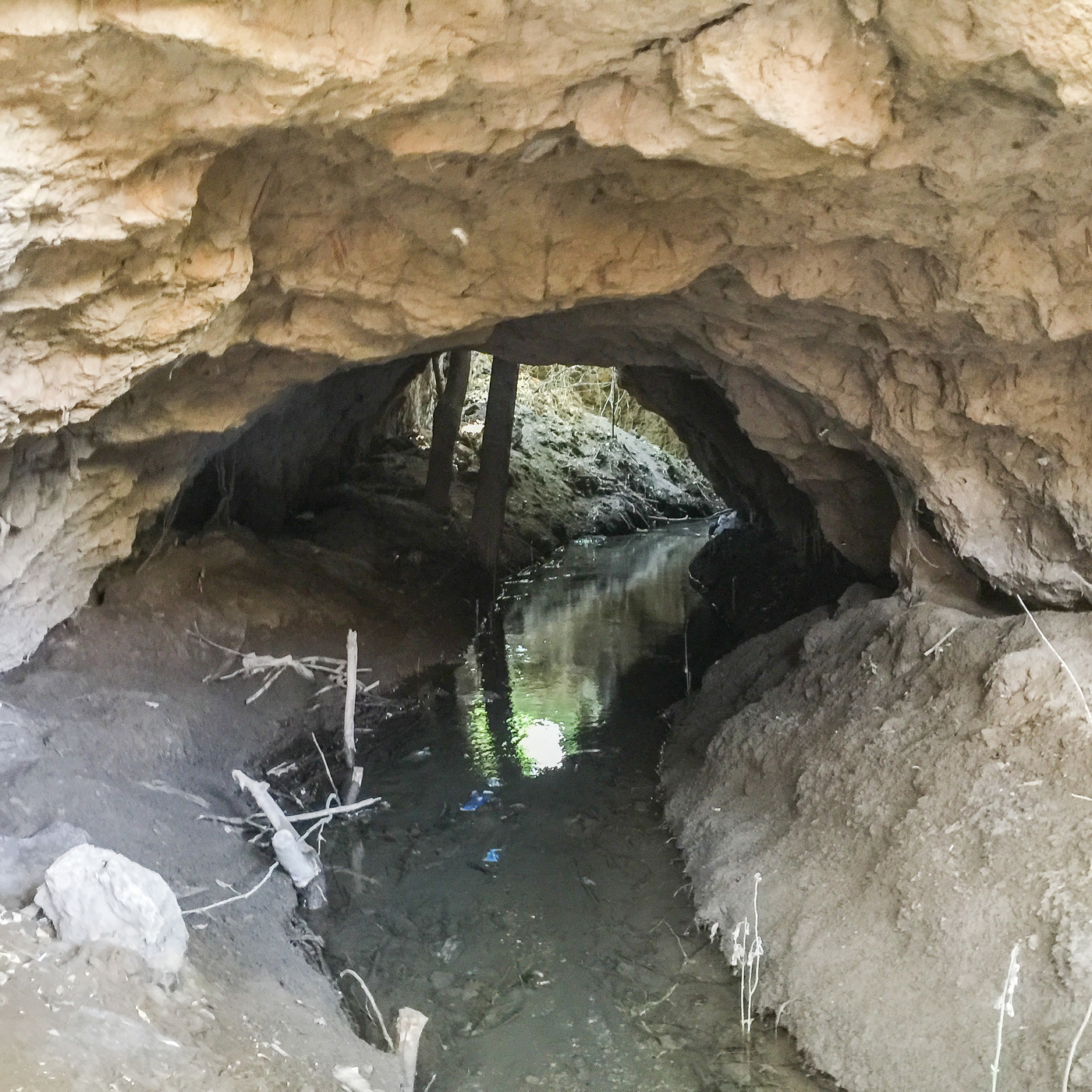 A karez in Turpan is part of a 1,000-mile network of ancient water tunnels.

"Thirty years ago, we had 182 'karez' in my town," he says in Uighur, the region's dominant language. "Now, only 64 of them have water. Each year, several of them run dry."

There used to be nearly 2,000 working karez throughout this region, but that number has shrunk to less than a couple hundred. Melting glaciers in the mountains above Turpan have meant more water flowing into the region, but that has also led to a boom in industrial farms and oil companies competing for water in the karez. The ancient irrigation system is quickly running dry.

Abdurehim shakes his head at the whole affair.

"Water means life. We can't live without it. I'm very worried we're going to run out of it in my lifetime."

At the rate global temperatures are rising, some 55 percent of all the glaciers in Xinjiang — nearly 11,000 — will be gone within 50 years.

"Even if global temperatures stop rising, this glacier will continue to melt," says scientist Li, atop the Tianshan No. 1 East glacier. "So, no, it's impossible to save it."

Li laughs, but it's a laugh that, in Chinese, is a sign of anxiety and defeat. As a glaciologist, Li says his job is changing as quickly as the glaciers themselves. Now, he says, he and other scientists are studying how to slow the melting — and how to prepare this region for a much drier and warmer future.