Accessibility links
Among China's New Leaders, The One Person Missing Is A Clear Successor To Xi Jinping : Parallels On Wednesday, China unveiled its new leadership lineup for the next five years. "Evidently part of the new era is to leave open the question of successors," says political scientist Brantly Womack. 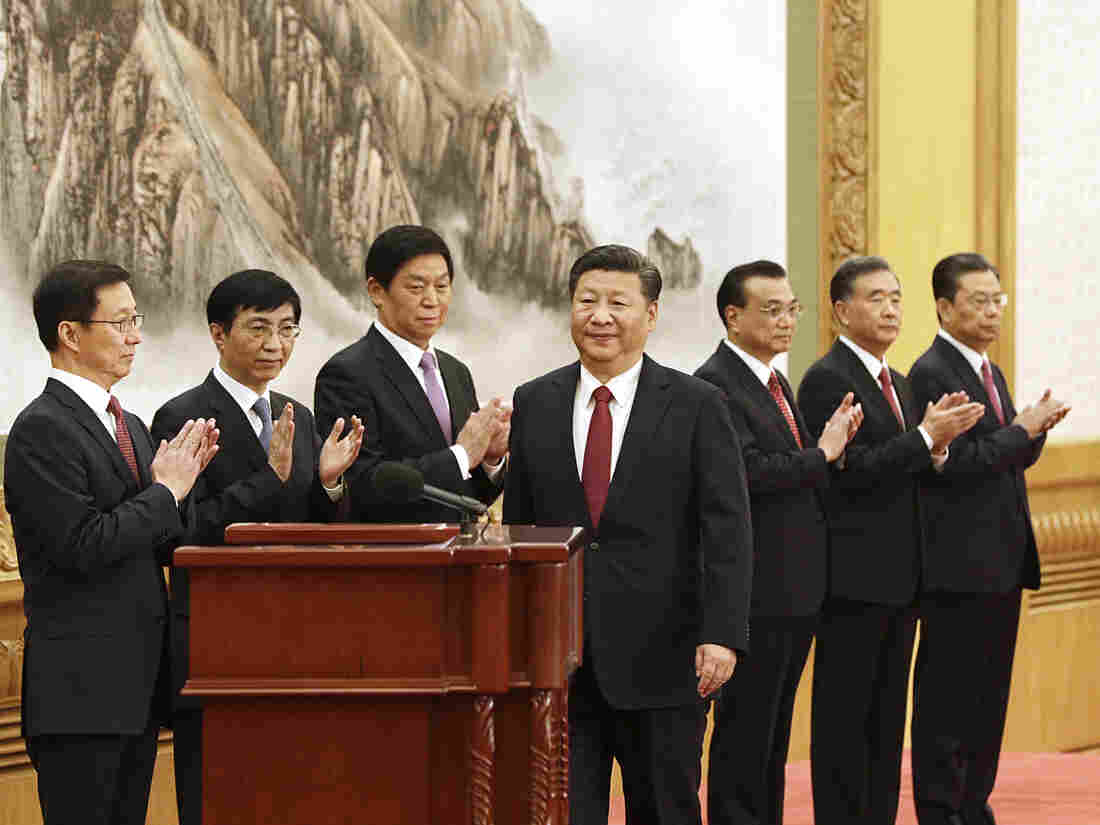 Xi Jinping (center) approaches the podium as other members of the Communist Party's new Politburo Standing Committee applaud on Wednesday. Xi unveiled a new leadership lineup that included no clear potential successors, raising questions about whether he might seek to stay in office beyond 2022. Bloomberg/Bloomberg via Getty Images hide caption 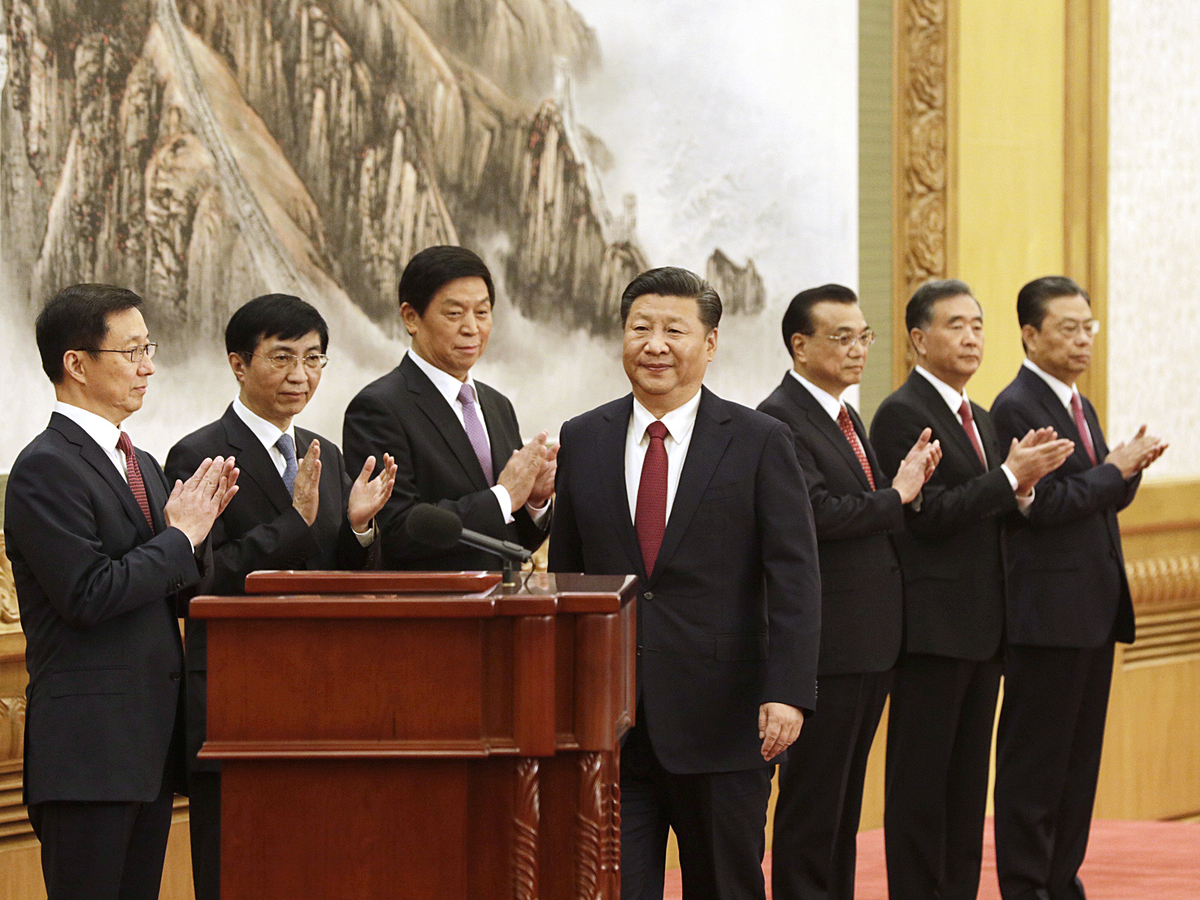 Xi Jinping (center) approaches the podium as other members of the Communist Party's new Politburo Standing Committee applaud on Wednesday. Xi unveiled a new leadership lineup that included no clear potential successors, raising questions about whether he might seek to stay in office beyond 2022.

Xi Jinping, China's most powerful leader in years, began a second five-year term Wednesday as leader of the ruling Communist Party. He appeared in public in a new leadership lineup — which notably lacked a clear successor, calling into question the stability of China's leadership transitions.

How Will China Select Its New Leaders At Its Communist Party Congress?

The unveiling of the country's seven most powerful men was the political climax of the year in China. It followed the 19th Communist Party Congress, which handed Xi his second term and enshrined his theories in the party charter.

The event was largely similar to previous ones. In Beijing's Great Hall of the People, Xi led a procession of six men in dark suits onto a red-carpeted stage before a packed crowd of journalists and officials, to whom he introduced the new leaders.

"With decades of hard work, socialism with Chinese characteristics has entered a new era," Xi proclaimed.

Xi described a Chinese renaissance in which the country would eradicate poverty and protect its environment and national interests. He said that China would continue a policy of economic reform and opening to the world, which has ushered in four decades of prosperity.

Last week, Xi asserted that China's place in the world has undergone a transformation.

"China's international influence, appeal, and ability to shape things has increased," Xi told the congress, "and we've made new and important contributions to world peace and development."

From the 1980s until recently, China avoided taking a leading role in international issues or offering itself as a model to be emulated.

But Xi's message was clear: "We have presented a new option for those countries and peoples who wish to accelerate development, while maintaining independence" from foreign domination, he told delegates. "We have contributed Chinese wisdom and a Chinese solution to the human race."

Xi also spoke proudly of the Communist Party's increased ability to govern, even saying that the party should be in charge of everything.

While the party is unlikely to resume micro-managing citizens' lives as it did during the era of Mao Zedong, "In the post-Mao era, this is probably the most active, forceful and organized the party has ever been," says Jude Blanchette, a China expert at the Conference Board, a New York-based research firm.

Blanchette points to party cells or committees that the party has inserted into private-sector firms, multinational corporations and civic groups.

"Where they didn't have a party cell, there's one now being activated," Blanchette observes. "And where there was a party cell that was atrophied, they're now seeing them become much more active."

This month's party congress was largely a symbolic stamp of approval for Xi and the party. While according to the party's charter, the congress is the highest organ of power, important decisions are in fact made in secret and handed to delegates to rubber stamp.

Blanchette says that for the world's second-largest economy "to have this little visibility into how it selects its leadership is striking."

Then again, he says, the congress has put Xi in a stronger position to pursue his own agenda.

"This is about maximizing power to drive policy," says Blanchette. "I think Xi Jinping is now a much stronger leader, just because of some of these more symbolic moves."

In the new leadership lineup, some men are his allies and others are not. All are expected to retire, based on an informal rule that members of the ruling body, the Politburo Standing Committee, over age 68 must retire at the next party congress.

Andrew Wedeman, director of China studies at Georgia State University, says Xi may want his allies in charge, but he's willing to work with other groups within the party.

"He's there for the long term," says Wedeman, "and my hunch is that he understands you achieve the long term by having an orderly succession."

But Xi apparently declined to designate a successor at the party congress. And that would appear to violate informal rules that new leaders are selected at the end of their predecessor's first five-year term.

"Xi Jinping has started his second term by announcing a new era in Chinese politics, and evidently part of the new era is to leave open the question of successors," says University of Virginia political scientist Brantly Womack.

"No one on the new Politburo is young enough to meet the age requirement for successor," Womack notes. "Does this mean that Xi plans to break precedent and take a third term himself?"

If he does, that would break another informal rule — one that limits China's leaders to a decade in power.

Such rules were put into place after 1989 to move China away from the era when rulers ruled for life. But Wedeman says these precedents may not have been established long enough — or clearly enough — to constrain officials' behavior.