Accessibility links
Instead of #MeToo, French Women Say 'Out Your Pig' : Parallels In the wake of the #MeToo hashtag following reports of Harvey Weinstein's sexual abuse, French women came up with a hashtag of their own. #BalanceTonPorc or "out your pig" shows no signs of abating. 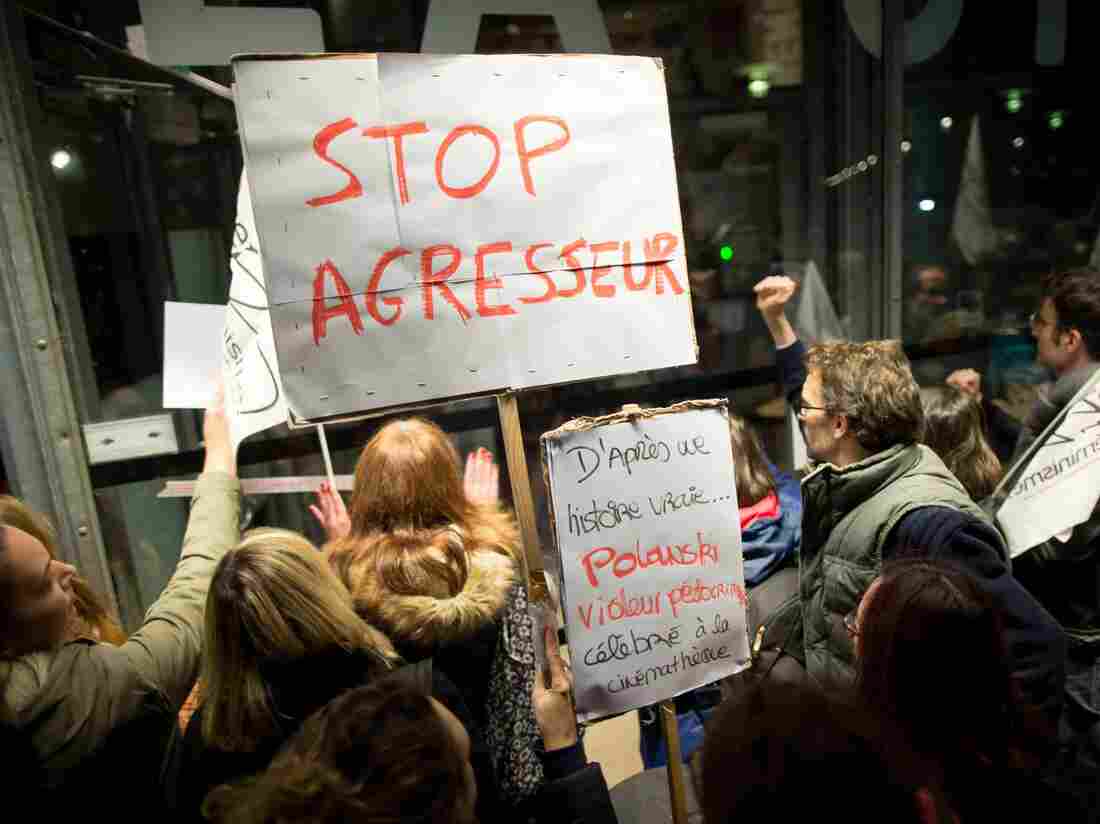 On Monday, French activists demonstrated against French-Polish director Roman Polanski, accused of a string of sexual assaults, prior to a screening in Paris. NurPhoto/NurPhoto via Getty Images hide caption 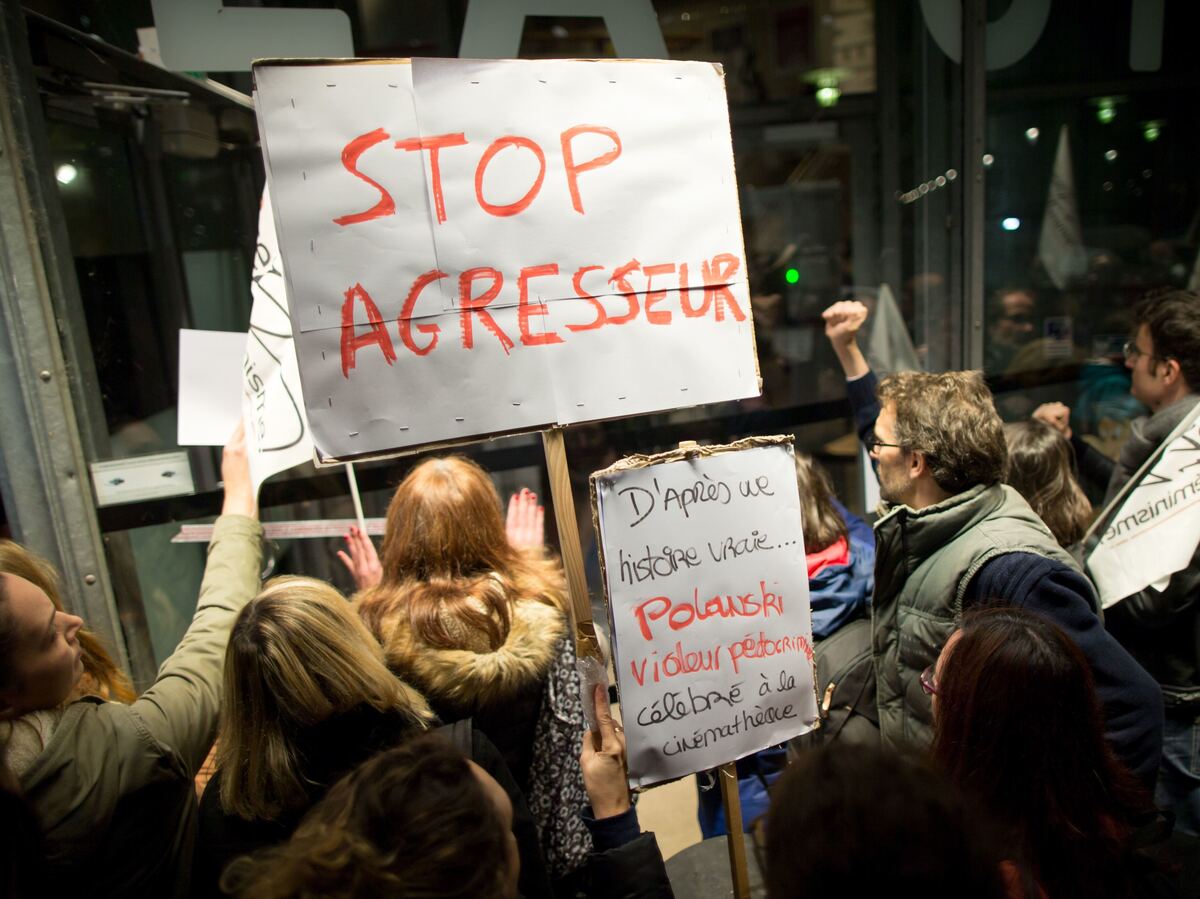 On Monday, French activists demonstrated against French-Polish director Roman Polanski, accused of a string of sexual assaults, prior to a screening in Paris.

When reports of Harvey Weinstein's sexual abuse surfaced last month, the effects were felt well beyond the U.S. Three French actresses joined the accusations against Weinstein, and since then, momentum in France has spread beyond the world of cinema.

Stories of abuse and harassment are pouring out from nearly every sector — medical, law enforcement, finance, media. The newspaper Liberation called out "les bourreaux du travail" or "workplace torturers."

In the wake of the #MeToo hashtag that followed news of Harvey Weinstein's sexual abuse, French women came up with a hashtag of their own — one that points at aggressors, not victims. #BalanceTonPorc or "out your pig" has exploded and shows no signs of abating.

Henda Ayari, a 39-year-old French Muslim author, says she was emboldened by all the French women outing and denouncing their sexual aggressors.

"I thought, these women are no different from me," said Ayari in an interview with Le Parisian. "I also have to denounce what he did to me."

So this week, five years after the alleged incident, she did just that.

Her alleged aggressor is Tariq Ramadan, a top scholar of Islam. The 55-year-old theologian's bona fides include being professor of contemporary Islamic studies at Oxford University.

Ayari says Ramadan assaulted and raped her when she turned up for a meeting with him in a hotel suite in Paris in 2012. She says he slapped her in the face when she resisted.

"He told me I came for that, and I deserved what I got. That I didn't wear the veil, so I was a prostitute," she told Le Parisian.

Ayari says it never entered her mind that she was in any danger when she went to his room. "I considered him like a father figure," she said.

Another French woman has also brought charges of rape against Ramadan. Ramadan has denied both women's accusations.

"Women are speaking out for the simple reason that other women are speaking out, and it allows a whole new field of free speech to open up that didn't exist before," says journalist and author Dominique Simonnet, who has written a book about women and the sexual revolution.

An editorial in Le Monde referred to the Weinstein "tsunami."

Le Monde remarked that by using #BalanceTonPorc, a hashtag more "radical" than #MeToo, French women were expressing their anger over a problem that may not be more vast than elsewhere, but is surely more entrenched.

"The testimony coming out is so detailed and so numerous that it points to a suffocating silence around harassment that is in complete contradiction with the legislation there to protect women," the editorial said.

"In France," he says, "there is something of a tradition of seduction and gallantry, so we think the problems between men and women are not as fraught here, and there is more freedom."

But Simonnet says what's happening now shows that France is dealing with the age-old problem of men dominating women through violence just like everywhere else.

A recent poll shows that some 50 percent of French women have suffered from some kind of harassment. France already had somewhat of an awakening in 2011 with revelations about Dominique Strauss Kahn, then the head of the International Monetary Fund and the unofficial front-runner in France's 2012 presidential race.

Though the case was eventually dropped, Strauss Kahn's arrest in New York on allegations of attacking a hotel housekeeper laid bare a decades-long pattern of predatory behavior that was ignored and overlooked by officials and the French media.

"France has had a culture of silence," says Laetitia Cesar-Franquet, a sociologist with the Regional Institute of Social Work, an organization that helps train professionals who work to ensure fair treatment in the workplace.

But Cesar-Franquet says the Weinstein affair is really shaking things up.

"Everything is changing," she says. "The fact that women are daring to talk is one huge change. The second change is that now things are shifting on the ground. For example, company unions are putting in place programs to sensitize people to this. Men are starting to really ask themselves, what is harassment? They are putting themselves in the equation as well."

This week, the Cinemateque Française, a historic archive and symbol of French cinema, went ahead with its plans to honor Polish filmmaker Roman Polanski in a retrospective, despite protests from feminist groups.

Polanski fled the U.S. in the 1970s, after being charged with sexually abusing a minor. Several other women have since also come forward, saying he also molested them as young teens.

22-year-old Clementine Pierlot was among the dozens of women yelling "Aggressor!" as Polanski entered the theater complex in the east of Paris on Monday.

"Now is just the worst time to honor him," she said. "Since Weinstein, we are not going to tolerate this violence anymore. Women now want these men to be accountable for their actions."