Accessibility links
Shaky U.S.-China Trade Relationship Will Top Trump's Agenda In Beijing : Parallels Many U.S. businesses say they're treated unfairly in China. And there are concerns about Chinese acquisitions of U.S. companies. 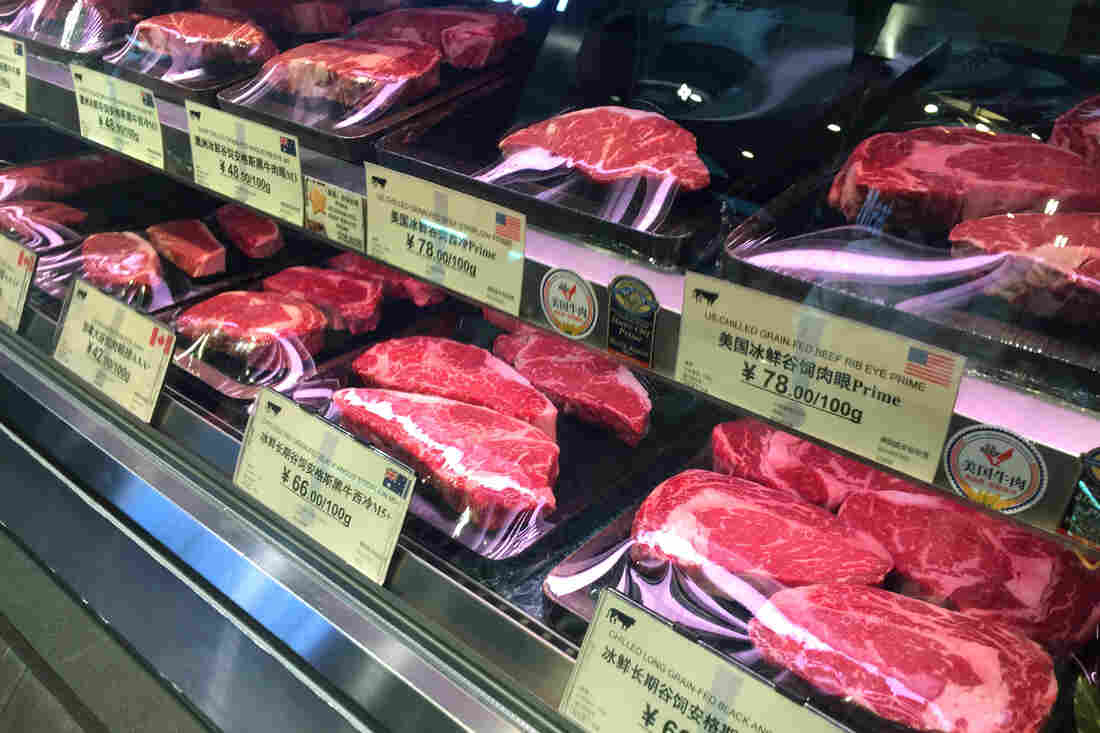 U.S. steak is sold among cuts of beef from Australia and New Zealand. Because the U.S. lacks a free trade agreement with China, its beef is expensive in China. As a result, it doesn't sell as well as beef from competing markets. Rob Schmitz/NPR hide caption 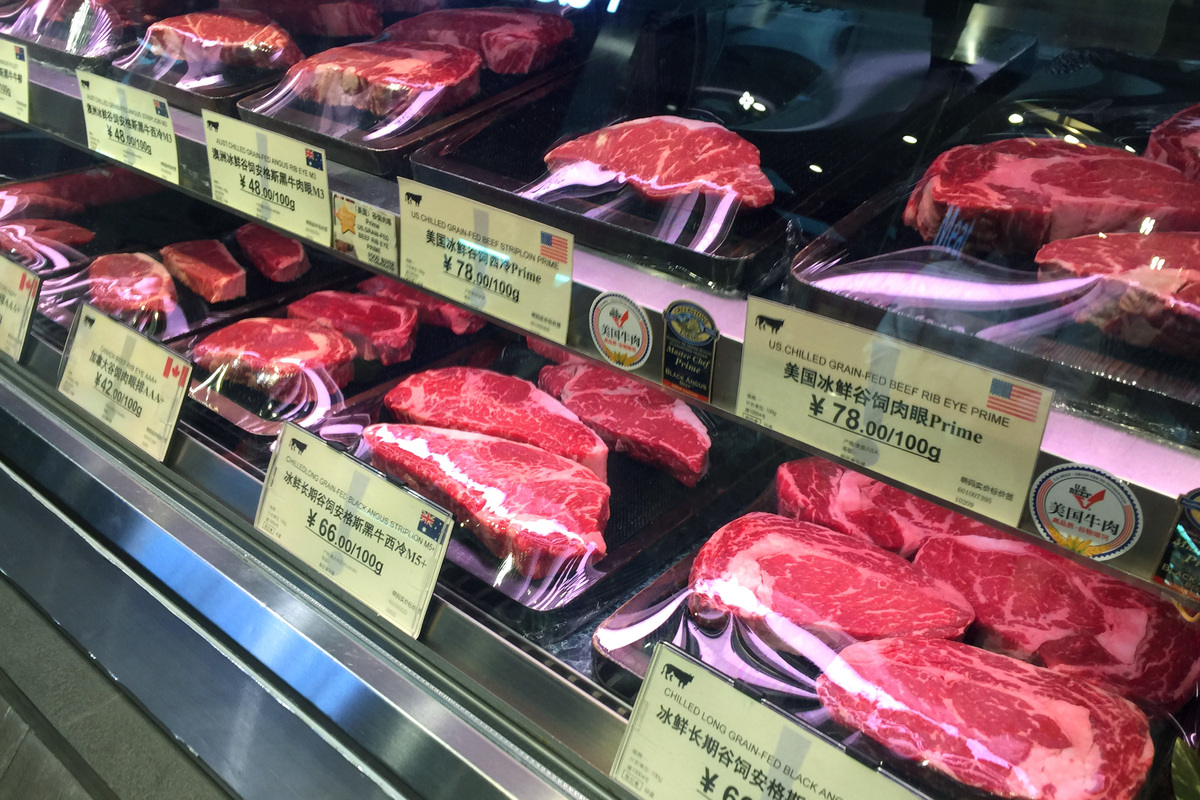 U.S. steak is sold among cuts of beef from Australia and New Zealand. Because the U.S. lacks a free trade agreement with China, its beef is expensive in China. As a result, it doesn't sell as well as beef from competing markets.

Soft lounge music pipes through the speakers as elegantly dressed shoppers peruse organic produce and meats at City'super, one of Shanghai's most upscale markets, a cross between Whole Foods and Louis Vuitton. But one look at the price of an American steak is enough to conjure a mental scratch of a needle across this soothing soundtrack: Nearly $60 for a pound of USDA Prime ribeye.

"That's around 30 percent more expensive than the best steak from Australia," says Wang Yansong, manager of the meat purchasing department of City'super. "We hope the price will come down so that we can sell more of it. We now sell a ton of it each month."

That may seem like a lot, but Wang sells nine tons of Australian steak per month. So why is U.S. beef so expensive in China?

"There is still limited supply," says Jason Hafemeister, trade counsel to the U.S. agriculture secretary. "It's trickling into China as we're ramping up, so supply and demand, valued product, people are able to charge more and find customers who will pay for it."

Hafemeister says U.S. beef is a hot commodity in China. But there are other reasons for its stratospheric price — reasons that get at the heart of the shaky trade relationship between the U.S. and China. 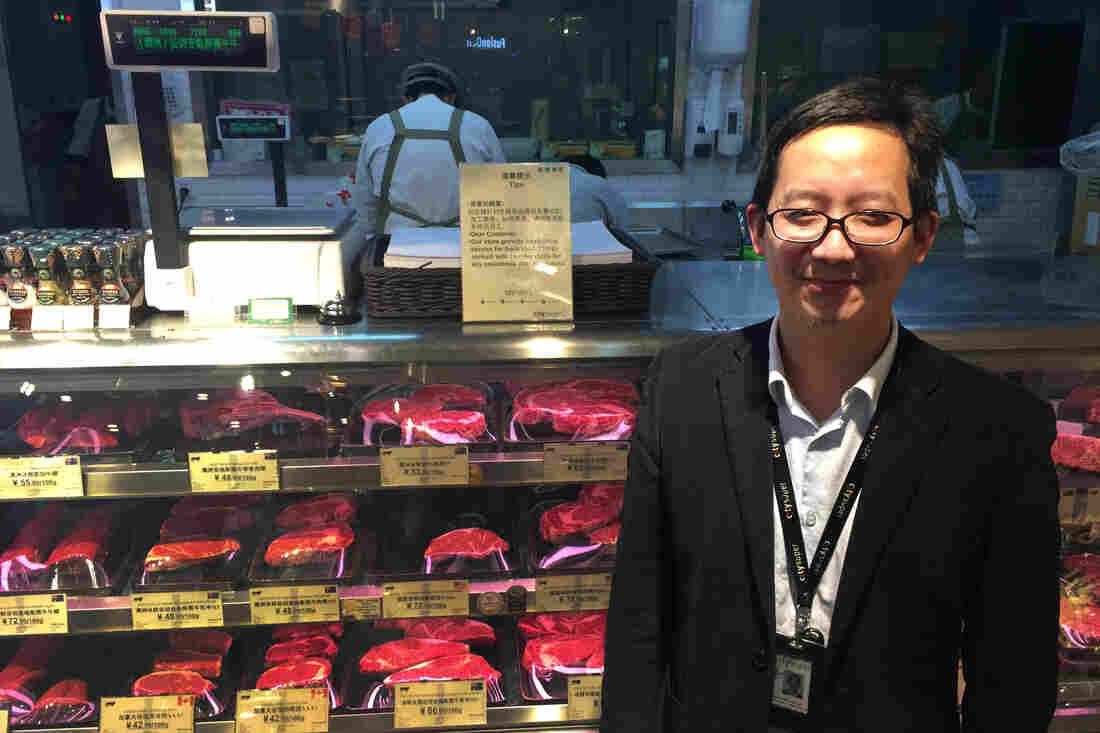 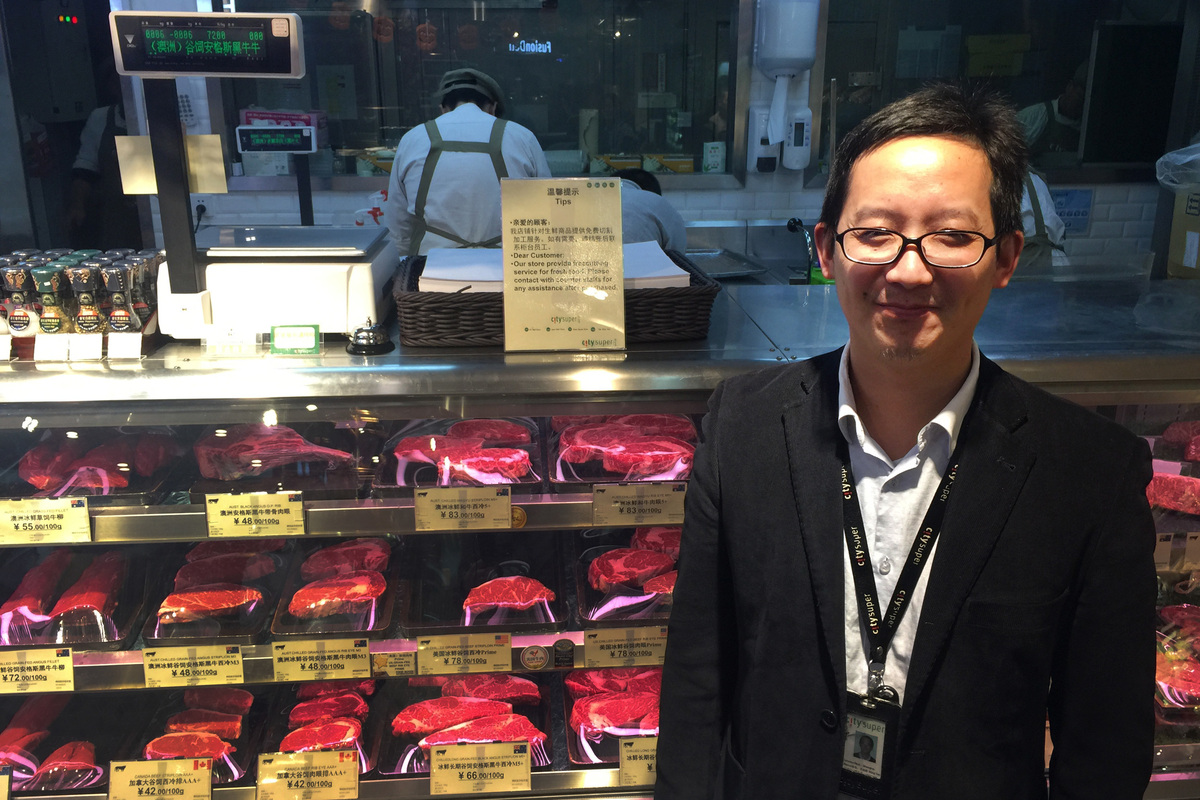 Wang Yansong, meat purchasing manager for City'super in Shanghai, stands in front of steak imported from the United States, Australia and New Zealand. U.S. beef is at least 30 percent more expensive than its international counterparts.

China imposes a 12 percent tariff on beef from the U.S., yet its biggest competitors in the beef market in China – Australia and New Zealand – have both signed free trade agreements with Beijing, pushing down their tariffs to around 4 percent. Australia sold more than half-a-billion dollars' worth of beef to China last year; Hafemeister hopes the U.S. can sell just $20 million worth by the end of this year.

James McGregor, president of the greater China region for the consulting firm APCO, says China's lifting of the U.S. beef ban in May is the latest case of too little, too late. And he's not optimistic the Trump administration is focused enough to improve business for U.S. companies in China.

"There is no strategy and professionals are not involved," he says. "The people from [the U.S. Trade Representative's office] and Commerce and State are sidelined."

McGregor says instead of representatives from the U.S. Trade Representative and other government staff who typically deal with China, President Trump has political appointees with little to no trade experience engaging with the Chinese.

"It's really been a farce," says McGregor. "And if it continues like this, it's really going to hurt American business. The Chinese are pros. They know what they're doing. Anybody sitting on the other side of the table as Chinese negotiator has been doing that subject for 20 years."

McGregor says Chinese negotiators have called friends of his in Beijing to see what the Chinese side could give to Trump during his Beijing visit to please his base. He calls these "Twitterable deliverables," and he puts the lifting of the Chinese ban on U.S. beef in this category: an easily promotable gift that, because it has come so late, may not have a meaningful impact on the U.S. economy.

What would have an impact, says William Zarit, chairman of the board at the American Chamber of Commerce in China, is forcing China to open its markets to U.S. business and to stop giving preferential treatment to Beijing's own so-called "global champion" companies. Tech giants Baidu, Alibaba and Tencent, as well as telecommunications company Huawei, have all received generous support from Beijing.

"These global champions are being nurtured in the domestic market with protection and with strong state support, so that in some ways, when these companies go international, it's tantamount to a Western company competing with the country," says Zarit.

In fact, the Organization for Economic Cooperation and Development or OECD, the organization of developed countries, consistently ranks China among the most restrictive markets in the world, while the U.S. is consistently among the least.

Each year, the American Chamber of Commerce in China surveys executives of hundreds of U.S. companies doing business in China with simple, straightforward questions such as "Do you feel welcome in China?"

More than 80 percent of those who responded this year "felt less welcome in China that they did in the past," says Zarit. "I think this is quite compelling."

This year's survey also found 40 percent of respondents saying their companies were slowing investment in China as a result of unfair treatment by the Chinese. This, says Zarit, is what Trump should focus on in his meetings with the Chinese this week.

APCO's McGregor says Trump should also focus on how Chinese companies – many backed by state funding — are acquiring U.S. companies at an alarming rate.

Earlier this year, an internal Pentagon report warned of a surge of Chinese investment in Silicon Valley startups, especially in technology with military applications.

According to The New York Times, the Pentagon report, commissioned by former Secretary of Defense Ash Carter, said: "The U.S. government does not have a holistic view how fast this technology transfer is occurring, the level of Chinese investment in U.S. technology, or what technologies we should be protecting."

"The Chinese are smart," says McGregor. "They're investing in everything in Silicon Valley right now. And in some cases, when the Chinese invest in something that prevents [the] U.S. government from investing, they're blocking technologies from our military."

McGregor says a Pentagon technology specialist told him the report has been removed from the Internet at the request of the U.S. Joint Chiefs of Staff.

"We pride ourselves on our openness and our rule of law," says McGregor. "But this is a weakness, when you have this machine coming at you."