Accessibility links
Saudi's Young Crown Prince Takes The Kingdom On A Wild Ride : Parallels Crown Prince Mohammad bin Salman is revolutionizing the way the kingdom does business at home. He's also shaking up the entire region as he confronts Iran on multiple fronts. 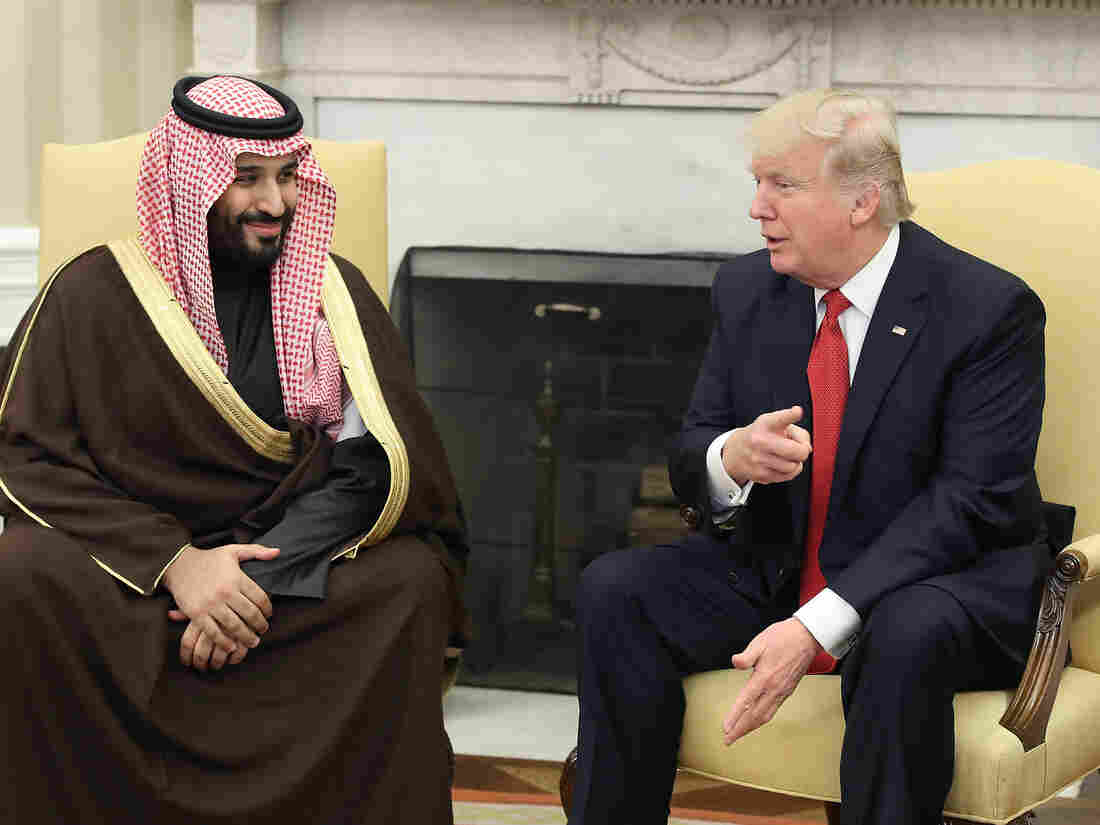 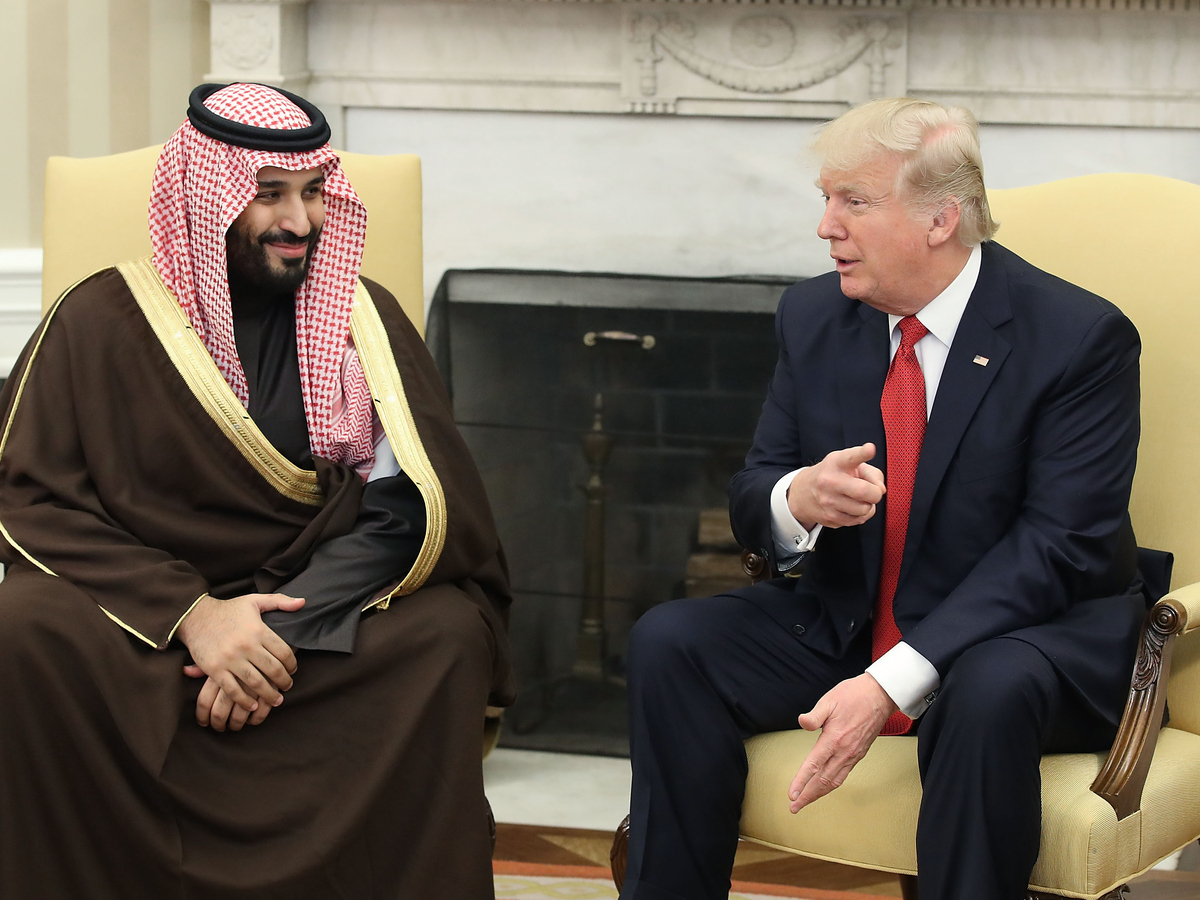 Mohammed bin Salman, now Saudi Arabia's crown prince, meets with President Trump in the Oval Office on March 14. Crown Prince Mohammed is seen as the driving force behind the kingdom's aggressive campaign to counter Iran throughout the Middle East.

With the blessing of his father, 81-year-old King Salman bin Abdul-Aziz Al Saud Salman, the crown prince has shaken up the place domestically: Women will soon be allowed to drive; powers of the religious police have been curtailed; and over the weekend, some of the richest and most prominent figures in the kingdom were arrested in an anti-corruption campaign.

The crown prince "is extremely decisive. He's very organized. He takes notes. He responds to requests in 24 to 48 hours. There's no, 'Let's wait and discuss and reach a consensus and we'll get back to you in two weeks.' The old ways of doing business in Saudi Arabia have changed dramatically," said Marcelle Wahba, a former U.S. ambassador to the United Arab Emirates and now head of the Arab Gulf States Institute in Washington.

The crown prince is moving just as aggressively with a foreign policy that's confronting arch-rival Iran on multiple fronts and raising tensions across the region.

All the fighting involves Iran, either directly or indirectly.

Saudi and Iran broke off diplomatic relations in January 2016 after the Saudis executed a Shiite cleric and Iranians responded by attacking the Saudi Embassy in Iran.

The tensions are on display this week, particularly in Yemen, where the Saudi crown prince unleashed a military campaign in 2015 against Houthi fighters, who are supported by Iran.

Saudi Arabia blamed Iran for providing the Houthis a missile that was fired over the weekend from Yemen toward the main airport in the Saudi capital Riyadh.

"We see this as an act of war," Saudi Arabia's Foreign Minister Adel Jubair told CNN. "Iran cannot lob missiles at Saudi cities and towns and expect us not to take steps."

Those steps included closing Yemen's land, sea and air links with the kingdom, which could make it even more difficult for aid groups to operate in one of the world's worst humanitarian crises.

Iran's Foreign Minister Mohammad Javad Zarif shot back with this tweet, referring to the Kingdom of Saudi Arabia as KSA:

KSA is engaged in wars of aggression, regional bullying, destabilizing behavior & risky provocations. It blames Iran for the consequences.4/

The Saudi incursion in Yemen was supposed to be quick, restore some semblance of order on Saudi's southern border and deal a setback to Iran. Instead, the fighting has been largely a stalemate and monitoring groups have accused the Saudis of inflicting many civilian casualties and contributing to Yemen's misery.

"Clearly this is a drain on the reputation of Mohammad bin Salman," said Wahba. "I think the Saudis also realize this has become a huge humanitarian issue and a huge public relations problem for them, especially in the West."

Alterman questions whether the Saudis have overestimated their military might.

Previous U.S. administrations have urged the Saudis to play a larger political and security role in the region, and that's what the Saudis are now doing.

President Trump has been strongly supportive. He was warmly received in May, when he made Saudi Arabia his first foreign stop as president. Trump also expressed support for the anti-corruption campaign.

....Some of those they are harshly treating have been “milking” their country for years!

Trump's son-in-law and advisor, Jared Kushner, recently made his third trip to the kingdom this year and reportedly stayed up late at night talking strategy with Crown Prince Mohammad at a desert ranch.

But Saudi regional efforts have not produced any great successes so far.

The Saudis were widely seen as pressuring Lebanon's prime minister, Saad Hariri, to resign over the weekend. The Saudis have long supported Hariri, a fellow Sunni Muslim, and the Hariri family made its fortune from a construction business in the kingdom.

The Saudis apparently felt Hariri was being undermined by Hezbollah, a Shiite group closely aligned with Iran. Yet many analysts are scratching their heads, wondering how Hariri's resignation will ultimately work to Saudi Arabia's advantage.

"One of the questions I have about all these Saudi actions is what is the end game and what is your strategy for getting to it," said Alterman, citing Lebanon as one of several examples. "It still may all work out. But the fact is, none of it has worked out yet and the Saudis seem to have doubled down on a strategy of embracing more risk."

Another example is Qatar, one of six Gulf monarchies that have traditionally worked together. But over the summer, the Saudis led an effort to boycott and ostracize Qatar, a tiny peninsula that juts out in the Gulf from the eastern coast of Saudi Arabia.

The Saudis say Qatar supports radicals and is too cozy with Iran. As one of the richest countries in the world, Qatar has been able to withstand the isolation without any great harm so far, though it's unclear how the standoff will be resolved.

"Any person looking at this should have some concerns that [Mohammad bin Salman] may be biting off too much," Wahba said. "These are very dramatic changes, and to take them all at once, I'm sure he's created a lot of people who are not happy with this. Whether he will succeed or fail in the long term is still a question mark."