Accessibility links
Trump In Asia: A 'Rebalance' Toward Trade : Parallels The Trump administration's engagement with Asia has matched the Obama administration's. What's changed are the priorities: elevating commercial issues to equal or higher priority than security issues. 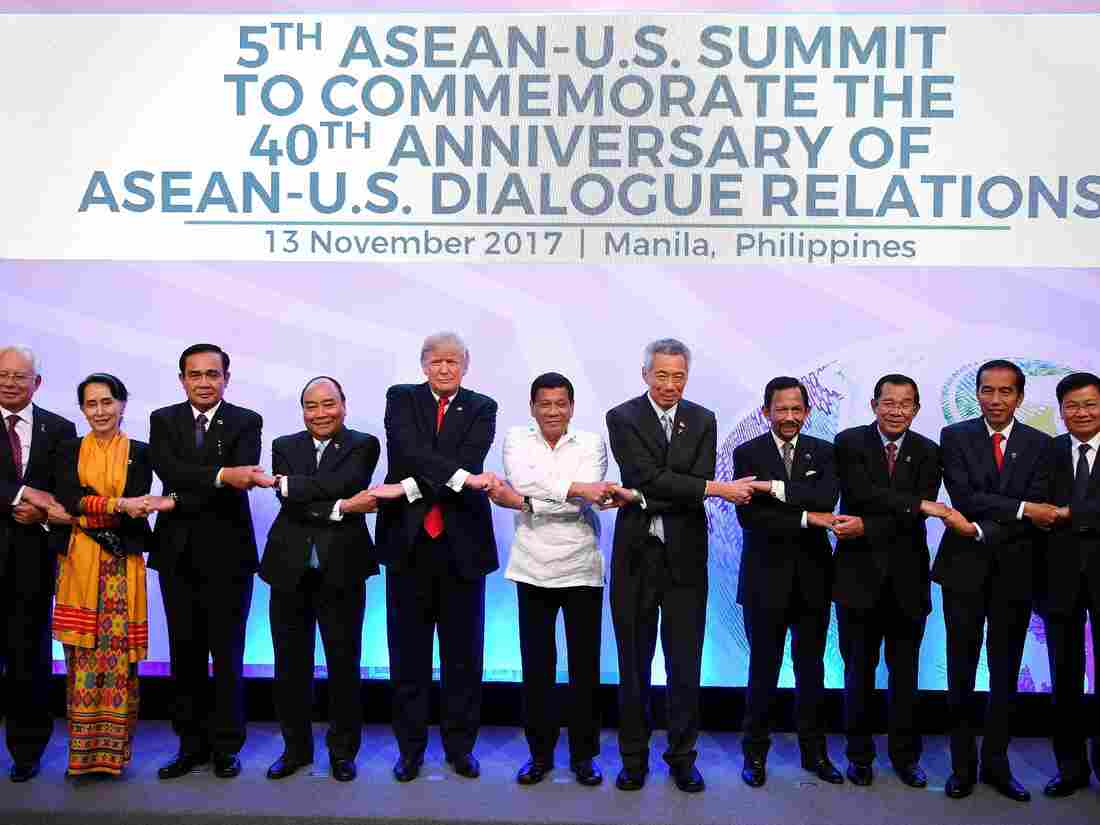 Asian leaders and President Trump pose for a photo during the Association of Southeast Asian Nations Summit in Manila on Monday. Manan Vatsyayana/AFP/Getty Images hide caption 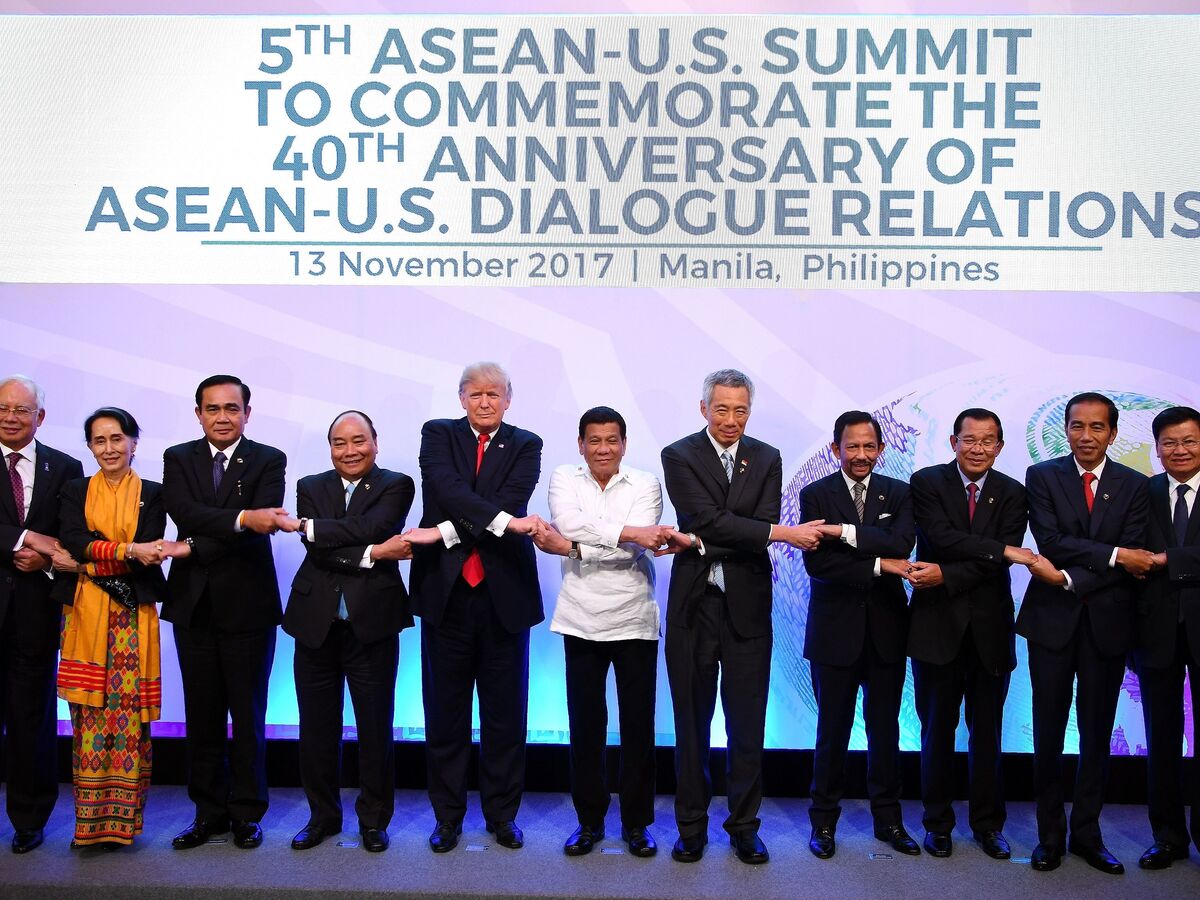 Asian leaders and President Trump pose for a photo during the Association of Southeast Asian Nations Summit in Manila on Monday.

As President Trump nears the end of his five-country and multiple-summits Asia trip — the most expansive visit to Asia in 25 years by a sitting U.S. president — one might well ask, as Monty Python does in The Meaning of Life, "What's it all about?"

The trip has provided a bewildering message of impulses, priorities, pronouncements and tweets, but one theme stands out: The Trump administration intends to push for fair and reciprocal trade and economic practices from allies and nonallies alike.

It is the only major consistency among the president's campaign rhetoric, policy pronouncements and administration actions to date. Even his lavish praise for the progress of regional countries seems designed to reinforce the message that Asia has done well partly because of what he himself has acknowledged as good practices — promotion of private property, rule of law, hard work and individual enterprise — but perhaps even more so because of many Asian countries' lack of fairness and reciprocity in trade, government intervention, product dumping, subsidized goods, currency manipulation and predatory industrial policies.

It is worth noting that the Trump administration's engagement with Asia at the presidential and Cabinet levels has matched that of its immediate predecessor, the Obama administration, and provides continuity to America's long "rebalance" or "pivot" to the region.

What has changed are the priorities of engagement: elevating commercial issues to the same or higher priority than security issues with allies and partners. If there is a Trump administration legacy on the Asia-Pacific, it might well be a rebalance to the commercial in U.S.-Asia relations.

In Danang, Vietnam, where President Trump delivered his main policy address on the "free and open Indo-Pacific" at the Asia Pacific Economic Cooperation CEO summit, the administration threw down a regionwide economic gauntlet in a city where a U.S. military base once prosecuted the U.S.'s most divisive war.

If bilateral trade and investment agreements with the region's countries are pursued as vigorously as promised, U.S.-Asia relations are likely to be unusually contentious — even as defense ties are sustained. While every administration calibrates between security and commercial relations, the Trump administration is emphasizing commerce over defense.

That's a significant change. And it is no political bluff or negotiations posture. On no other subject has the president been more detailed or passionate. About 1,300 of 3,500 words of the Danang speech were devoted to U.S.-Asia economic relations.

Trump declared that "from now on, [we] expect that our partners will faithfully follow the rules just like we do ... markets will be open to an equal degree on both sides, and that private industry, not government planners, will direct investment."

Only "fair" and reciprocal bilateral trade agreements will be acceptable, he said. He rejected "large" agreements that "tie our hands, surrender or sovereignty, and make enforcement practically impossible" — presumably referring to the Trans-Pacific Partnership, from which the U.S. has withdrawn and which the remaining 11 countries agreed at the same summit to pursue.

The president warned that intellectual property theft, forcing businesses to surrender their technology to the state and forcing joint ventures in exchange for market access would no longer be tolerated. This broadside mostly — but not only — implicates China. He also promised to address "massive subsidizing of industries through colossal state-owned enterprises ... cyberattacks, corporate espionage, or other anti-competitive practices."

If there was a sop to the region, it was Trump's promise to request the World Bank and Asian Development Bank to focus on high-quality infrastructure investment that promotes economic growth. This might be interpreted as a response to Beijing's ambitious Belt and Road infrastructure initiative, but it is unlikely to be sufficient to worry Beijing — or placate anxious Asian partners.

As allies and partners digest the president's remarks, they might also consider what he did not say.

Not once did Trump use the phrase "American leadership" in a major speech or statement. This phrase, a staple of his predecessors, is a bedrock of American rhetoric to reassure regional allies and friends and deter and dissuade potential foes. The president instead offered the region a tepid "renewed partnership." This is curious because during its first year in office, the administration has robustly engaged regional leaders.

Also largely missing was a focus on America's alliances. Instead, echoing his remarks in September at the United Nations, he called for "strong, sovereign, and independent nations" or a "beautiful constellation of nations — each different, each unique, and each shining brightly and proudly throughout this region ... "

President Trump did not link his call for a "free and open Indo-Pacific" with a call for cooperation among alliances and democratic friends. Such a vision marginalizes the shared values and interests of long-held alliances, as well as an ongoing effort to network American allies and friends together — such as the quadrilateral meeting among the U.S., Japan, Australia and India on APEC's sidelines.

Despite this muted presidential message about alliances, the U.S. is in fact continuing to consolidate defense relations with Japan, Korea and Australia, has assisted the Philippines in defeating ISIS militants and hosted a controversial visit of Thailand's unelected military leader.

The president took up the North Korea issue everywhere he went — but his address in Vietnam made no pitch to a regionwide audience to enforce sanctions or end trade and diplomatic recognition of Pyongyang.

Also notable is his anodyne approach to the South China Sea, where China and several countries in the region, including Vietnam, have been locked in a bitter dispute over the status of islands. Trump simply said he favored "freedom of navigation and overflight including open shipping lanes." He later offered to "help mediate or arbitrate" — an offer Vietnam's President Tran Dai Quang deflected during a press briefing.

Though not surprising, the president made only passing reference to the rule of law and individual rights in Danang. And talk of rules, norms and institutions was connected exclusively to fair and reciprocal trade — not politics.

Although the administration's joint statements with Southeast Asian leaders have included references to democracy and human rights, on this trip, the president did not highlight human rights issues publicly with Vietnam's leaders and apparently did not make a priority of it with Philippine President Rodrigo Duterte, whose violent war on drugs has raised worldwide concerns.

It is clear that trade, investment and economic relations with the Indo-Pacific region remain the president's core interest. His insistence on "America first" likely means hard-fought negotiations lie ahead with allies such as South Korea on the Korea-U.S. free trade agreement, and with Japan and the other countries that run significant goods trade deficits with the U.S. including, most especially, China, but also India, Indonesia, Malaysia, Taiwan, Thailand and Vietnam.

A central challenge will be how to maintain robust cooperation with allies and partners on regionwide challenges ranging from China's maritime assertiveness to contesting visions of regional economic integration to piracy and terrorism, while in parallel pursuing tough negotiations on commercial relations. President Trump's big Asia trip may herald a rocky road ahead for the "free and open Indo-Pacific" he envisions.

Satu Limaye (@SatuLimaye) is the director of the East-West Center in Washington, D.C., and of Asia Matters for America. The views expressed are personal.