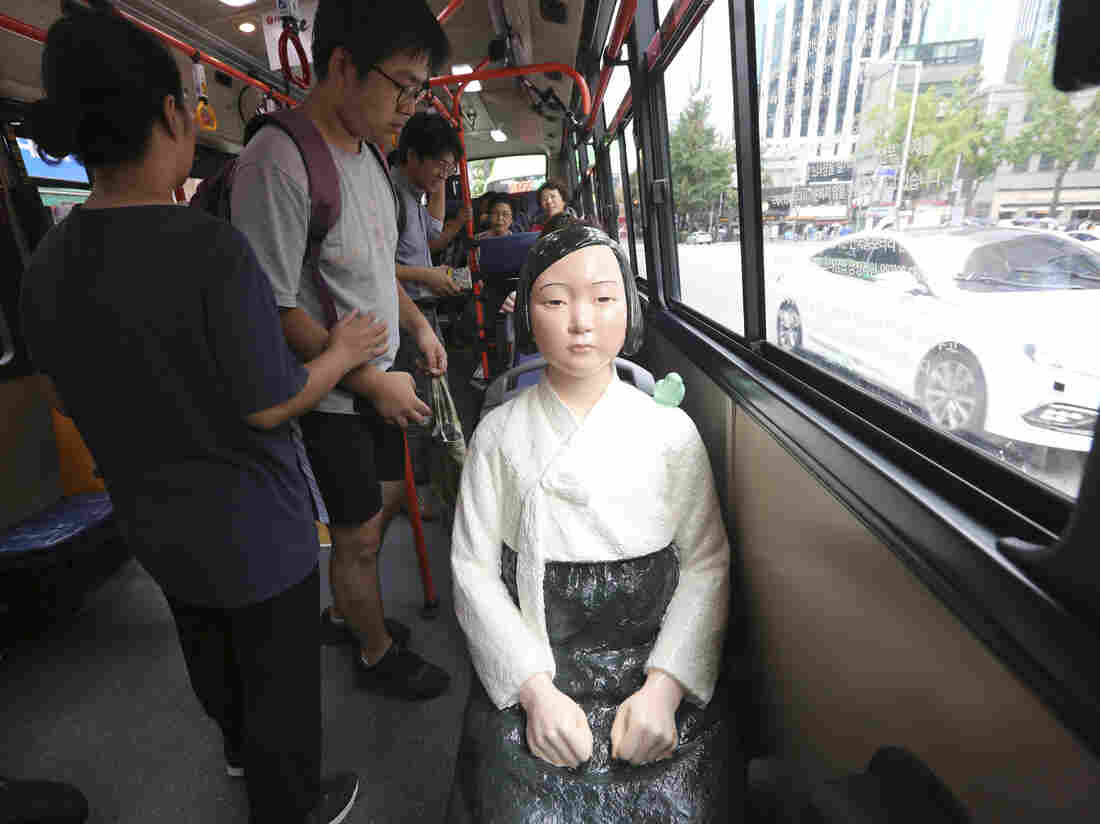 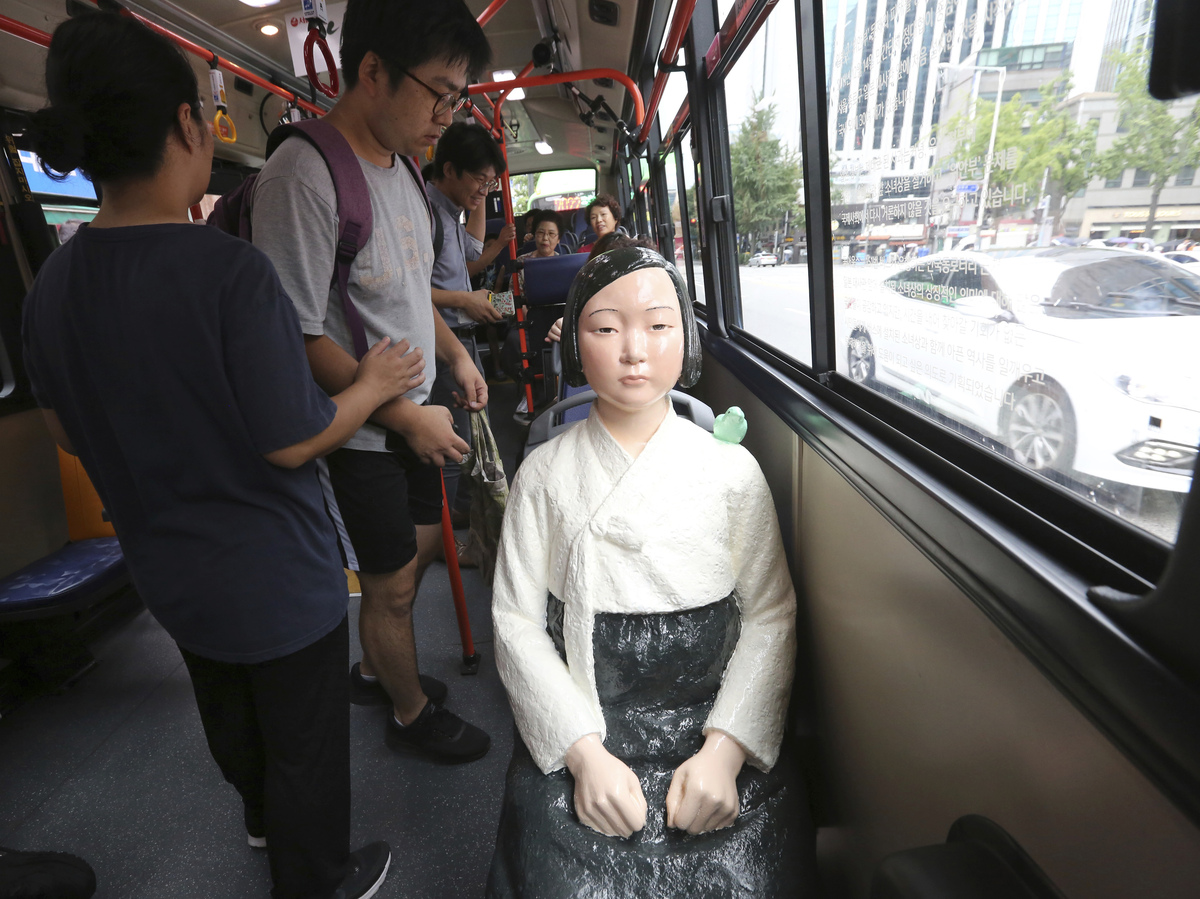 A "comfort woman" statue is placed on a bus seat to mark the 5th International Memorial Day for Comfort Women in Seoul in August.

One goal of President Trump's trip to Asia has been to rally America's allies to help put pressure on North Korea. But the mission is complicated by the fact that America's two staunchest allies in East Asia — Japan and South Korea — don't get along well when it comes to issues involving their history.

Much of the friction dates to Japan's occupation of Korea in the first part of the 20th century. Tensions related to that occupation still simmer — even 70 years after South Korea was liberated.

Things flared up again this year over a statue of a young girl known as the "Peace Statue."

The small bronze figure depicts a girl sitting in a chair, staring straight ahead with a look of determination. She has cropped hair and wears a hanbok — a traditional Korean dress. She's barefoot. Her fist is clenched. Next to her is an empty chair.

The girl memorializes women like Ahn Jeom-sun. She's now 89 and says she has visited the statue often. It symbolizes the youth she lost at age 13, when the Japanese Imperial Army abducted her from her village.

"What I remember is that I was forcibly taken out of Korea and taken to China," Ahn says.

The United Nations estimates 200,000 girls and women — mostly Koreans — were seized from villages to join Japan's military sexual slavery program before and during the Second World War.

She and the others came to be known as "comfort women." They served at temporary brothels near the front lines — often tents or wooden shacks surrounded by barbed wire — and were forced to have sex with as many as 70 men per day. 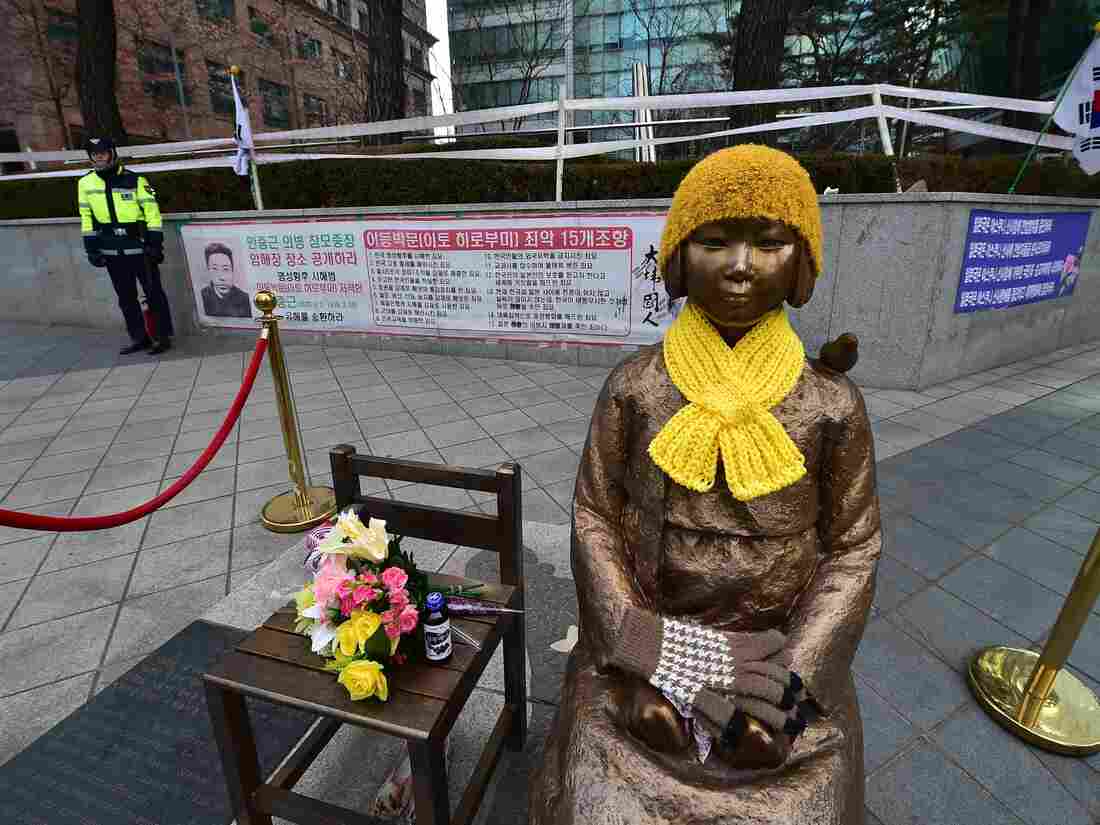 A statue of a teenage girl — the original monument to former "comfort women" who served as sex slaves for Japanese soldiers during World War II — sits in front of the Japanese Embassy in Seoul. Jung Yeon-Je/AFP/Getty Images hide caption 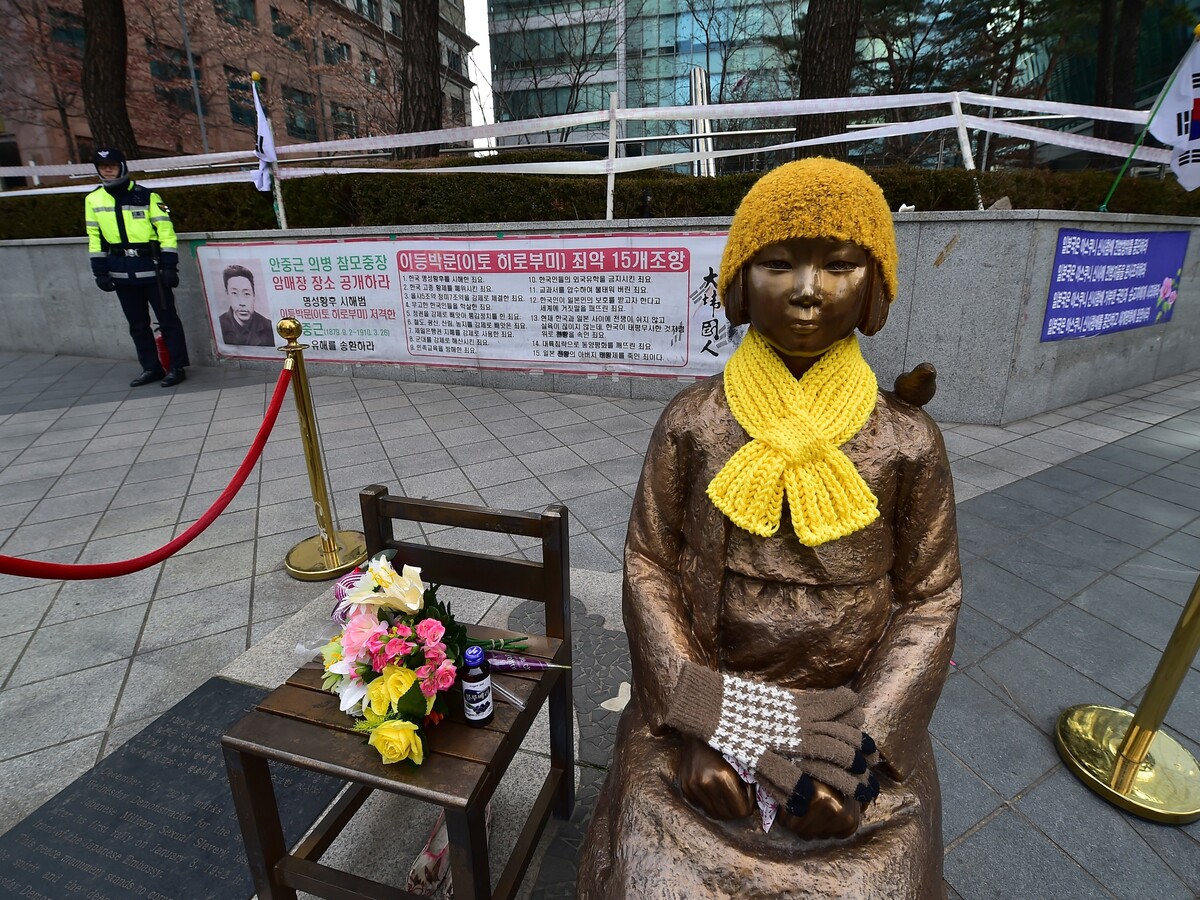 A statue of a teenage girl — the original monument to former "comfort women" who served as sex slaves for Japanese soldiers during World War II — sits in front of the Japanese Embassy in Seoul.

"If we didn't obey to what they wanted us to do, they would hit us and they would do anything that they wanted to do to us. What could we possibly do more to that, besides just wait until Korea was liberated?" Ahn says.

The practice ended in 1945, with the end of the war. Ahn is one of a few dozen comfort women still alive.

Koreans feel the pain of what happened to these women so deeply that Korean populations in the diaspora have put up replicas of the statue in places as far-flung as New Jersey, California, Australia and Germany.

In South Korea, they're in about 50 different parks and public spaces. But Japan wants these statues to come down. Some in the country's ruling party have questioned whether the war-era imperial government was really involved in the sex slave program — or, as they contend, the women volunteered.

A few years ago, Japan and South Korea struck a landmark deal regarding the comfort women. It required Japan to compensate victims and "issue a statement of regret." In return, South Korea would remove the first of these bronze girls, which went up in 2011 in front of the Japanese Embassy in Seoul.

But Korean citizens and activists never accepted the deal. They keep putting more statues up. One angered the Japanese government so much that in January, it recalled its ambassador from Seoul for a few months.

The latest memorial is showing up on the seats of South Korean city buses. The figure shows the same short-haired, seated girl, with her hands clenched in her lap. Instead of bronze, the statue is painted — black hair, light skin, wearing a dress.

It makes for some surprises.

"I wasn't scared, I wasn't shocked, but I was like, what is this? I saw it on TV a couple of times but I'm seeing it for the first time in real life," says bus rider Yoon Sung-Lim.

For the activists installing these statues, the idea is to keep the issue alive now that the victims are growing older and dying.

"By having these statues, we'll have high school students and younger generations be curious what the meaning is behind these statues, ask their older generations and ask their parents or their friends what this means, and actually receive a proper explanation and know what happened," says Kim Hyang-mi, who led the effort to get the statues on the city of Suwon's buses.

In Seoul, the seated statue rolls around on bus No. 151 — which stops right in front of the Japanese Embassy. The girl is visible every time the bus doors open. 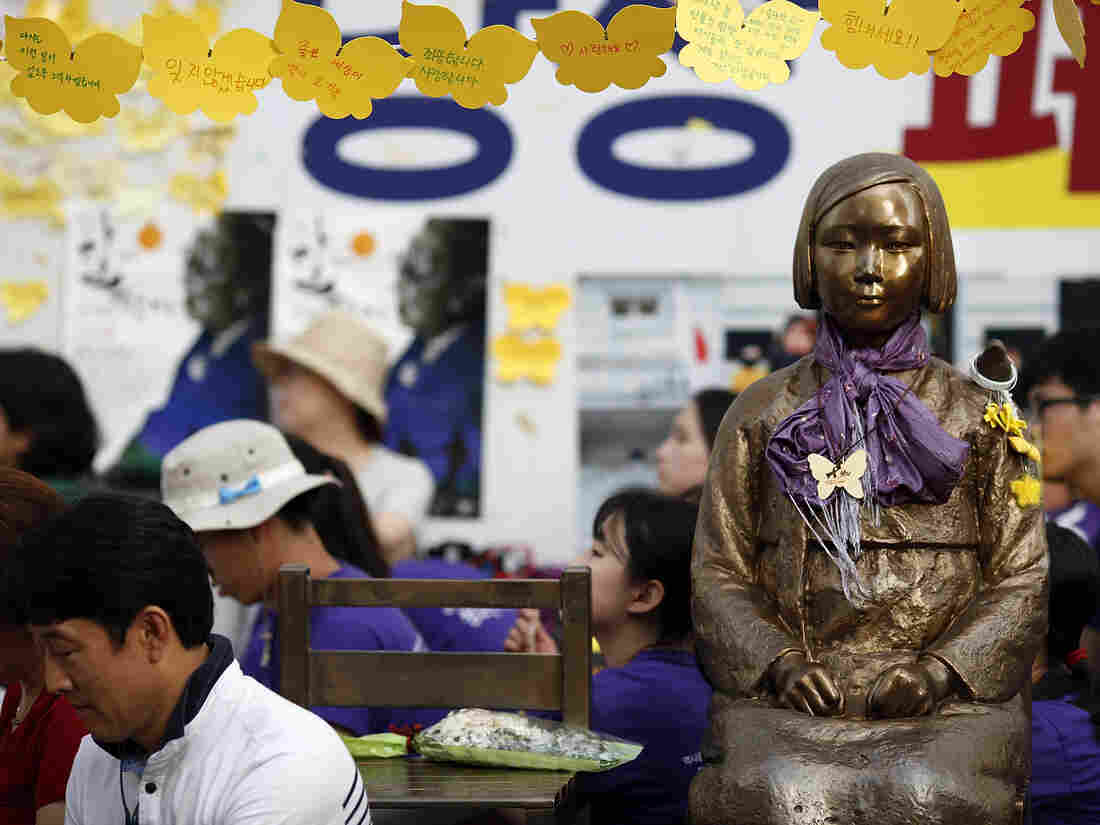 A statue memorializing South Korea's comfort women was placed in front of the Japanese Embassy in Seoul in 2011. Woohae Cho/Getty Images hide caption 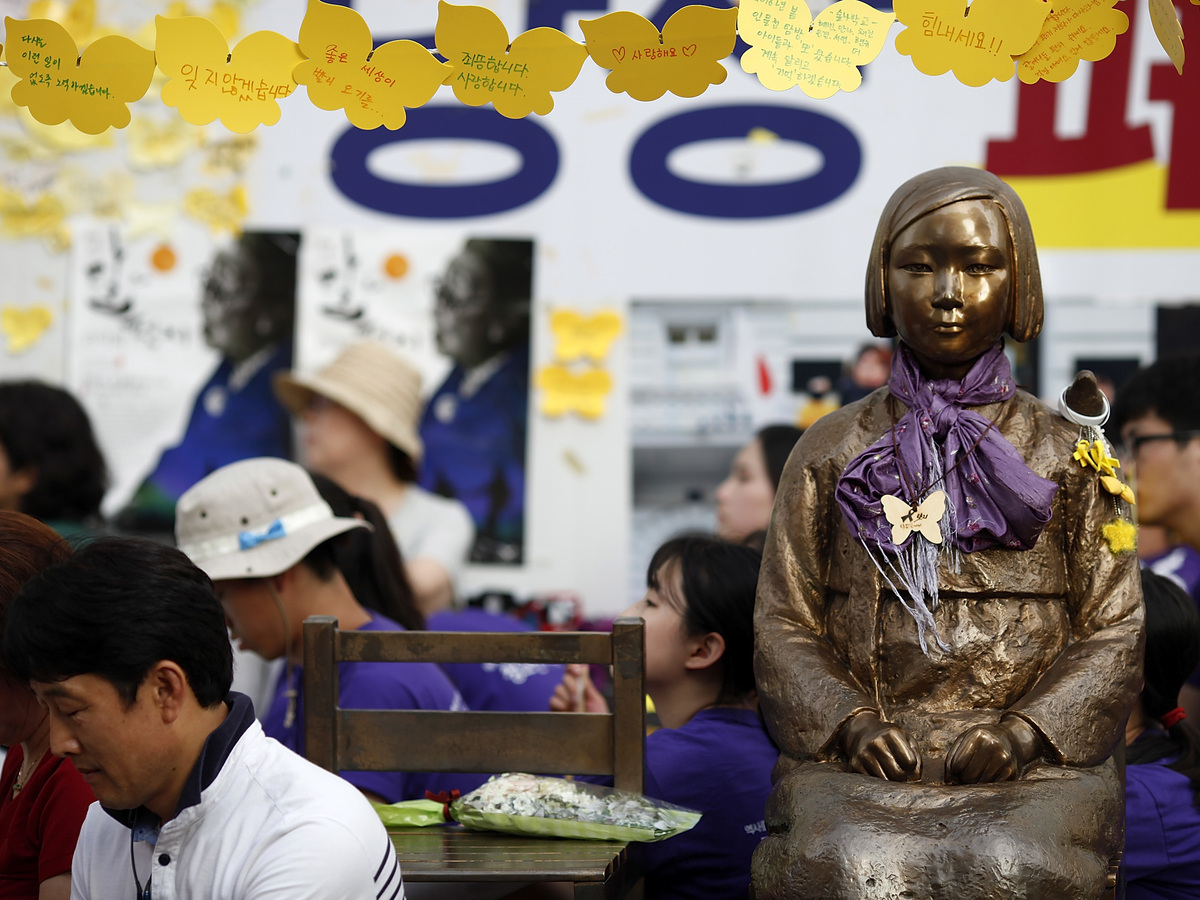 A statue memorializing South Korea's comfort women was placed in front of the Japanese Embassy in Seoul in 2011.

"This is a victim among us. And you're sort of confronted when you step aboard the bus, you don't know which bus it's going to be, but here she is and it could be any of us," says Alexis Dudden, a professor of Japanese history at the University of Connecticut. "I think as long as this particular administration in Japan seeks to discredit and shred the dignity of the survivors of this crime against humanity, absolutely, put it right on their front doorstep."

Dudden points out that while the U.S. and other countries debate whether to take down monuments to participants in or perpetrators of war, Japan is doing something different.

"It remains only Japan that is seeking to remove a statue of a victim. Politically speaking, there's just no winning in that," Dudden says.

Ahn, the former sex slave, says she never got married or had children after what happened to her during the war. She didn't start speaking out about her story until the 1990s. She says she doesn't want compensation from Japan.

And she wants the statues to stay.