Accessibility links
Indonesia Aims To Attract More Muslim Visitors In 'Halal' Tourism Push : Parallels Halal tourism is an emerging trend in the travel industry: holidays that don't just accommodate, but actively cater to, devout Muslims. Indonesia is trying to market itself as a halal destination. 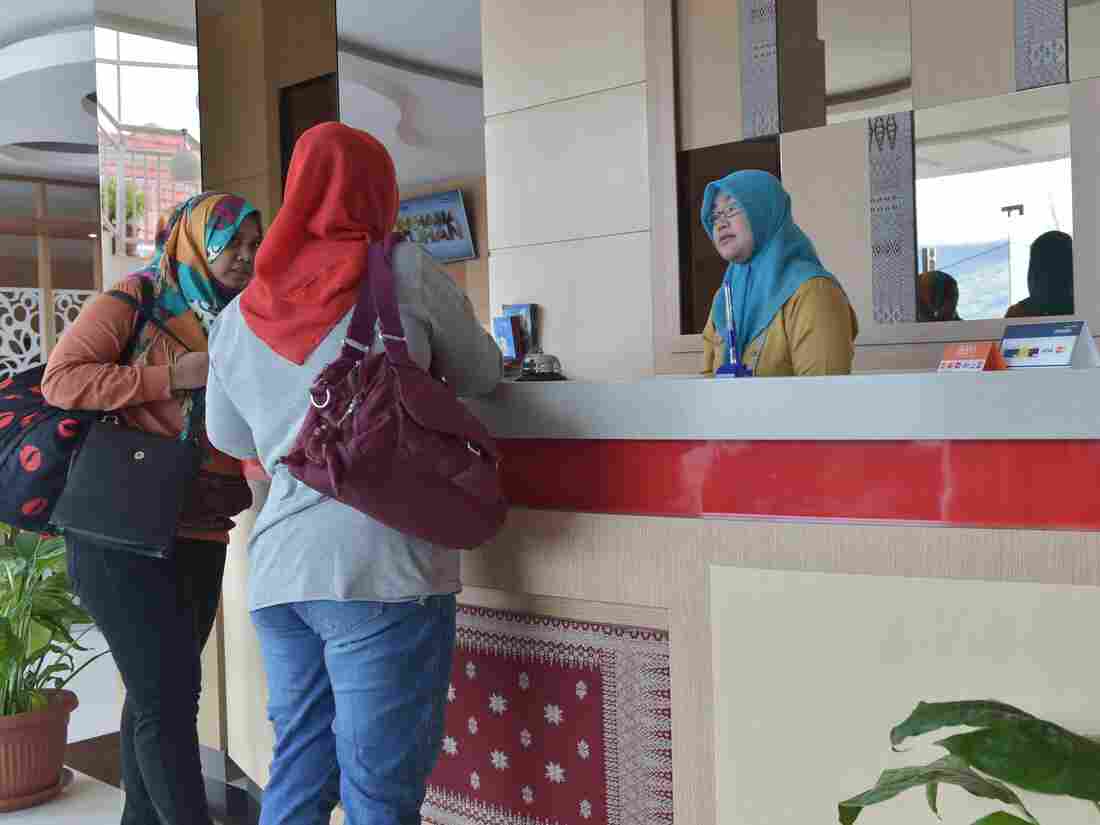 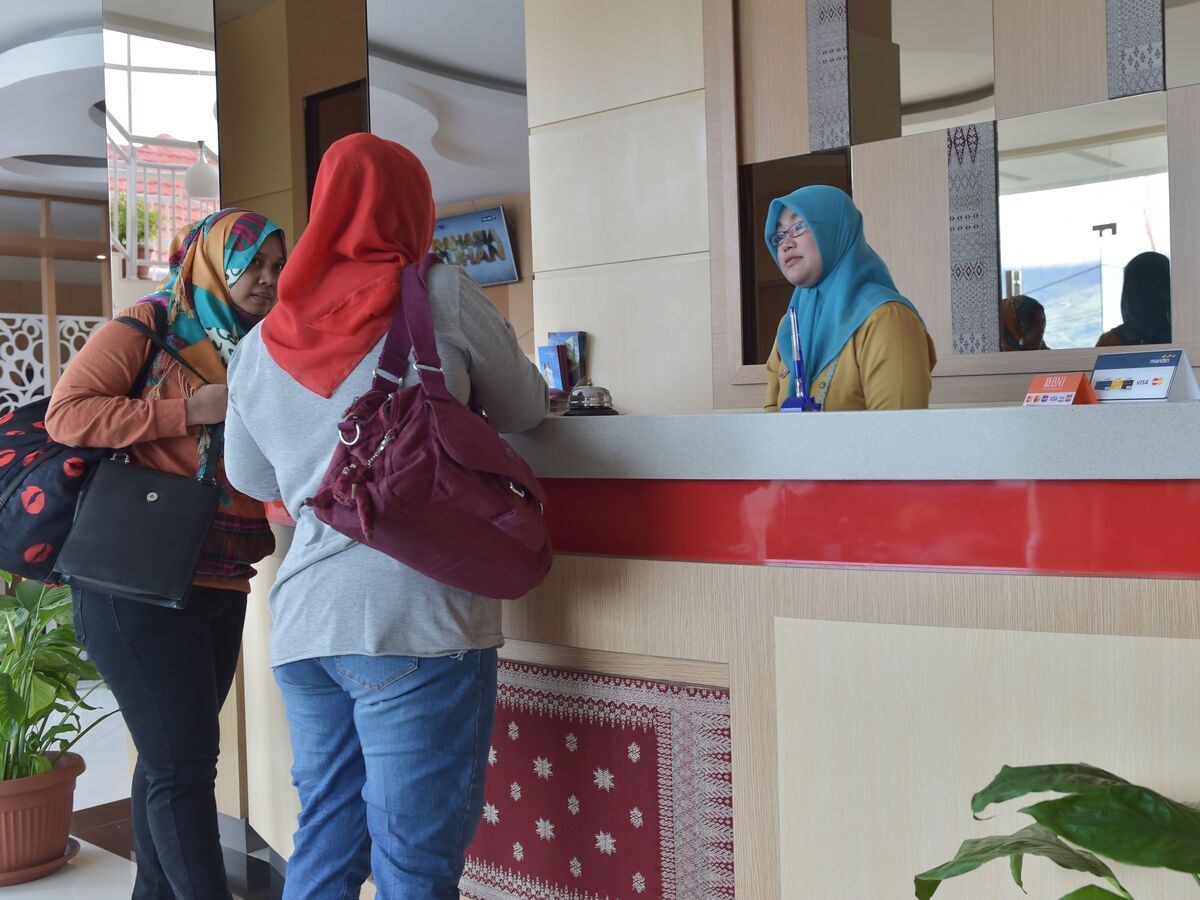 Tourists stay at a halal-friendly hotel in Bukit Tinggi, West Sumatra, Indonesia. Three Indonesian provinces have been officially listed as halal tourist destinations by Indonesia's Tourism Ministry, in a bid to increase the number of Muslim travelers from Asian and Middle Eastern countries.

On Gili Trawangan, an islet off the coast of Indonesia's verdant Lombok island, tanned and pinkish Westerners in bathing suits mingle in the same restaurant as a group of hijab-wearing women from Malaysia on a corporate retreat. There is a large mosque just off the main road whose last call to prayer at night can be heard through the beat of live reggae bands.

Tourists flock to Indonesia from all over the world to enjoy its beaches, wildlife and heritage sites. But many are coming for religious reasons, too. In 2015, Lombok, whose population is 90 percent Muslim, was dubbed the "world's best halal tourism destination" at an annual Muslim travel industry event in Dubai. The island — which has long been overshadowed by glamorous, Hindu-majority Bali, just a 30-minute flight to the west — eagerly seized on the distinction as a unique touristic selling point.

"We don't have to be the 'Muslim Bali,'" Muhammad Adi Farchan, a halal tour operator, said in the coastal Lombok town of Senggigi. "We are just Muslim Lombok! Muslim paradise."

If the phrase "halal tourism" — which came into vogue about a decade ago — seems neologistic, it's nevertheless at the cusp of an emerging trend in the travel industry: holidays that don't merely accommodate religious Muslims, but actively cater to them. A term most commonly used to describe food provenance, "halal" more broadly means religiously permissible per Muslim law.

As the world's largest Muslim country, Indonesia has pinned hopes on the halal market to expand its $13 billion tourism industry, which lags behind those of neighbors like Thailand and Singapore. Lombok is in West Nusa Tenggara province, which is one of three government-designated "priority" halal destinations, along with West Sumatra and Aceh. Jakarta's deputy governor Sandiaga Uno has expressed interest in developing a "sharia tourism zone" in the nation's capital, and recently announced that the city would build "sharia-based" hotels.

About 2.7 million tourists visited halal destinations in Indonesia in 2016, according to a Tourism Ministry spokesperson, out of about 12 million foreign tourists in total. The greatest increase was seen in Lombok, which the ministry credits to halal tourism.

Lombok welcomed about 3 million foreign and domestic tourists last year. On this island, nearly all the food — fish satay, chicken smeared with eponymous Lombok chili sambal — is already halal, and you're never more than five minutes from a mosque. Nearly every hotel, restaurant and beach club has a musholla, or prayer room. And since the island's population is mostly Muslim, the odds are that a tour guide for any activity — from trekking the volcanic Mount Rinjani to diving with sea turtles — can accommodate religious considerations. 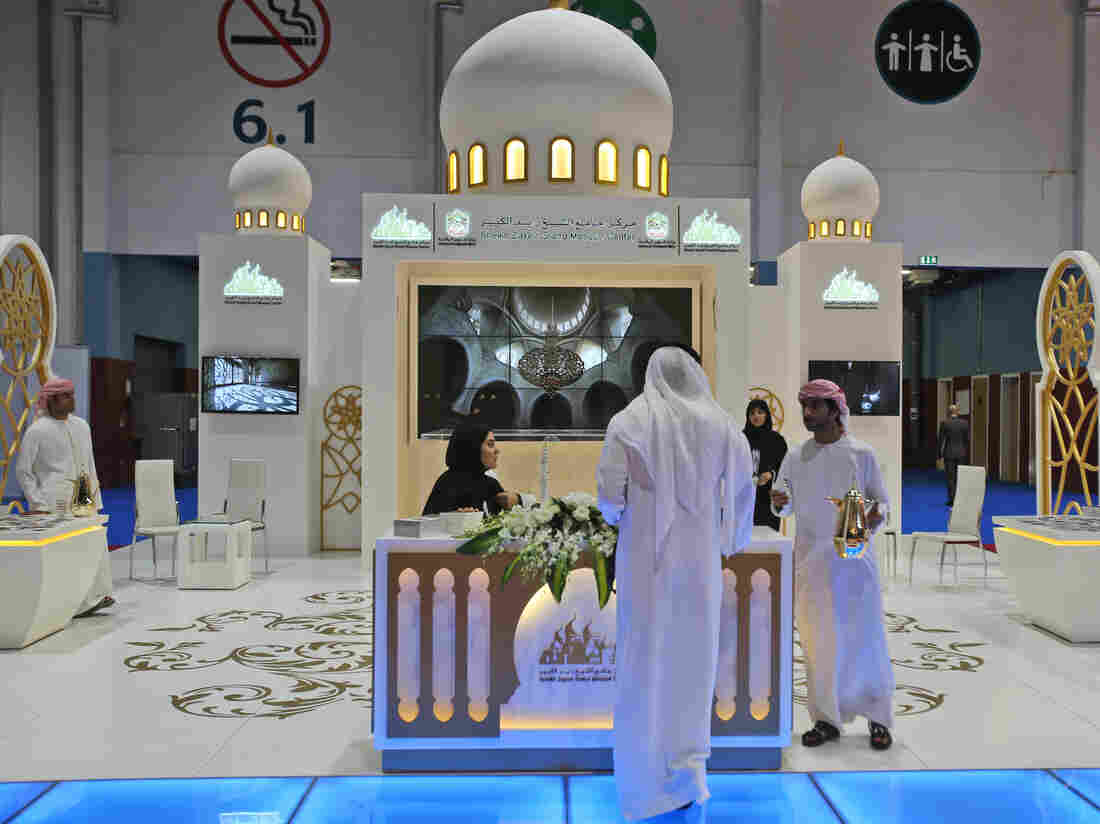 An exhibitor offers traditional Arabic coffee to a visitor during the opening day of the 2015 World Halal Travel Summit in Abu Dhabi, United Arab Emirates. Halal tourism is growing as the hospitality industry seeks ways to better serve Muslim travelers, from providing alcohol-free venues to swimming areas that are segregated by gender. Kamran Jebreili/AP hide caption 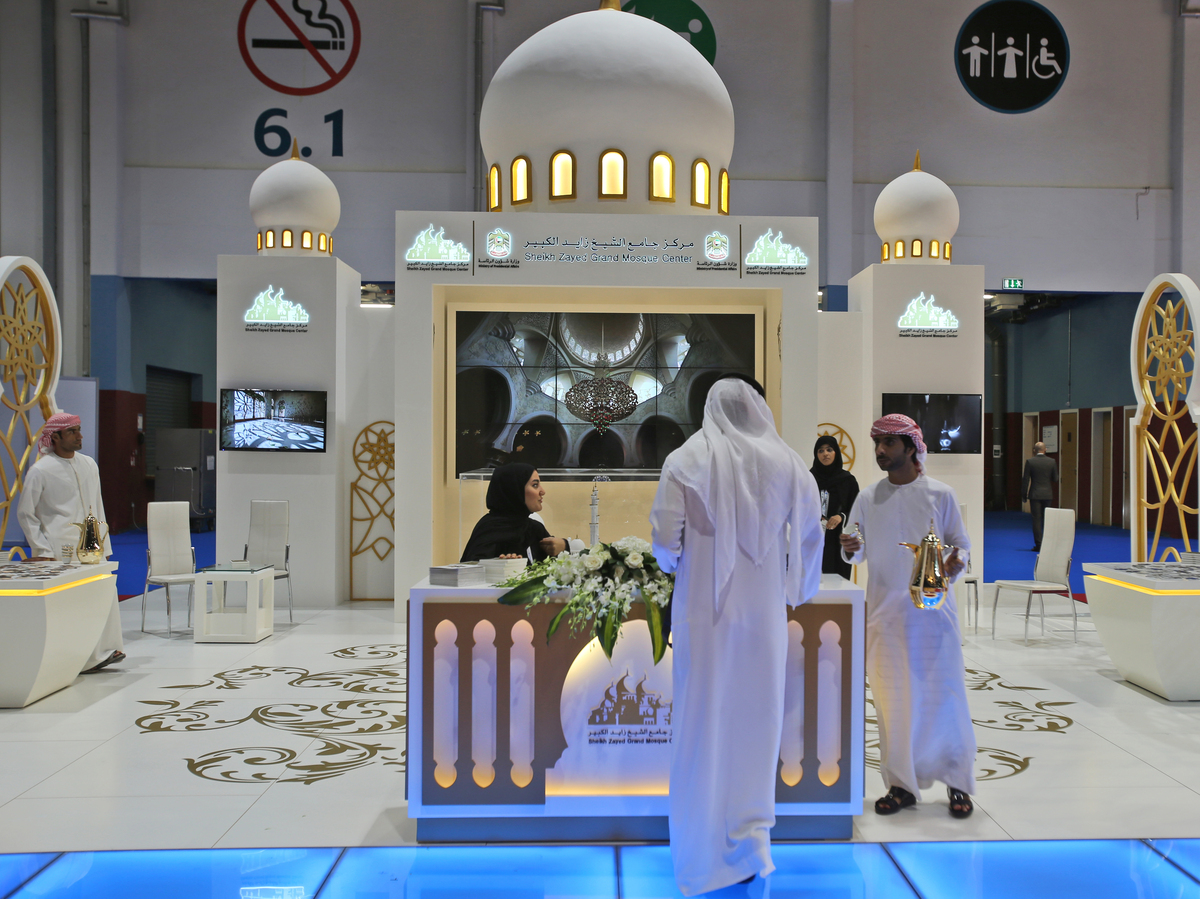 An exhibitor offers traditional Arabic coffee to a visitor during the opening day of the 2015 World Halal Travel Summit in Abu Dhabi, United Arab Emirates. Halal tourism is growing as the hospitality industry seeks ways to better serve Muslim travelers, from providing alcohol-free venues to swimming areas that are segregated by gender.

"Indonesia is great to visit because we don't have to explain why we want things like prayer rooms and certified halal food," said Omar, a 52-year-old tourist from Saudi Arabia who did not want to use his last name, at the flagship Islamic Center mosque complex in the provincial capital Mataram. "Everyone is Muslim, so they already understand."

Such travelers could significantly boost Indonesia's tourism revenue, officials hope. Visitors from the United Arab Emirates and Saudi Arabia spend more money on average — about $1,500 to $1,700 per person per trip — than other tourists to Indonesia, who spend around $1,200 per person, according to Arief Yahya, Indonesia's tourism minister.

But the number of Middle Eastern and Gulf tourists to all of Indonesia hovered around just 200,000 last year, compared to 600,000 who visited nearby Thailand. To attract more of these lucrative tourists, Indonesia has pushed for more direct flights from Gulf carriers like Emirates, Qatar Airways and Etihad Airways and reframed its promotion of destinations outside Bali.

That includes Aceh, a conservative province on Sumatra that's perhaps best known for being governed by sharia or Islamic law, which now has slick signs plastered in its airport advertising its appeal as a halal destination. Aceh has miles of unspoiled diving beaches, historic mosques and the Leuser Ecosystem rain forest. But facets of Acehnese life that might deter other visitors, such as the banning of alcohol, can work as selling points for devout Muslim travelers.

Those in the travel industry describe Muslim travelers as the next "billion-person market," after India and China. Almost a quarter of the entire world's population is Muslim.

For three years, Bahardeen's company has issued an annual report on global halal tourism in conjunction with MasterCard. The 2017 report, released in May in Jakarta, estimates the number of international Muslim travelers at 121 million, accounting for about 10 percent of the world's travel industry.

"Almost 60 percent of them travel to Asia, which makes the continent the key region of growth for halal tourism," said Bahardeen.

Bahardeen's estimate, based on various countries' raw tourism data, lines up with a 2015 report on the global Islamic economy by Thomson Reuters, which pegged the global Muslim travel market in 2014 at $142 billion – excluding pilgrimages for the Hajj and Umrah — accounting for about 11 percent of global travel expenditure. That was a 6.3 percent increase over the previous year.

CrescentRating also ranks countries on their suitability for religious Muslim travelers. For the last three years, Malaysia has ranked as the No. 1 country overall for halal holidays. Southeast Asia in general has a strong presence on CrescentRating's list, with Indonesia in third place. The United Arab Emirates ranks second.

The criteria include halal food availability, facilities for the five daily prayers, "water-friendly" bathrooms (some Muslims prefer using bidets or hand-showers to toilet paper, and prefer special taps for wudhu, ritual ablutions before prayer) and accessibility of family-friendly areas away from nightclubs and casinos.

But non-Muslim nations are getting on board, too. In March, Al Meroz, which bills itself as "Bangkok's leading halal hotel," opened its doors in the Thai capital. The luxury hotel, run by an observant Muslim, doesn't sell alcohol, offers a female-only floor for women traveling solo, maintains separate male and female hours for its gym and pool and makes sure even its detergents are free of animal fat (pig and pork products are forbidden for observant Muslims).

Japan, which offers visa-free entry to Indonesians and Malaysians, is home to several halal tourism outfits and has had halal restaurants and prayer rooms at Narita International Airport since 2014. One of those restaurants even supplies halal in-flight meals to carriers including Malaysia Airlines; Japan Airlines started serving its own such meals last year.

Food is one of the major sticking points for observant Muslims traveling in non-Muslim countries, said Mikhail Goh, the Singaporean founder of the website Have Halal, Will Travel, whose Facebook page has 157,000 followers.

"Oftentimes, you'll find Muslims, especially those from Asia, with their bags packed with food in the event that halal food is not easily available," he said.

Goh's website recently released an eponymous app with halal city guides for Seoul, Tokyo and Singapore. "Countries like Japan and Korea are increasingly Muslim-friendly," he said, "but there was a lack of rich information on where to find halal food options or prayer spaces."

The exact definition of halal differs from country to country – the UAE, for example, requires extensive documentation that products follow sharia and prohibits the sale of pork products to Muslims, whereas Indonesia still does not have a federal halal certification body – but apps like Goh's can help guide travelers in the right direction.

In Indonesia, authority for halal designation lies with the Indonesian Ulema Council, and there are analogous bodies in other Muslim countries. But in Muslim-minority countries it is ad hoc: In Japan alone, there are about 10 different halal certification bodies, says Ayang Utriza, an Islamic law expert at the Catholic University of Louvain in Belgium.

Back in Lombok, some tour operators have made a brisk business of arranging excursions for visiting ulema, or Muslim scholars.

"When ulema come to Indonesia as visiting preachers or for religious holidays, they frequently stop in Lombok," says Farchan, the halal tour operator. "I or one of the other halal tour guides will help arrange private visits for them to one of the halal gilis," the small islands that dot the Lombok coastline.

Farchan is a Salafi Muslim, meaning that he follows the Sunni fundamentalist school originating in the Gulf that seeks to return to the early Islam of Quranic times. He says he has helped vacationing Salafi preachers, both from Java and the Middle East, to relax in religiously acceptable surroundings in Lombok. They can decamp to single-sex beaches, for instance, after lecturing in Mataram, the mainland capital.

All this seems to raise a question of an inevitable culture clash between sybaritic beach bums and devout visitors. But so far, the spirit of halal tourism, at least in Indonesia, seems to be one of live and let live.

One place that's not likely to ride the wave of halal tourism? The United States.

"People are concerned with safety and Islamophobia in the U.S., especially," said Goh. "Based on what we've observed of our audience, traveling to the U.S. is less desirable than other destinations that are closer to home or are known to be more tolerant towards Muslims." But, he adds, this has not stopped Muslims' desire to travel in general.

Krithika Varagur (@krithikaltheory) is a freelance journalist based in Indonesia.