Accessibility links
Under Trump, U.S. Troops In War Zones Are On The Rise : Parallels The U.S. military had around 18,000 troops in Syria, Iraq and Afghanistan at the end of last year. The official numbers have gone up in all three countries and now total about 26,000. 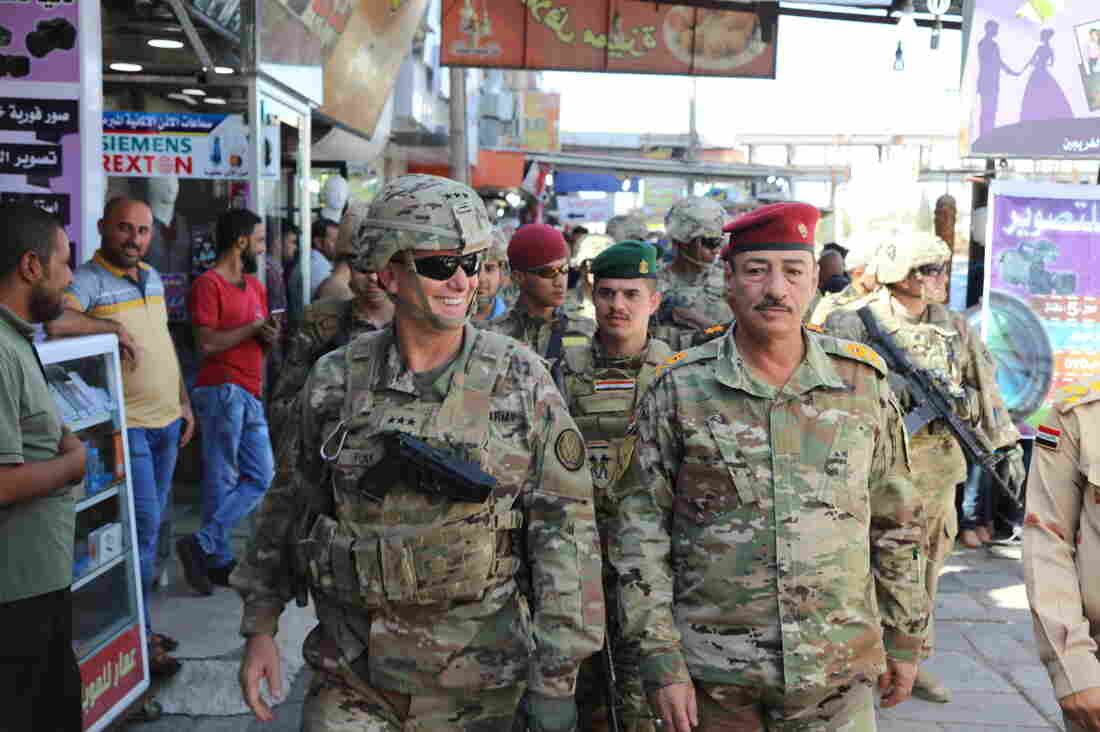 U.S. Army Lt. Gen. Paul Funk (left), and Iraqi Maj. Gen. Najm Abdullah al-Jibouri, walk through a busy market in Mosul, Iraq, on Oct. 4. U.S. forces in Iraq, Syria and Afghanistan have been increasing this year under President Trump, going from about 18,000 at the beginning of the year to 26,000 recently, according to Pentagon figures. Spc. Avery Howard/AP hide caption 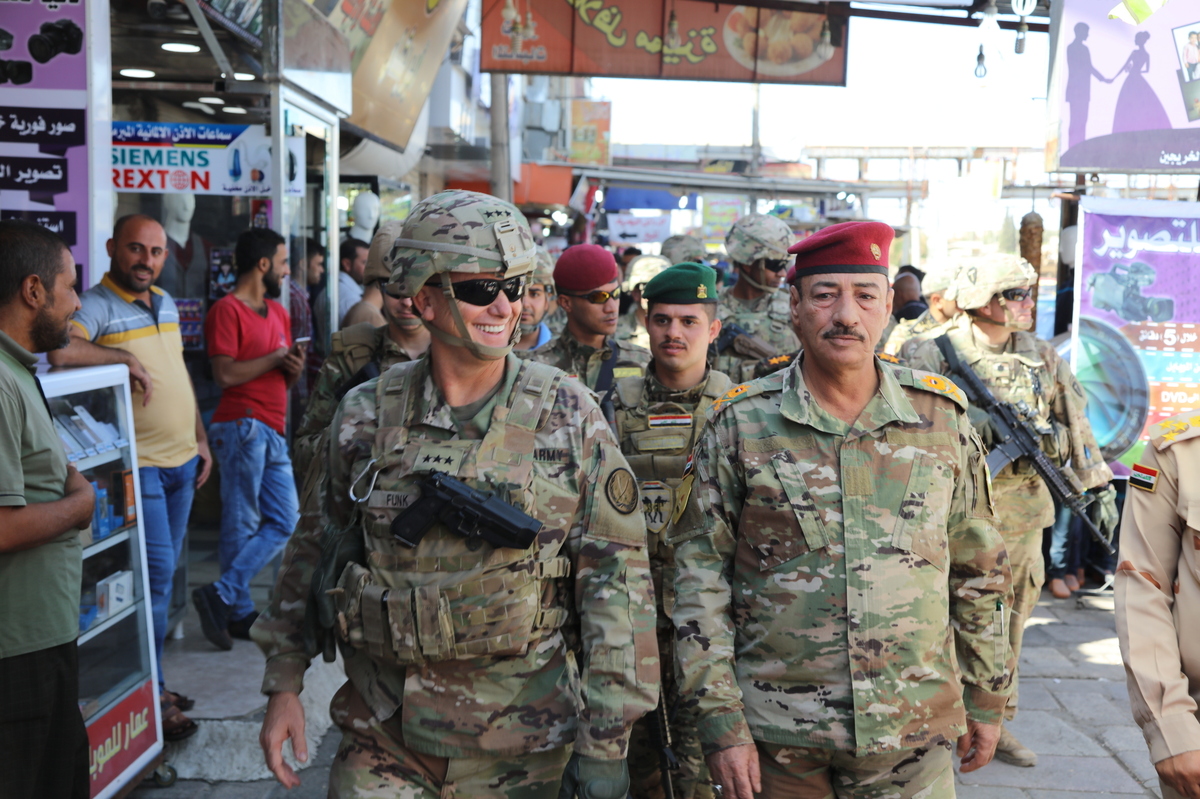 U.S. Army Lt. Gen. Paul Funk (left), and Iraqi Maj. Gen. Najm Abdullah al-Jibouri, walk through a busy market in Mosul, Iraq, on Oct. 4. U.S. forces in Iraq, Syria and Afghanistan have been increasing this year under President Trump, going from about 18,000 at the beginning of the year to 26,000 recently, according to Pentagon figures.

Since President Trump came into office, U.S. troop numbers have been edging up in the three countries where the U.S. is most deeply involved in fighting — Syria, Iraq and Afghanistan.

U.S. forces totaled just over 18,000 in these three countries at the end of last December, just before President Obama completed his term, according to the Pentagon's Defense Manpower Data Center.

The combined figure was about 26,000 as of the end of September, the most recent data available from the Pentagon.

Neither President Trump nor the military likes to talk about troop numbers. A Pentagon spokesman, Army Col. Rob Manning, said multiple factors can be influence the figures, such as troop rotations, the changing nature of military missions and the political sensitivities of the host country.

He told reporters not to place too much stock in the quarterly figures put out by the Defense Manpower Data Center.

"The DMDC numbers are not the official deployment count," he said. "There are several other things that go into those numbers, it is a snapshot in time."

Yet these figures point to a troop presence in multiple countries that is substantially higher than Pentagon officials acknowledge.

For example, Pentagon spokesmen often cite a figure of around 500 U.S. forces in Syria. But the Pentagon report on manpower puts the number at 1,720.

When President Trump outlined his plan for Afghanistan in August, he authorized additional forces, and the numbers there have risen from 11,000 at the end of last year to more than 15,000 recently.

The president has made clear he wants the generals to wage these wars as they see fit and he does not intend to delve into the tactical details.

Defense Secretary Jim Mattis has pledged greater transparency on the question of troop numbers. But the latest report points to inconsistencies that still exist.

For perspective, all these numbers are relatively small compared to what they were at the height of the U.S. ground wars in Iraq and Afghanistan nearly a decade ago, when the combined troop total approached 200,000.

Also, U.S. forces currently deployed in Iraq, Syria and Afghanistan are engaged primarily in air campaigns and are working to train and assist local allies.

A Timeline — And Questions — About The Niger Firefight That Killed U.S. Troops

The main U.S. target in Iraq and Syria — the Islamic State — has lost virtually all the territory it once controlled. This is changing the nature of these two conflicts, though it's not clear what impact it might have on U.S. troop levels. In Afghanistan, the longest war in U.S. history, now 16 years and counting, is widely seen as a stalemate.

The U.S. forces in these and other countries are not supposed to be involved in ground combat, though circumstances do bring them into the line of fire at times.

Four U.S. troops were killed in an ambush on Oct. 4 in the African nation of Niger, a deployment the U.S. military has acknowledged but doesn't discuss in detail. The U.S. officially had 546 troops in Niger at the end of September, where the forces are working with the local army against radical Islamist groups.

Somalia has been a sensitive place ever since U.S. Black Hawk helicopters were shot down during a 1993 mission, leading to a U.S. withdrawal. But as of two months ago, the U.S. military presence was up to 289 in Somalia, part of a campaign against al-Shabaab militants, a group aligned with al-Qaida.

The Pentagon report puts the total U.S. troop presence abroad at just over 257,000. These range from large, long-standing contingents — such as in Japan (45,000) and Germany (36,000) — to tiny, single-digit deployments in many smaller nations.