Accessibility links
How 1,000 Volvos Ended Up In North Korea — And Made A Diplomatic Difference : Parallels In the 1970s, Sweden shipped Volvos to North Korea as part of an ill-fated trade deal. North Korea never paid for the cars. But Sweden remains an important Western diplomatic presence in Pyongyang. 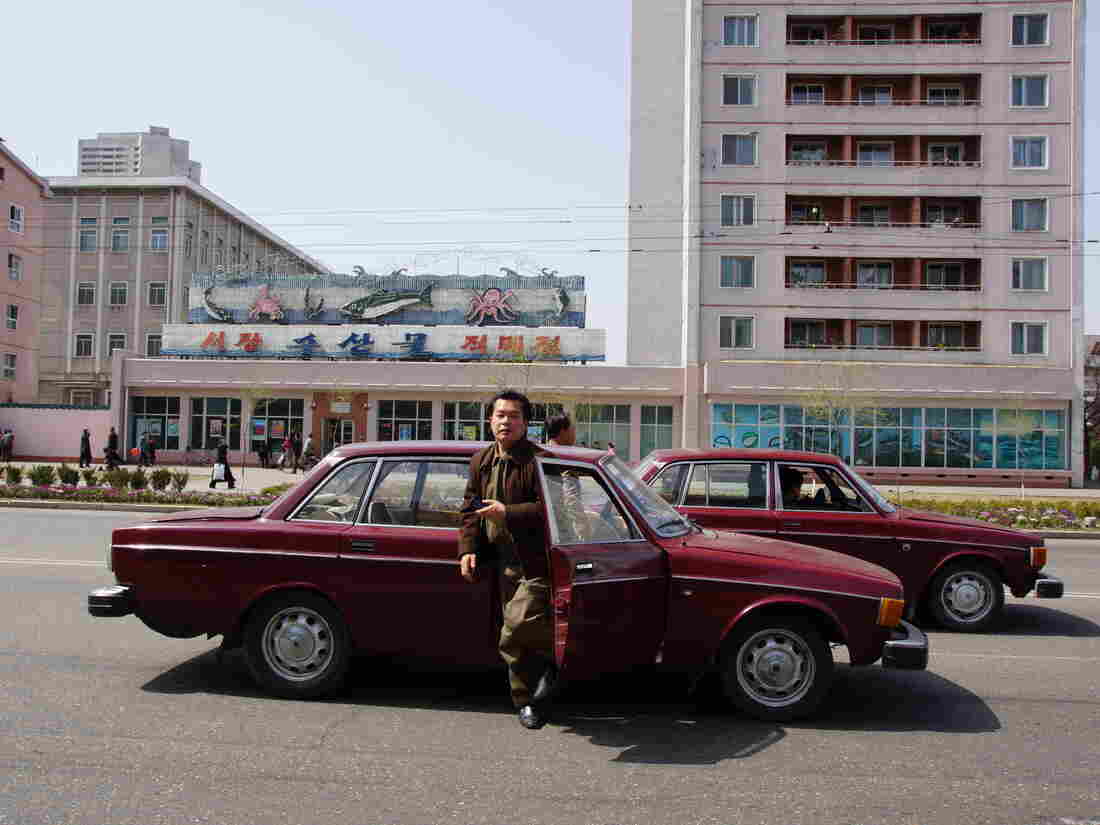 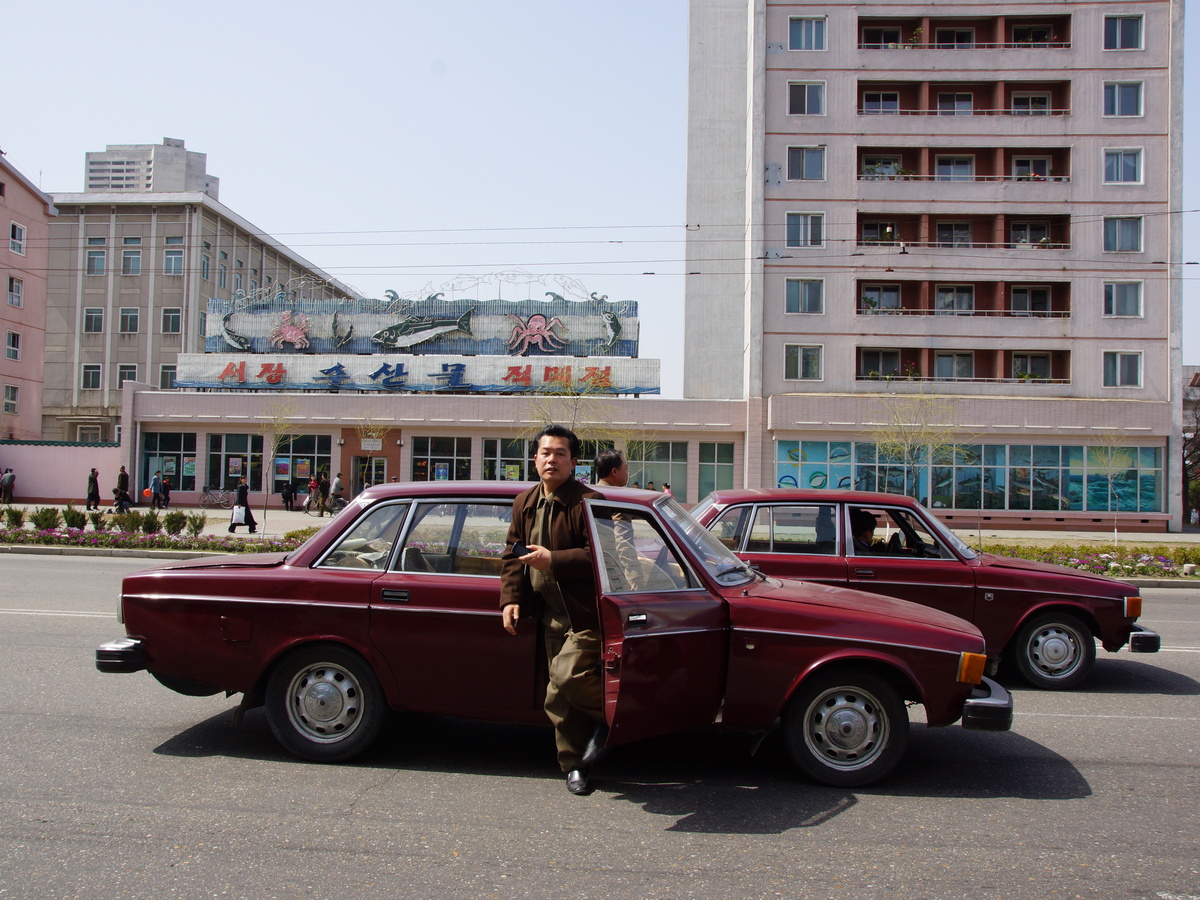 Twenty-eight years ago, U.S. journalist Urban Lehner was riding in the back seat of a speeding Volvo 144 sedan. He was on assignment for The Wall Street Journal in North Korea. The road out of Pyongyang was empty.

"The 1973 Volvo screeches around tight curves, slaloming across all five lanes of the road," he wrote in an article dated Aug. 29, 1989. "In another country it would be a suicide ride, but in North Korea so few cars ply the highways that each can often have the road to itself."

Looking back now at his two-week trip, Lehner remembers going everywhere in that Volvo. He says visiting journalists usually rode in them.

"You had an interpreter and a driver and a Volvo, and you were a family for two weeks," Lehner says. "Honestly, they were great cars. Even when you slalomed across five lanes, they were basically safe."

But how did the Volvos get to North Korea?

Lehner heard rumors from other reporters. 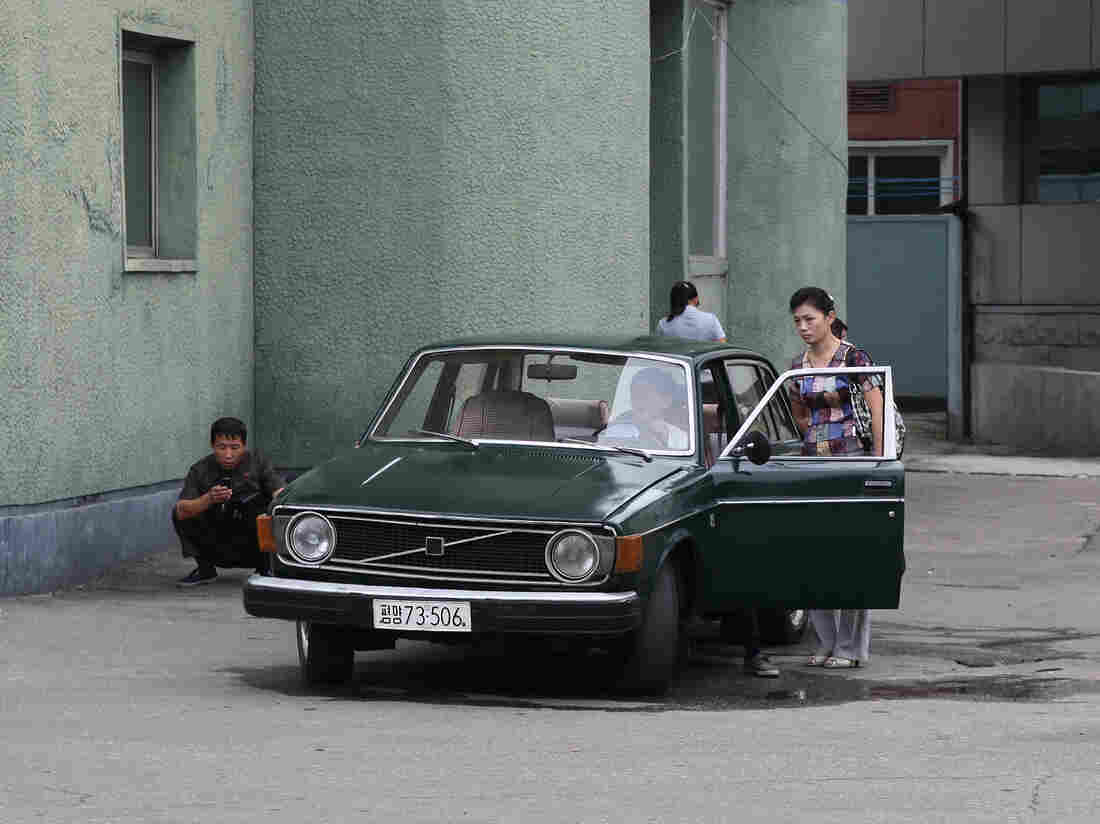 Tourists, such as the one who shot this photo in September 2010, still report seeing 1970s-era Volvos on North Korean roads. Roman Harak hide caption 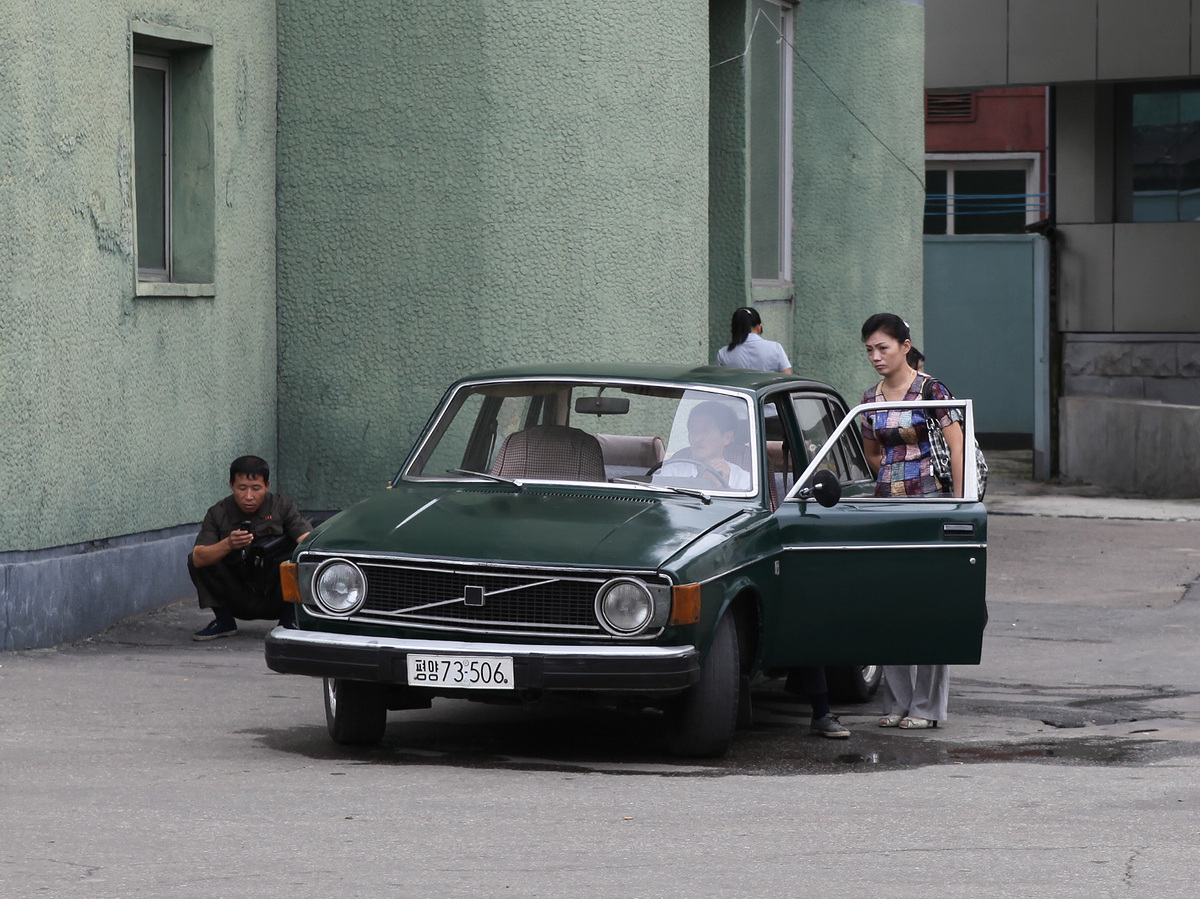 Tourists, such as the one who shot this photo in September 2010, still report seeing 1970s-era Volvos on North Korean roads.

"We had heard the story that the North Korean [authorities] had bought these cars, then stiffed Volvo and not paid," he says. "We joked that we were riding around in stolen cars."

Decades ago, when Volvo 144s — sturdy, boxy sedans that were made until 1974 — were still in production, Swedish businesses started expanding into a promising new market: North Korea.

From the exporters' point of view, there was money to be made in North Korea's emerging economy.

"At the time, [North Korea] wasn't doing so badly," explains Jonathan D. Pollack, a senior fellow at the Brookings Institution. "After the Korean War, their economy was rebuilt, it became a functioning industrial state, still very aid-dependent — but it wouldn't have seemed like such a bad bet, under the circumstances."

Sweden shipped over $70 million worth of products. So much had been invested into North Korea that Swedish export companies — and left-leaning politicians — encouraged Sweden's Ministry for Foreign Affairs to send a diplomat there. 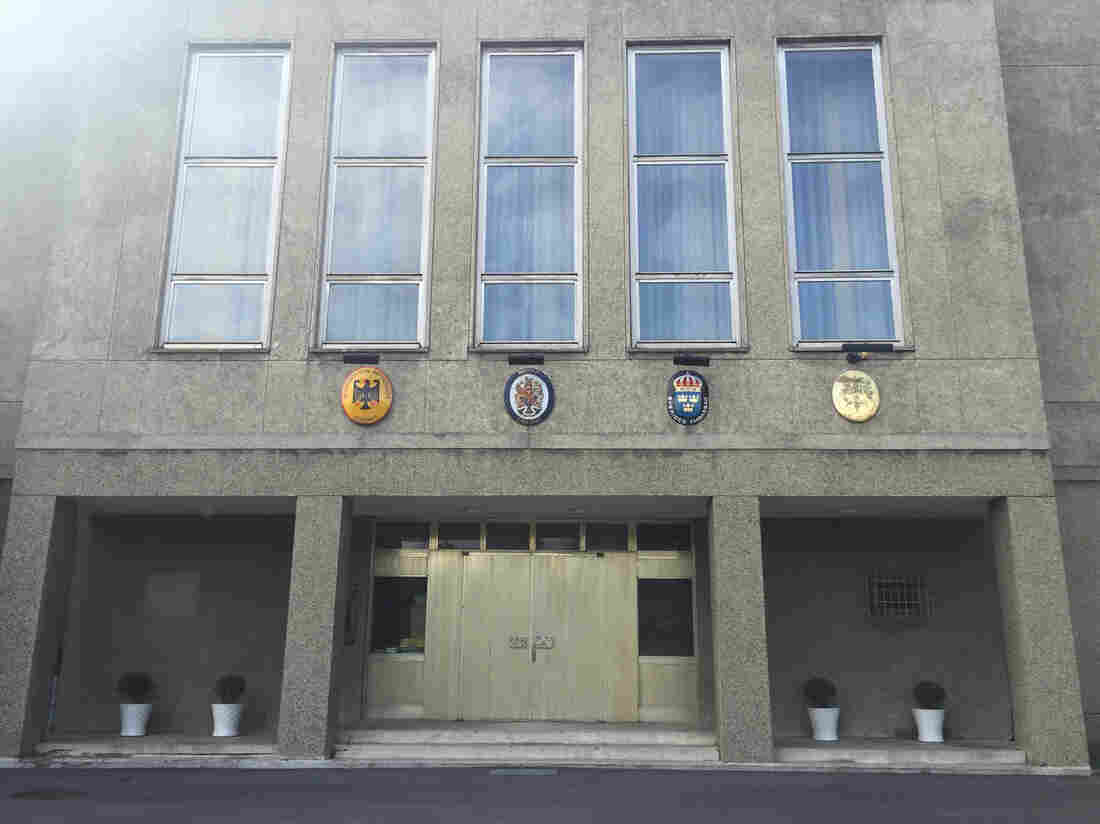 Sweden has maintained its embassy in North Korea since 1975. Until 2001, Sweden was the only Western country with diplomatic representation there. There are just two dozen foreign embassies in the country. The Embassy of Sweden in Pyongyang hide caption

toggle caption
The Embassy of Sweden in Pyongyang 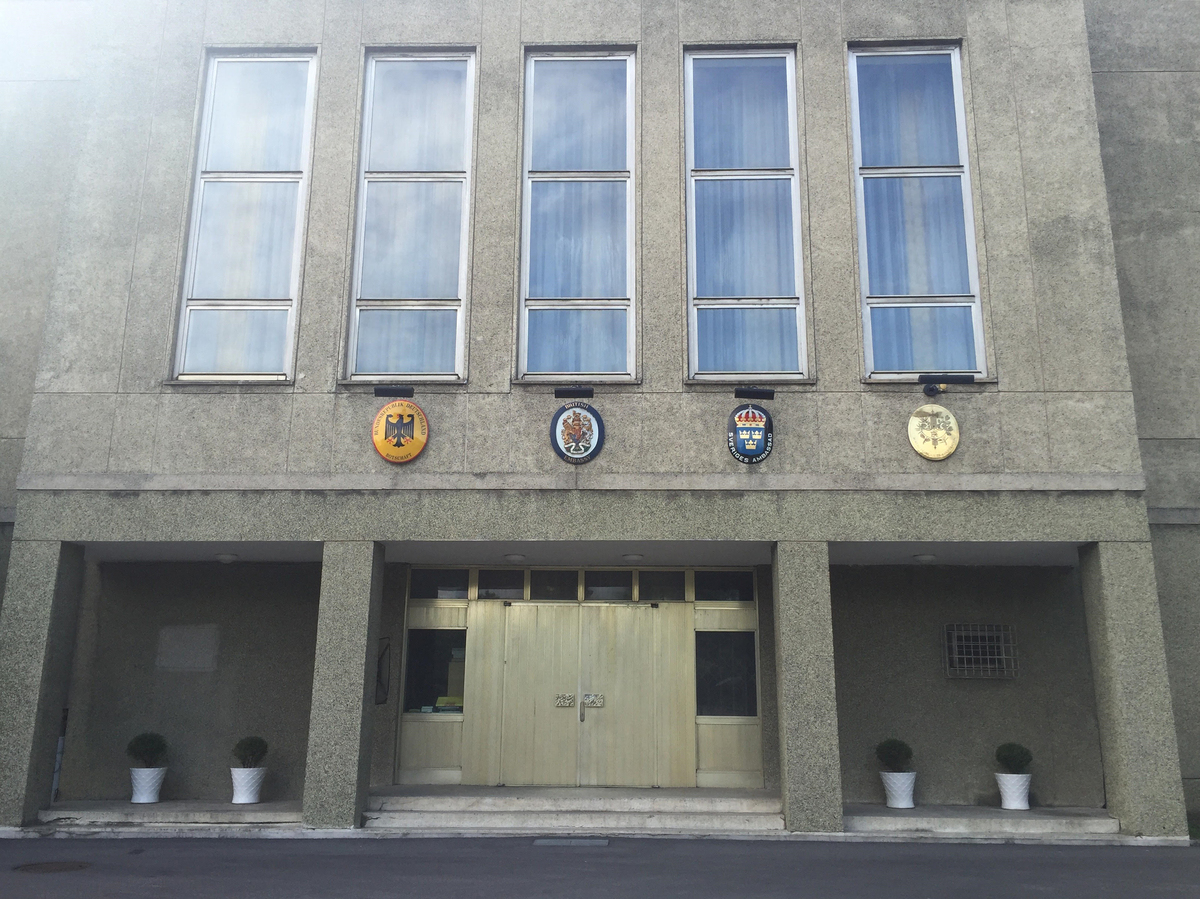 Sweden has maintained its embassy in North Korea since 1975. Until 2001, Sweden was the only Western country with diplomatic representation there. There are just two dozen foreign embassies in the country.

The Embassy of Sweden in Pyongyang

And so, in 1975, Sweden became the first Western country to establish an embassy in Pyongyang.

"They asked me if I would like to open this embassy in North Korea," says Erik Cornell, a veteran Swedish diplomat. "And I said, 'Yes.' "

Cornell, now 87, joined the ministry in 1958 and had served in Bonn, Warsaw and Addis Ababa, Ethiopia. He arrived in North Korea, then led by Kim Il Sung, in the winter of 1975.

"It was an empty country. Snowy, windy, cold. And we came to Pyongyang. You know, you started from scratch when you came there," says Cornell, who now lives outside Stockholm.

Cornell served as the embassy's chargé d'affaires until 1977. The capital city was sparse.

"You couldn't drop into a cafe or a restaurant because there were none," he says. Sometimes, all he could do was go out for short drives in his Volvo. "That was the conditions of life."

Cornell was tasked with making sense of North Korea's economic situation – and, as he quickly found out, the numbers weren't adding up. 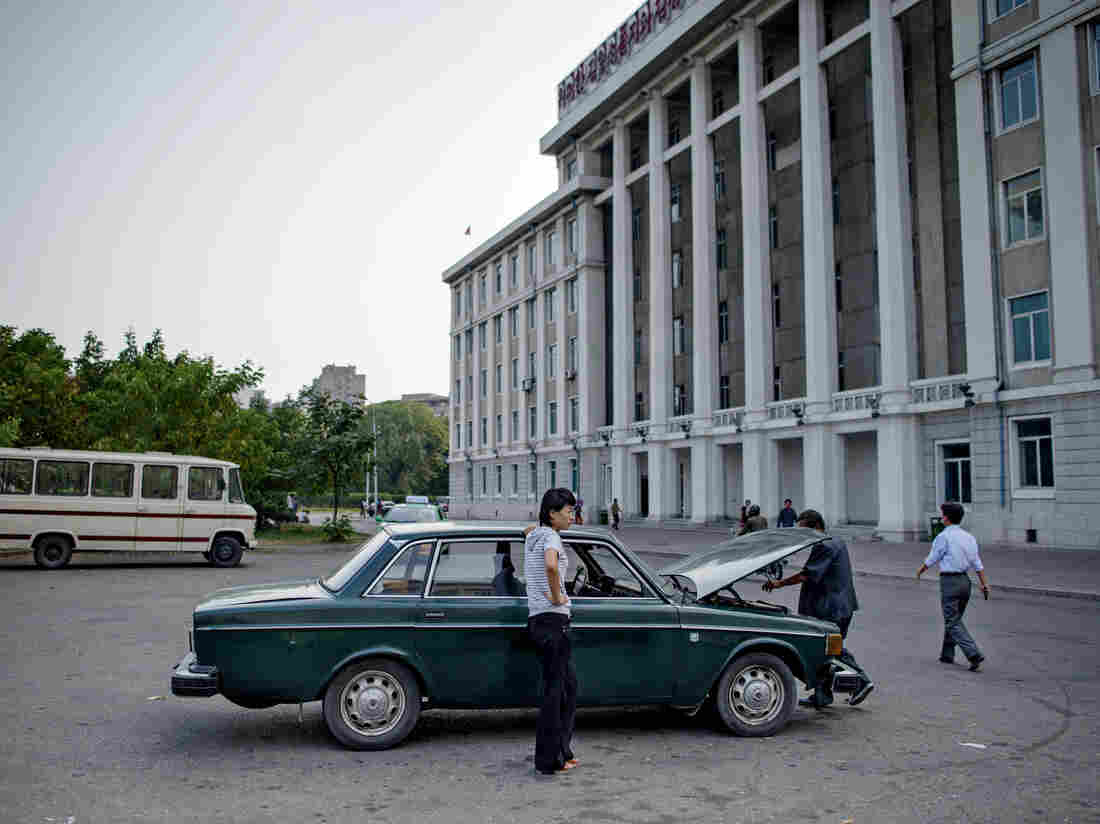 In September 2013, a man takes a look under the hood of a Volvo 144 in Pyongyang. Jonas Gratzer/LightRocket via Getty Images hide caption 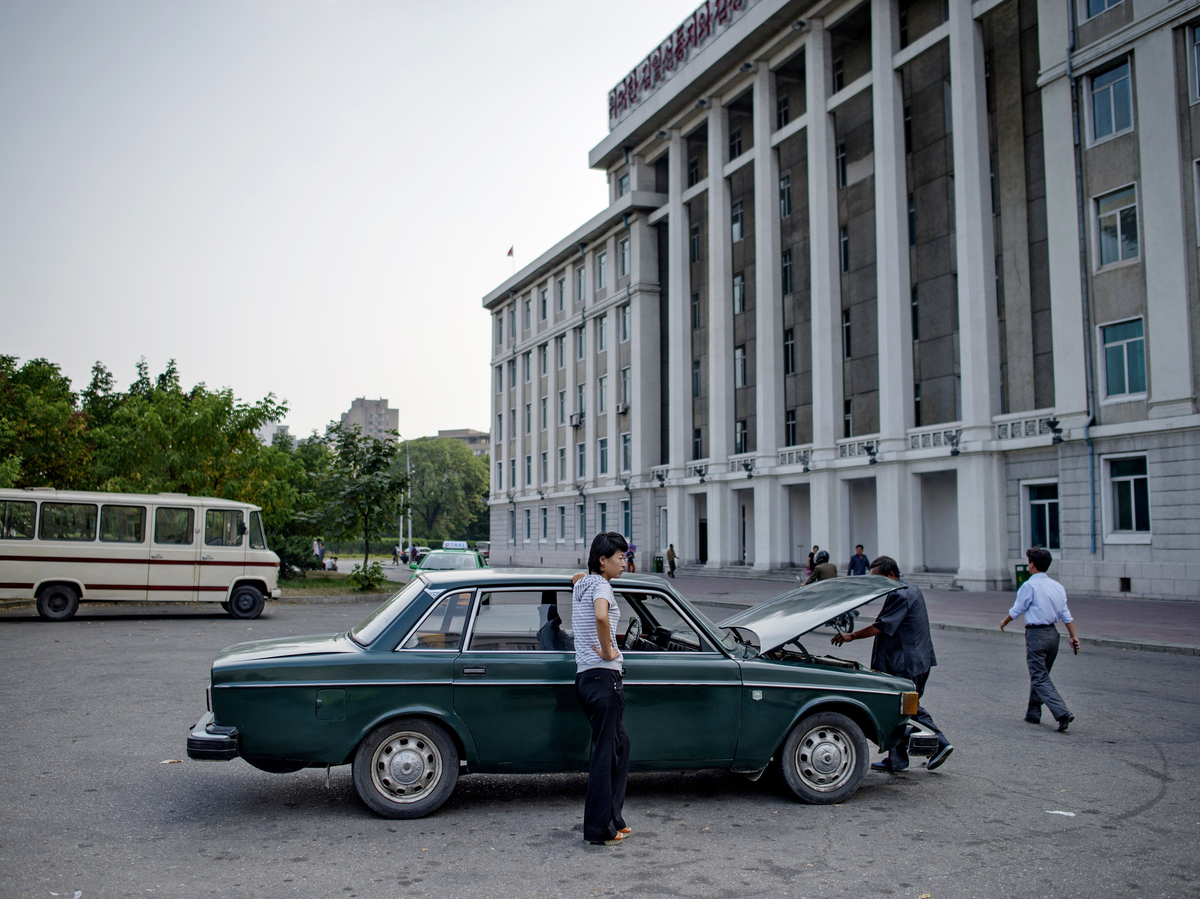 Shortly after he opened the embassy in Pyongyang, the country's trade with the West came to a sudden halt. North Korea wasn't paying for the goods it imported. Payment deadlines passed, debts and interest payments mounted, and it became clear that North Korea could not afford all its investments.

North Korea had overestimated its industrial capabilities, Cornell wrote in his 2002 memoir, North Korea Under Communism: Report of an Envoy to Paradise. The country was convinced it was catching up with the developed industrial nations. In Cornell's opinion, though, North Korea didn't know how to do business outside the Communist bloc. Its economy struggled.

Cornell says the factory equipment was left to rust away in North Korean warehouses. And more than four decades later, the government has yet to pay for those 1,000 Volvos.

According to the Swedish Export Credit Agency, which insured the payments, North Korea's debt to Sweden has grown over the years to a massive $322 million. Sweden still sends twice-yearly reminders to Pyongyang, but North Korea has never upheld its end of the agreement. 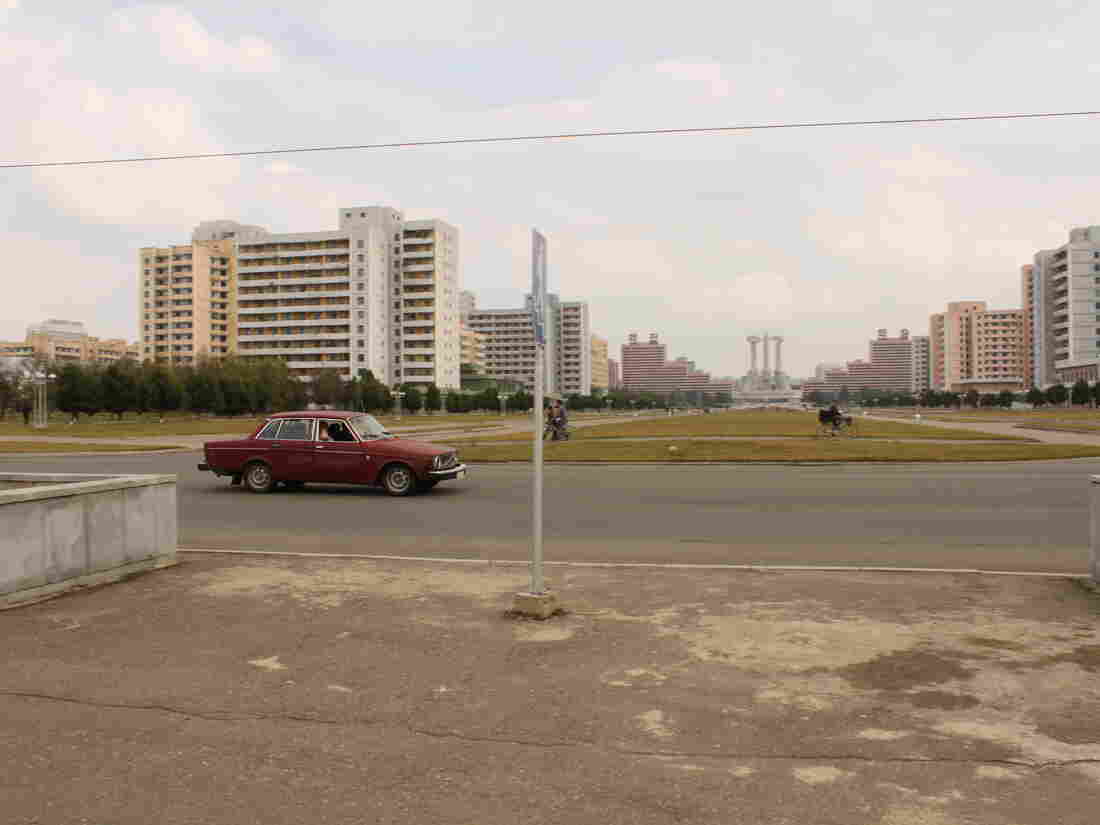 Scottish tourist Duncan Lang spotted a Volvo 144 during his trip to North Korea in October 2010. "I heard the car coming before I saw it," he tells NPR. Duncan Lang hide caption 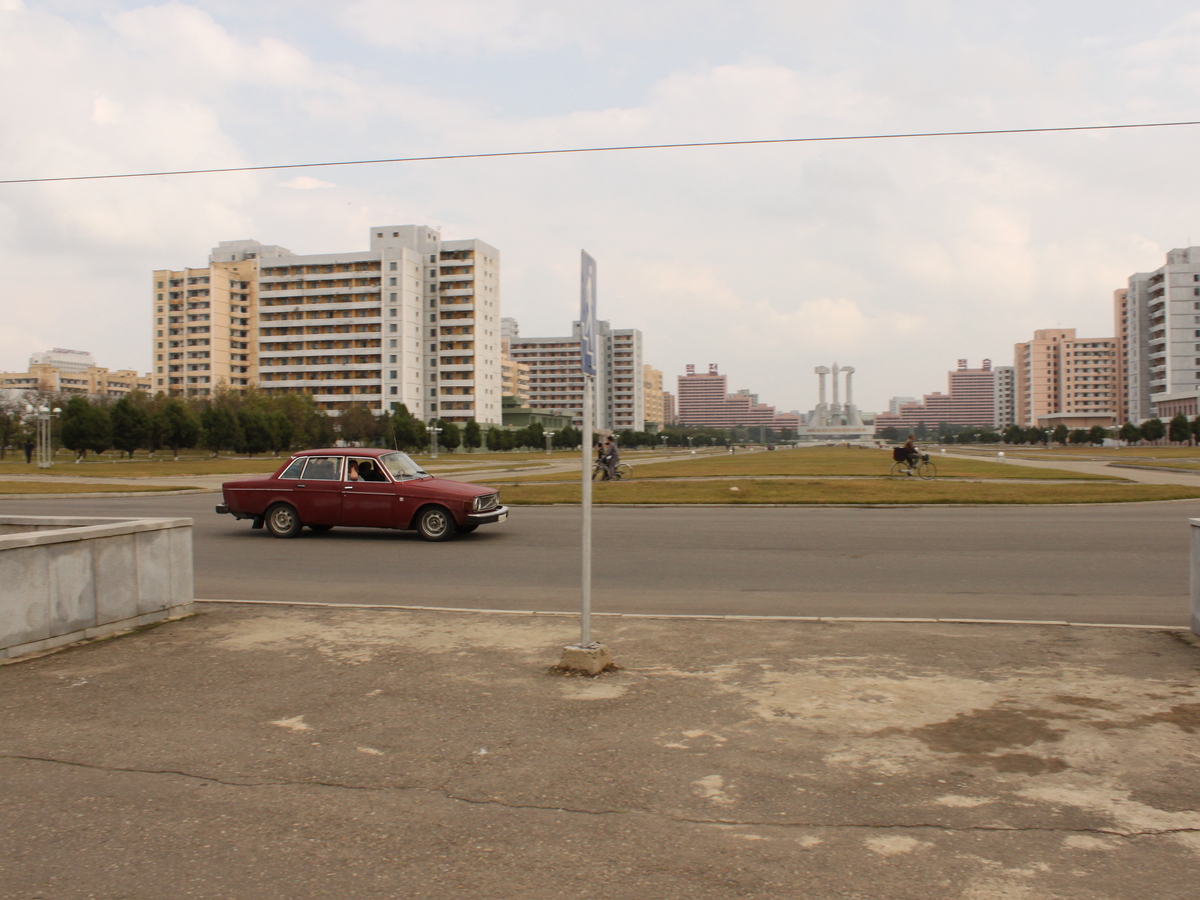 Scottish tourist Duncan Lang spotted a Volvo 144 during his trip to North Korea in October 2010. "I heard the car coming before I saw it," he tells NPR.

Protecting power for the United States

Perhaps a fleet of 1,000 unpaid Volvos is just a cost of diplomacy. By opening an embassy in Pyongyang, Cornell managed to establish some trust with North Korean leadership. Sweden still maintains its embassy in Pyongyang, and it has taken part in humanitarian aid work and expanded its role as intermediary between North Korea and the outside world.

"The Swedes are very good at this," says Pollack of the Brookings Institution. "The Swedes have often played that kind of a role in diplomacy of various kinds. They are seen, in some measure, as an honest broker."

After the attack on Pearl Harbor, Sweden acted as the protecting power for Japanese nationals in Hawaii during World War II. It has represented the United Kingdom as protecting power in Iran at times when diplomatic relations have been broken off.

In cases when an American is detained in North Korea, the Swedish Embassy in Pyongyang often steps in.

American journalist Laura Ling was detained in North Korea for 140 days in 2009. Ling and her colleague Euna Lee were apprehended while filming a documentary for Current TV along the China-North Korea border.

Weeks after their capture, the Swedish embassy set up a meeting with the two. Ling still remembers the moment Sweden's ambassador at the time, Mats Foyer, walked into the drab Pyongyang hotel room.

"I just lost it. I was really overcome by emotion because I knew that he was the one person in North Korea who was working on my behalf," Ling says. "He was my lifeline."

Because of the limited nature of the protective power role, Foyer was not responsible for negotiating the release of Ling and Lee. They returned to the United States after a meeting in Pyongyang between former President Bill Clinton and Kim Jong Il, who pardoned the two American women.

But during Foyer's visits, he was able to bring Ling medication, books and letters from home — which gave her hope for her future.