Accessibility links
'Fight For Rights Will Continue' In Zimbabwe, #ThisFlag Movement Pastor Vows : Parallels Robert Mugabe is gone as Zimbabwe's leader, but Evan Mawarire warns that abuses have yet to end. "The citizens of our nation are not enemies to our government," he says. "They should be listened to." 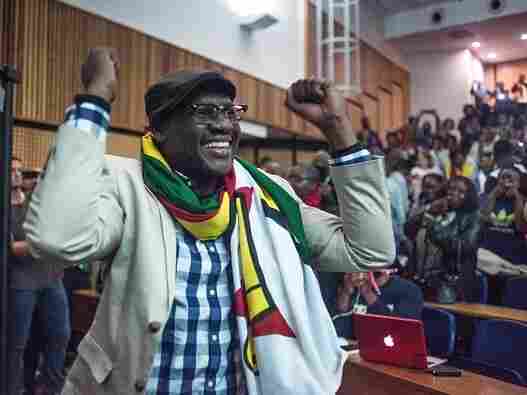 Zimbabwean Pastor Evan Mawarire, acquitted recently of trying to subvert the government, has deftly used social media in a quest for justice and rights. "It's important that we let the administration that is coming in right now know that if they do to us what Robert Mugabe's government did to us, we will do the same thing to them that we've done to Robert Mugabe," he recently told journalists. Mujahid Safodien/AFP/Getty Images hide caption 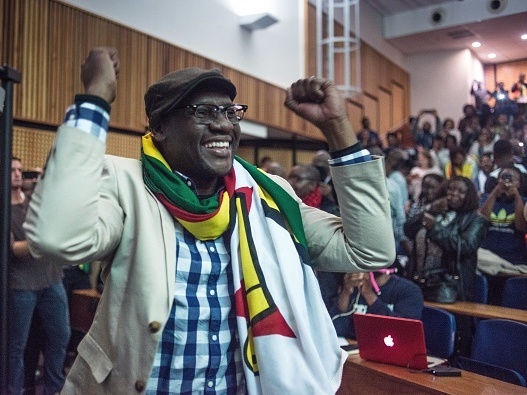 Zimbabwean Pastor Evan Mawarire, acquitted recently of trying to subvert the government, has deftly used social media in a quest for justice and rights. "It's important that we let the administration that is coming in right now know that if they do to us what Robert Mugabe's government did to us, we will do the same thing to them that we've done to Robert Mugabe," he recently told journalists.

Baptist Pastor Evan Mawarire is something of a cult figure in Zimbabwe. He's known for proudly wearing his country's national red, yellow, green, black and white flag around his neck. And Mawarire has deftly used social media to push his #ThisFlag hashtag campaign seeking social justice and constitutional rights, for which he's been hounded by security forces and jailed in the past.

One of his videos went viral. "ThisFlag," he says in the video, "every day that it flies, is begging for you to get involved, to say something, to cry out and say, 'Why must we be in this situation?' "

Mawarire's video sparked a movement. Thousands of protestors took to the streets of the capital Harare last year, demanding the departure of Robert Mugabe as president and accusing him of political misrule and economic mismanagement.

Mugabe was driven out partly by people power, after the military had taken over in what it called a "bloodless correction." That decisive move was preceded by Mugabe firing one of his vice-presidents, Emmerson Mnangagwa, a fellow veteran of the war of independence. The dismissal, widely seen as a prelude to Mugabe naming his own wife as vice-president, was a step too far for the army, which backs Mnangagwa — and the military stepped in.

With Mnangagwa as the new president, the pastor and other rights campaigners warn that their fight for rights will continue.

"It's important that we let the administration that is coming in right now know that if they do to us what Robert Mugabe's government did to us, we will do the same thing to them that we've done to Robert Mugabe," Mawarire told journalists.

He says even though Mugabe has been forced from power, that doesn't mean abuses in Zimbabwe have ended. He points in particular to missing rights activist Itai Dzamara, who disappeared in 2015 and has not been seen or heard from since he was forced into an unmarked vehicle on March 9 of that year.

"There still are many citizens right now who are in prison for political reasons, in terms of having stood up against the regime. And I urge this new government to drop those charges and let those people go, because they did not commit any crime at all," says Mawarire. "The citizens of our nation are not enemies to our government. They are allies in building a better Zimbabwe. They should be listened to."

In the bad old days, Mawarire and his supporters would have been chased off the streets of Harare with teargas and batons, and possibly arrested had they tried to hold a rally. The day after Mugabe resigned, though, the pastor and other clergymen and supporters held a gathering in Africa Unity Square, opposite Parliament and a street away from the High Court that acquitted him. Campaigners were telling anyone who'd listen that they must hold the new leadership to its pledges of change, unity and economic revival for Zimbabwe.

Last year, during a six-month exile in the U.S., Mawarire told NPR's Weekend All Things Considered he was surprised at how his #ThisFlag movement took off.

"It was the last thing on my mind that this would be a movement that makes a political statement," he said. "It really just started off as one video and then, after that, I said, 'Hey, if you want to reclaim your love for Zimbabwe, get a national flag, drape it around your neck or around yourself or get your family, hold it together, take a selfie, take a picture, post it on social media and let's just love Zimbabwe again.' "

Mawarire is adept at using social media to spread his message. Minutes after High Court Judge Priscilla Chigumba found him not guilty of trying to topple Mugabe's government, the pastor – who was still standing in the dock — whipped out his smartphone.

He posted a selfie on Twitter, telling his supporters what had just happened and urging them to keep up the fight and join hands to build a "better Zimbabwe."

The case was being viewed as a test of the independence of the judiciary under Zimbabwe's new president. Mawarire says Zimbabweans must take action and blame themselves for not speaking out enough.

He issued this clarion call to his compatriots: "We're going to encourage some of our citizens to prepare to run for elections in 2018. You're good candidates — why don't you run? And we want people to register to vote."

For years, the mantra from opponents of Zimbabwe's longtime leader was "Mugabe Must Go." Now that Mugabe has gone, what's the future for activists seeking change in the southern African nation?

Another campaigner, Linda Tsungirirai Masarira, who's been active in the influential Tajamuka protest movement, and spent time in prison and in solitary confinement last year, is campaigning to become an independent member of Parliament in elections due next year.

Zimbabwe's new leader has not included any opposition politicians in his new cabinet, despite calls for an inclusive, representative government. So, Masarira says, it's time for the younger generation to take the plunge.

"The reason that made me want to run for political office is that, sometimes, you have to take your activism from the streets, from the demonstrations, from the protests, to the august house where the decisions are made, where laws are made that will benefit the masses of Zimbabweans."

Masarira says she understands why jubilant Zimbabweans took to the streets to celebrate and fraternize with soldiers after the military takeover, and again after Mugabe's resignation, but she remains cautious about the armed forces and new president.

"I've got a lot of reservations in the new leadership. I'm yet to see if the new president, Emmerson Mnangagwa, is the real deal that Zimbabweans need," Masarira says. "I want to see whether he's truly reformed and if he's truly willing to take Zimbabwe forward and to confess for the wrongs that he's done, in the spirit of forgiveness, tolerance, truth and healing. We'd have to see it in action, not just in speech."

There's concern that Mnangagwa — once a loyal aide of Mugabe before he was fired as vice president last month — may not make good on his pledge to be a leader for all Zimbabweans in a new democracy.

"Give the incoming president wisdom to take this nation where it needs to go..." he prayed. "It's going to be a hard journey because many of us are divided but Lord, you've shown us how important it is to be united."