Accessibility links
Concern Grows In Pakistan Over Cases Of Disappearance : Parallels The Human Rights Commission of Pakistan counted more than 700 alleged disappearances last year. Since 2001, the group estimates that as many as 10,000 people have gone missing. 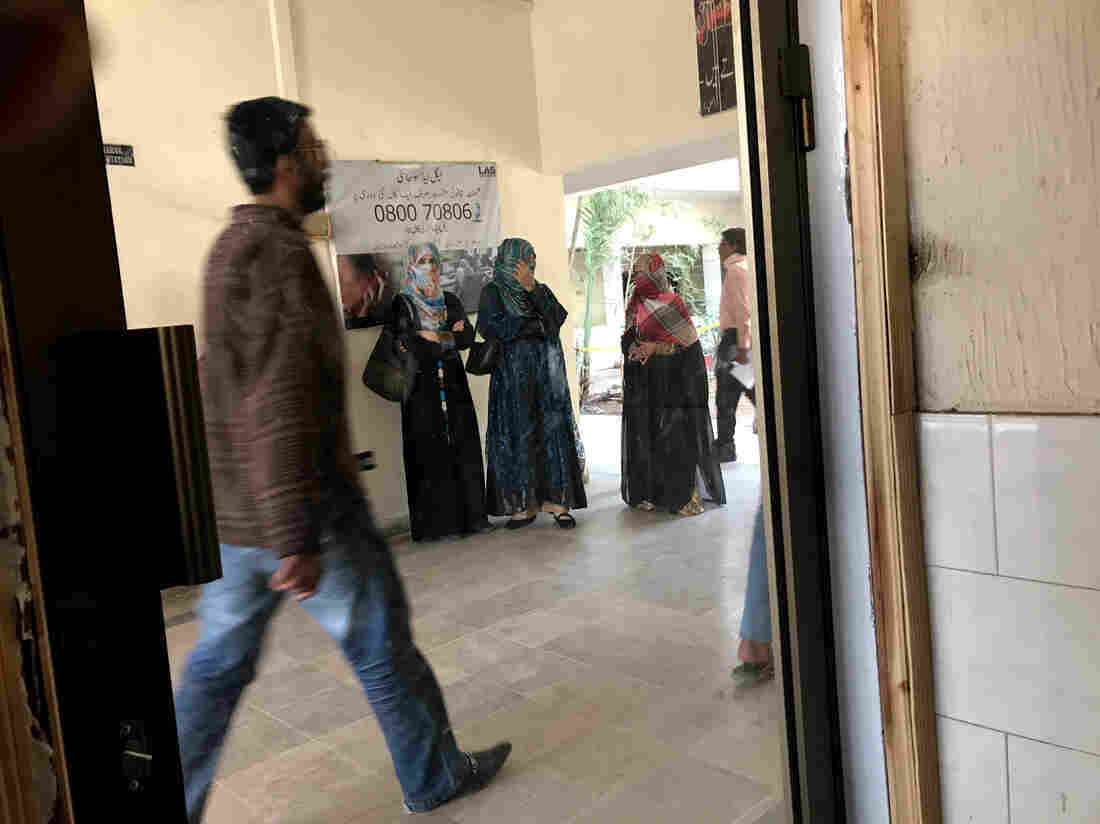 Friends of Nawaz Atta, a missing activist, accompany his mother at a police station to report the man's disappearance. Atta was taken by armed men in late October. Diaa Hadid/NPR hide caption 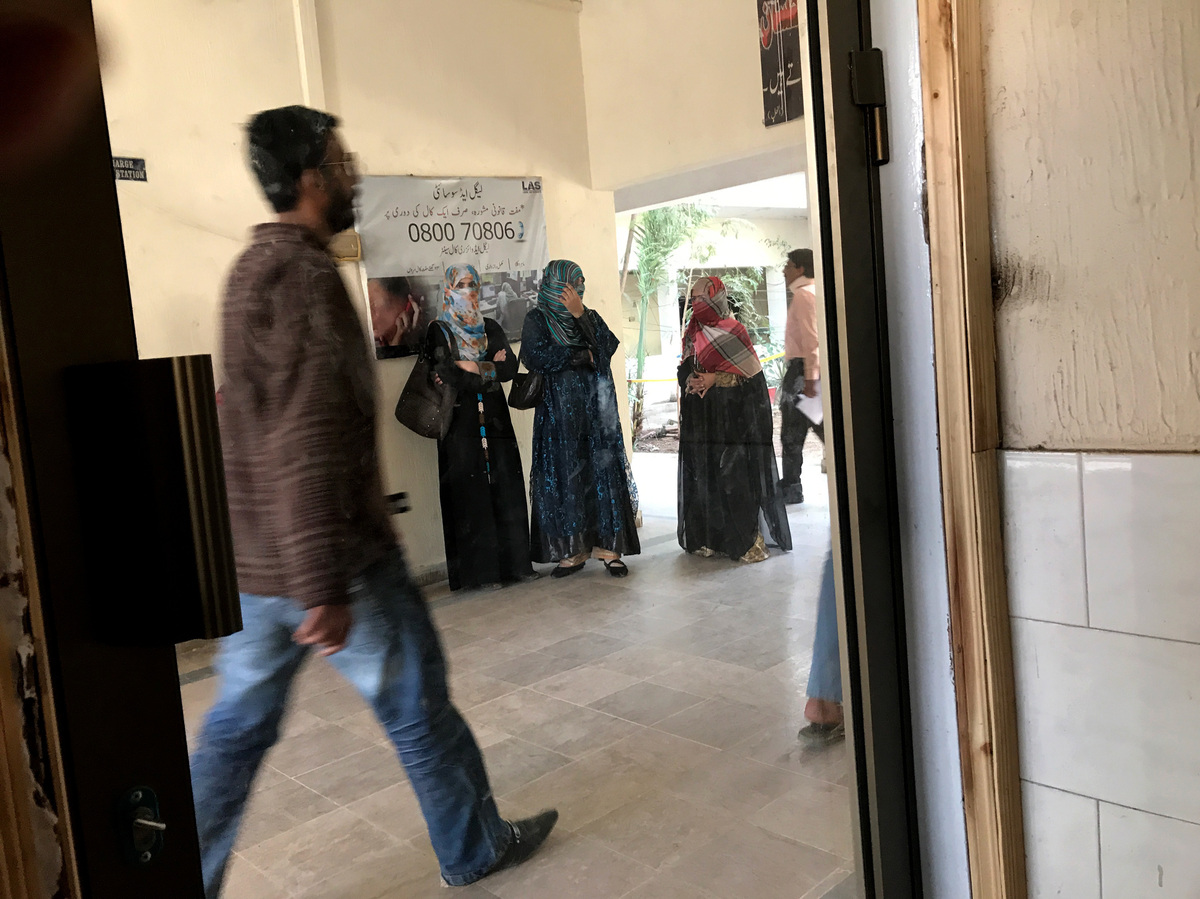 Friends of Nawaz Atta, a missing activist, accompany his mother at a police station to report the man's disappearance. Atta was taken by armed men in late October.

For one Pakistani mother, sunburn signals her desperation to find her son.

Zarjan Atta rode rickshaws and buses for four days on desert roads, deepening and reddening her brown skin, as she traveled from her village to Karachi, Pakistan's southern port mega-city.

That's where her son Nawaz, 23, was living with relatives and studying at Karachi University. Her relatives say armed men dragged him from their flat on Oct. 28. They were in civilian clothes.

They pushed the women and children into a room. They warned: If you speak, you'll be next.

The Human Rights Commission of Pakistan counted 728 alleged disappearances last year. Since 2001, the group estimates that up to 10,000 people have gone missing, with nearly 3,000 still unaccounted for. And this, says Zohra Yusuf, a commission board member, is a conservative estimate.

Other organizations present wildly different numbers. Most conservatively, the government-run commission of inquiry into missing persons says 1,498 people are unaccounted for. Activists say many families of missing persons do not approach the commission.

Some families fear coming forward, and Yusuf says she can't blame them. It is rare for the police to issue missing persons reports, she says. Usually that happens only when a rights activist or journalist is present. 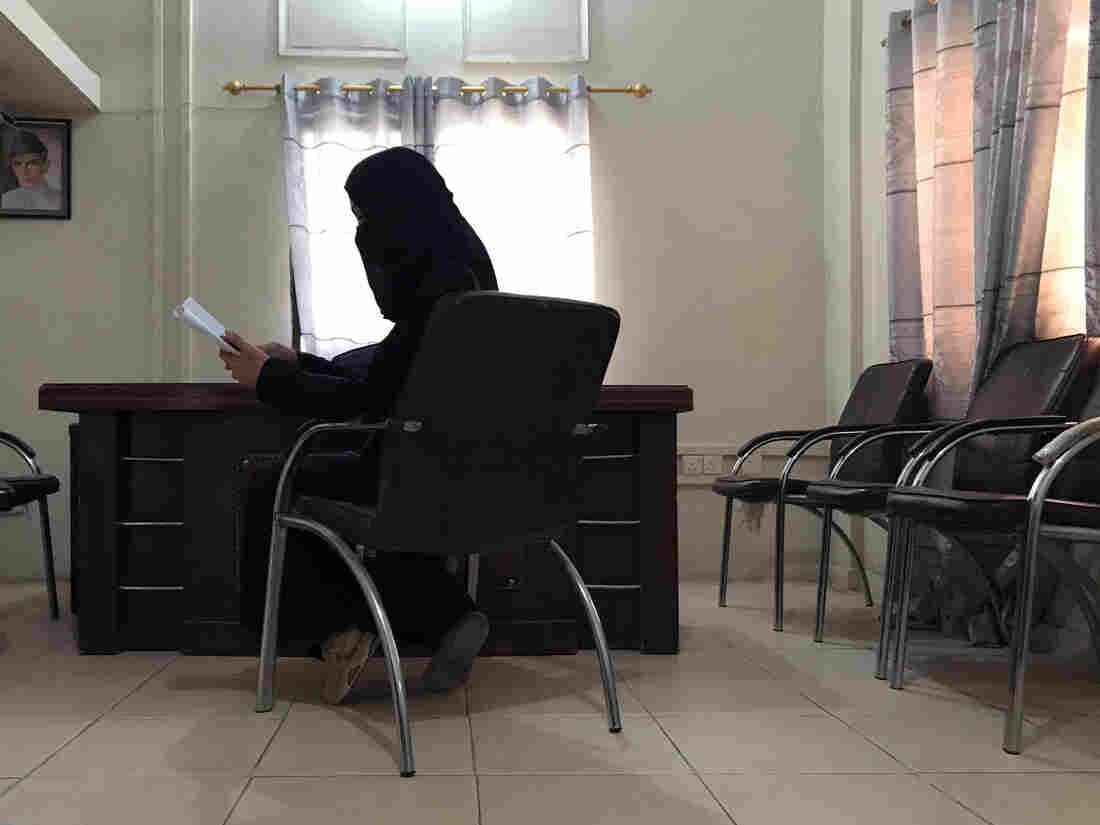 A friend of Nawaz Atta waits in a police station in Karachi to report his disappearance. She covers her face to avoid being identified. Diaa Hadid/NPR hide caption 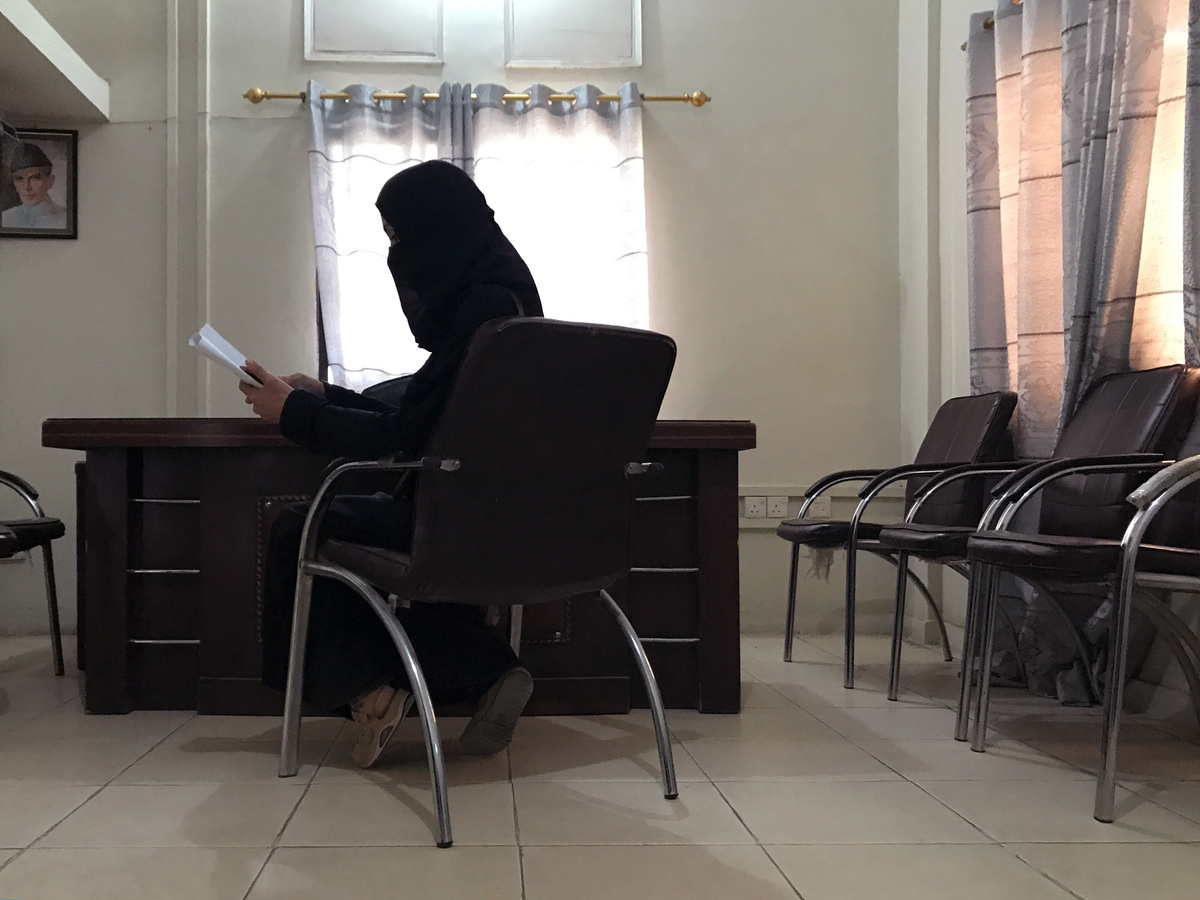 A friend of Nawaz Atta waits in a police station in Karachi to report his disappearance. She covers her face to avoid being identified.

Farhatullah Babar, a senator who advocates on behalf of the missing, says the military has continuously disappeared Pakistanis since it joined the U.S. in fighting al-Qaida after the terrorist attacks of Sept. 11, 2001. At first, suspected al-Qaida militants and insurgents from Balochistan – a province where the army is battling separatists — were targeted. But the targets, he says, have expanded.

A fifth man, Samar Abbas, who advocated for Pakistan's Shiite minority, was also taken at the same time. He remains missing.

The most recent known case of disappearance involves Raza Khan, 40, who advocated for peace between India and Pakistan. Local media reported that a man took Khan from his home in Lahore on Dec. 2. His brother said the abduction came after Khan engaged in a heated political discussion at a public event.

It is these sorts of cases that have prompted increased worry about who is being taken, and why.

Nawaz Atta had been documenting cases of disappeared people from Balochistan, a province bordering Iran and Afghanistan and roiled by a years-long separatist insurgency, before he was picked up. Atta did that work in his capacity as the information secretary for a group called the Baloch Human Rights Organization.

His friends say he was not involved in violence and was not an insurgent.

An army spokesman did not respond to NPR's repeated requests for comment.

Retired Brig. Haris Nawaz, who often provides insight into the military's thinking for journalists, says no Pakistani should ever criticize the army, which is under pressure to end the insurgency in Balochistan.

China is building a trade corridor through the province to the Arabian Sea. The corridor could transform Pakistan – but "unless Balochistan is peaceful," the brigadier says, "our effort will never be successful."

The stakes are exceptionally high. "I would say this is very defining moment of Pakistan," he says. "We are economically weak and this is our road to economic prosperity."

Even reporting on the disappeared can carry deadly risk. In 2011, a Human Rights Commission researcher investigating disappearances in Balochistan went missing.

"His tortured body was found about seven or eight months later," the commission's Yusuf says.

For many who are freed, there is fear in speaking out.

"Because if they go missing again, they will not be able to speak – forever," says Aasim Saeed, one of the bloggers released in January.

Saeed, 36, now lives in London. Since he is outside the country, he feels able to speak about what happened.

It began with a knock at the door, he says.

Men in civilian clothes pushed him into a car. They blindfolded and shackled him. In a detention center, he was interrogated about his Facebook page that mocked the army.

They wanted to know if Pakistan's rival, India, paid him. He told them no.

Blindfolded, he was whipped "with a leather strap or something." He fell. Somebody held his neck between his legs. The whipping continued.

His ordeal ended when he wrote an apology letter. He was freed and fled to the U.K., where he has applied for asylum.

Zarjan Atta's ordeal to find her son continues with a police report.

It's been a year since she last saw Nawaz. She's an illiterate sheepherder, a widowed mother of five, and had no money to visit him in Karachi. Any money she scraped away, she sent to her son to pay for his education. She was waiting for him to finish.

"I wanted my son to help his brothers get an education," she cries, "and make my life easy."

After she arrives in Karachi, she meets Nawaz's activist friends – all women. They ask not to be identified by NPR for fear of being detained themselves.

Atta is a slight, shy woman, and they offer to help. They adjust their colorful scarves to cover their faces as they barrel down a road to a police station.

They have come prepared with a typed-out note saying what happened to Nawaz, to avoid speaking and drawing attention to themselves.

One of the women tells me that obtaining a police report is the first step to verifying that Nawaz Atta has been taken. They can use a police report to file court cases demanding his return and to verify to human rights groups that Nawaz is missing, so the groups can advocate on his behalf.

At the Gulistan-e-Johar station, the women give a policeman their statement accusing members of a paramilitary unit of seizing Nawaz.

He stares silently at the paper.

He tells the women he can't write a report because they are in the wrong jurisdiction.

He directs them to the nearby King Faisal Street station.

When an officer there hears that Nawaz is a Baloch activist who advocates for missing Baloch people, he berates the women, asking them what they expected.

The women insist on a response. They are told to wait.

They wait for hours.

The station officer arrives. He says the area where the alleged disappearance took place could be in three different jurisdictions, and tries to send them away to another police station.

The women insist again, and finally he agrees to send an investigator to check if the incident occurred in his jurisdiction.

The investigator reaches the dusty neighborhood where Nawaz Atta lived. He asks residents if they saw anything. A shopkeeper says nothing happened here – and one of the women with Zarjan Atta, Nawaz's mother, shames him until finally he says, yes, he saw armed men take Nawaz.

The women return to the station. It's nightfall. Zarjan Atta is exhausted.

She vowed to God that she'd fast until her son returned.

Finally, another cop writes up a report. Atta inks it with her thumb.

Her son is officially missing.