Accessibility links
Austrian Muslims Say Religious Intolerance Is Growing : Parallels Austria adopted a face-veil ban in recent months and is seeing a rise of vandalism at Muslim businesses and mosques. The new Austrian government denies it is ostracizing Muslims. 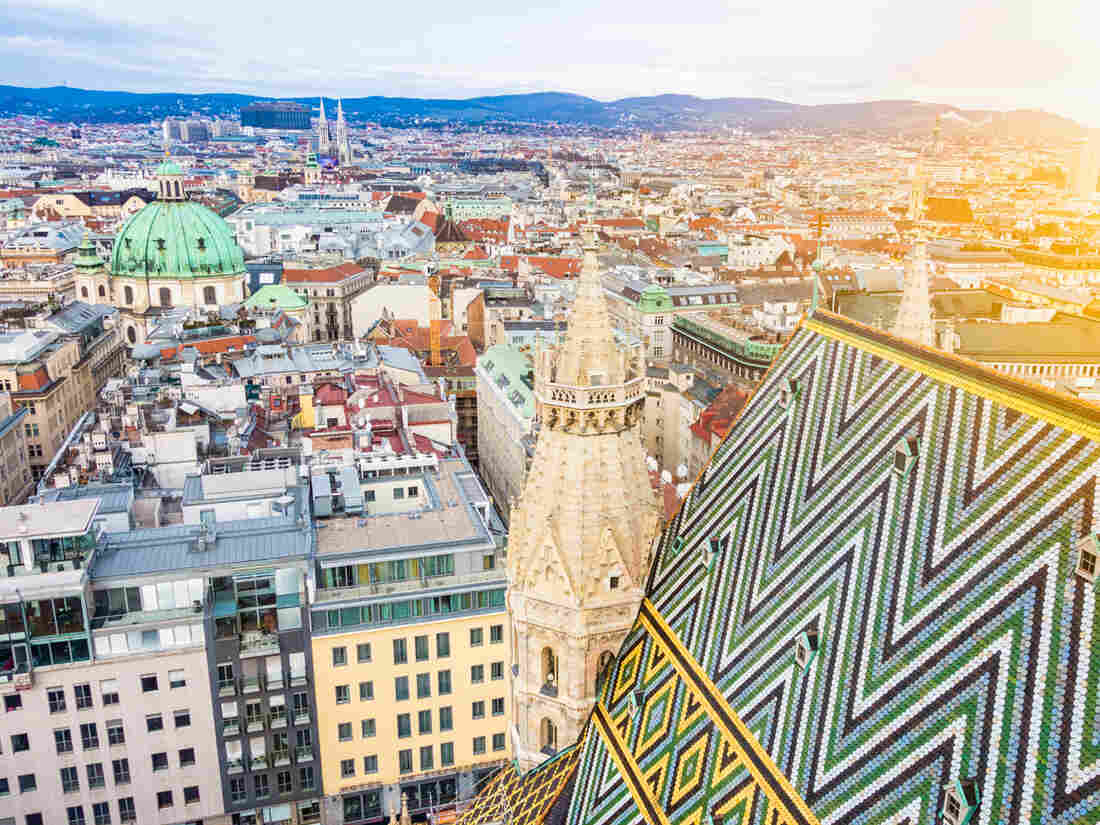 Aerial view over the rooftops of Vienna from the south tower of St. Stephen's Cathedral. Many Muslims say tensions are rising in Vienna. bluejayphoto/Getty Images/iStockphoto hide caption 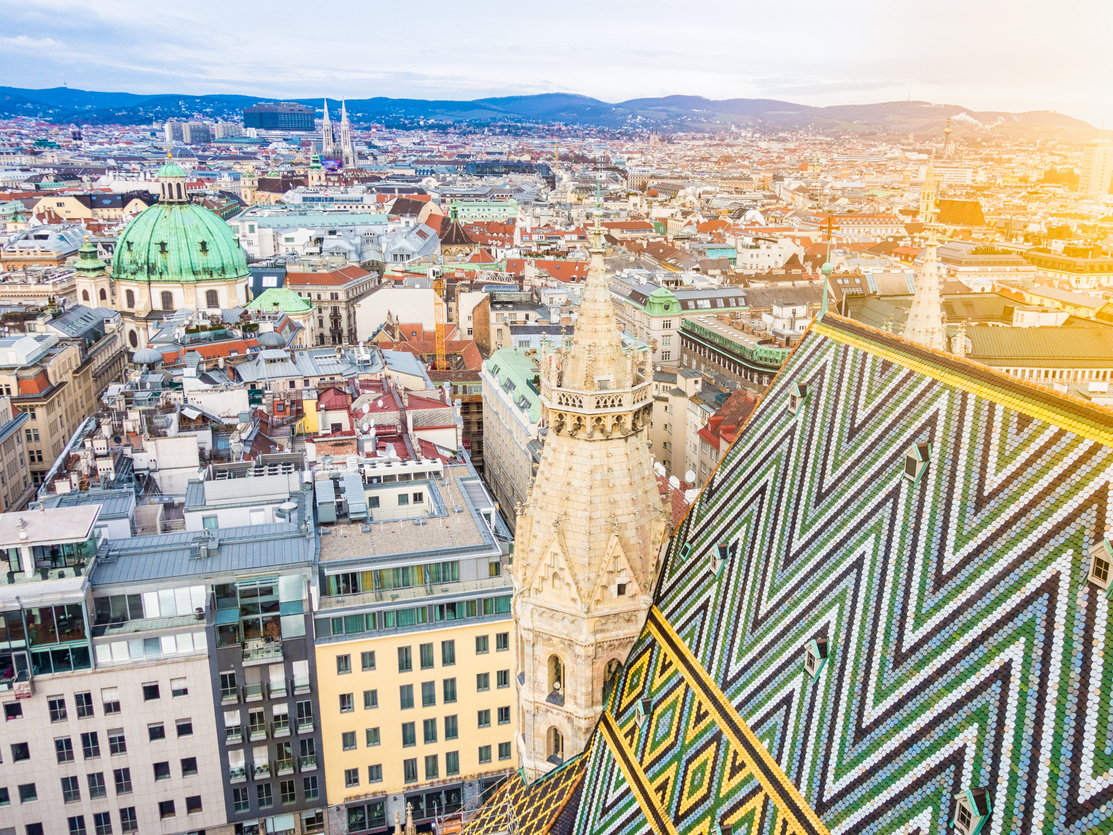 Aerial view over the rooftops of Vienna from the south tower of St. Stephen's Cathedral. Many Muslims say tensions are rising in Vienna.

Across the street from Vienna's iconic Ferris wheel, the Schura Mosque is packed each Friday with Muslims who come to pray.

It's one of some 300 mosques and prayer rooms serving 700,000 Muslims who live in Austria and who've enjoyed the same rights as Christians and Jews since Islam was made an official religion there in 1912.

A few mosques, like Vienna's Islamic Center, even have a minaret. But they are silent these days, a metaphor of sorts for the low profile many Muslims are keeping because they no longer feel welcome in Austria. One of the worshipers at Schura Mosque on a recent Friday was Viennese Councilman Omar al-Rawi. He said Muslim asylum-seekers are especially afraid to enter mosques nowadays.

"They say, 'We won't go to pray because maybe they will think we are radicals so it's better not to pray'" until their refugee status is approved, he explains.

Much of the Muslim discomfort in Austria is linked to its new government that was sworn on Dec. 18. One of its factions is the far-right Freedom Party, which has Nazi roots and which has joined its bigger partner — the center-right People's Party — in taking a hard line against Muslims. Critics charge that even before they took office, these parties changed the political discourse in Austria by playing on people's fears. A majority of voters embraced their message of keeping Austria safe from terror attacks carried out by Muslim extremists elsewhere in Europe, as well as curbing asylum and immigration.

"These factors stir up uneasiness and fears and makes the Muslim to be seen as 'the other,'" says Carla Amina Baghajati, 51, who is spokeswoman for the Islamic Religious Community in Austria. That "other," she adds, is perceived as a threat to the Austrian norms. 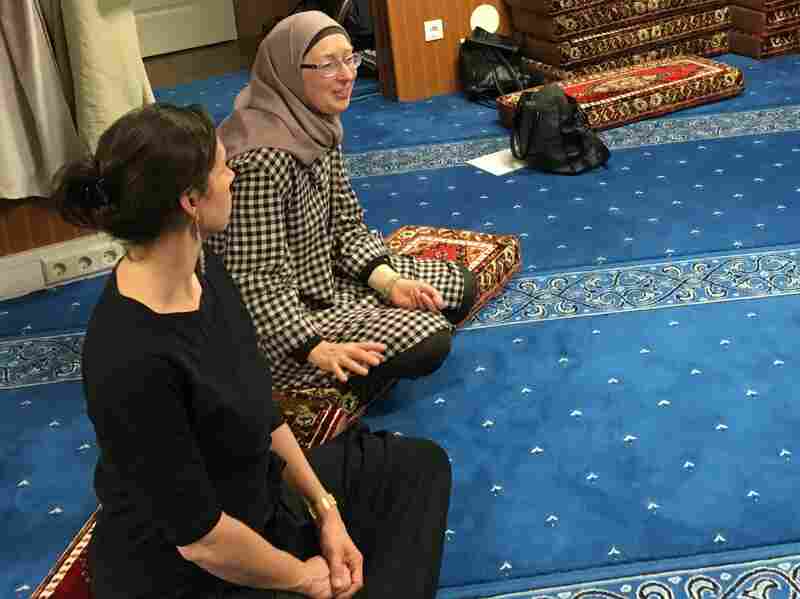 Carla Amina Baghajati (to the rear of the photo), 51, is a German native living in Austria and the spokeswoman for the Islamic Religious Community in Austria. Here she's heading a Dec. 6 workshop for Austrian kindergarten teacher trainees on dealing with Muslim students and colleagues. Soraya Sarhaddi Nelson/NPR hide caption 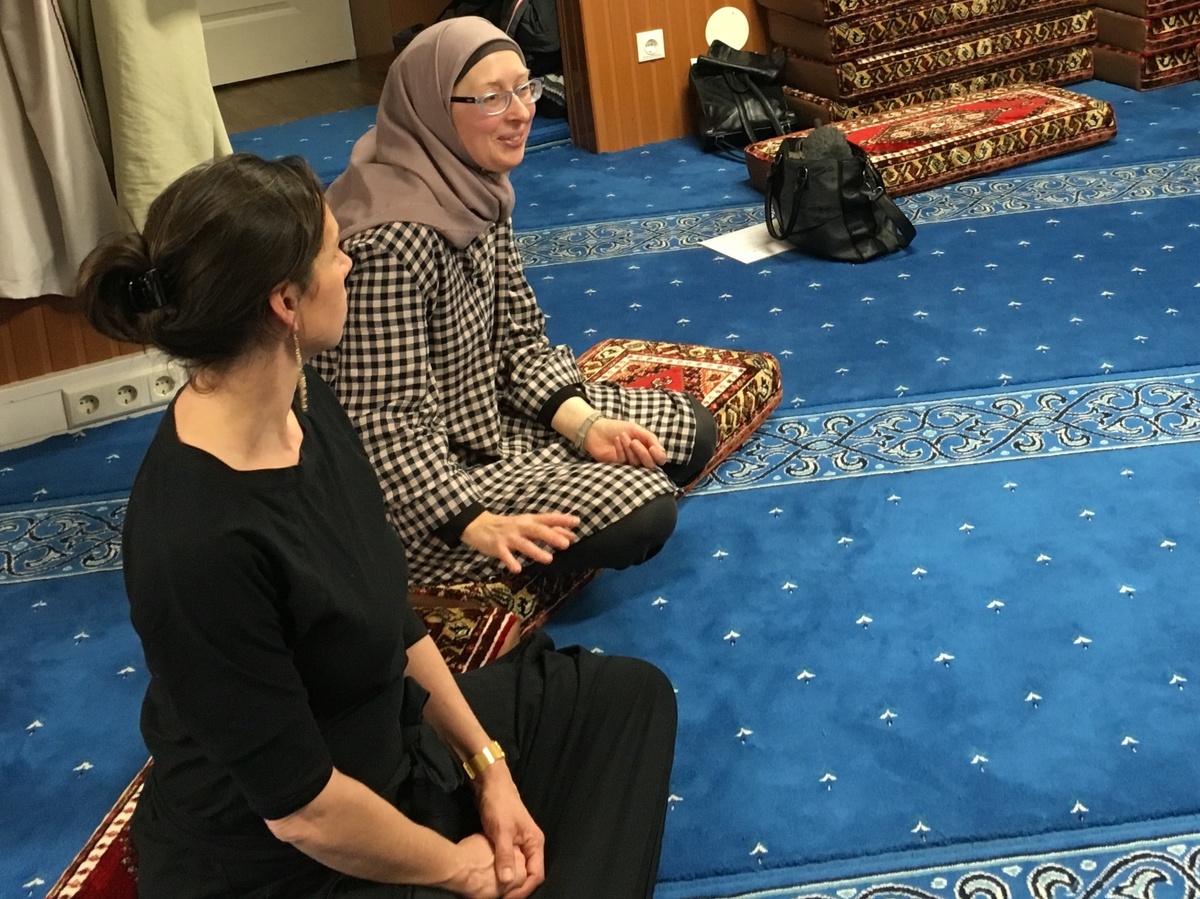 Carla Amina Baghajati (to the rear of the photo), 51, is a German native living in Austria and the spokeswoman for the Islamic Religious Community in Austria. Here she's heading a Dec. 6 workshop for Austrian kindergarten teacher trainees on dealing with Muslim students and colleagues.

In recent months, Austria adopted a face-veil ban and, a couple of years before that, banned Islamic institutions from raising funds abroad, even though no such prohibition exists on Christian or Jewish institutions. Baghajati says even the new chancellor, Sebastian Kurz, who used to play an active role in bringing Muslims and the government closer when he was integration minister in 2011, is now distancing himself and no longer attends Islamic holiday events.

Farid Hafez, an Austrian author and researcher in the department of sociology and political science at the University of Salzburg, predicted that life will be worse for Muslims now than the last time this governing coalition was in power in Austria from 2000-2005. That's because the Freedom Party has changed its "scapegoat from the Jew to the Muslim," he explains.

During its first term, the far-right group was accused of anti-Semitism and the European Union issued diplomatic sanctions against the Austrian government for a short time over its inclusion of the Freedom Party. But the leadership changed and the nationalist faction began forging a closer relationship with Israeli hardliners. Today, the party even has a Jewish parliamentarian.

For its part, the new Austrian government denies it is ostracizing Muslims. Among its stated goals are to improve security in Austria and better integrate refugees and other immigrants who already live there. For example, Herwig Mahr, a regional lawmaker for the Freedom Party in Upper Austria, is pushing for a German-language-only rule for students while they are at school, even during recess. He said if students don't learn German, they can't function well in Austrian society or at work.

"We have the problem that, in some areas, some 84 percent of the people are not native German speakers," Mahr explains, adding that politicians there are fighting against the creation of a "ghetto education" where children don't learn German properly. "It's a given that if I were to enter a mosque, I would take off my shoes like everyone else. So I expect young people who come to us to adopt our customs as well," he says.

But Hafez says defining Austrian norms that way fails to recognize that the society here is diverse.

"Whenever people say you have to integrate, the question is integrate into what?" he explains. "This is a part of the racist game. It's not really about the reality that is going on in our everyday life, but it's very much a racist discourse that is used to keep people outside [and] from having the same rights." 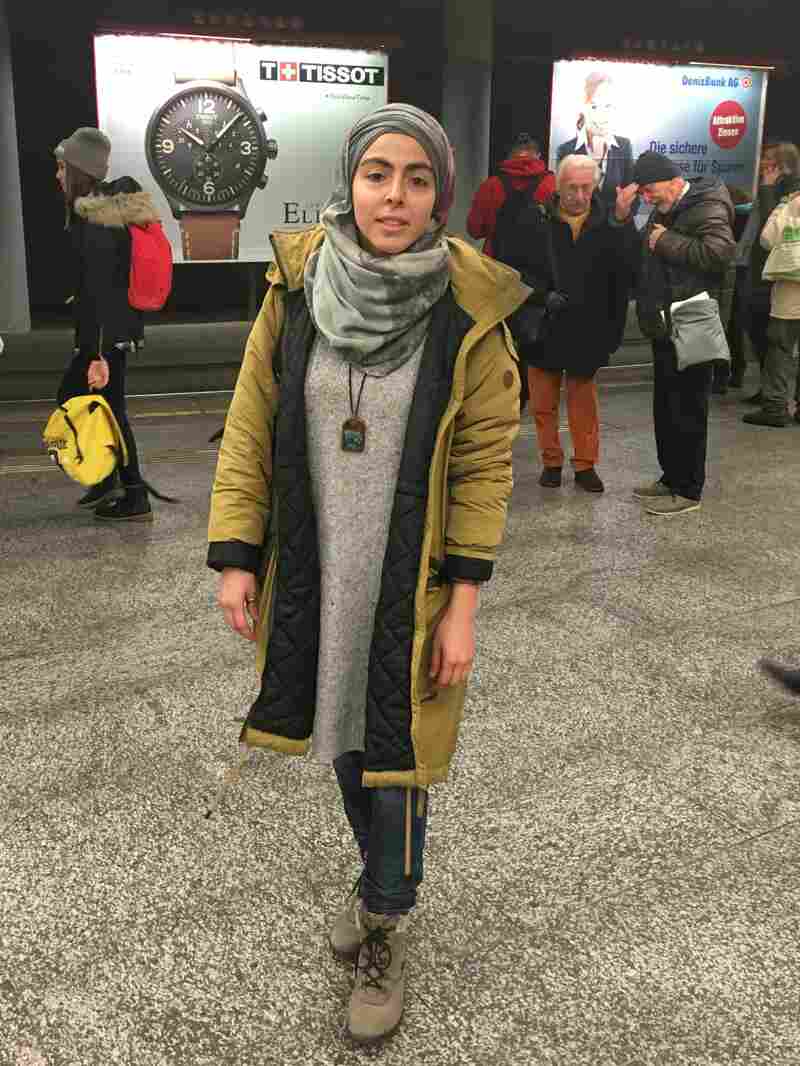 Elif Ozturk, 28, is a cultural anthropologist and Berlin native who has lived in Vienna for nearly a decade. She was accosted twice in the past 14 months on Viennese street cars by fellow female passengers who were offended by her veil. Soraya Sarhaddi Nelson/NPR hide caption 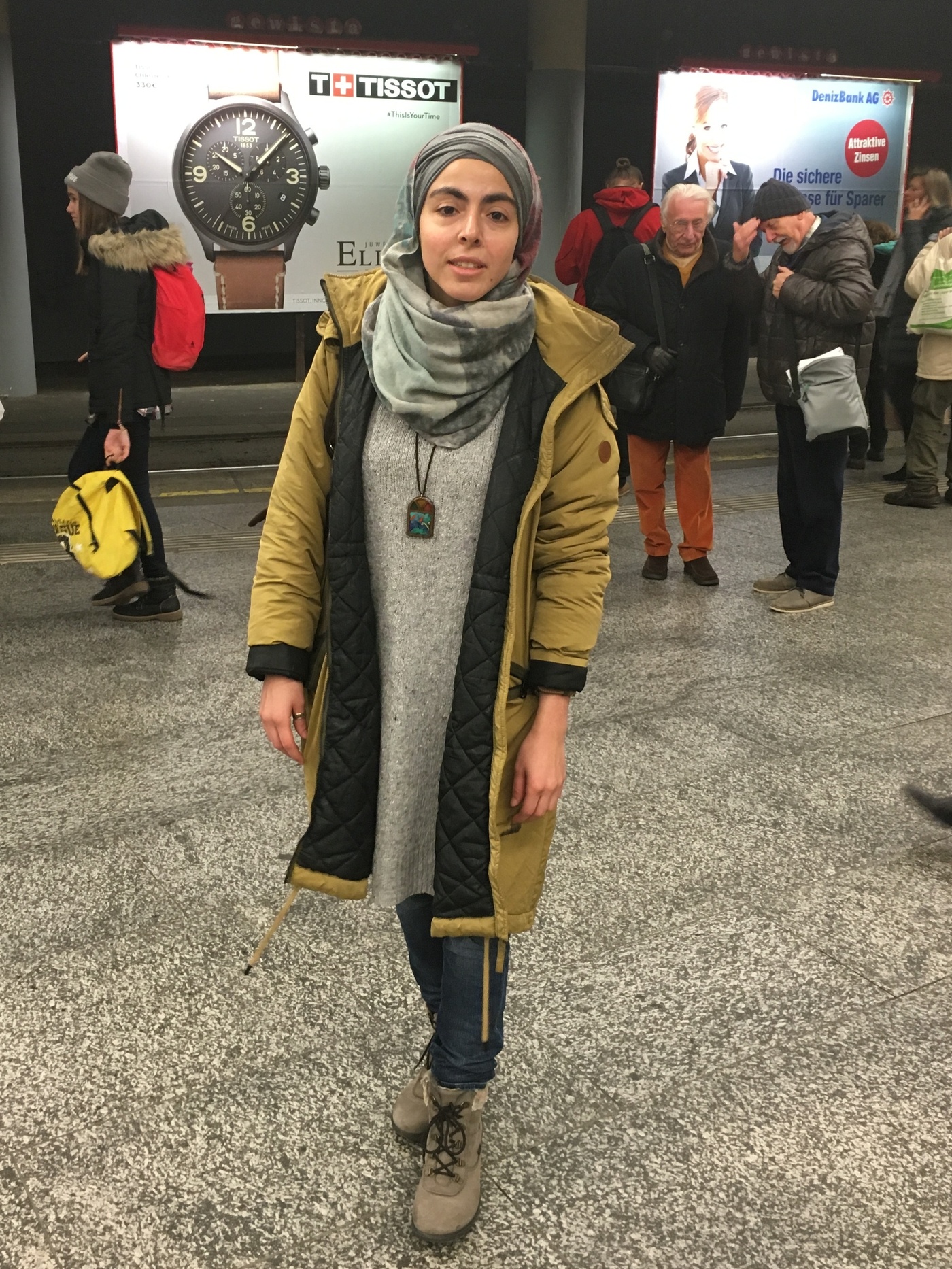 Elif Ozturk, 28, is a cultural anthropologist and Berlin native who has lived in Vienna for nearly a decade. She was accosted twice in the past 14 months on Viennese street cars by fellow female passengers who were offended by her veil.

He and other Muslim critics say the harsh discourse is emboldening the public to lash out at them, which happened to Elif Ozturk twice in the past 14 months while she was on a street car in downtown Vienna. The 28-year-old Berlin native and cultural anthropologist, who wears a headscarf and who has lived in Vienna for the past decade, says the first incident happened when she accidentally bumped into a fellow female passenger.

"She first said: 'You're not allowed to touch me.' I said: 'I wasn't touching you, I was just taking [out] my phone.' And then she started mentioning my veil and my identity of being Muslim and that I will bomb myself," like a suicide attacker, she recalls.

Ozturk says the woman then ordered her to get off the street car and when she refused, punched her. She says the attack stopped when other passengers intervened. She says she filed a police report, but nothing came of it. Her Dokustelle group has been tracking verbal and physical abuse of Muslims in Austria, which between 2015 and 2016 — the most recent year for which statistics were available — rose 62 percent to 253 incidents.

"I know from people — especially elderly people — that they really have big problems of dealing with it because they don't know what's going on, they have that feeling of powerlessness," Ozturk says.

Muslim leaders in Vienna say there are other problems as well, including vandalism at Muslim businesses and mosques.

Even so, the anti-Muslim rants don't stop, Rawi says. He recalls a recent parliamentary session in which a Freedom Party member was speaking out against funding for youth centers, claiming they were heavily used by Muslims.

"And, he says, 'Look who goes there' and he starts then naming all Muslim names that are attending these [youth centers]. He said, 'You will see. There will be a Fatima, and a Hassan and Hussein and Ahmad' and I don't know, many names," Rawi recalls.

Rawi says his country's Nazi past should serve as a reminder that he and other Austrians must act to stop the current situation from getting worse.