Accessibility links
Kidnapped, Abandoned Children Turn Up At Mosul Orphanage As ISIS Battle Ends : Parallels An orphanage in the Iraqi city of Mosul is caring for confused and unidentified children left in the wake of ISIS. 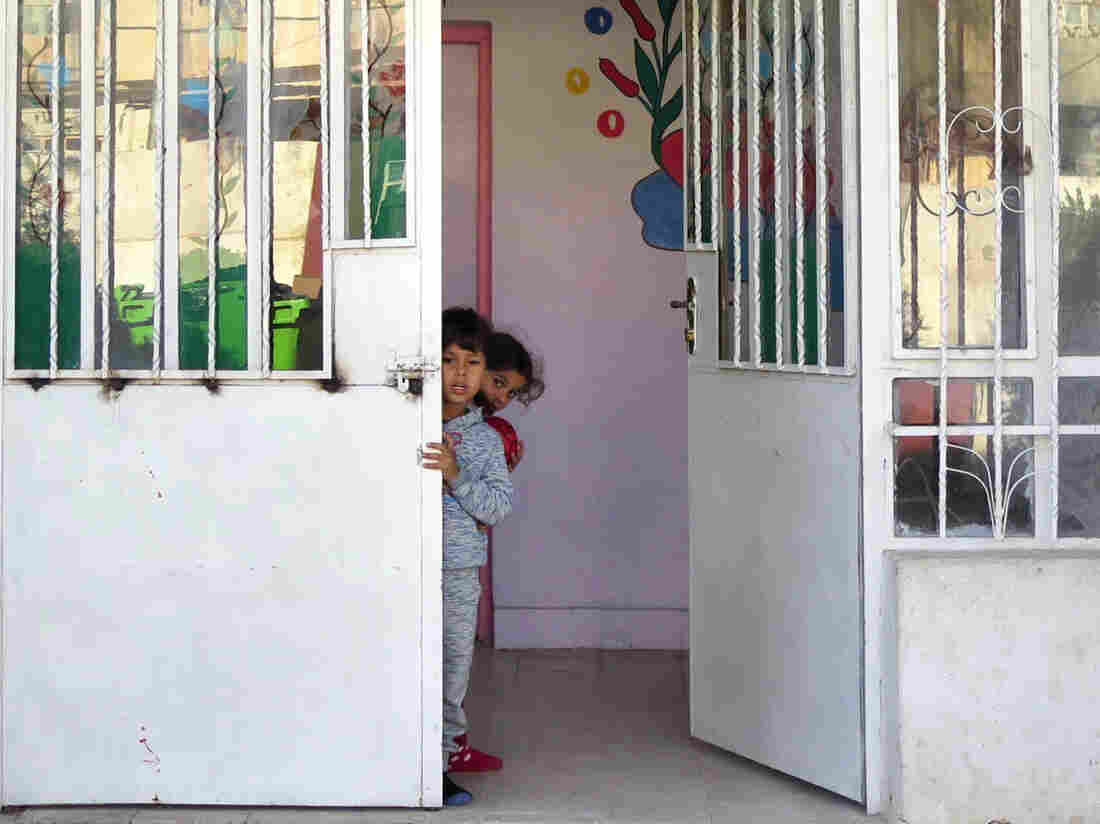 This particular Mosul orphanage holds 18 children under the age of 6, some of them the abandoned children of Yazidi women kidnapped by Islamic State fighters. Jane Arraf/NPR hide caption 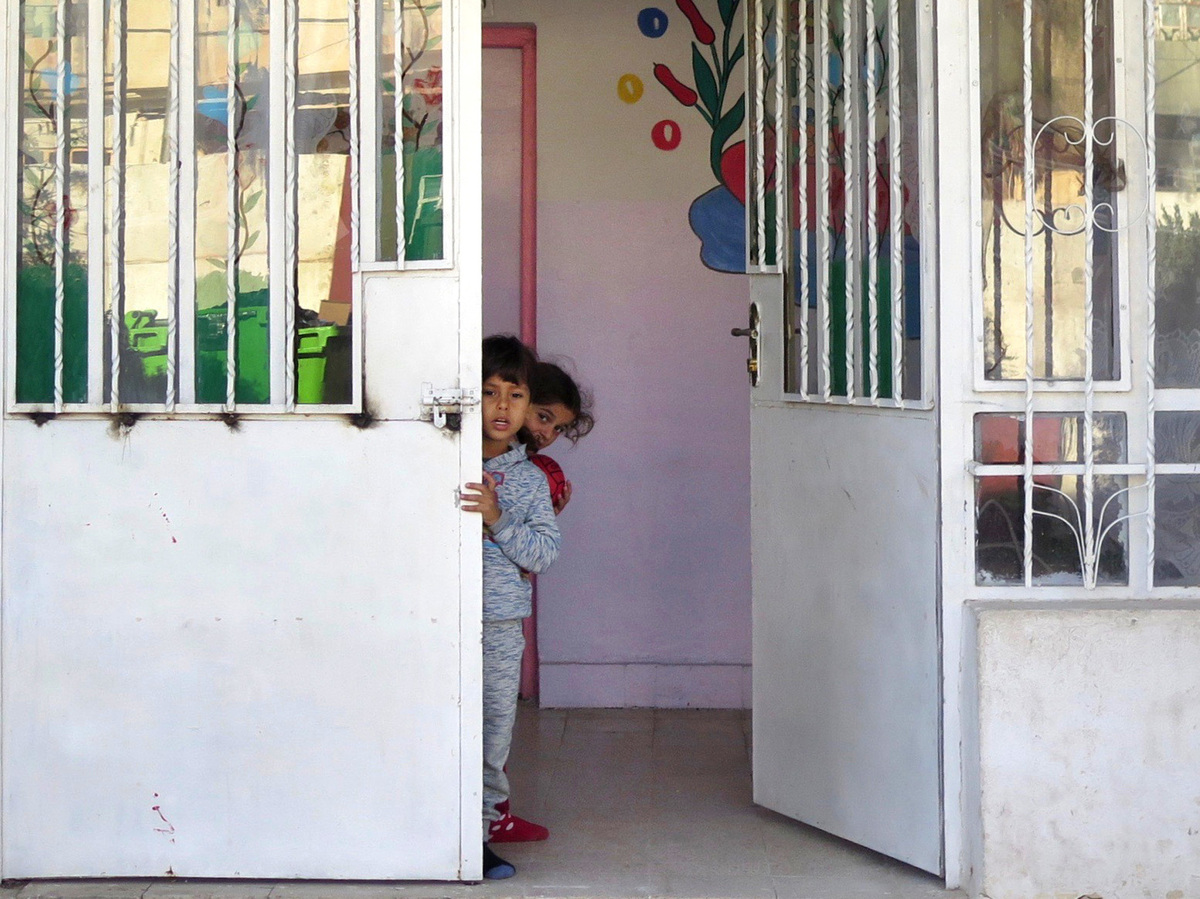 This particular Mosul orphanage holds 18 children under the age of 6, some of them the abandoned children of Yazidi women kidnapped by Islamic State fighters.

Hammoudi laughs and gurgles as a cooing caregiver picks him up from a crib. It's clear from the attention he is getting that he's the darling of the orphanage.

The 7-month-old baby is dressed in a white jumpsuit. One sleeve hangs empty where he is missing an arm.

Sukaina Ali Younis, the founder of this Mosul, Iraq, orphanage, describes what happened to him as one of the "biggest crimes of ISIS."

"ISIS left him on the ground as bait to lure Iraqi soldiers," she says. "Three soldiers went to rescue the child and a sniper shot and killed them all."

The Iraqi army sent in a tank, but before it could get to the baby, a dog ran up and dragged him away by the arm. When they rescued the baby boy, his arm had to be amputated.

The orphanage in a residential neighborhood in Mosul currently holds 18 children under the age of 6. Wooden cribs are lined end to end along bare walls in one of the rooms. A bassinet with white netting holds a baby only a few weeks old. He was left in the street near a police station in Mosul and brought by security forces to the orphanage.

There are some children whose entire families were killed in the war against the self-declared Islamic State — many buried in the rubble of crowded west Mosul when houses collapsed in bombings, airstrikes or mortar attacks.

One little girl was the only survivor when her mother gathered together her and her four brothers and detonated a suicide explosive belt in front of them. The little girl still has shrapnel in her leg. Younis named her Farah — happy. "Maybe after all this she will be happy in her life," she says.

Like the baby Hammoudi, there are others whose parents are unknown. 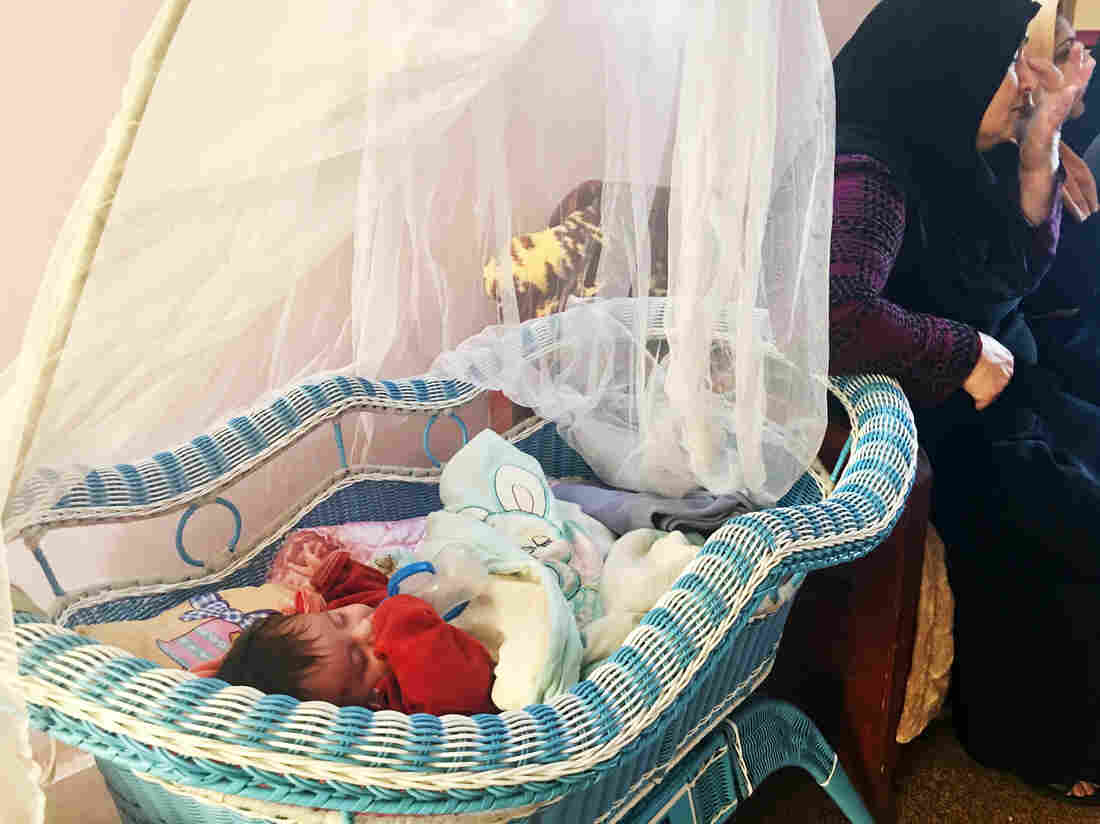 A 7-month-old injured after ISIS placed him in the street to use in an attack on Iraqi soldiers. Caregivers at the orphanage, to which NPR was given exclusive access, named him Hammoudi. His parents are unknown. He's one of the young children at a new orphanage in Mosul. The others are either orphaned, abandoned or rescued from kidnappers. Jane Arraf/NPR hide caption 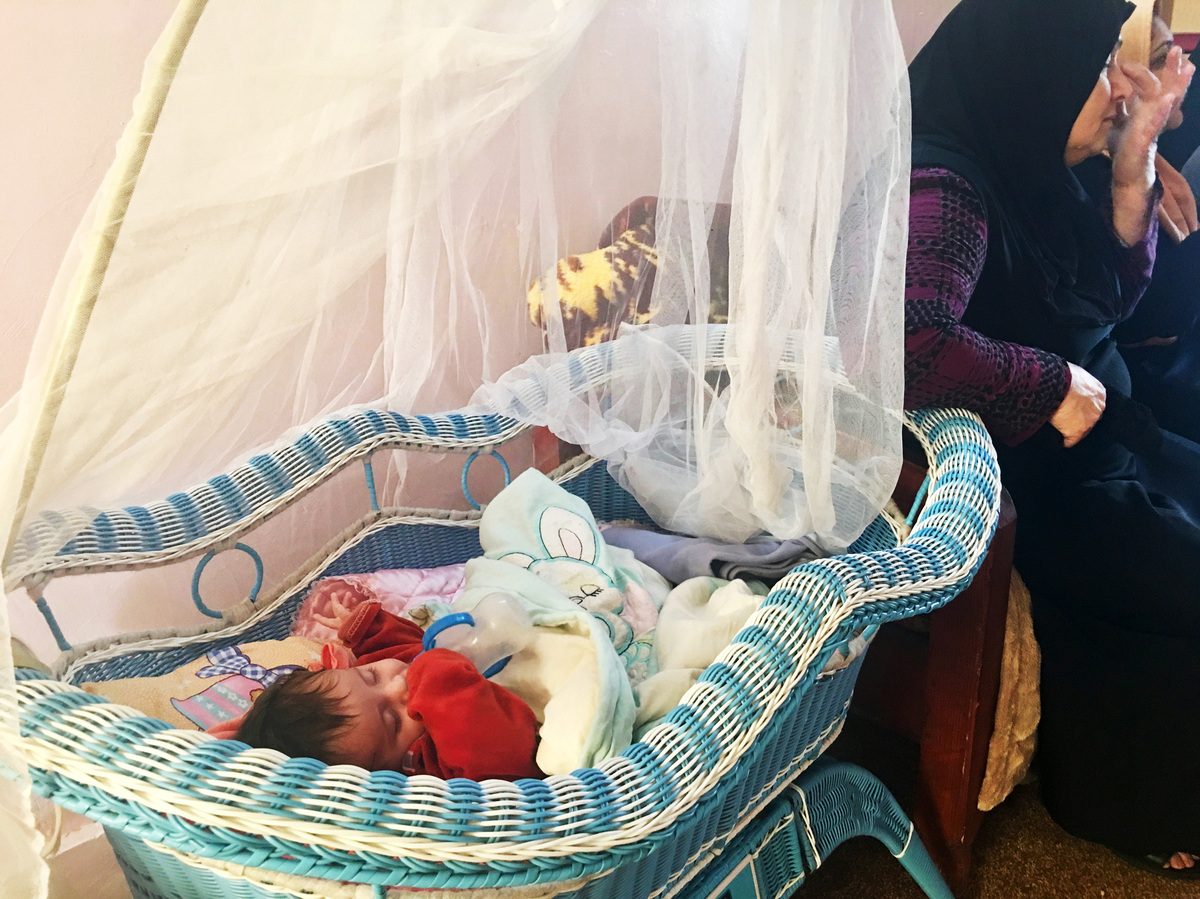 A 7-month-old injured after ISIS placed him in the street to use in an attack on Iraqi soldiers. Caregivers at the orphanage, to which NPR was given exclusive access, named him Hammoudi. His parents are unknown. He's one of the young children at a new orphanage in Mosul. The others are either orphaned, abandoned or rescued from kidnappers.

Many here are the abandoned children of ISIS fathers and the Yazidi girls and women they raped, or children kidnapped from their birth parents and raised in ISIS families. With the war on ISIS almost over, those children are still emerging months after ISIS was driven out of Mosul and the Syrian city of Raqqa.

ISIS considers the tiny, ancient Yazidi religious minority to be infidels. Some were forced to convert to Islam and marry ISIS fighters. Most of them were held as sex slaves.

In the region's conservative societies, rape victims are often blamed for dishonoring their families and are at risk of being killed. With so many Yazidi women captured, religious elders decreed that women enslaved by ISIS would be welcomed back. But there was no such ruling covering their children from ISIS fathers.

"The mothers have no choice but to give up the children" if they want to go home, says Younis. "If the woman is two or three months pregnant she has an abortion. If she is eight or nine months pregnant they take the baby away as soon as it is born."

Younis and aid workers say some families — Yazidi and Shiite Turkmen who were also taken as sex slaves — threaten to kill the women if they come back with children born in captivity. Dozens of those children have ended up with Younis.

Younis, an exuberant woman who is Shiite Turkmen, was appointed head of a provincial committee for kidnap survivors and orphans. She organized teams of volunteers to look for missing women and children in Mosul and in camps for displaced people. ISIS fighters kidnapped thousands of women and children when they took over large parts of northern Iraq in 2014.

The backgrounds of many of the children who have ended up here remain a mystery. Orphanage staff have posted photos on social media of two girls, ages 4 and 5, believed to have been kidnapped from Yazidi families, in hopes that someone will recognize them. 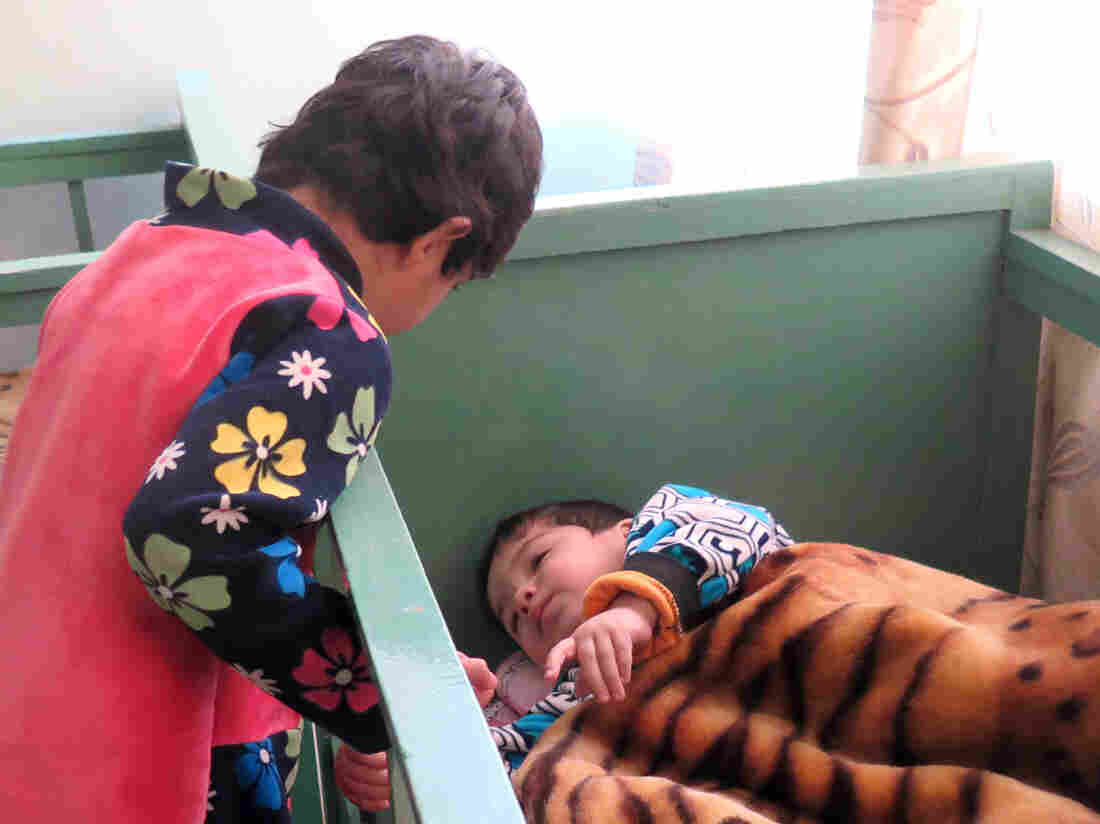 The older girl is believed to have been kidnapped from Yazidi parents three years ago by ISIS. Orphanage staff are hoping to find the parents. They have been able to return some children to their parents after DNA tests. Jane Arraf/NPR hide caption 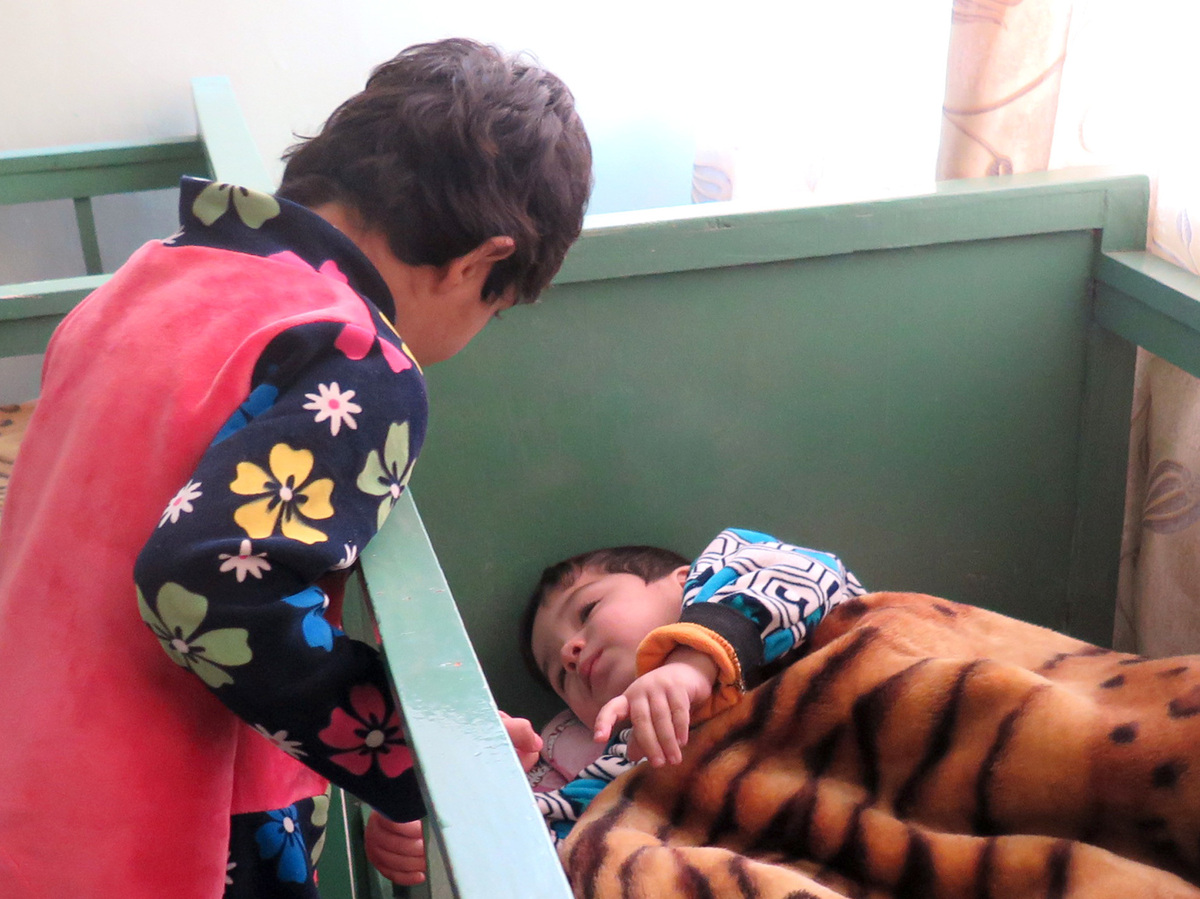 The older girl is believed to have been kidnapped from Yazidi parents three years ago by ISIS. Orphanage staff are hoping to find the parents. They have been able to return some children to their parents after DNA tests.

The elder girl, dressed in flowered fleece pajamas, hovers near the cribs. She smiles shyly at visitors, but doesn't speak.

"She's from Mosul, but we don't know from where," says one of the caregivers, who asked to be called Um Suad. "We speak to her in Arabic, but she doesn't understand."

Um Suad says she's not sure if the girl is traumatized or intellectually disabled. She asks an interpreter to speak to the girl in the Kurdish dialect spoken by Yazidis.

She doesn't respond, but when he asks her to get a ball she understands and brings one.

There are two other Yazidi children, found in a camp where the wives of ISIS fighters have been detained. The girl had been raised by a Turkish woman married to an ISIS fighter.

Younis says she took the girl after other women at the camp testified that the Turkish woman had not had children of her own. All the foreign women married to detained ISIS fighters are now undergoing DNA tests, which will be used to determine whether more of the children they claim as their own had been kidnapped.

"I tried to get information about the girl, but the woman wouldn't tell me anything," says Younis. "In the end I said, 'Just answer one question — what language did she speak when you found her?' The woman said she was speaking Kurdish. 'Did you know anything about her father and mother?' 'No,' she told me. 'She only had a toy — she called it Nawfa.' "

The little girl, her hair in braids and tied with yellow ribbons, is 5 now and speaks only Turkish. When I ask her what her name is, she answers, "I forgot." 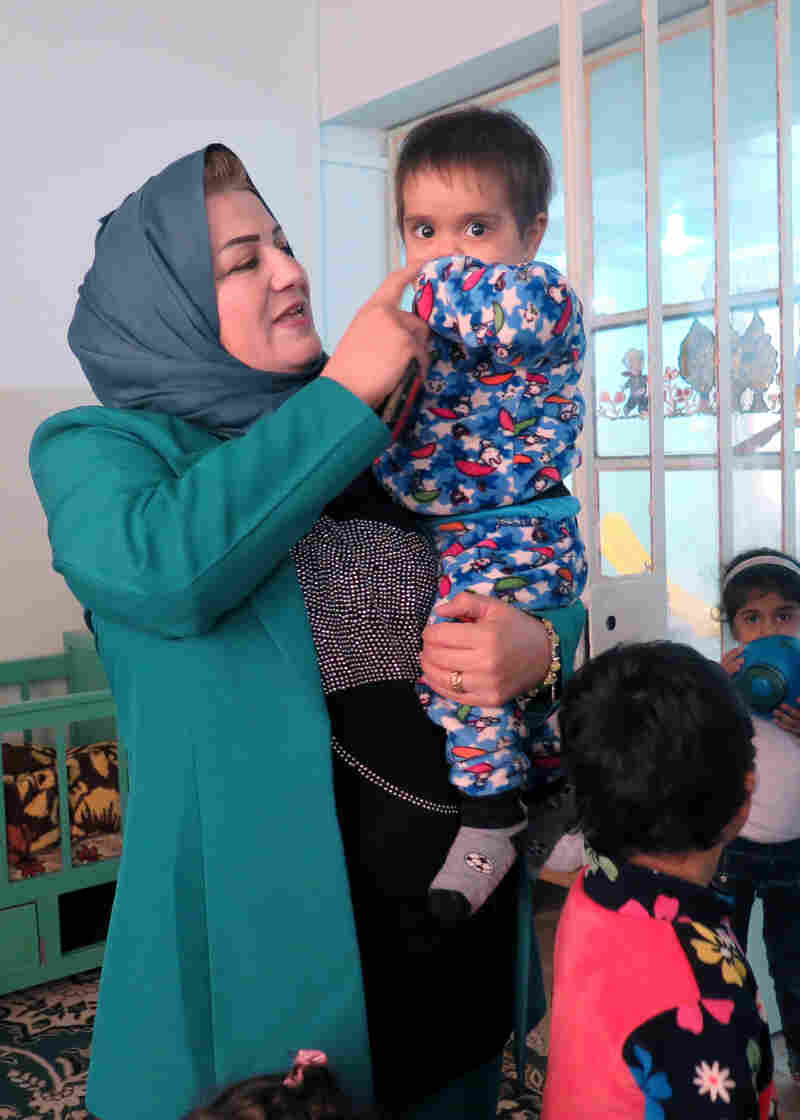 The other children are either orphaned, abandoned or rescued from kidnappers. The woman is Sukaina Ali Younis, founder of the new orphanage and in charge of women's and orphans' affairs in Mosul's Ninevah governorate. Jane Arraf/NPR hide caption

She and another boy kidnapped by an ISIS Turkmen family will be reunited with their birth parents after the court orders are issued. But Younis says the problem is that the children were so young when they were taken, their original families are strangers to them.

While some of the Yazidi women are eager to hand over children who remind them of their captors, Younis says many of them struggle with giving them up.

Earlier that day she had received two children — both little more than a year old, who arrived with their mothers that day from Raqqa. Their families insisted they could not bring the babies home with them.

"I sat with one of the women for two hours," Younis says. "She cried and cried. I told her you are still young."

"I want them to continue their lives," she says. "I want to help them forget after all these things, but, at the end, they say 'send us photos.' "

So for some women Younis sends them photos and videos. One of the young women, 16 when she was kidnapped, handed over to Younis two children born from ISIS fathers. The young woman begged her for news of her children, and every 10 days or so, Younis would send photos. Recently the younger child, who had been malnourished, got sick and died.

"She says, 'Do you know anything about my children? Are they OK? Send me a new picture.' I didn't tell her he died," says Younis, "but how can I send her a picture?"