Accessibility links
Turks Fleeing To Greece Find Mostly Warm Welcome, Despite History : Parallels More than a year after a failed military coup against Turkish President Recep Tayyip Erdogan, hundreds of Turks are seeking refuge in Greece — despite long rivalries between the two nations. 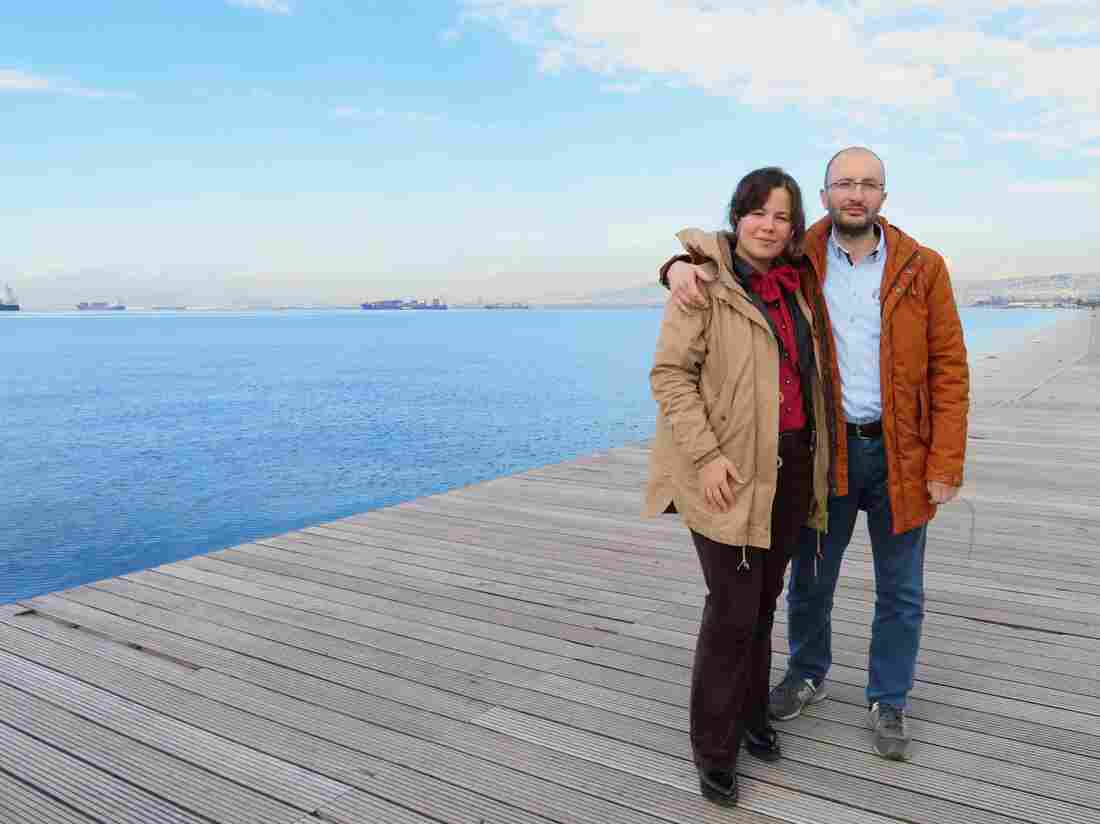 Tuba and Cevheri Guven, both journalists, fled to Thessaloniki after being targeted by their own government. Turkey has imprisoned 262 journalists, making it the world's largest jailer of journalists. "If you write something on Twitter, you can go directly to prison," Tuba says. Joanna Kakissis/For NPR hide caption 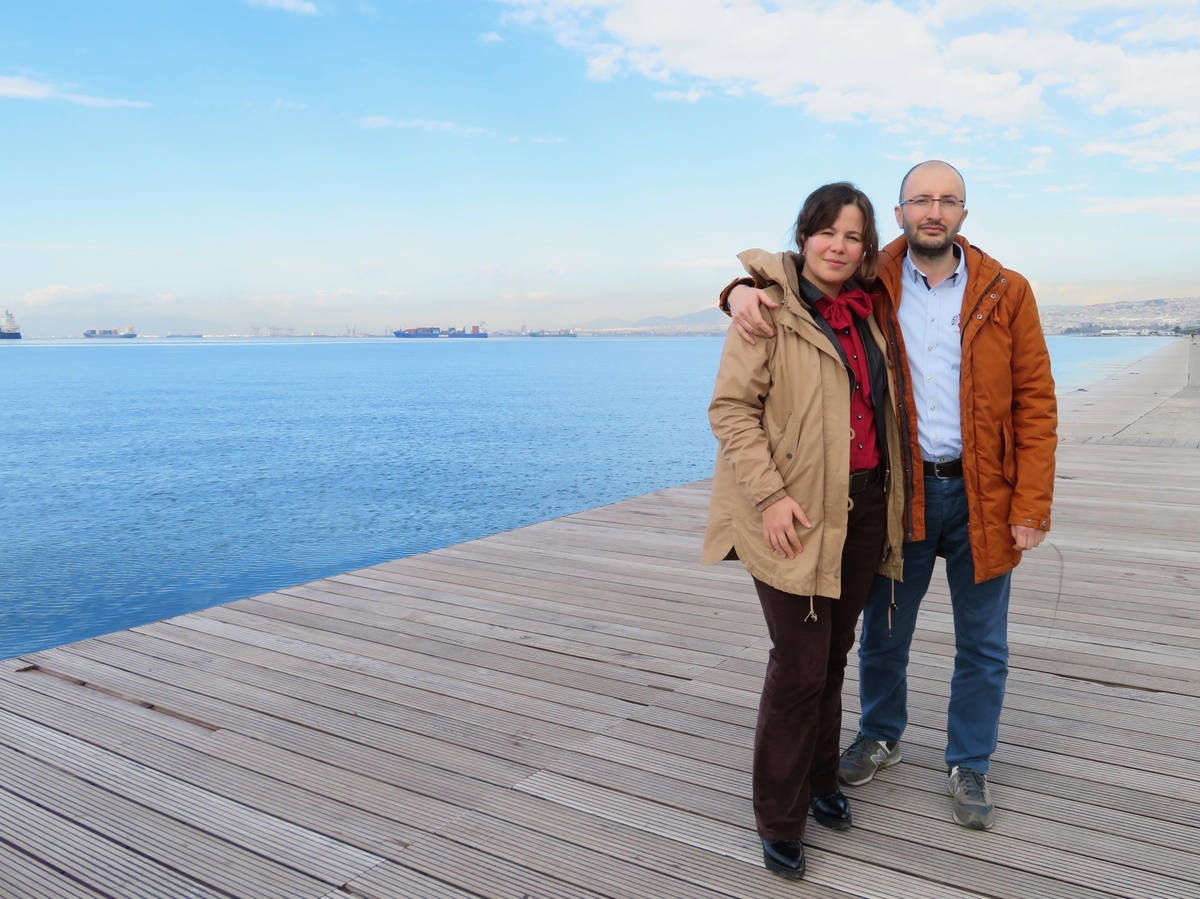 Tuba and Cevheri Guven, both journalists, fled to Thessaloniki after being targeted by their own government. Turkey has imprisoned 262 journalists, making it the world's largest jailer of journalists. "If you write something on Twitter, you can go directly to prison," Tuba says.

Sumeyye Nur and her elderly parents were driving outside Izmir, Turkey, last summer when two plainclothes policemen pulled them over, demanding to know why her 75-year-old father owned a nice car.

It was no ordinary stop. It was part of a sprawling government crackdown on tens of thousands of Turks after last year's failed military coup against Turkish President Recep Tayyip Erdogan.

The police arrested Nur's father for having money in what the government now deemed a "terrorist bank."

"He stayed eight months in prison," says the 41-year-old former civil servant, who worked as a graphic designer and arts writer for government-owned media. "You cannot imagine the conditions. Terrible. Overcrowded. And not everybody has a bed. And these people are doctors, teachers, professors."

The government fired Nur and canceled her passport. Her father told her to get out of Turkey. She paid a smuggler roughly $6,000 to cross the Evros River into neighboring Greece, a country that's had a historically tense relationship with Turkey.

Nur now lives in a hostel in the northern city of Thessaloniki and works as a translator.

"I came last January," she says. "When I came here, there were like 10 families."

Now, at least 1,000 Turkish citizens are seeking refuge in Greece, according to the refugee support nonprofit SolidarityNOW. It's hard to pin down an exact number because not many have applied for asylum, says Antonis Spathis, a human rights lawyer in Thessaloniki. The Greek Asylum Service told NPR that 186 Turkish citizens applied for asylum in 2016 and noted there has been a "significant" increase in 2017, but did not provide figures, saying those will be available in early 2018.

"Many are in hiding and don't want to risk revealing themselves by seeking help from the Greek authorities," says Spathis, who has advised several Turkish citizens who have fled to Greece since last summer's attempted coup. "Some came to Greece with the intention of going on to other European countries or the U.S., but those pathways are closing."

The Greek government spokesman, Dimitris Tzanakopoulos, declined to comment specifically on Turks seeking refuge in Greece, saying it's up to the country's independent asylum service to decide the status of any refugee applications. "We will follow all the legal provisions of international agreements and laws that regulate the asylum process," he says.

Most Turkish citizens who have fled to Greece are living off their savings, unable to work unless they are granted asylum or a residency permit. A few have enough money to buy property.

And many of the Turks Spathis has met worry that they will never be able to return because, he says, "Erdogan is too powerful. They've lost hope that this will change."

"I am not a terrorist"

These Turks include Cevheri and Tuba Guven, journalists who fled Istanbul last summer with their two young children.

"It's impossible now to criticize in any way the government," says Tuba, a 36-year-old former reporter and producer for Turkish public television. "If you write something on Twitter, you go directly to prison."

At a cafe near Thessaloniki's port, a Greek waiter greets the Guvens by name. They've made friends here. Their children are thriving in public school.

Cevheri, 40, used to run NOKTA ("point" in Turkish), a weekly political news magazine. He's the reason the family fled. He published a cover unflattering to Erdogan and live-tweeted his own arrest.

"There were many charges brought against me," he says. "Starting a civil war. Making terror propaganda. Arming people against the government. And trying to bring down the government. That last charge, that's what I was found guilty of."

He was sentenced to 22 years in prison. Before he could be jailed, the couple paid a Syrian smuggler $17,000 for fake passports and passage across the river marking the land border with Greece.

Once they arrived on Greek territory, a Turkish taxi driver took them to a Greek police station in the northern city of Orestiada so they could request asylum.
Tuba was worried.

"You know, because of the historical problems, we always think the other is the enemy," she says. "I thought maybe [the Greeks] don't like me because I am Turk. But it's a very false idea. I was living the worst day of my life, completely worst day of my life. They welcomed me."

Greece was part of the Ottoman Empire for 400 years. The Greeks and Turks fought bloody wars as the empire fell. As recently as 1996, Turkey and Greece almost went to war over Imia (Kardak in Turkish), an uninhabited islet in the Aegean Sea.

Relations improved after Greece helped Turkey recover from a devastating earthquake in 1999 that killed 17,000 people.

"We have daily incidents in the Aegean of Turkey's fighter planes [entering] into Greek airspace," says Thanos Dokos, director of the Hellenic Foundation for European and Foreign Policy in Athens. "Turkey is also disputing the sovereignty of an undefined number of islets and small islands in the Aegean, saying that we need to produce historical proof of ownership."

And though Greece strongly backs Turkey's bid to join the European Union, Dokos says that support is grounded in the idea that a Turkey inside the EU would "have to resolve any territorial differences with its neighbors."

Despite the political problems, he says, "relations between the Greek and Turkish people have always been quite warm."

"I always say we are brothers with the Turks," Boutaris recently told Turkey's Anadolu Agency. "We have the same history and the same culture. We fought each other a lot of times, but the past must be left behind."

Most of the Turkish asylum-seekers NPR spoke to say they feel safe in Greece.
But Ali, a former literature professor and scholar of the 13th-century poet Rumi, is afraid to give his last name.

"His intelligence service is taking the Gulen sympathizers from the countries illegally," he says. "So I am afraid."

Spathis, the human rights lawyer, says some Turks also grew distressed after Erdogan pressed Greek Prime Minister Alexis Tsipras to hand over eight Turkish military officers who fled to Greece by helicopter after the failed coup. Erdogan seemed to ignore a ruling by the Greek Supreme Court that the soldiers cannot be extradited to Turkey because they will not get a fair trial there.

A Greek human rights group also says it has credible evidence of Greek authorities sending back at least one Turk, Murat Capan, managing editor of the same magazine that Cevheri Guven led. (The Greek government denies this.) Capan is now in a Turkish jail.

Tuba Guven says she's heard of more Turks choosing to cross the Aegean to Greece because of increased police vigilance on the land border. Last month, the bodies of a Turkish family — a mom, dad and three young children — washed up on the island of Lesbos. The father, Huseyin Maden, a 40-year-old physics teacher, had lost his job because of suspected ties to Gulen.

Despite the risks, Spathis says there is still a "steady flow" of Turks fleeing to Greece. Earlier this month, a boat carrying 32 teachers and civil servants fleeing the purge in Turkey arrived on the Aegean Island of Chios.

Ali, the Rumi scholar, says Greece almost feels like home. He likes walking around Thessaloniki, with its winding streets and the burnt-caramel scent of the milk pudding kazandibi wafting from local patisseries.

"I feel like I'm in a street of Istanbul or Ankara," he says. "I'm comfortable here. Thanks to the people."