Accessibility links
Where Did The Islamic State Fighters Go? : Parallels The extremist group has lost all its strongholds in its core areas in Iraq and Syria. But some militants are still on the loose and plan to regroup and cause more mayhem. 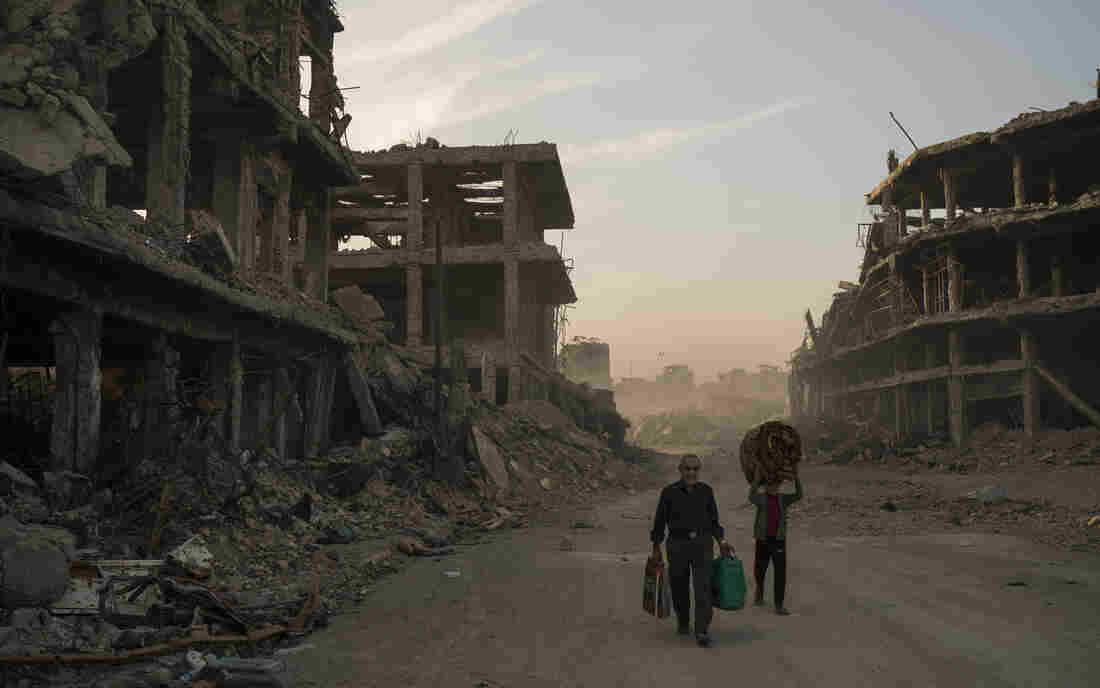 Two civilians carry belongings they collected from their damaged house in the Old City of Mosul, Iraq. The Islamic State controlled the northern Iraqi city for three years before being driven out last year. ISIS no longer controls any cities, but small groups of fighters remain in Iraq and Syria, and are still considered a threat. Felipe Dana/AP hide caption 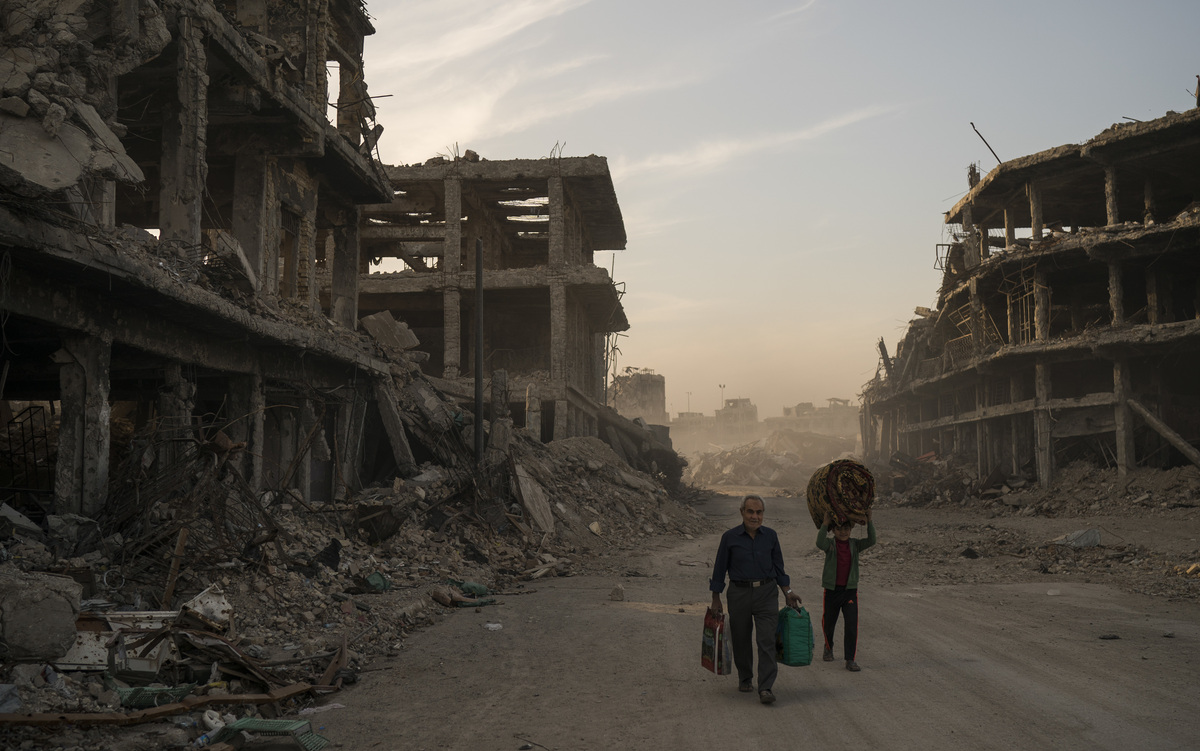 Two civilians carry belongings they collected from their damaged house in the Old City of Mosul, Iraq. The Islamic State controlled the northern Iraqi city for three years before being driven out last year. ISIS no longer controls any cities, but small groups of fighters remain in Iraq and Syria, and are still considered a threat.

The Islamic State no longer controls cities. Its previously large ranks are decimated. Survivors have scattered into the desert. Yet ISIS still has militants with weapons and plans for renewed mayhem.

"We have repeatedly said in this room, the war is not over," Defense Secretary James Mattis noted last week at the Pentagon.

He said U.S. forces are still tracking down small pockets of ISIS fighters. In Iraq, the U.S. is still working closely with the Iraqi security forces, in hopes they can take full control of the country's territory.

"It may be a dozen [ISIS] guys who finally find each other. They get together and live in the one house. They start licking their wounds and thinking, 'What can we do?' " Mattis said. "What we want to do is drive this down to a point it can be handled by local authorities, by police and that sort of thing."

It's more complicated in Syria, where the U.S. and its partners have largely destroyed ISIS in the eastern part of the country, in areas east of the Euphrates River.

Yet some bands of ISIS militants are now fleeing westward, according to Mattis. The ISIS fighters apparently believe their chances of survival are better in areas controlled by their other enemies — Syrian President Bashar Assad, who is supported by Russia and Iran.

Mattis says the U.S. military will stay in eastern Syria for now in order to allow U.S. diplomats, aid workers and contractors to come in and help stabilize the region. But the war elsewhere in the country remains open-ended.

So how many Islamic State fighters are there? It's always been a guesstimate.

When ISIS was at its peak about three years ago, the CIA said it had as many as 31,000 fighters.

Now, the U.S. military thinks fewer than 1,000 are left in areas where the American coalition is operating in Iraq and Syria.

"The Islamic State fighters, in a number of places, Mosul, [Iraq], Raqqa, [Syria] many others, put up very fierce fighting. And thousands of their fighters died in these battles," said Daniel Byman of Georgetown University and the Brookings Institution.

That accounts for many of the fighters. He puts the surviving ISIS members into a couple other categories, with intentions that vary.

"Another group of fighters probably tried to flee or blend in locally" if they are Iraqi or Syrian citizens and want to give up the battle, Byman said.

But there are also many foreign fighters who blend in so easily. Some will likely stay and fight, while others may want to return home.

Many foreign fighters came from Europe. Nick Rasmussen, who just stepped down as head of the U.S. National Counterterrorism Center, says European countries have been bracing for returning militants.

However, "The problem we envisioned perhaps a few years ago, of thousands and thousands of foreign fighters departing the conflict zone once the war started to subside, it's not happening in those numbers," Rasmussen said.

So most of this news sounds pretty good. ISIS has no safe haven. Its fighters are on the run. And they aren't escaping abroad in large numbers.

But there's an important precedent. The forerunner of ISIS was al-Qaida in Iraq. The U.S. and its allies dismantled that group a decade ago.

The group then re-emerged as ISIS, stronger than ever, as conditions proved more favorable. This included the chaotic Arab uprisings of 2011 and the U.S. military withdrawal from Iraq that same year.

By the summer of 2014, ISIS controlled large parts of Syria and Iraq and ruled over millions of people with its self-declared caliphate.

This lesson isn't lost on ISIS as it prepares its next move.

"It is far easier to kill a terrorist than to slay an ideology, said Gayle Tzemach Lemmon with the Council on Foreign Relations. She was in the Syrian city of Raqqa in August, as the U.S. and its allies were retaking the city that served as the ISIS headquarters for several years.

The U.S. has a good record when it comes to winning battles in the Middle East. What's hard, she says, is the aftermath.

"As long as the ground is still ripe for insurgency, it's very hard to keep a war ended," she said. "And the truth is no one really wants to pay for the rebuilding. Nation-building is a 14-letter word that's become a four-letter word."