Accessibility links
Tensions Rise Between Pakistan And U.S. After President Trump's Tweet : Parallels A New Year's Day tweet by President Trump has exacerbated tensions in an already fraught relationship. He criticized Pakistan for "lies and deceit" and harboring terrorists. 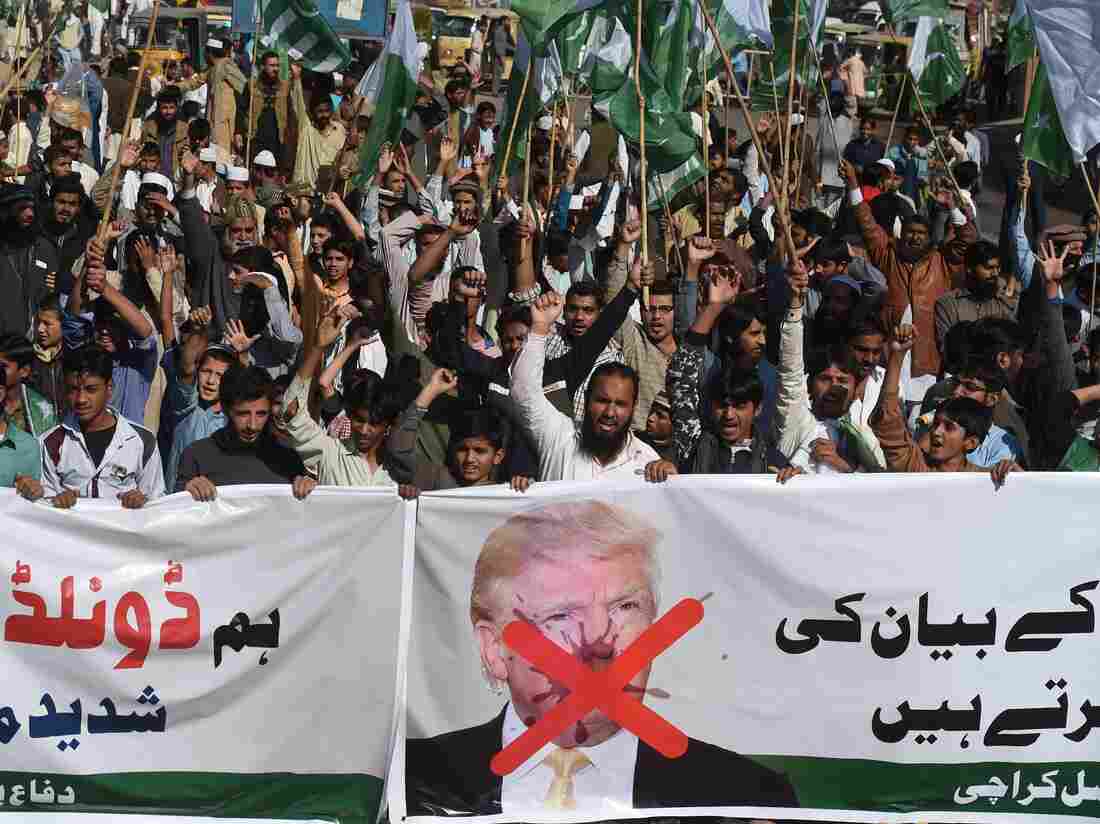 Activists of the Difa-e-Pakistan Council shout anti-U.S. slogans at a protest in Karachi on Tuesday. Pakistan summoned the U.S. ambassador after President Trump lashed out at Islamabad with threats to cut aid over "lies" about militancy. Asif Hassan/AFP/Getty Images hide caption 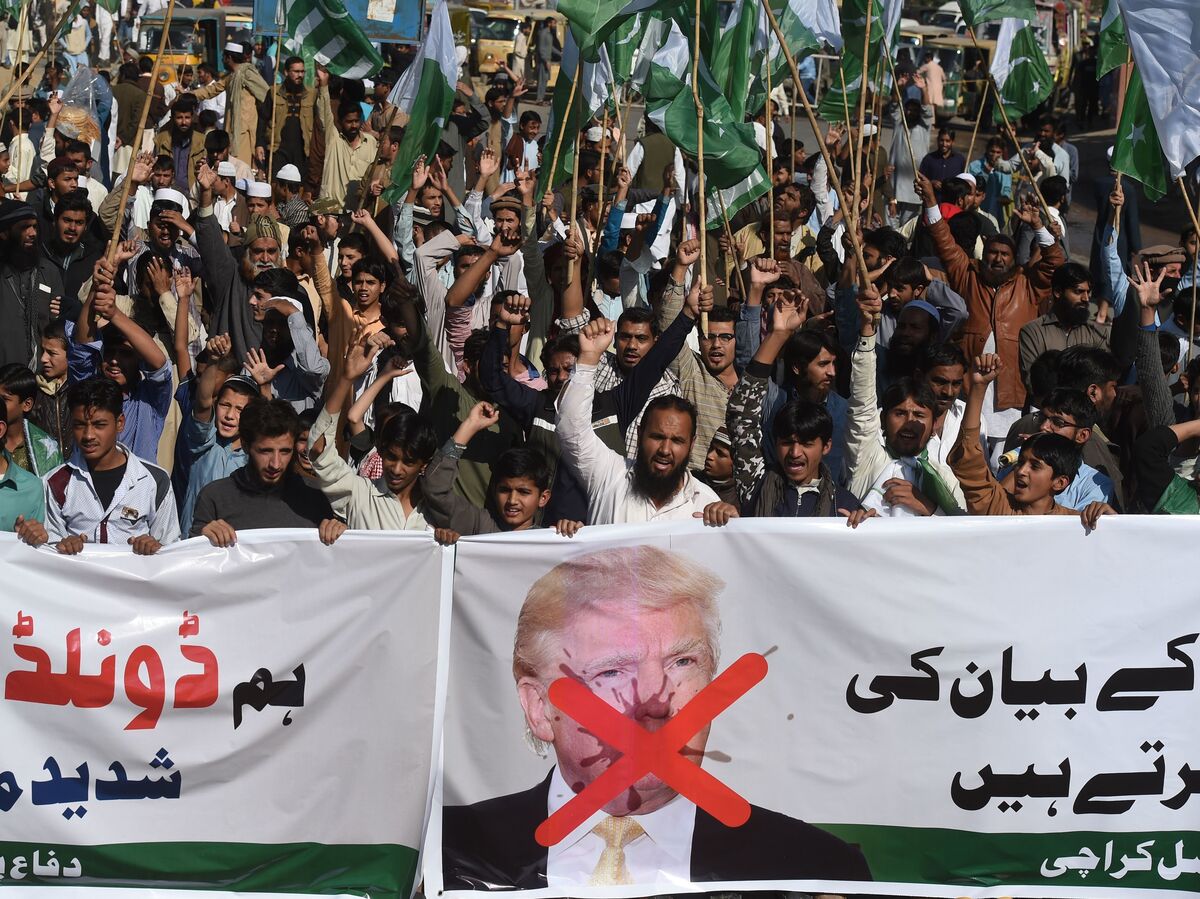 Activists of the Difa-e-Pakistan Council shout anti-U.S. slogans at a protest in Karachi on Tuesday. Pakistan summoned the U.S. ambassador after President Trump lashed out at Islamabad with threats to cut aid over "lies" about militancy.

Pakistan reacted angrily to President Trump's first tweet of 2018, in which he accused the country of taking billions of dollars in U.S. aid while continuing to harbor militants.

"The United States has foolishly given Pakistan more than 33 billion dollars in aid over the last 15 years," Trump tweeted on Monday morning, "and they have given us nothing but lies & deceit, thinking of our leaders as fools. They give safe haven to the terrorists we hunt in Afghanistan, with little help. No more!"

"We have already told the U.S. that we will not do more, so Trump's 'no more' does not hold any importance," Foreign Minister Khawaja Asif told Pakistani news channel Geo. "Trump is disappointed at the U.S. defeat in Afghanistan and that is the only reason he is flinging accusations at Pakistan."

Pakistan's National Security Committee, formed of senior military officials and government ministers, also convened Tuesday and expressed "deep disappointment" over the tweet, which it said "struck with great insensitivity at the trust between [the] two nations built over generations, and negated the decades of sacrifices made by the Pakistani nation."

The president's tweet reflected tensions that have been growing between Washington and Islamabad since Trump outlined his new strategy for the war in Afghanistan in August. Back then, Trump accused Pakistan of offering "safe haven to agents of chaos, violence, and terror."

The U.S. has delivered billions in aid to Pakistan since 2002, but a deepening sense of distrust has marred the relationship. Pakistan says it has paid an enormous price as an ally in the war on terrorism. 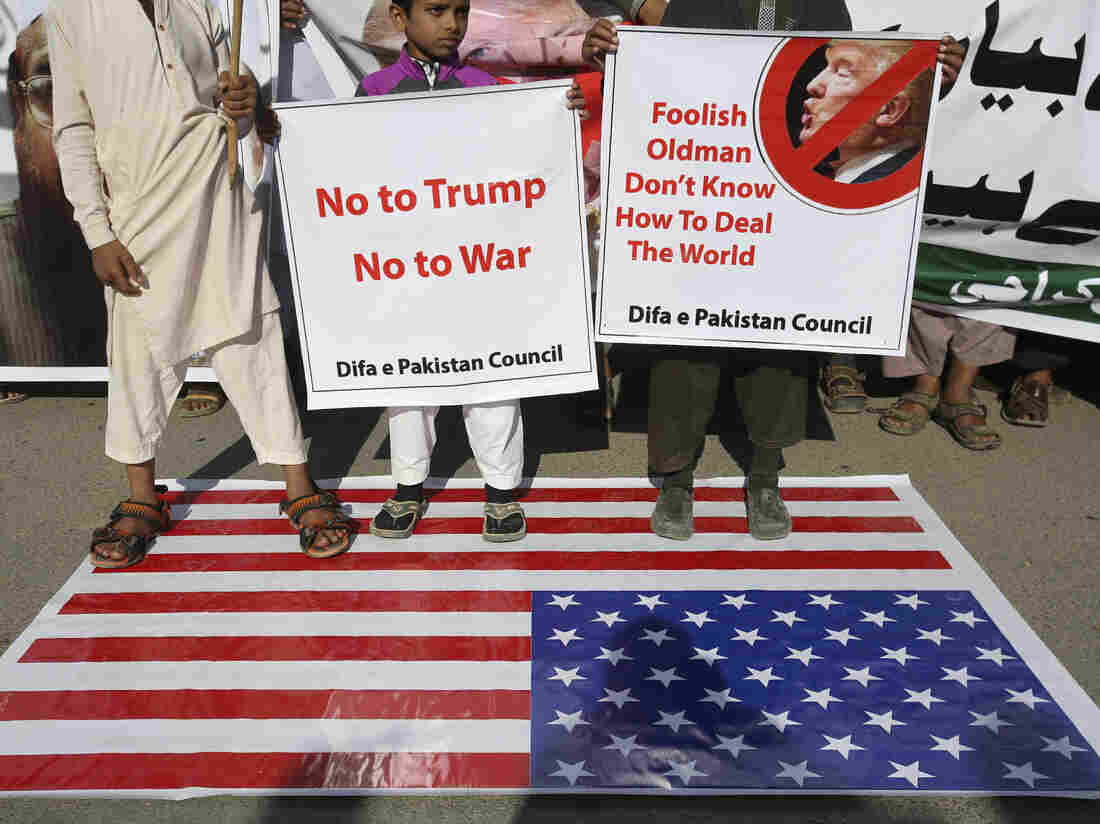 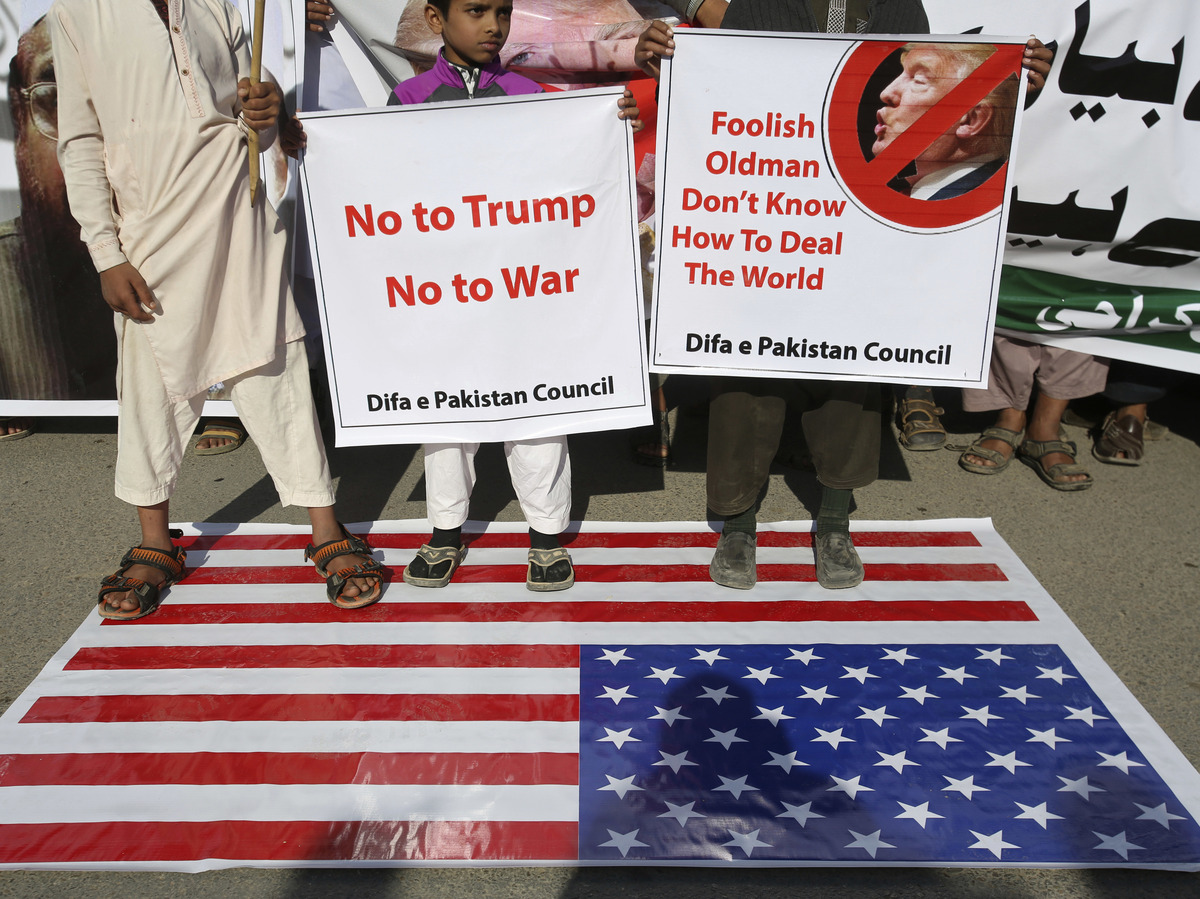 Supporters of Pakistani religious groups rally to condemn a tweet by President Trump in Karachi on Tuesday.

"Seventy thousand lives for the last 16 years," says Shahzad Chaudhry, a retired air vice marshal, referring to the number of Pakistani civilians and soldiers killed in militant attacks — widely seen in Pakistan as blowback for the country's allying with the U.S. in the war on terrorism.

"The U.S. looks at Pakistan as a transactional nation," says Chaudhry. "Used when needed, and trashed when not needed."

Trump reiterated his message that Pakistan harbors terrorists in December, and it was echoed by Vice President Pence during a Dec. 21 visit to Afghanistan.

Previous U.S. administrations have also accused Pakistan of playing a double game of allying with the U.S. while harboring militant networks loyal to the Taliban, seen as security assets.

"But the tone is much sharper under the Trump administration," notes Michael Kugelman, South Asia senior associate at the Wilson Center.

"I think what we're seeing now is a substantial reordering of the relationship," says Zaidi. "This is actually a process. And the process is a downward decline in the quality of trust," he says, between the U.S. and "the Pakistani military, which is all-powerful and controls most of what happens with respect to these relationships."

Zaidi describes Trump's tweets as "rhetorical coercion to see if they can scare Pakistan into doing some of the things that the U.S. would like Pakistan to do," referring to a crackdown on militants in Pakistan's border areas.

Pakistan is unlikely bow to pressure, he says.

In recent days, Pakistan's military appeared to signal a certain defiance to the United States. Last week, Hafiz Saeed, a cleric designated as a terrorist by the U.S., participated in a rally in Rawalpindi, where Pakistan's military headquarters is based.

On Dec. 29, the New York Times reported that Pakistan refused to hand over a militant affiliated with the Haqqani network that is linked with the Taliban. U.S. officials believed the militant could provide information about an American kidnapped along with an Australian in Kabul in 2016.

In response, the Trump administration was considering withholding a payment of $255 million to Pakistan's military, the paper reported.

Withholding aid is one of several actions the U.S. is considering. In August, Secretary of State Rex Tillerson openly mulled over stripping Pakistan's designation as a major non-NATO ally. Analysts say the U.S. could also increase drone strikes targeting militants on Pakistani territory.

Analysts say Pakistan is betting that the U.S. will not take drastic steps because Pakistan serves as the chief air corridor for U.S. military supplies and troops to reach Afghanistan. It also still shares at least some intelligence with the U.S.

"There are significant costs to the United States of rupturing the U.S.-Pakistan relationship," says the Wilson Center's Kugelman. "Pakistan would be very likely to retaliate in ways that would imperil U.S. interests."

One retired Pakistani general who is close to serving members of Pakistan's military said any retaliation that would involve halting the U.S. supply routes would be "a last resort." There are other, less dramatic options being considered, he said, such as cutting numbers of visas for U.S. diplomats. The retired general spoke on condition of anonymity to speak freely about internal discussions.

But Pakistan, too, needs the U.S. It needs Washington to support its appeals to the World Bank and the International Monetary Fund for loans as it seeks to stabilize its economy. The navy and air force largely rely on U.S.-manufactured technology, says Husain Haqqani, a former Pakistani ambassador to the U.S.

China defended Pakistan on Tuesday, as a Beijing Foreign Ministry spokesperson said, "We believe that the international community should fully recognize Pakistan's anti-terrorism."

But Trump's tweet — and his administration's increasingly tough line toward Pakistan — have been welcomed by many Afghans, who have long pressed the U.S. to take a harder line on Pakistan.

"President Trump has finally said what everybody needed to hear," Hamdullah Mohib, Afghanistan's ambassador to the U.S., tells NPR.