Accessibility links
Chechnya's LGBT Muslim Refugees Struggle To Cope In Exile : Parallels The Netherlands is one of a handful of European countries giving refuge to gay Chechens, after reports emerged that Chechnya's authorities were rounding up and torturing the LGBT community. 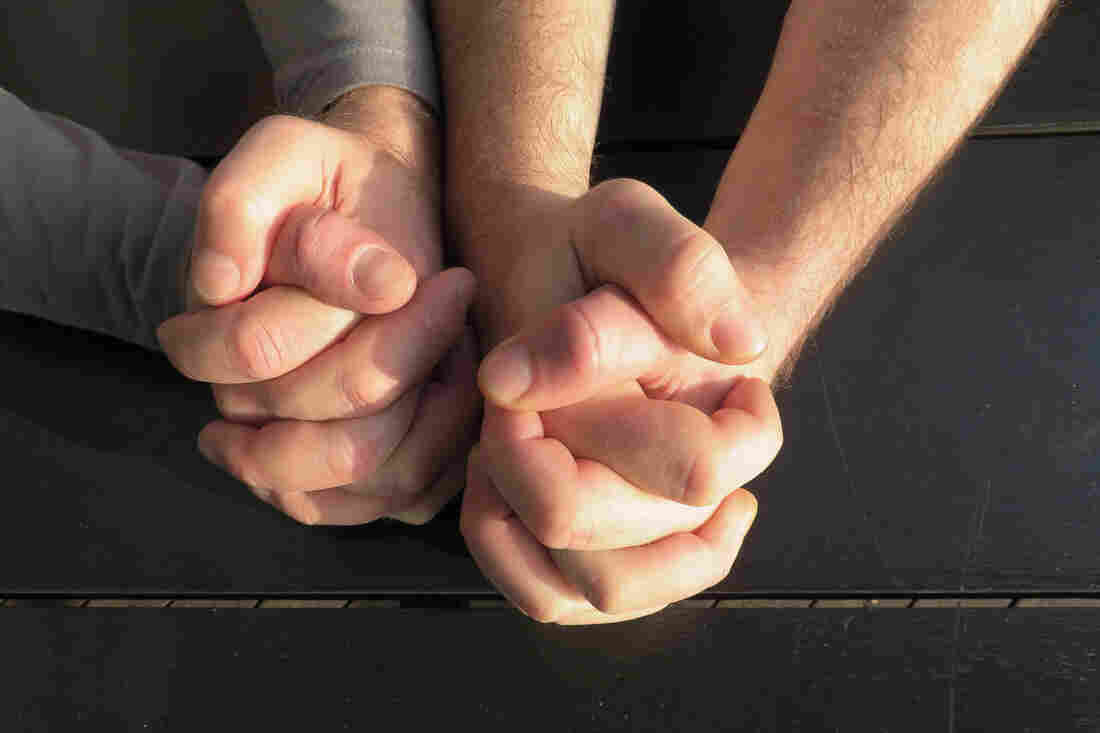 Abdul Kadr and Artur fled their homes in Chechnya because of their sexuality and are now living in the Netherlands. Joanna Kakissis/NPR hide caption 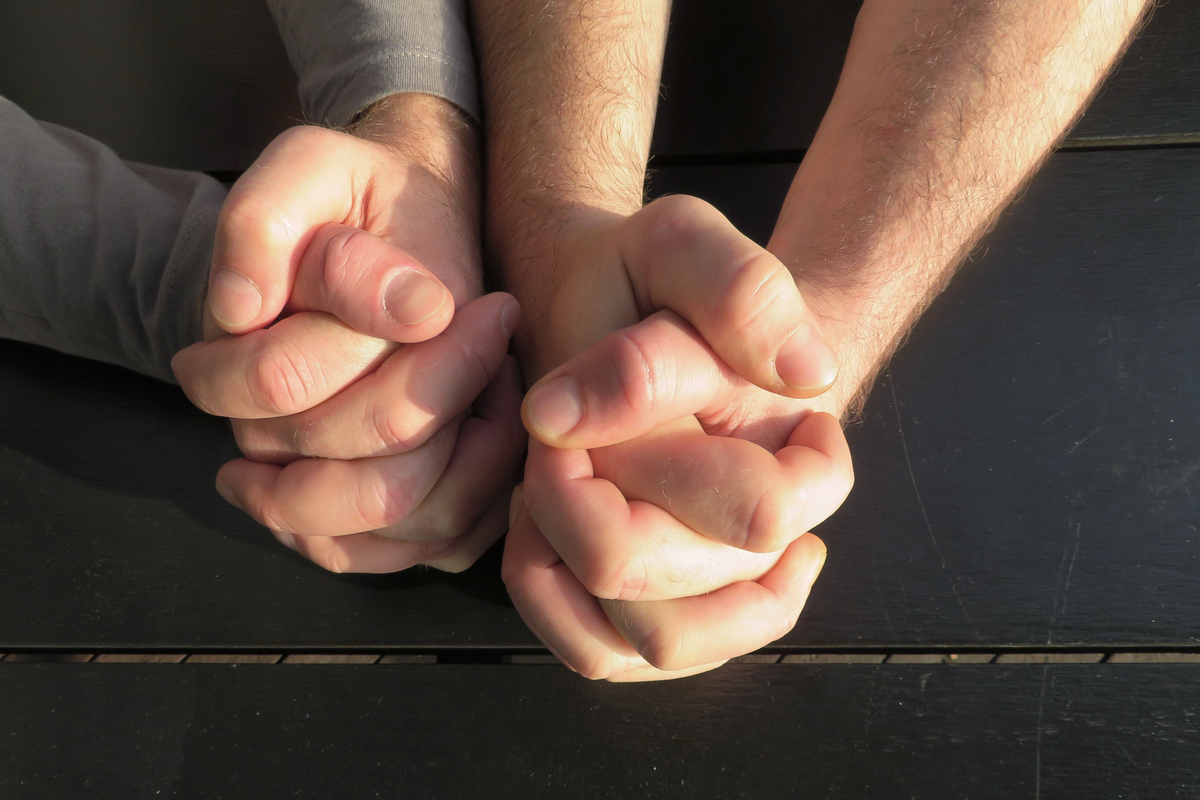 Abdul Kadr and Artur fled their homes in Chechnya because of their sexuality and are now living in the Netherlands.

Abdul Kadr's wife found out he was gay the night his relatives came to kill him.

She hid him inside the home in Grozny, Chechnya, where they lived with their four young children, and told him she'd stand by him.

"She saved my life," says Abdul Kadr, a silver-haired former businessman in his 40s.

Being married to a woman was how he hid his eight-year relationship with another man, also a married father. It was a way to survive in Chechnya, a largely Muslim southwestern republic of Russia where gay men are reportedly sent to torture camps and even killed.

Abdul Kadr is not his real name. He chose it for himself as protection from what he calls "the long arm of the Chechen secret police," which he fears will reach him even in the Netherlands, where he sought asylum early last year. A recent Human Rights Watch report suggests Chechen authorities are able to track down gay Chechens seeking asylum in Europe.

The Netherlands is one of a handful of countries in Europe offering protection to gay Chechens.

I meet Abdul Kadr outside the Amsterdam train station. He's with Artur, another Chechen who has also chosen a new name out of fear for his safety.

"The police electrocuted my friends, beat them, denied them food and water," says Artur, a mop-haired, 25-year-old former student with bright blue eyes.

The suspected gay detainees "slept on the ground, on concrete, while the drug dealers and terrorists slept in beds," he says.

'They are still afraid'

After spending their entire lives hiding their true selves, Abdul Kadr and Artur still find it nearly impossible to talk about their sexuality, even in a country that in 2001 became the first in the world to allow same-sex marriage.

"I couldn't overcome my fear and give them details, even if it meant my life was hanging by a thread," he says. "I was terrified."

Listening with a grimace on his face is Sandro Kortekaas, who runs LGBT Asylum Support, a volunteer organization that assists refugees in the Netherlands. 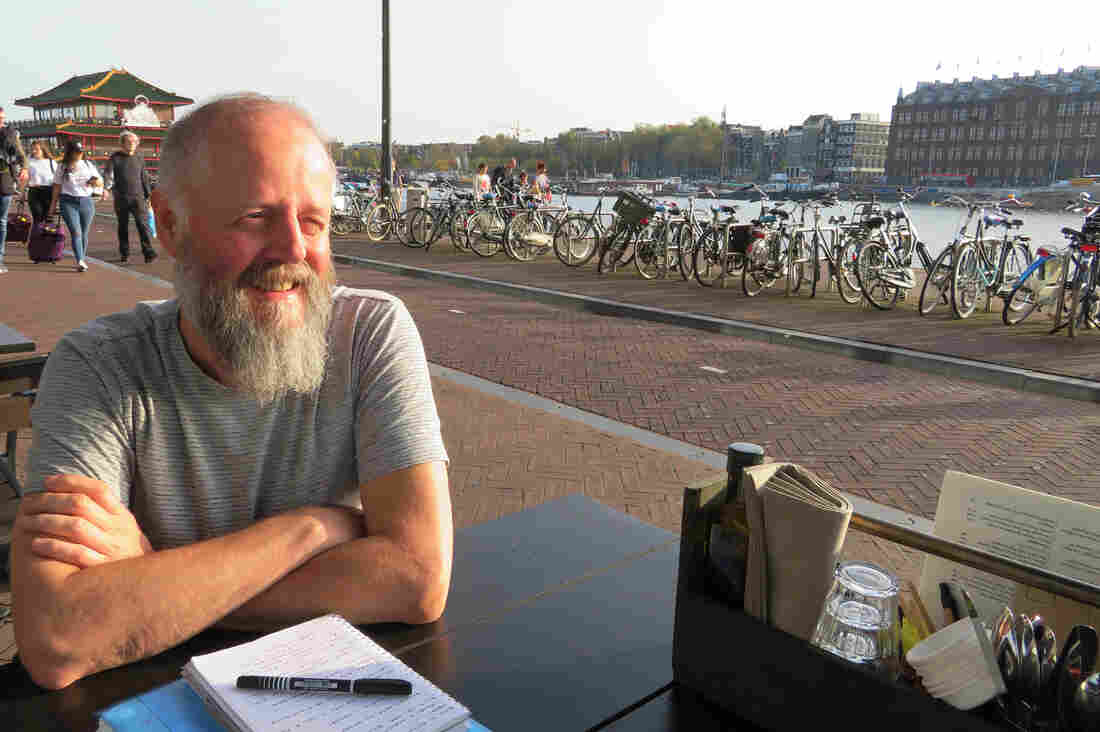 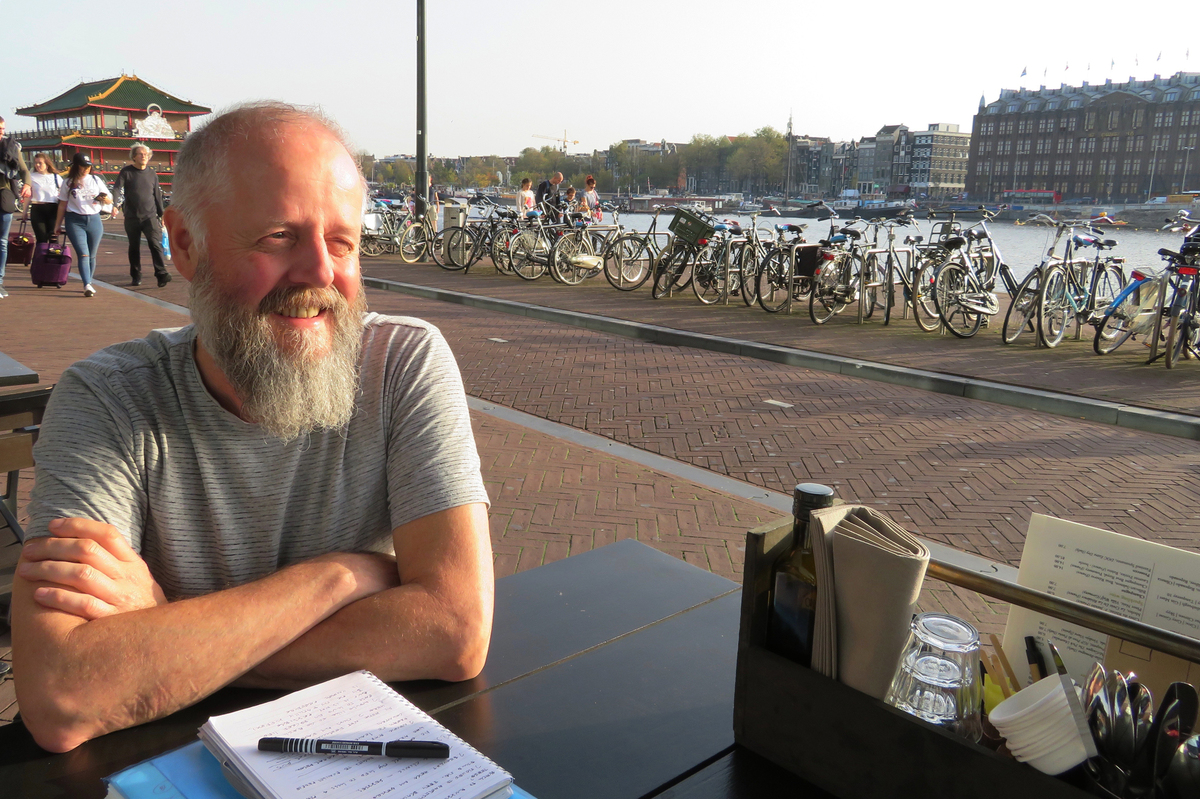 Refugees who come from countries that crack down on the lesbian, gay, bisexual or transgender communities have rarely spoken publicly about their lives.

"So when you have the Dutch immigration service [asking] you to tell your whole story, and if there is something that is not good, it means they can say, 'Sorry, we don't think you are gay,'" Kortekaas says. "That's horrible."

Abdul Kadr says he would be killed if he's sent back to Chechnya, where President Ramzan Kadyrov claims everyone in the country is heterosexual.

One Chechen who came out publicly as gay sought asylum in Germany but was denied and deported back to Chechnya last September. Movsar Eskarkhanov publicly retracted his claims that he was assaulted for being gay and now blames his epilepsy medicine for his coming out. After returning to Chechnya, he apologized publicly, like others who criticize Kadyrov.

The Dutch Immigration and Naturalization Service does not register the sexual orientation of those who apply for asylum, so it's hard to know how many LGBT asylum-seekers have been rejected.

"It can be, for example, that people have not given credible statements regarding their identities or nationalities," says Annick Oerlemans, a Dutch asylum officer. "It's really an individual assessment in every individual case. We have interviews with LGBT asylum-seekers basically every day, I think. And we're actually trained to make people feel as comfortable as we possibly can in order to get them to speak."

An Amsterdam nonprofit, Secret Garden, tries to help LGBT asylum-seekers open up even before those immigration interviews.

Elias Karam, a project manager at Secret Garden, says he works with traumatized refugees who are often self-hating because of the abuse they faced in their home countries.

"When it comes to their homosexuality," Karam says, "they just don't know how to talk. They are still afraid." 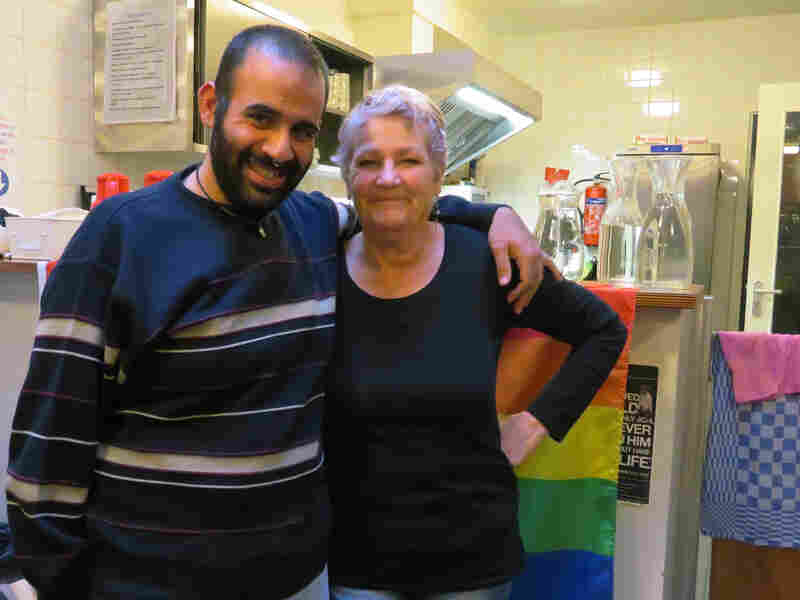 Elias Karam (left) and Carla Pieters work with Secret Garden, an Amsterdam nonprofit that tries to help LGBT asylum-seekers open up, even before the immigration interviews. Joanna Kakissis/NPR hide caption 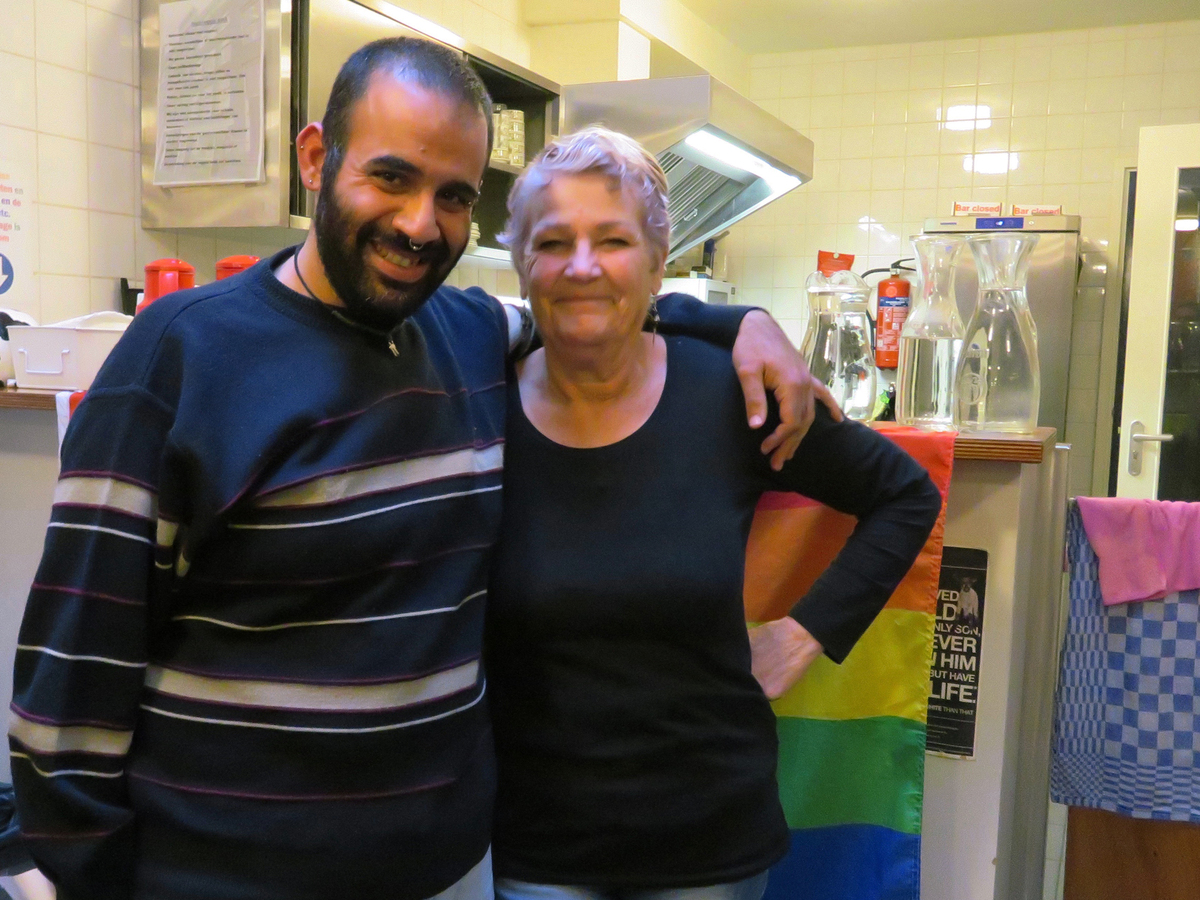 Elias Karam (left) and Carla Pieters work with Secret Garden, an Amsterdam nonprofit that tries to help LGBT asylum-seekers open up, even before the immigration interviews.

At one recent meeting, held largely in Arabic and English, a transgender woman from Lebanon admits that she had a panic attack walking outside in makeup and high heels for the first time.

Others talk about beatings, rejection and isolation.

Some have fled Dutch refugee camps after homophobic attacks.

"They sleep in the woods because they are afraid of men from their own countries, who attack them and pee in their beds," says Carla Pieters, a Secret Garden volunteer who hosts LGBT refugees in her Amsterdam home. "They are afraid to trust anyone."

'What we left behind'

Abdul Kadr and Artur, the two Chechens, are working out their own experiences with Kortekaas from LGBT Asylum Support, who communicates with them with the help of a translator from Kyrgyzstan.

I'm always fighting with myself over my sexuality, but I still believe God loves me.

Artur, a Chechen refugee in the Netherlands

Abdul Kadr and Artur are Muslim and say they pray daily. "I'm always fighting with myself over my sexuality," Artur says, "but I still believe God loves me."

Though he and Abdul Kadr no longer live in constant fear, they are lonely, isolated and wary of reaching out to other Russian speakers.

Abdul Kadr is still waiting for a decision on his asylum request. He wonders if the Dutch think it's strange that he wants so badly to reunite with his wife and children.

"She's my best friend, and I can't live without my children," he says. "Gay people can be parents here in Holland."

Artur has received asylum but says he often dreams about something that seems suicidal — returning to Chechnya.

"I was never looking for freedom to be openly gay," he admits, lowering his eyes. "I didn't want my family to have any problems because of me. And now they have huge problems. My mom is literally losing her mind because the police come to our house every day."

He's too afraid to contact his family directly. A friend told him about his mother's nervous breakdown.

"I want to apologize to her because I've ruined her life," Artur says, breaking into sobs.

"It's not your fault," Kortekaas says, patting his back. "Don't punish yourself."

Abdul Kadr looks away and wipes away his own tears.

"We fled Chechnya because we did not want to die," he says. "But we cannot stop thinking about what we left behind."