Accessibility links
Israel Accused Of Revoking Thousands Of Jerusalem Residency Permits From Palestinians : Parallels Human Rights Watch says Israel has revoked the residency papers of at least 14,595 Palestinians in East Jerusalem since Israel captured the territory from Jordan in 1967. 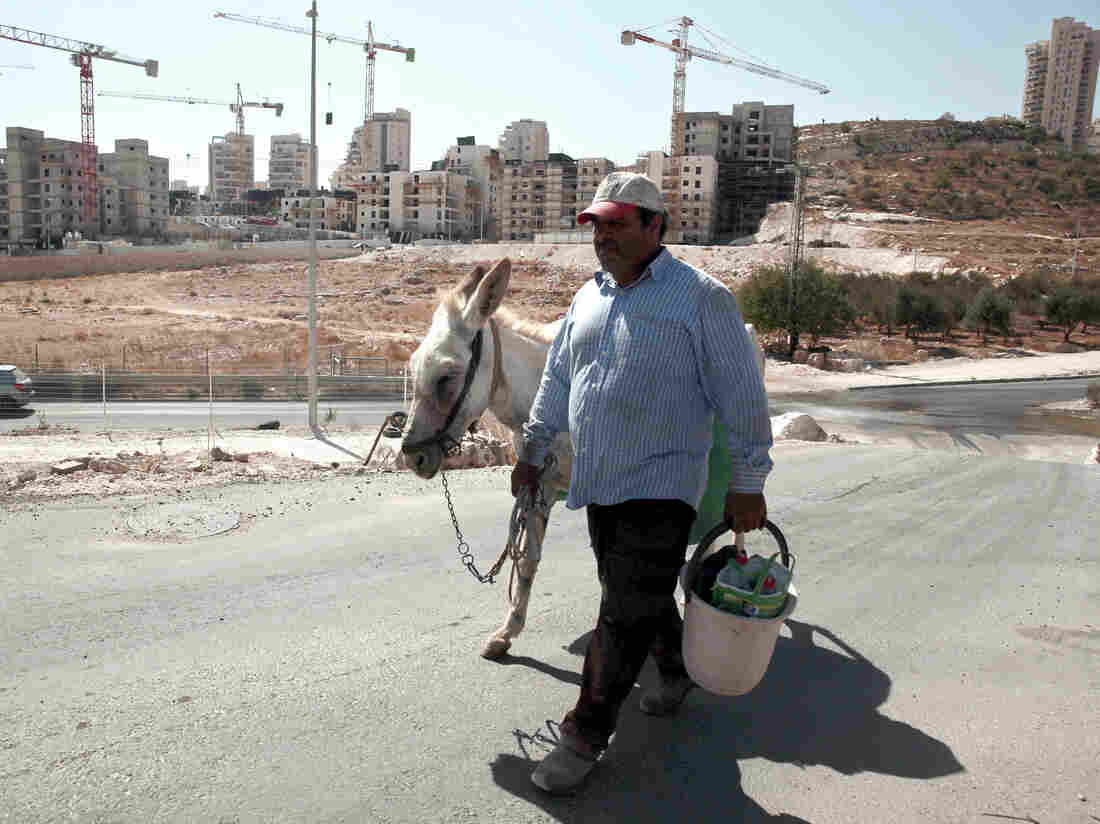 A Palestinian man walks near a construction site of a new housing unit in a neighborhood in East Jerusalem known to Jewish settlers as Har Homa and to Palestinians as Jabal Abu Ghneim. The Palestinians want East Jerusalem to be the capital of a future state and object to Israeli building there and throughout the West Bank. Israel claims all of Jerusalem as its capital. Mahmoud Illean/AP hide caption 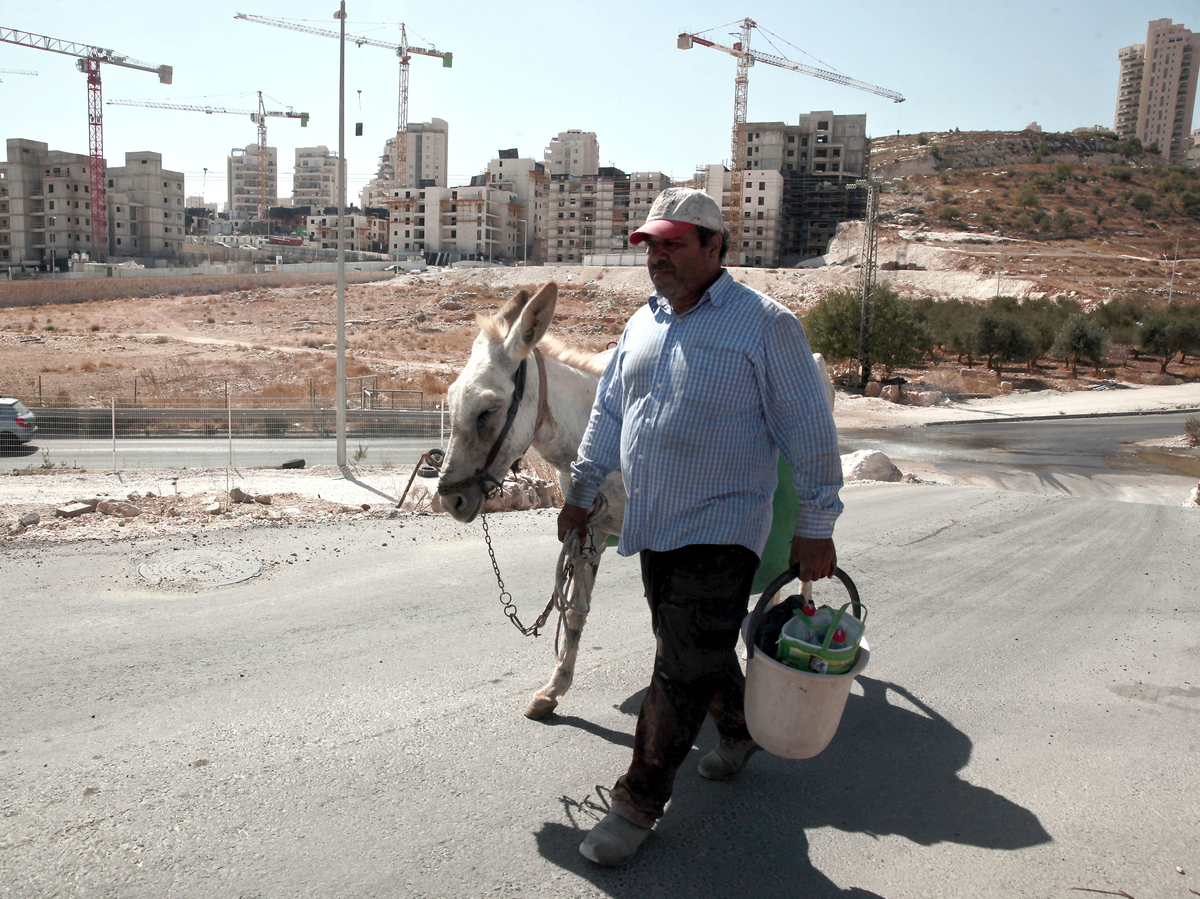 A Palestinian man walks near a construction site of a new housing unit in a neighborhood in East Jerusalem known to Jewish settlers as Har Homa and to Palestinians as Jabal Abu Ghneim. The Palestinians want East Jerusalem to be the capital of a future state and object to Israeli building there and throughout the West Bank. Israel claims all of Jerusalem as its capital.

President Trump has recognized Jerusalem as Israel's capital. But a third of Jerusalem's residents are not Israeli citizens at all. They're Palestinians who hold Israeli residency papers.

Israel has revoked those papers from thousands of Palestinian residents, rights groups say. Jerusalem's mayor, however, would not acknowledge it.

"I'm not aware of anybody that his residency was provoked [sic]," Mayor Nir Barkat said in an interview with NPR's Morning Edition about the revocations. "I think, factually, this is probably not true."

But according to an August report by Human Rights Watch, Israel has revoked the residency status of at least 14,595 Palestinians in East Jerusalem since Israel captured the territory from Jordan in 1967. The group cited data that lawyers and rights groups collected from Israel's Interior Ministry through freedom of information requests and court cases.

In recent years about 100 Palestinians annually have been stripped of their residency rights in the city, though in 2008 alone more than 4,500 Palestinians lost their residency permits, according to data compiled by the rights group HaMoked. The Interior Ministry did not respond to several requests by NPR for comment.

Most of these revocations happened to Palestinians who left the city for an extended period of time, rights group say. Some groups have called it a "silent transfer" of Palestinians out of the city amid a battle over East Jerusalem, which Palestinians want to be the capital of a future Palestinian state.

"It's the opposite of encouraging people to be part of Israeli society. It's to push them out," said Daniel Shenhar, an Israeli lawyer who represents Palestinians whose residency rights have expired. "It's not violent. It's bureaucratic."

After Israel captured East Jerusalem, the Palestinians who lived in that territory did not receive Israeli citizenship, but rather the lesser status of permanent residency. It does not give Palestinian residents of Jerusalem the right to vote in national elections that Israeli citizens enjoy. Yet it does grant them other rights, like access to national health care, social security and the right to work and travel throughout Israel.

But unlike Israeli citizens in Jerusalem, Palestinians native to Jerusalem can lose their residency status and Israeli social benefits if they are away from the city for more than seven years, according to Shenhar. This affects Palestinians who go abroad to study or work, or who marry and have children abroad and wish to move back to their native city with their families.

Khulood Kawamleh, 31, finds herself stateless. She was born in the United Arab Emirates to a Palestinian father from Jerusalem, but was never considered an Emirati national. Her father made frequent trips to his native Jerusalem to maintain his Jerusalem residency papers, and in 1999, when she was 13, her father moved the family to the city so they could become documented, too. But Israel never accepted her and her brother's request for residency permits, and offered no explanation, she said.

She remains undocumented till today, without a bank account, driver's license or any ID. She keeps to a small section of the West Bank on the outskirts of Jerusalem to avoid detection by Israeli security. She dreamed of studying medicine in Germany, but has no travel documents to go abroad. Her lawyer says he's still fighting to get her a permit.

You feel you're in a big cage. Maybe it's a strategy from Israel to make people lose hope in their country, that it's not the place to stay in.

Khulood Kawamleh, 31, a stateless resident with a Palestinian father from Jerusalem

"You feel you're in a big cage," Kawamleh said. "Maybe it's a strategy from Israel to make people lose hope in their country, that it's not the place to stay in."

By contrast, Israeli citizens from Jerusalem can travel abroad, have families, return to the city and register their children as Israeli citizens, said Shenhar, the Israeli lawyer. "I don't need to think twice if I can go study abroad," he said.

Long legal battles have brought changes. Palestinians who wish to return to East Jerusalem are generally able to restore their residency status if they request it, Shenhar said. But they must first live in Jerusalem for at least two years on temporary status, and during that time, if they return with a spouse and children, their families must live without Israeli social benefits, he said.

In the last couple of years, amid a wave of Palestinian stabbings, shootings and car rammings, Israel has stripped residency rights from Palestinian residents of Jerusalem, and their families, if they were found to have carried out such attacks. This revocation policy is currently suspended, Shenhar said.

The Israeli Supreme Court this year set a precedent, saying Palestinians from Jerusalem have a special status and their connection to the city must be considered with regards to residency rights.

But he says the number of citizenship requests Israel has approved has dropped.