Accessibility links
Life After ISIS: One Sister Wants To Rebuild. The Other Can't Wait To Leave : Parallels The Iraqi city of Mosul is now free from ISIS control. Two sisters who attend Mosul University talk about their goals for the future, and the obstacles that remain. Sisters Raffal, left, and Farah Khaled are first-year students at Mosul University in Iraq. They're standing outside the university library, which was burned down, along with most of its books, by ISIS when it controlled the city. Jane Arraf/NPR hide caption Sisters Raffal, left, and Farah Khaled are first-year students at Mosul University in Iraq. They're standing outside the university library, which was burned down, along with most of its books, by ISIS when it controlled the city.

Farah Khaled stands in front of the scorched and twisted steel beams of the destroyed Mosul University library. Red and green ribbons stand out against the blackened metal — remnants of a book drive Khaled and other students organized.

"Their aim was to destroy our culture," Khaled, 22, says about ISIS. "To destroy every ancient thing, every beautiful thing."

But they didn't destroy Khaled, who is irrepressible.

She and her sister, Raffal Khaled, 19, are both in their freshman year at Mosul University. Like many of the students, Farah is three years behind schedule.

The sisters were lucky in many ways — children of middle-class parents who lost neither their home nor family members during the reign of ISIS and the brutal fighting that liberated the city last year.

But in many ways their lives just stopped when ISIS took control and declared the northern Iraqi city the capital of its "caliphate" in 2014.

"It was like we were in a cage," Farah says. Women could go out in the street only if they were completely covered, including their hands and faces. If there were any infractions, such as not wearing gloves or wearing cosmetics under the black veil, their brother or father would be taken in and punished.

So the sisters stayed home. Farah read. Among her favorite books were novels by Agatha Christie, who once lived and wrote in Mosul. They secretly watched Hollywood movies. Farah listened to music — writing the lyrics to songs by Enrique Iglesias and other pop stars over and over in notebooks to improve her English.

The novels, the movies, the music, the cellphones — all of that was forbidden by ISIS. Neighborhood boys would go around knocking on doors to warn people if one of the ISIS militants was approaching. 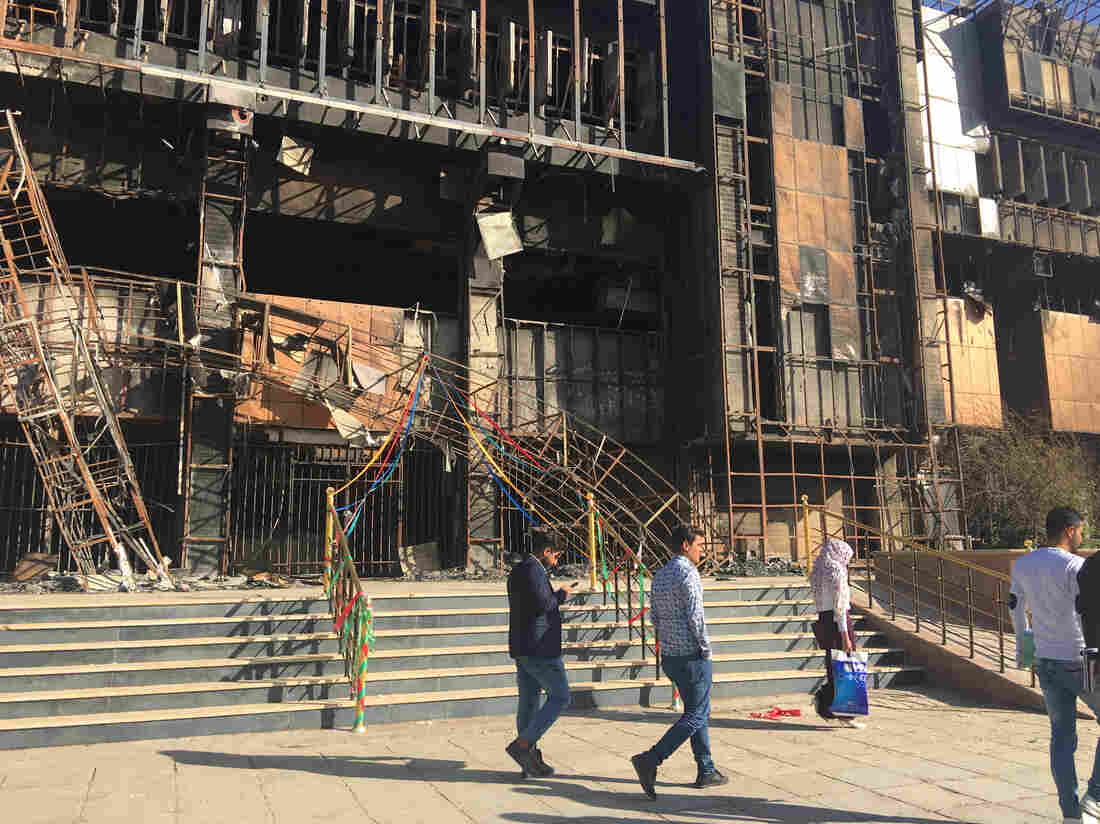 Farah Khaled is part of a volunteer group helping to collect books for a new library in Mosul. She says now that ISIS is gone she wants to be free to wear what she wants and marry whom she wants. "There is no freedom here," she says. "I want to leave Iraq." Jane Arraf/NPR hide caption Farah Khaled is part of a volunteer group helping to collect books for a new library in Mosul. She says now that ISIS is gone she wants to be free to wear what she wants and marry whom she wants. "There is no freedom here," she says. "I want to leave Iraq."

Even books on Islam that did not conform to ISIS ideology were banned. Farah says her mother wrapped her most valuable books in plastic and buried them in the garden.

With ISIS gone from Mosul, Farah and Raffal are eager to throw off the oppression and get on with their lives.

"After ISIS, everyone wants to make their life better — to get out of the bad period we were in. So we all want to move on ... to make something for ourselves," says Farah.

But the sisters see their futures very differently.

"I want to travel — I want to live in America or Australia. I love those countries, I love everything there ... and I hate Iraq. Every single day I hate it more and more. There is no freedom here, particularly for girls," she says, the words she learned from Western music tumbling out with the passion of someone who has glimpsed another horizon.

Farah is dressed fashionably but conservatively. Her black headscarf matches the piping on her burgundy fitted jacked.

In her imagined life in the West, Farah would keep the headscarf but wear jeans in public without fear of people talking behind her back. Farah Khaled, 22, wants to leave Iraq and travel to Western countries like America and Australia.

"If I wore jeans [here] everyone would say, 'Oh look at her, look at how she is dressed, why do her parents let her dress like that?'" she says. "They would keep talking and talk and talk."

And in the West, Farah says she would be free to marry the man she loves. That man happens to be a fellow student. His father, though, has decided that Farah, who plans to work outside the home, is an unsuitable wife for his son and he's found another young woman for his son to marry.

"They want a girl who stays at home and raises children and cooks — a normal lady. They hated Farah," says Raffal. She says her sister spends hours crying. She says the young man was so miserable he ran away to Turkey to avoid marrying another woman, but his parents forced him back. "He still loves Farah and he calls her on the phone without his parents' permission," Raffal says.

"Marriage is a huge problem here," Farah says bitterly. "They force you to marry someone you don't like, who you don't love, you hate."

Farah is trying to focus on her studies. She had been in the college of engineering but she says her "passion" is pharmacy and she has switched to a technical college.

Raffal wants to stay in Iraq. The family currently lives in eastern Mosul. But Raffal wants to return to their home on the west side of Mosul, where they lived before ISIS seized control of the city from the Iraqi army in June 2014. Western Mosul was almost completely destroyed during the battle to drive the militants out three years later.

"I love Iraq," the younger of the sisters says. "I love staying in Iraq and I think I am going to make Iraq a better place — me and my friends and people my age."

Raffal says young people don't care about money or power the way the older generation does in Iraq.

Her passion is to be a dentist. Her grades are high enough that she could become a physician — considered a more prestigious career. But she has decided otherwise.

"I think if I become a doctor I am going be a normal [medical] doctor because I don't like it, but if I became a dentist I'm going to be the best dentist in Iraq," she laughs.