Accessibility links
North And South Korea Reach Breakthroughs In First High-Level Talks In 2 Years : Parallels The two sides announced further dialogue to ease tension between them, but the North still insists any talk of nuclear weapons is off the table. 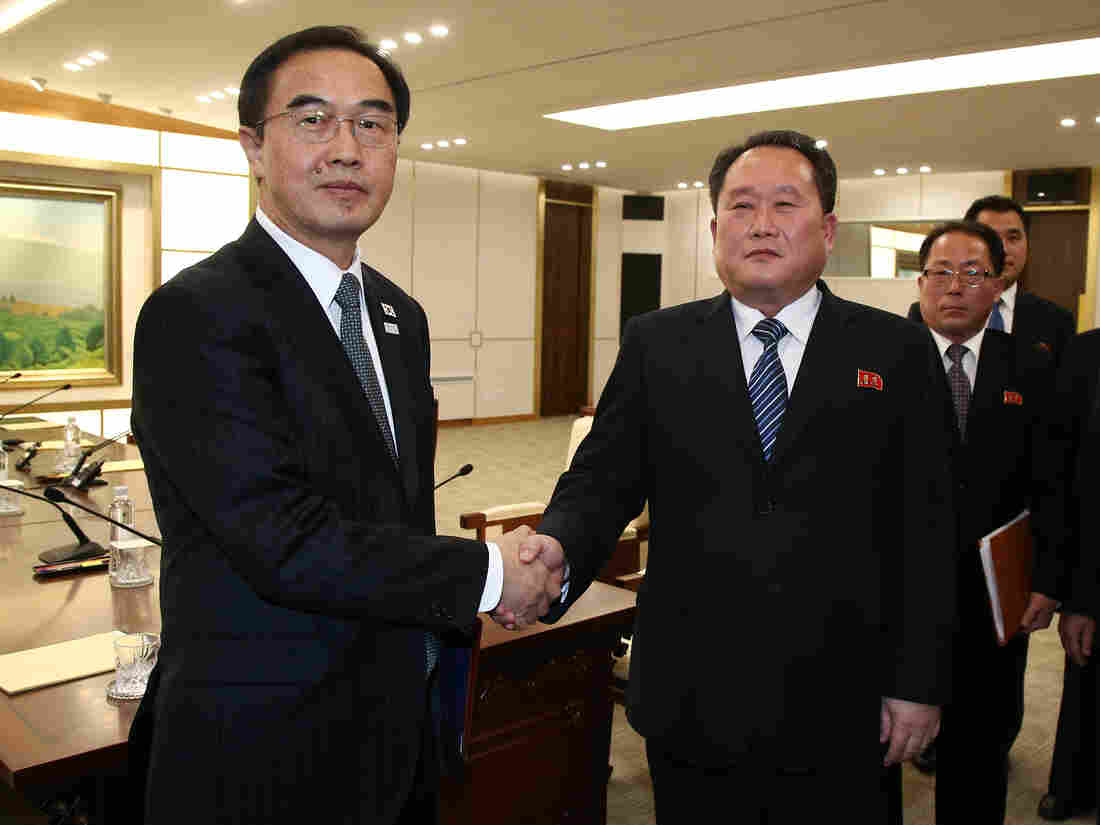 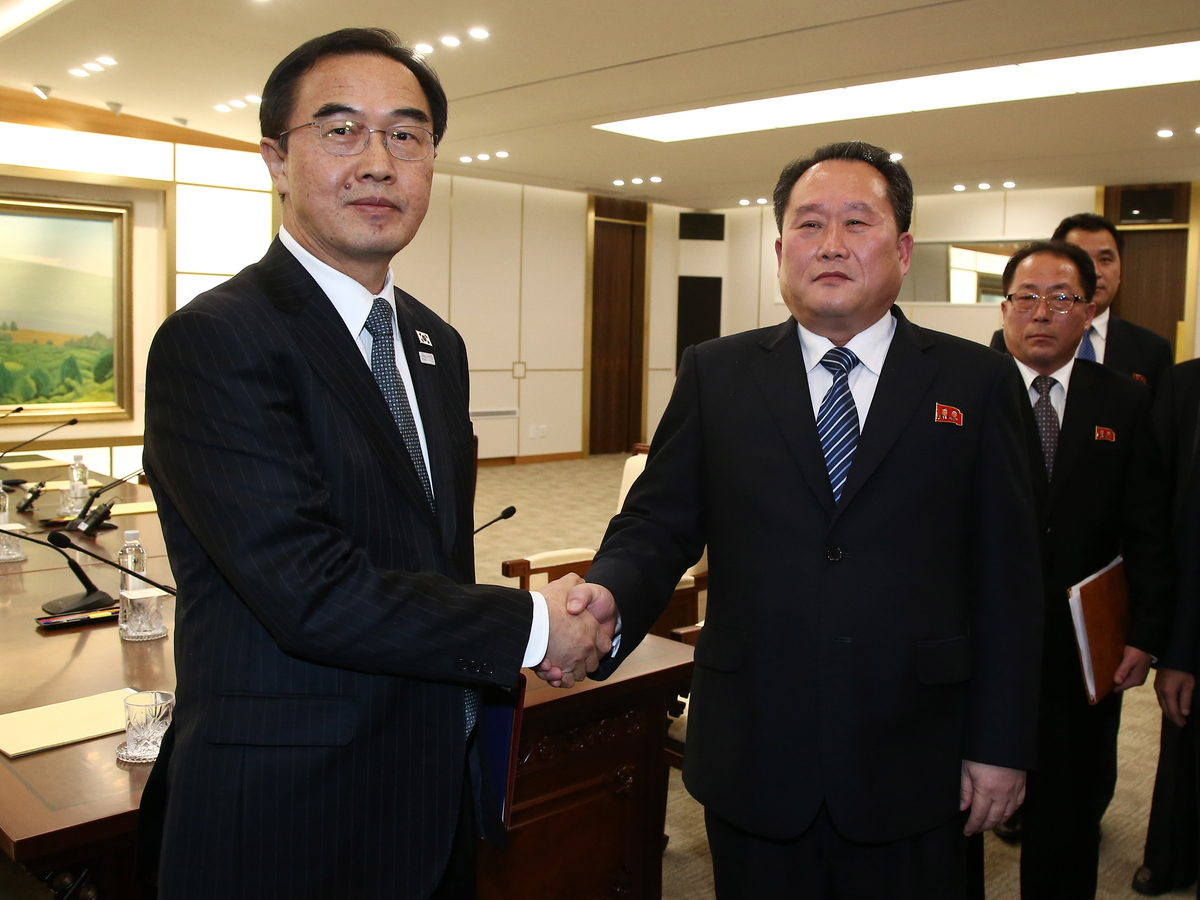 Cocooned by cameras, North Korea's negotiating team crossed the border Tuesday by foot, walking about 100 yards to a conference building for the first high-level talks with South Korea in two years. Seated across from one another at a long rectangular table, diplomats from both sides expressed the need to improve frosty ties.

Early into the talks, North Korea agreed to send a delegation to the Winter Olympics next month in Pyeongchang, South Korea. About 11 hours of negotiations later, the two sides announced even more: future military talks, reinstatement of a hotline and other dialogue to ease tensions between the countries.

Progress around the Olympics — beginning Feb. 9 — itself is a feat. The North pledged to send a big delegation of athletes, officials, spectators, a press corps, performers and a cheering squad. It will mark the first time the North takes part in the Winter Games since 2010 in Vancouver.

This is the first time South Korea is hosting the Winter Olympics. When it hosted the Summer Olympics in 1988, the North boycotted the Seoul Games and was accused of bombing a plane to sabotage them.

In the Korea Talks, Why Kim Jong Un Can't Lose

South Korea is not alone in its concern of how North Korean leader Kim Jong Un might behave when all eyes are on the games.

Analysts say the North entered the talks at an advantage.

"The South Koreans are extremely interested in making sure they go off without a hitch," says Ian Bremmer, who heads risk consultancy the Eurasia Group. "If you're North Korea, you recognize you really have South Korea over a barrel here, because they really want not to have escalation vis-a-vis North Korea and the United States."

South Korea wanted the talks to widen to include key security concerns. But despite reports the South raised the issue of Kim's nuclear program, the North's delegation insists that those concerns are irrelevant to inter-Korean relations — claiming their country wouldn't target South Korea anyway.

"All our weapons including atomic bombs, hydrogen bombs and ballistic missiles are only aimed at the United States, not our brethren, nor China and Russia," said negotiator Ri.

Still, some observers see potential for an opening for the U.S. government.

"The Trump administration needs to find a way to use the opportunity of improved inter-Korean relations to get in there and do some serious diplomatic work on how do you lower the tension, [such as] how do you convince the North Koreans to agree to some limits and suspension of the [nuclear and missile] program and what are you going to offer them in return?" said John Delury, a North Korea watcher and professor at Seoul's Yonsei University.

The U.S. State Department said in a statement that it "remains in close consultations with [South Korean] officials, who will ensure North Korean participation in the Winter Olympics does not violate the sanctions imposed by the UN Security Council over North Korea's unlawful nuclear and ballistic missile programs."

The United Nations also welcomed the progress made in the meetings, including the plans to "work to ease military tensions, hold military-to-military talks, and reopen the inter-Korean military hotline."

For now, the fact the two Koreas are meeting at all helps tamp down tensions that have risen over Pyongyang's improving nuclear and missile capabilities.

Reopening a disconnected phone hotline in the Yellow Sea off the Korean Peninsula's west coast, where hostilities have escalated in the past, is a positive step toward defusing tensions, according to Bremmer of Eurasia Group.

"You just generally want antagonists talking to each other," Bremmer says.

For many in South Korea, the new opening with the North represents a hopeful sign for what is still a dangerous situation.

"It reduces a certain set of risks. It doesn't solve core problems, but it does reduce risks, so that's a net positive right off the bat," Delury says.

South Korea is hoping that the future conversations will start the path of solving those core problems.