Accessibility links
In France, A Debate About Kissing A Traditional Custom Goodbye : Parallels Mayor Aude Picard-Wolff told 73 municipal counselors she would no longer greet them with the customary two-cheek kiss, known as la bise, which she said wastes time and is unhygienic and sexist.

In France, A Debate About Kissing A Traditional Custom Goodbye

In France, A Debate About Kissing A Traditional Custom Goodbye 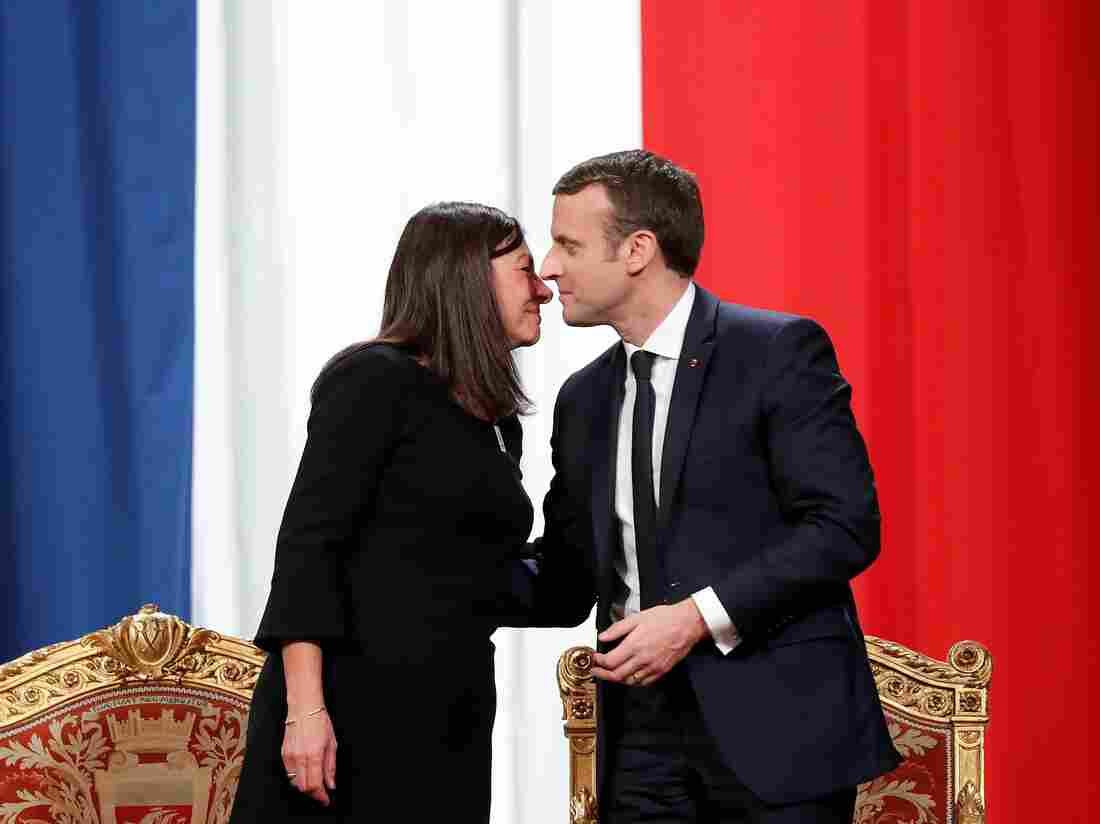 French President Emmanuel Macron kisses Paris Mayor Anne Hidalgo at Paris' city hall after his inauguration last May. Another French female mayor told her local council members in December she would no longer greet them with the traditional two-cheek kiss but, rather, with a handshake. Charles Platiau/AFP/Getty Images hide caption 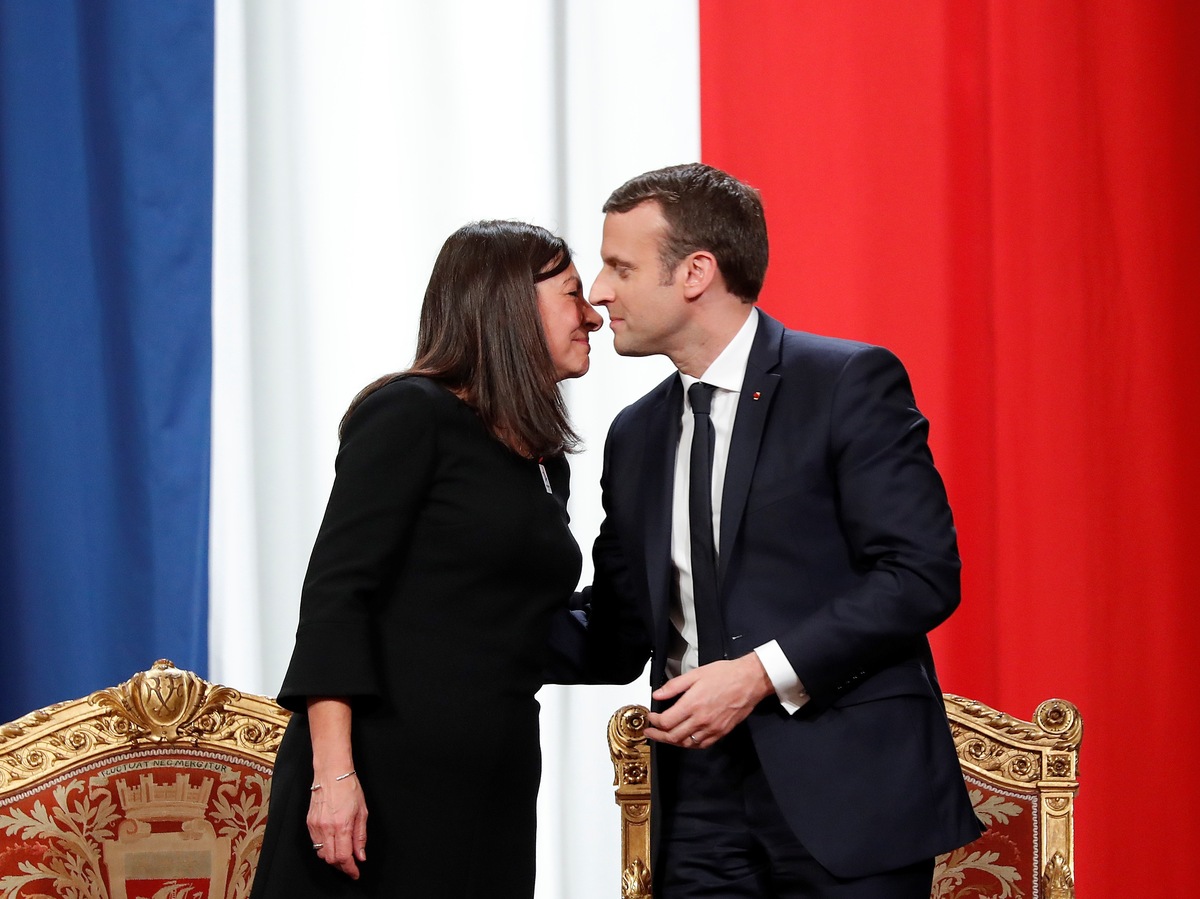 French President Emmanuel Macron kisses Paris Mayor Anne Hidalgo at Paris' city hall after his inauguration last May. Another French female mayor told her local council members in December she would no longer greet them with the traditional two-cheek kiss but, rather, with a handshake.

The fallout from the Harvey Weinstein scandal has been felt far and wide. As women continue to speak out against sexual aggression, the #MeToo movement has ended a few careers. Many people in France now wonder if it could also topple a longstanding social custom — the two-cheek kiss known as la bise.

In December, the female mayor of Morette, a small town in western France, fired off an email to 73 municipal counselors, telling them, "From now on, I would prefer to shake hands, like men do."

Mayor Aude Picard-Wolff said she already hated doing the bise at work because it was a waste of time and unhygienic. But, she told The Local news site, "It also shows an inequality between men and women."

That's because while it is customary for women in France to greet both men and women with a kiss on each cheek, men generally reserve la bise for close male friends or family.

La bise is not just a greeting for social settings, though. In offices across France, co-workers often begin the day kissing each other's cheeks.

Nadege Azor, 24, works for a large insurance firm in Paris. She says she kisses her immediate colleagues every morning, but no one higher up.

"I do the bise with my colleagues at the same level as me, so it feels natural," she says. "But I shake hands of directors higher up. There's a hierarchical thing."

Azor says in her previous job, the director kissed everyone.

"It was a little weird to kiss the director," she says. "She was a woman, so there was no sexual aspect about it, but because of the hierarchy, it was a bit uncomfortable."

Anne Guerlain, a 55-year-old Parisian, says she enjoys kissing her co-workers every day because it brings them closer. But she understands there are people who don't enjoy the physical contact.

Usually it's foreigners who object to the bise, as many aren't entirely comfortable with the greeting.

And the number of kisses can be confusing. It can be two, three or four, occasionally even five, depending on which part of the country you're in.

As an intern in a French office in the 1990s, I was astounded every morning as colleagues made the rounds kissing each other. Even then, there was one young French woman who goodheartedly said she didn't do the bise because it was a waste of time.

Now, in the wake of the Weinstein scandal, there is a new impetus for not kissing work colleagues.

Picard-Wolff told Elle magazine she's received many letters of support from women after news emerged about her email to the council members. They have congratulated her, she says, for having the courage to say out loud what so many are thinking.

"Many don't want to do la bise," Picard-Wolff told Elle, "but don't dare say anything."

Paris-based software engineer Nicolas Pessard says they don't kiss at his mostly male firm. "But in my wife's office, they do, and she doesn't like it," he says. "But she feels like she has to do it or people will feel she is unsociable."

Pessard says it might not be a bad thing to stop doing the bise in the workplace, and then no one will feel pressured.

Meanwhile, another debate is surging in France, along with the one over the bise.

On Tuesday, about 100 prominent French writers, academics and actresses, including Catherine Deneuve, signed an open letter in Le Monde denouncing the wave of what they called "puritanism" sparked by the Weinstein scandal.

The signatories said sexual crimes should not be confused with flirting, and men should have the right to hit on women. They said the backlash had turned into a witch hunt against innocent men, whose only crime was to touch someone's knee or try to steal a kiss or perhaps clumsily say something intimate to someone who did not share their affections.

The reaction was swift from prominent feminists, who responded angrily and accused their sisters of trivializing sexual violence and chipping away at the gains women have made.

Frederic Rouvillois, a law professor at Paris' Sorbonne University and author of The Nostalgic Dictionary of Politeness, says contrary to popular belief, the bise is a very recent custom.

"Many people have the false impression that it's always existed, but it wasn't around 40 years ago," he says.

"The students would kiss each other in the courtyard of the school," he says. "Then it spread through the rest of society."

Before la bise, Rouvillois says people shook hands or bowed their heads when meeting. He doesn't think it inconceivable that the bise could be the next casualty of the #MeToo campaign. More entrenched customs have certainly fallen.

"Up until the 17th century, French people kissed each other on the mouth when greeting," says Rouvillois. "In all milieus. Even at court, the queen was kissed by her courtiers. And then Louis XIV said, that's enough! And everyone was happy to end it."