Accessibility links
Environmentalists Warn Of Mediterranean Pollution From Lebanon Land Reclamation : Parallels A land reclamation project that uses vast amounts of garbage extends hundreds of feet into the sea. "We are fishing plastic," says a fisherman. The country has long struggled to manage its waste. 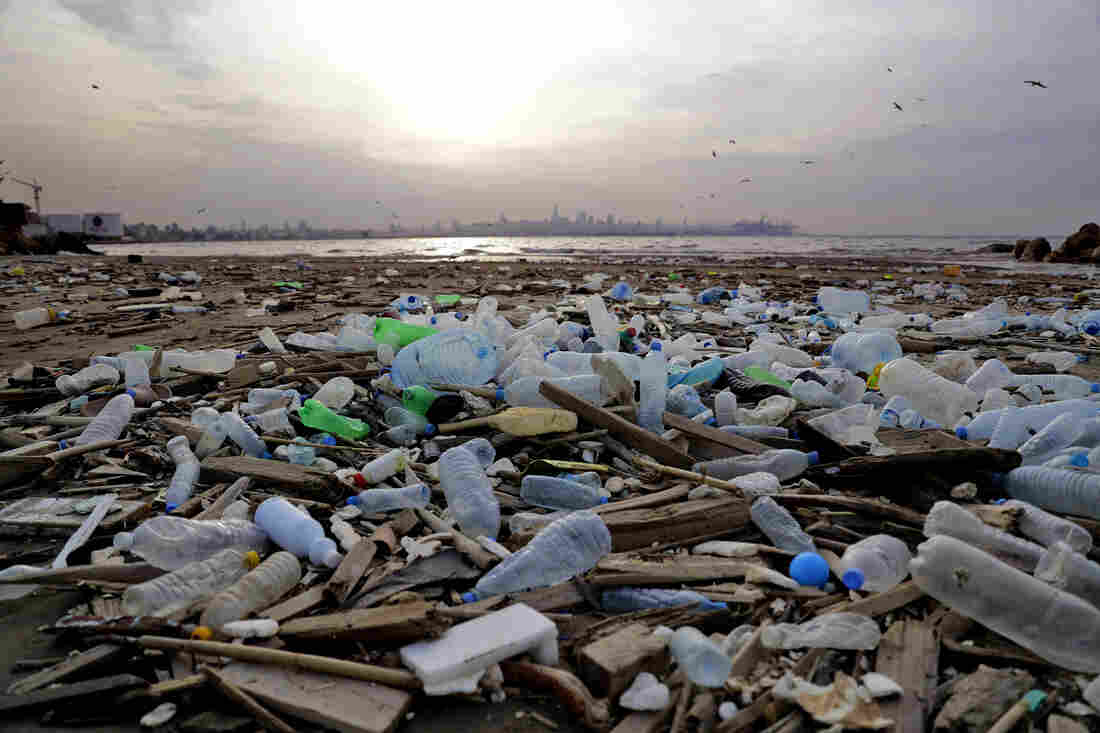 Garbage lies north of Beirut in 2017, after it washed away from a nearby seaside dump. Beirut and its suburbs generate some 3,000 tons of garbage per day. Joseph Eid/AFP/Getty Images hide caption 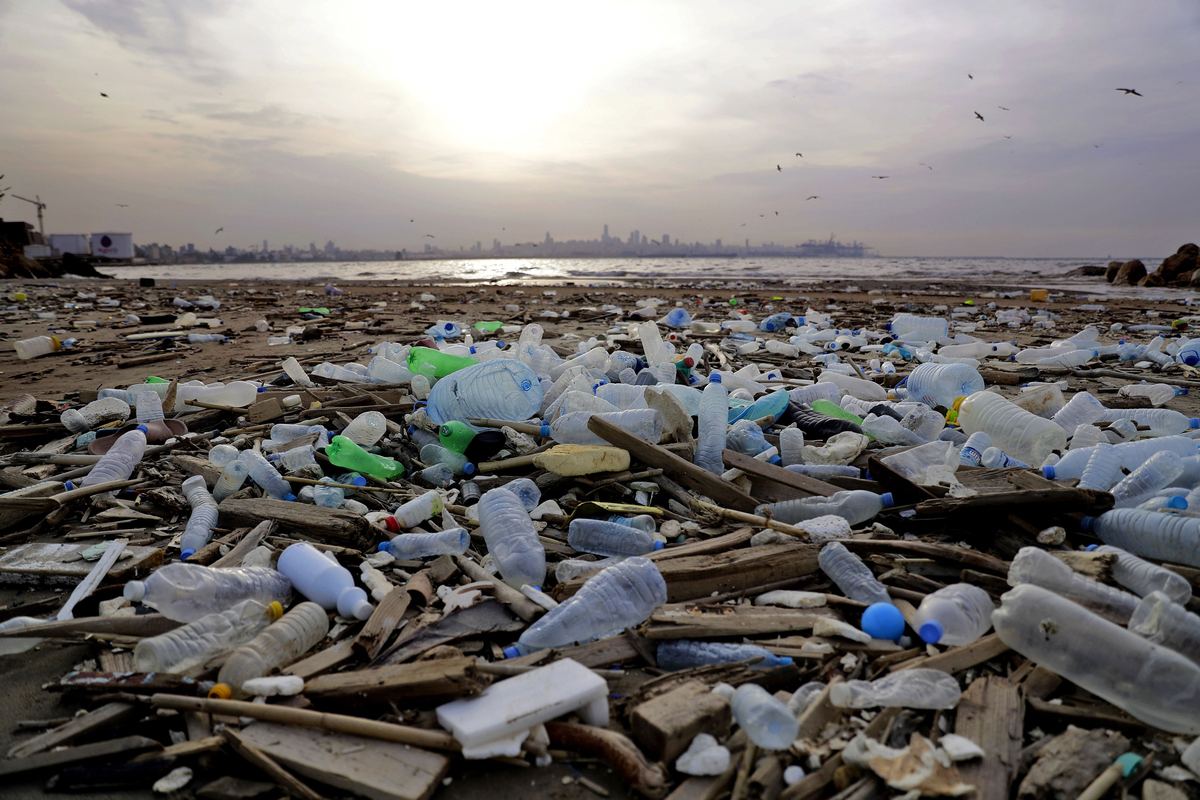 Garbage lies north of Beirut in 2017, after it washed away from a nearby seaside dump. Beirut and its suburbs generate some 3,000 tons of garbage per day.

On a bright, beautiful October day, Lebanese fisherman Emilio Eid is in his boat on the Mediterranean Sea. Lebanon's scenic mountain ranges are clear in the distance.

But the water around him is brown and littered with pieces of floating plastic. He spots bottles, a toothbrush, a used condom. An acrid smell burns his eyes and throat.

There, a huge mound rises out of the water. A steady stream of trucks drives onto it, emptying loads of waste onto compressed trash and dirt extending hundreds of feet into the Mediterranean.

It is a form of land reclamation – the process of adding to the coastline. In this case, the process involves dumping thousands of tons of trash directly into the sea. 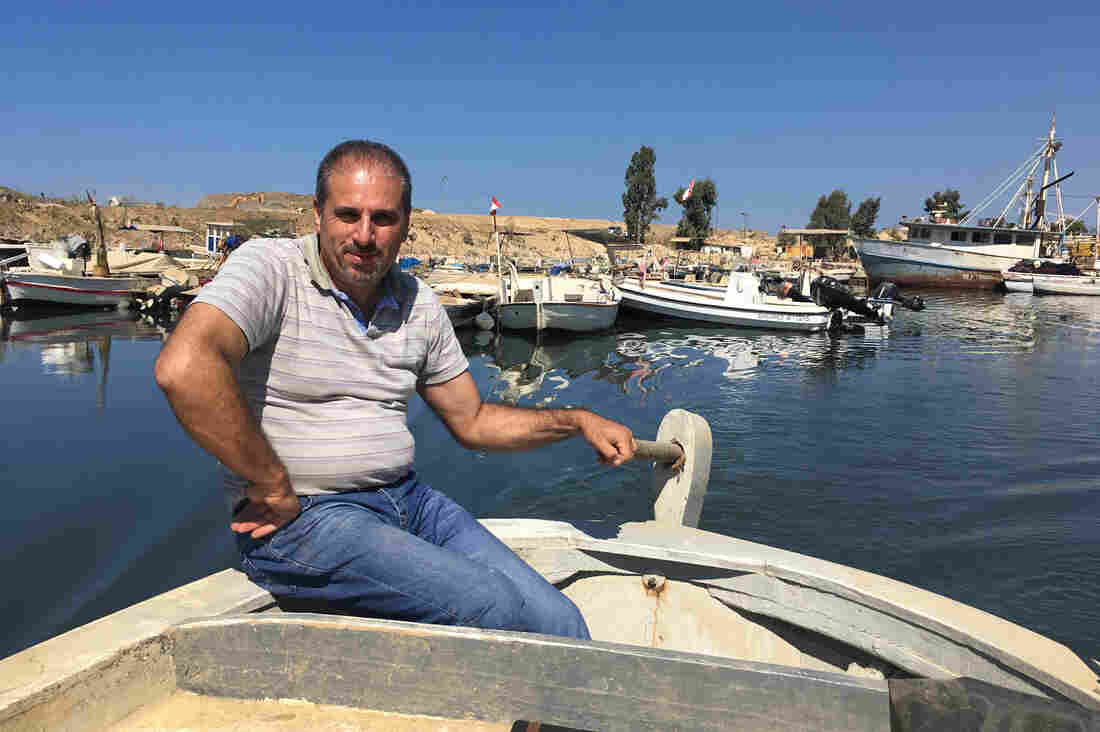 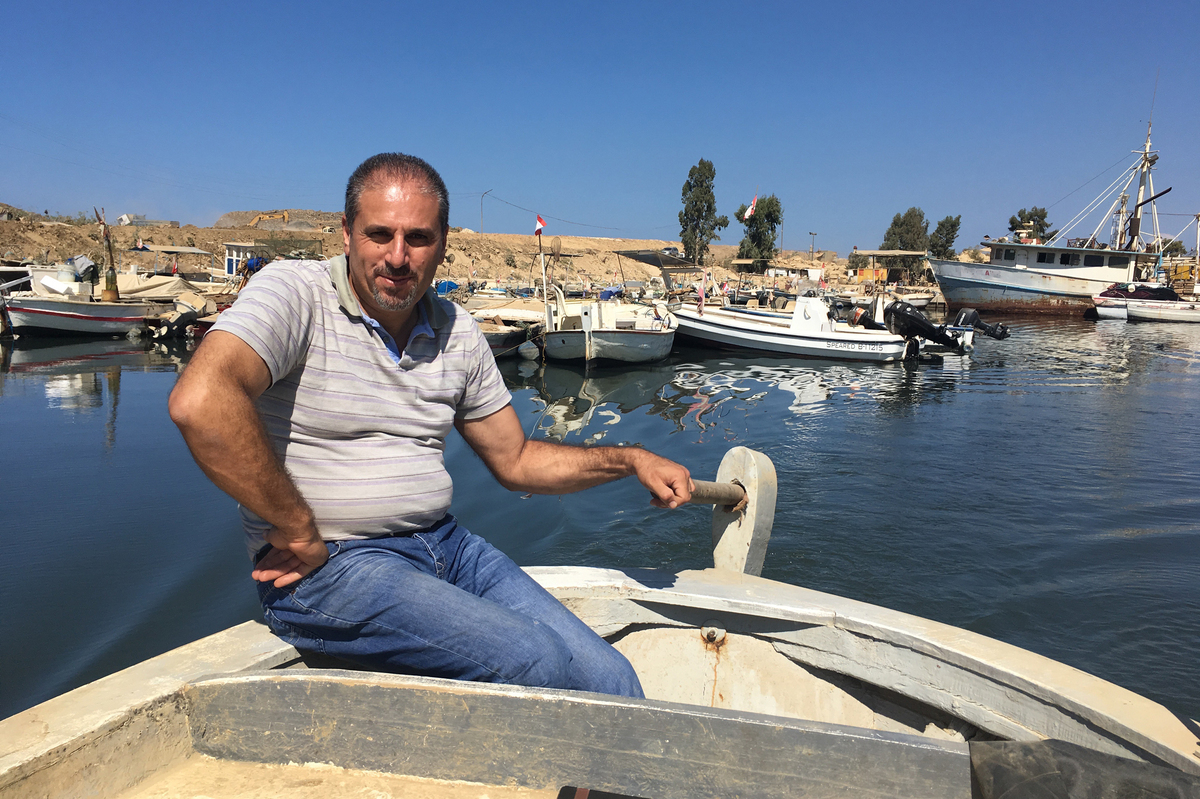 Lebanon is drowning in its own garbage. Beirut and its suburbs alone generate more than 3,000 tons of trash per day, according to government figures. Corruption, bad infrastructure and a weak government have all contributed to dysfunction when it comes to waste disposal. In 2015, the crisis became so severe that trash was left to rot for months on city streets. That sparked massive protests against the government.

Amid Political Dysfunction, Beirut Residents Suffer The Stench Of Garbage

Last year, as temporary landfills bulged, politicians feared protests would erupt again. So they pushed for the land reclamation project, calling it a stop-gap solution.

Plans by the developer, Khoury Contracting Company, were obtained by the Lebanon Transparency Association, the Lebanese branch of Transparency International, which fights corruption. The association showed the documents to NPR.

The project uses trash taken from a nearby dump site as the fill material for creating new land. 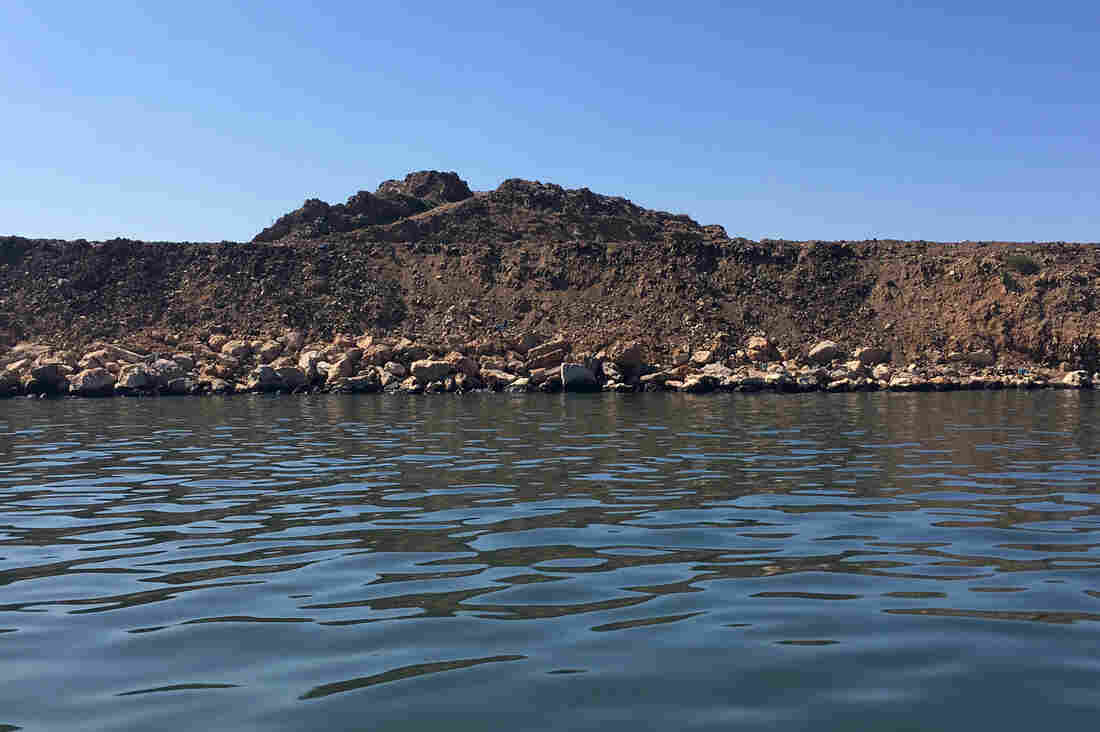 A land reclamation project on the Lebanese coast has been created using the contents of a landfill. Ruth Sherlock/NPR hide caption 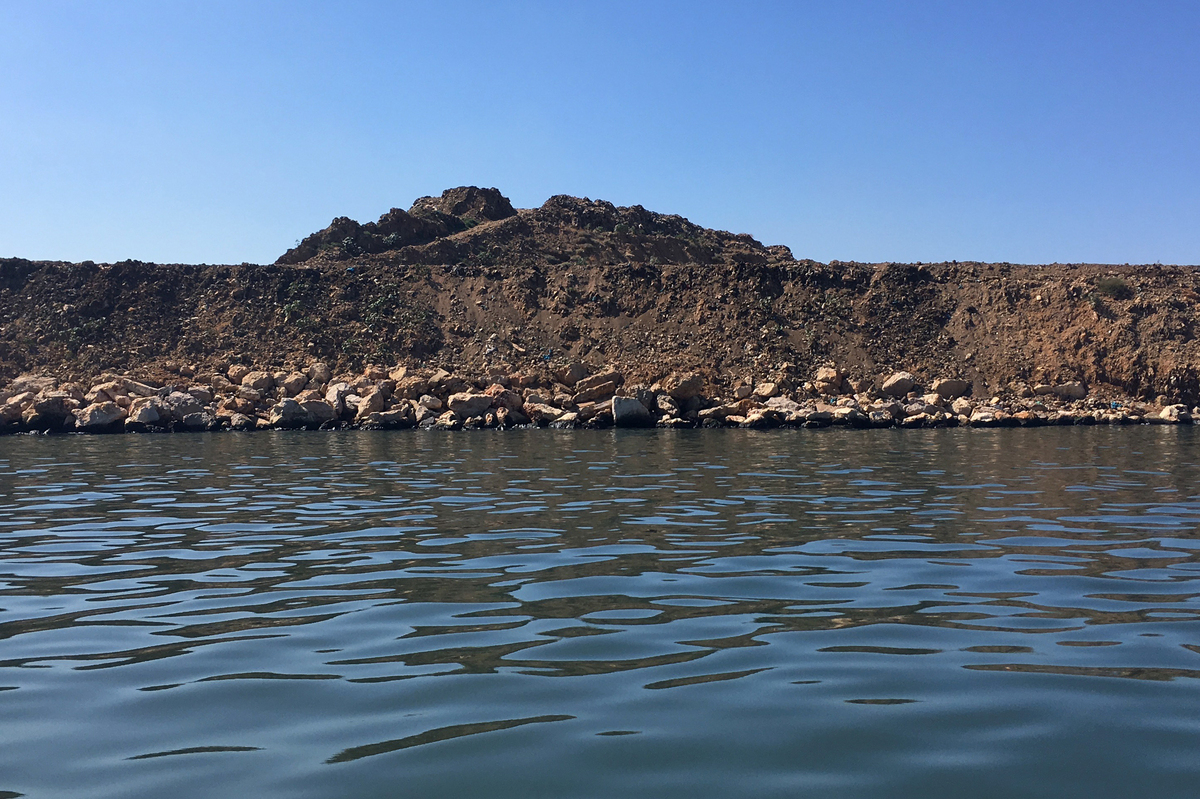 A land reclamation project on the Lebanese coast has been created using the contents of a landfill.

Lebanon's Daily Star newspaper reported in July that "landfill sites will extend hundreds of meters into the sea upon completion, and will have a surface area of 600,000 square meters in total."

This has angered environmental experts from around Europe, who warn it will badly pollute the Mediterranean. European countries including Greece, Italy, Spain and France have coastlines along the sea.

"It really comes down to it being waste management from the Dark Ages. I mean, the whole ethic that we've got something to get rid of, we burn it, we bury it, we throw it in the sea," says Paul Johnston, an environmental scientist with Greenpeace's research laboratory at the University of Exeter in the United Kingdom.

The landfill from where the waste is sourced dates back over 30 years, to the days of the Lebanese civil war. Experts say it contains industrial as well as domestic waste.

The developer's plans describe much of the waste as "inert," meaning material has degraded over time. It says that the leachate – a polluting liquid that seeps out of landfill sites – has already run off.

Environmental experts say that even if the organic waste has degraded and the liquid has run off, the trash that remains still contains materials that are dangerous for marine life.

"I think there's certainly a huge scope here for toxic heavy metals, toxic pollutants like household chemicals, to be mobilized into the marine environment by this operation," said Johnston from Greenpeace. "And then there's obviously the problem with plastics contributing to the overall burden of plastics in the Mediterranean, which is already pretty high."

Some scientists estimate 1,000 to 3,000 tons of plastic are floating on the surface of the Mediterranean, with more added every year.

The developer's original plan includes measures to limit the pollution. The waste was meant to be sorted, using the degraded material — organic waste that has broken down and is less polluting — for the parts of the project that go underwater as the base of the land reclamation project.

But a government official with knowledge of the project, who asked not to be named because he did not have permission to speak to the media, confirmed to NPR that much of the waste used has not been sorted. Environmentalists in Lebanon have made the same allegations.

When NPR approached the site by boat in October, it was easy to see thousands of plastic bottles, tires and other pieces of trash in the fill material. 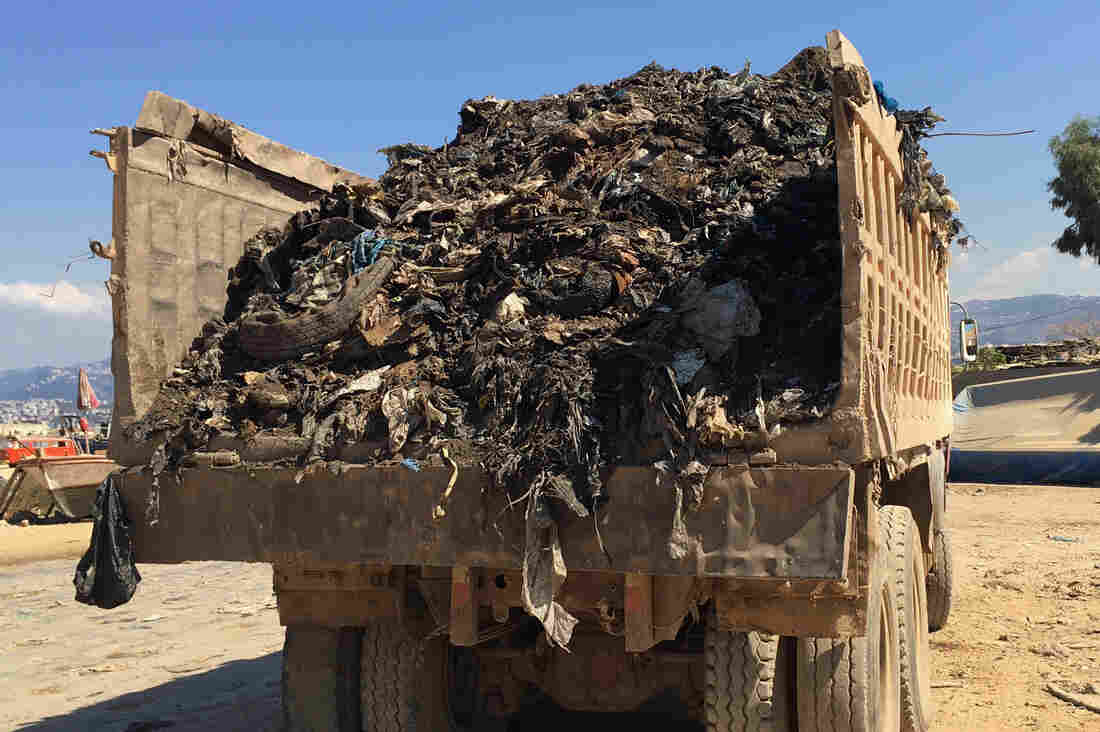 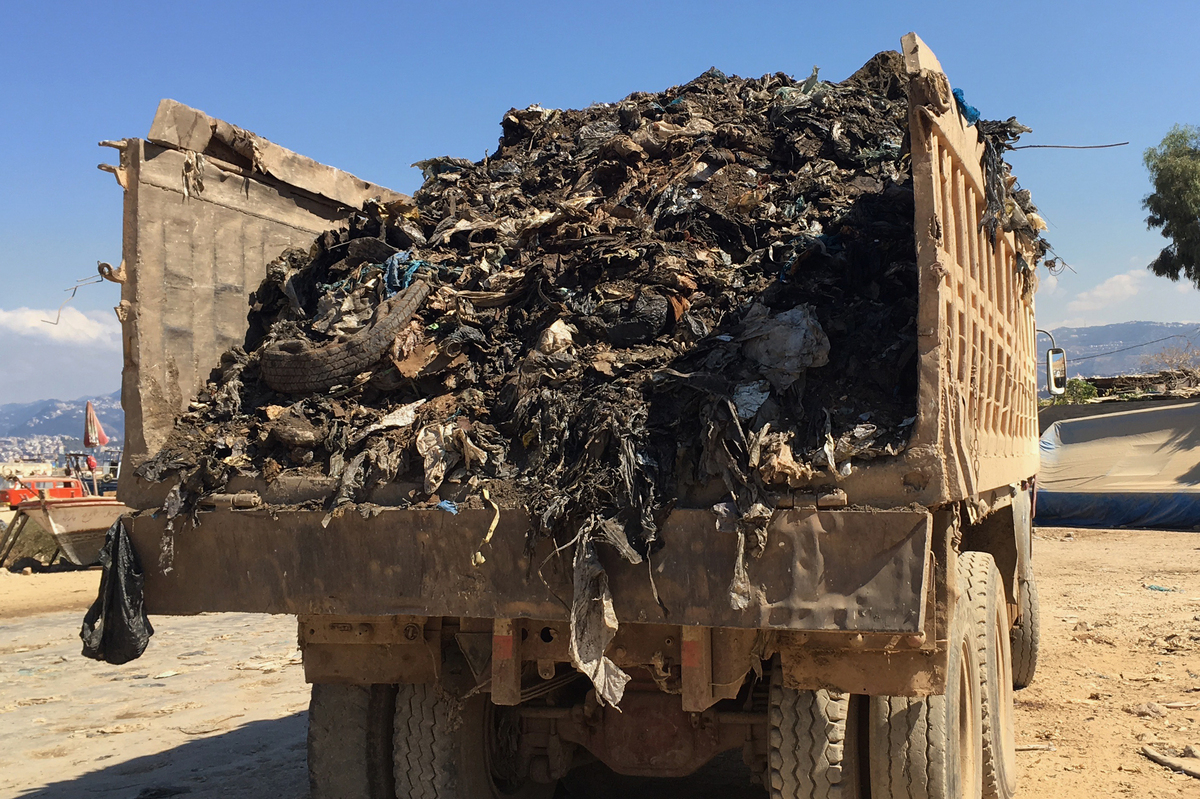 A truck transports waste in Lebanon.

A barrier was meant to fence off part of the sea to prevent garbage from floating away. But construction was delayed over a disagreement with a nearby oil company, which said it would interfere with its underwater pipelines.

The developer resorted to a less effective barrier, using nets in some areas to try to prevent the trash from floating away, the informed official told NPR.

Last summer, environmentalists shared pictures of dirt and trash being dumped directly in the water. It caused a flurry of angry headlines in local media.

The government usually requires an environmental impact assessment before such waste disposal projects can go ahead. But in this case, keen to speed the project through, it allowed the developer to start the project before the study was finished.

A source in the environment ministry who asked not to be named as they did not have permission to speak with the media told NPR that staff in the ministry joke darkly that the project will be finished before the assessment is.

Lebanon's fishermen say they don't need to wait for the results of an environmental study to know the project is polluting the waters they fish in.

Emilio Eid, the fisherman, says he's coming back with a much smaller catch than in years past.

"In this area, the fish all died because of pollution," he says. "Or they left this area and went into deeper water."

The water along this part of the Lebanese coast has long been polluted. There's a much bigger port nearby, and several factories use the area as an outlet for their waste. But, Eid says, the fish stocks have declined dramatically in the last year, since the sea fill project began. It's become so bad that he and other fishermen are suing the developer for destroying their livelihoods.

Eid has worked at a small fishing port near the project almost all his life. Fishing nets are piled on the dock, and Lebanese flags flap from the small wooden boats that bob gently in the water.

Often when he goes out fishing now, he pulls up his nets to find thousands of pieces of garbage, and almost no fish.

"We are fishing plastic," he says.

The developer refused repeated requests by NPR for an interview.

Antoine Gebara, the mayor of Jdeideh, the Beirut municipality on whose coastline the project is partly located, acknowledges there are problems with the way it has been implemented.

"I know – to be honest – that there is something wrong with the way things are done" on the site, he says. "But I'm also well aware that if I want to stop them, I would risk having the garbage pile up in the streets."

Environmental activists believe this is also about building new land that could someday be lucrative to developers and the politicians who back them.

Gebara doesn't dispute this. Asked if this is about money more than trash, he replies: "Of course!"

Other land reclamation projects in Lebanon – ones not made using trash – have generated huge financial capital, he explains. One day, he says, the new land that's being made by this waste can also be used for expensive real estate.

Furious at their own government, environmentalists in Lebanon have looked to other countries to try to help stop the project. They say this is an international problem because countries that share the sea with Lebanon will be affected by its pollution.

"It's really harming the Mediterranean Sea," says Paul Abi Rached, the founder of the environmental group Terre Liban. He says it is wreaking "destruction" on marine life and can't understand why it has not received more attention.

"This is really the most important question," he says, "why all the Mediterranean countries are witnessing this humanity crime, this natural crime. And they didn't move?"

One reason may be that there are not yet effective international legal measures in place to protect against marine pollution.

Lebanon is a signatory to part of the Barcelona Convention, an agreement among Mediterranean countries to protect their sea. But the convention does not yet have a well-developed enforcement mechanism; in most cases, other countries intervene only when a government asks for help. Lebanon has not asked for help in this case since its own government is backing the project.

Politics are another factor. Some diplomats, who asked not to be identified as they are discussing a sensitive matter, say Lebanon's refugee crisis may play a role in other countries' reluctance to get involved in helping to resolve the country's garbage crisis.

Lebanon hosts more than a million refugees from nearby Syria. Many European governments fear more refugees could try to enter Europe, should the Lebanese government stop allowing them to remain in Lebanon.

So, the diplomats say, governments are careful not to do anything that might upset the Lebanese – even on issues that might seem unrelated, like trash management.

In the meantime, though, says Rached, the environmentalist, it's the Mediterranean Sea that will suffer.