Accessibility links
A 'Fraught Time' For Press Freedom In The Philippines : Parallels President Duterte "does not like the press," writes Sheila S. Coronel, dean of academic affairs at Columbia University's journalism school. The Rappler news site is the government's latest target. 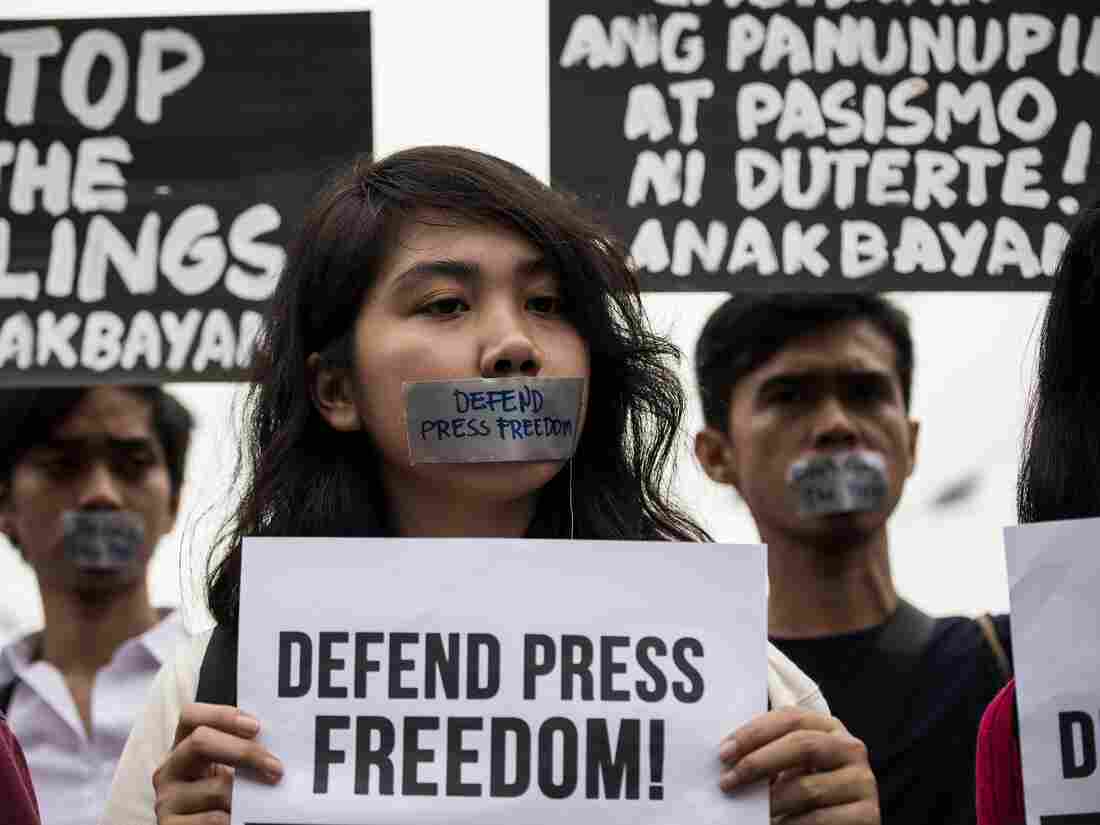 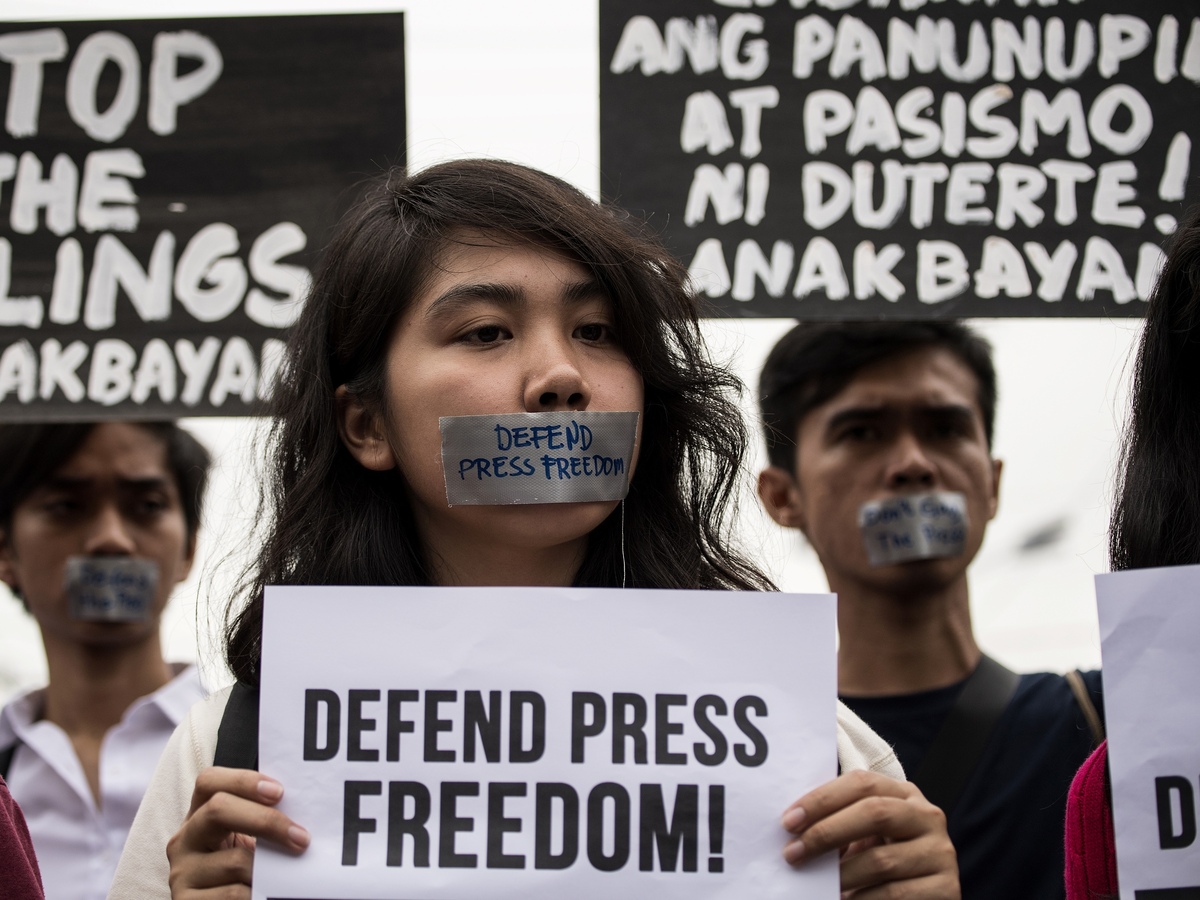 College students protest to defend press freedom in Manila on Wednesday, after the government cracked down on Rappler, an independent online news site.

Philippine President Rodrigo Duterte does not like the press. Stung by critical media reporting, he has in the past months called some of the country's largest media organizations "bullshit," "garbage," "son of a bitch." Journalists, he said, have no shame. They are corrupt fabulists and hypocrites who "pretend to be the moral torch of the country."

But Duterte does not just get mad; he gets even. This week, the Philippine Securities and Exchange Commission revoked the corporate registration of Rappler, an online media startup that has reported aggressively on Duterte's troll army and police abuses in the government's war on drugs. If the order is confirmed by an appeals court, the company may have to shut down. 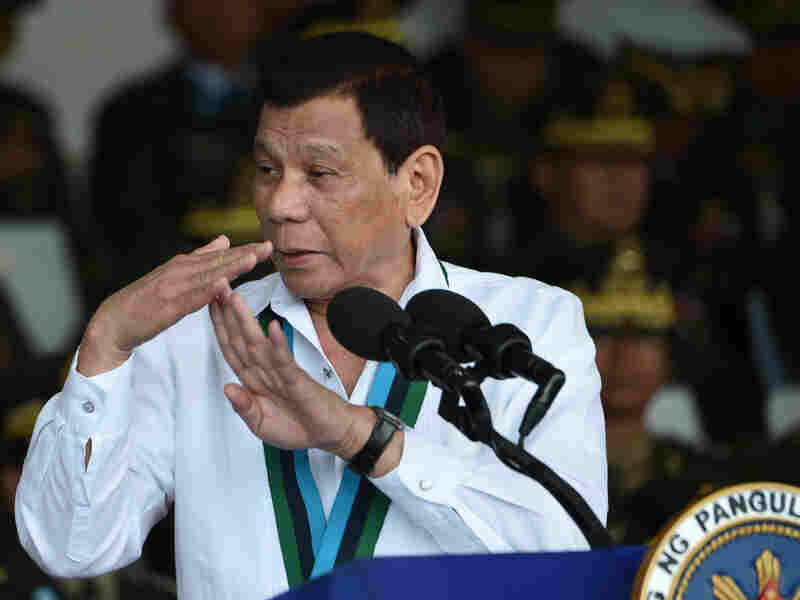 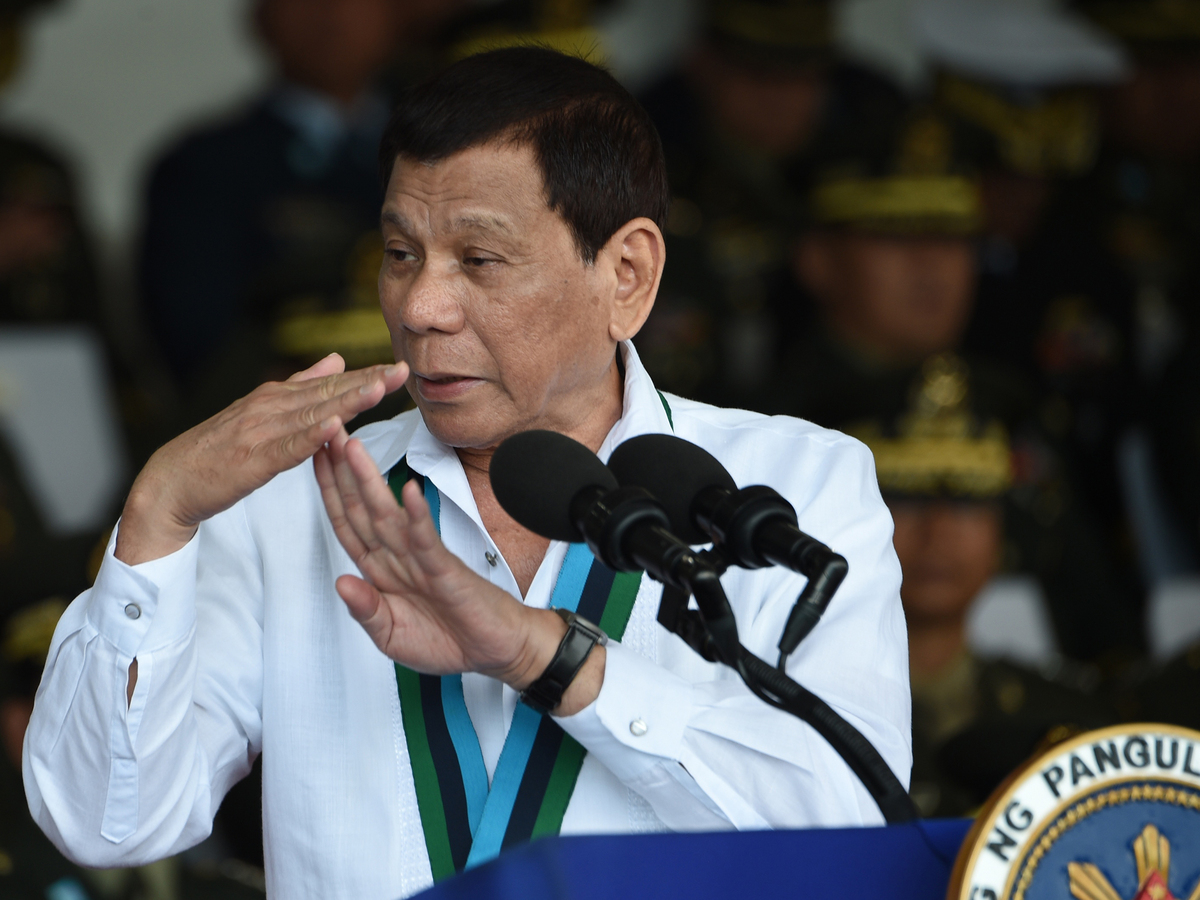 Philippine President Rodrigo Duterte, shown here on Dec. 20 at a ceremony marking the anniversary of the military, became president as the Philippine media were losing prestige and market power.

Threatening as this crackdown is, it's only one arm of a pincer-like assault on the press. Duterte is drawing from the Modern Autocrat's Field Guide to Information Control. The aim is complete encirclement so as to drown out critical and independent voices. Like Vladimir Putin, Turkey's Recip Tayyip Erdogan and Hungary's Viktor Orban, he has launched a two-pronged attack.

One prong is media muzzling through government regulation. In Russia, Turkey and Hungary, autocratic leaders have shut down critical news outlets or transferred their ownership to friendly proprietors. In all these countries, government regulators have hounded recalcitrant media owners with spurious allegations like tax evasion and failure to obtain licenses.

More insidiously, populist leaders have tried to de-legitimize independent and critical media by ridiculing their editorial standards and their claims to a moral high ground. The press, said Dutere, "throw[s] garbage at us ... [but] How about you? Are you also clean?"

Demonization by government — something President Trump also deploys against media outlets he dislikes — is just one tactic. The other is letting loose an army of trolls, bloggers on the state's payroll, propagandists and paid hacks who ensure the strongman's attacks against the press are amplified in newspaper columns and on the airwaves, on social media and fake news sites.

In 1972, when Ferdinand Marcos declared martial law, he closed down all newspapers and broadcast stations and hauled dozens of journalists to jail. When the presses and broadcast networks reopened, they were all owned by Marcos kin and cronies and were censored by the presidential palace. The flow of information was strictly controlled: There were only three daily newspapers and a limited number of TV and radio stations. 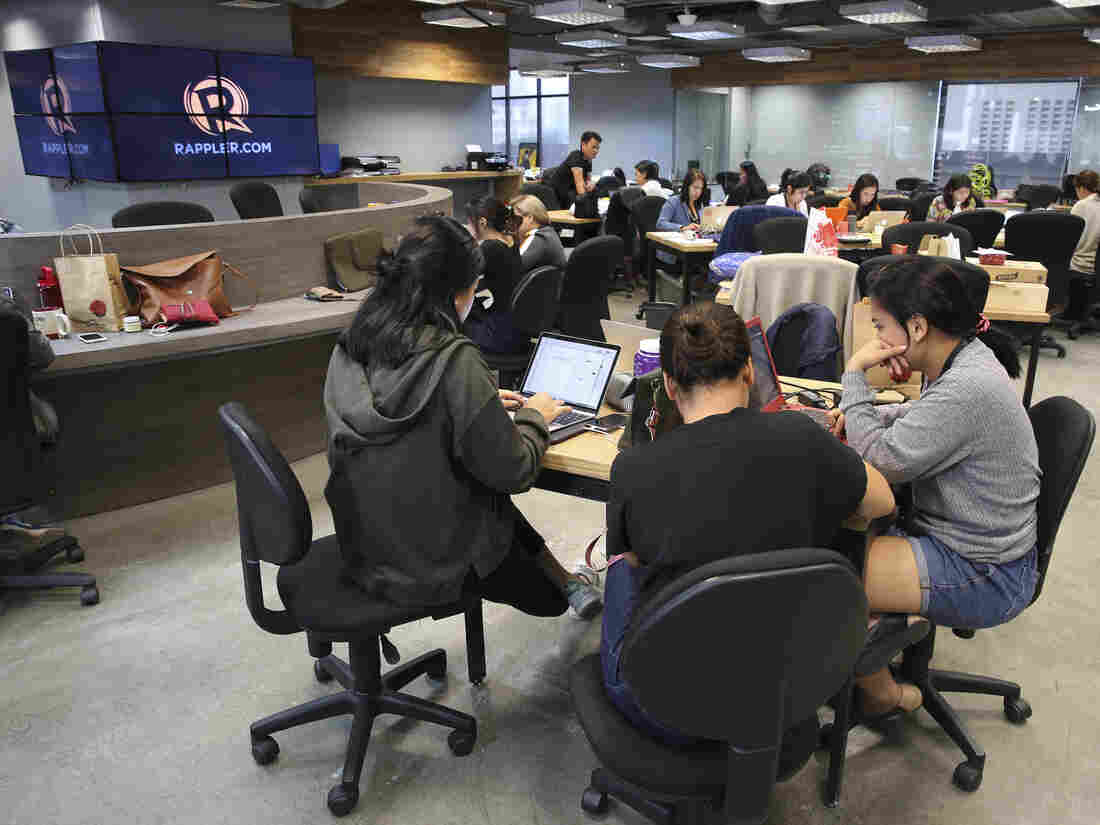 Employees of Rappler, an online news outfit known for its critical reporting on Philippine President Rodrigo Duterte, continued to work in their office in Manila on Tuesday. The Philippine Securities and Exchange Commission revoked Rappler's corporate registration this week. Aaron Favila/AP hide caption 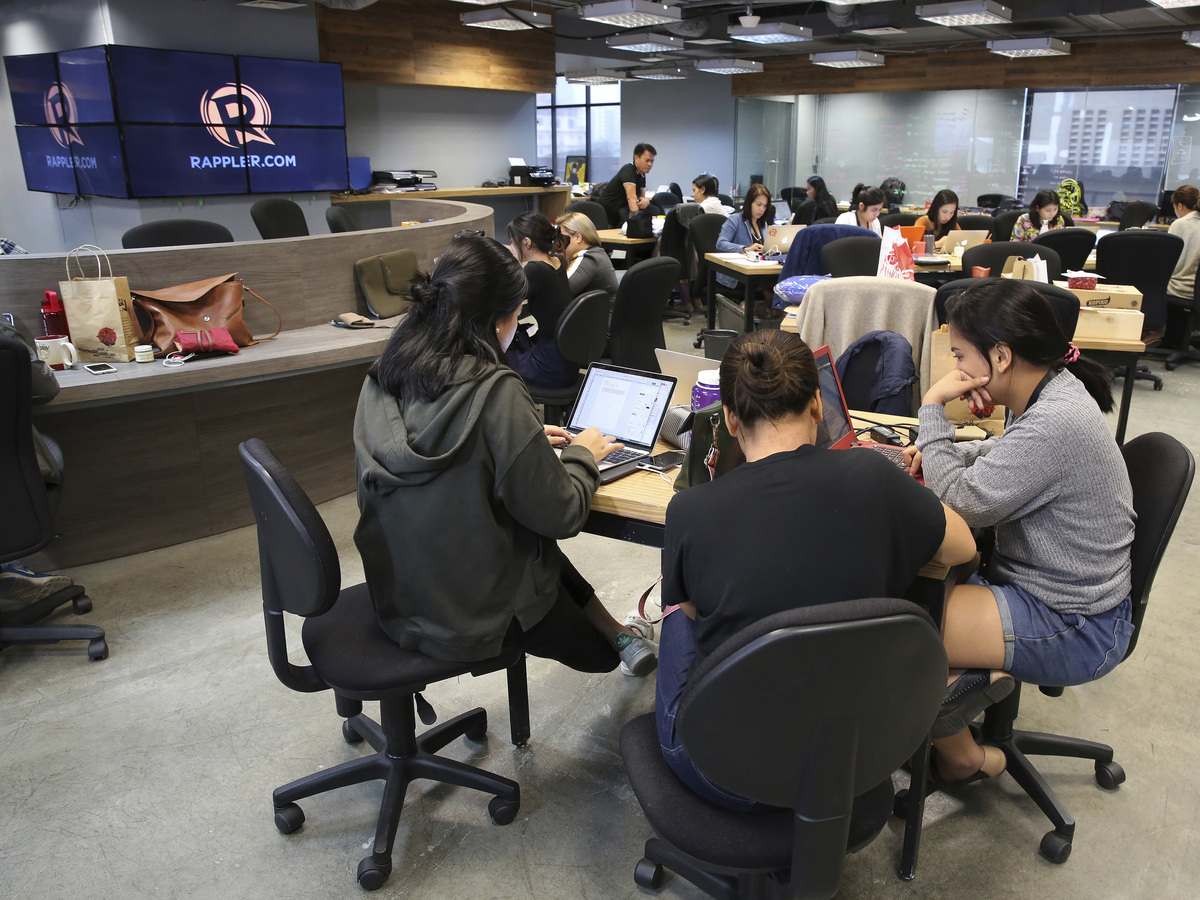 Employees of Rappler, an online news outfit known for its critical reporting on Philippine President Rodrigo Duterte, continued to work in their office in Manila on Tuesday. The Philippine Securities and Exchange Commission revoked Rappler's corporate registration this week.

Duterte is an admirer of Marcos, but he is using a 21st century playbook for media control. The strategy is no longer restricting information flows, but flooding the information space with disinformation and propaganda while also attacking legitimate purveyors of the news.

Last year, the president launched blistering assaults against two news organizations that reported allegations he had stashed millions in secret bank accounts. As he turned up the heat, the owners of the Philippine Daily Inquirer, the country's second largest newspaper, announced they would sell the daily to a businessman chummy with the president. Duterte also tightened the screws on the top television network, ABS-CBN, threatening to block the renewal of its franchise and to sue its owners for failing to air campaign ads that he said he had already paid for.

Rappler was investigated supposedly because it violated the ban on foreign media ownership. The pioneering startup issued $1 million in securities, called Philippine depository receipts, to the Omidyar Network, the philanthropic arm of eBay founder Pierre Omidyar.

Other companies, including a giant telecommunications firm and two broadcast networks, have similar arrangements with foreign investors. But only Rappler's registration has been revoked — tellingly, six months after Duterte accused the news site of being U.S.-owned.

During the Marcos era, Filipino journalists and citizens used innovative ways to skirt censorship. There was a robust underground press and above-ground media used allegory and allusion to evade restrictions.

The new media landscape requires new strategies for ensuring that genuine news evades encirclement by poisoned information. More cautious news outlets have taken the path of self-preservation through self-censorship. Rappler, for one, has said it will not stand down, and it has the support of major journalist groups in the Philippines and overseas. In the past, journalists, with the support of outraged citizens, have successfully resisted gagging.

But the Philippine press has never been weaker. Media influence and market power soared after Marcos fell in a 1986 popular uprising. There was a hunger for news and uncensored information and crusading journalists and newspapers were feted for their role in the democracy movement. Before long, powerful families bought newspapers and broadcast networks, using their media clout to advance their interests. Sensationalism ruled in a crowded and competitive media market.

Like elsewhere, technology has disrupted the media business in the Philippines: Revenues have fallen, and audiences have moved online, gravitating toward Facebook, which has become the de facto news source for most Filipinos.

Duterte became president as the media were losing prestige and market power. He attacked the press where it was most vulnerable: His tirades against sensationalist journalists and elitist media owners resonated among many Filipinos.

This is a fraught time for the Philippine press. In the past, journalists and citizens have stood together to defend the right to know. They may do so again, but they need a clear vision, an ark that will see them through the Duterte era's deluge of disinformation.