Accessibility links
This Man Has Freed Hundreds Of Yazidis Captured By ISIS. Thousands Remain Missing : Parallels His phone rarely stops ringing. Most calls and messages are from other Yazidis in Iraq's Kurdistan region, asking for help to find their relatives. Others are from people threatening to kill him. 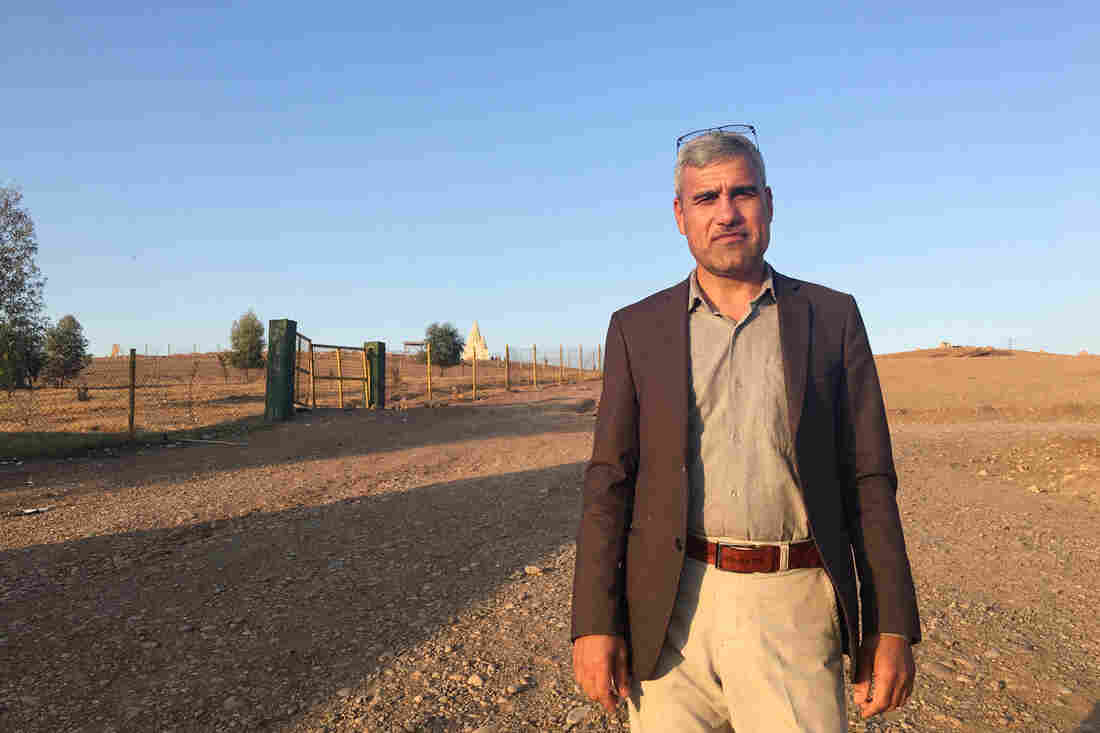 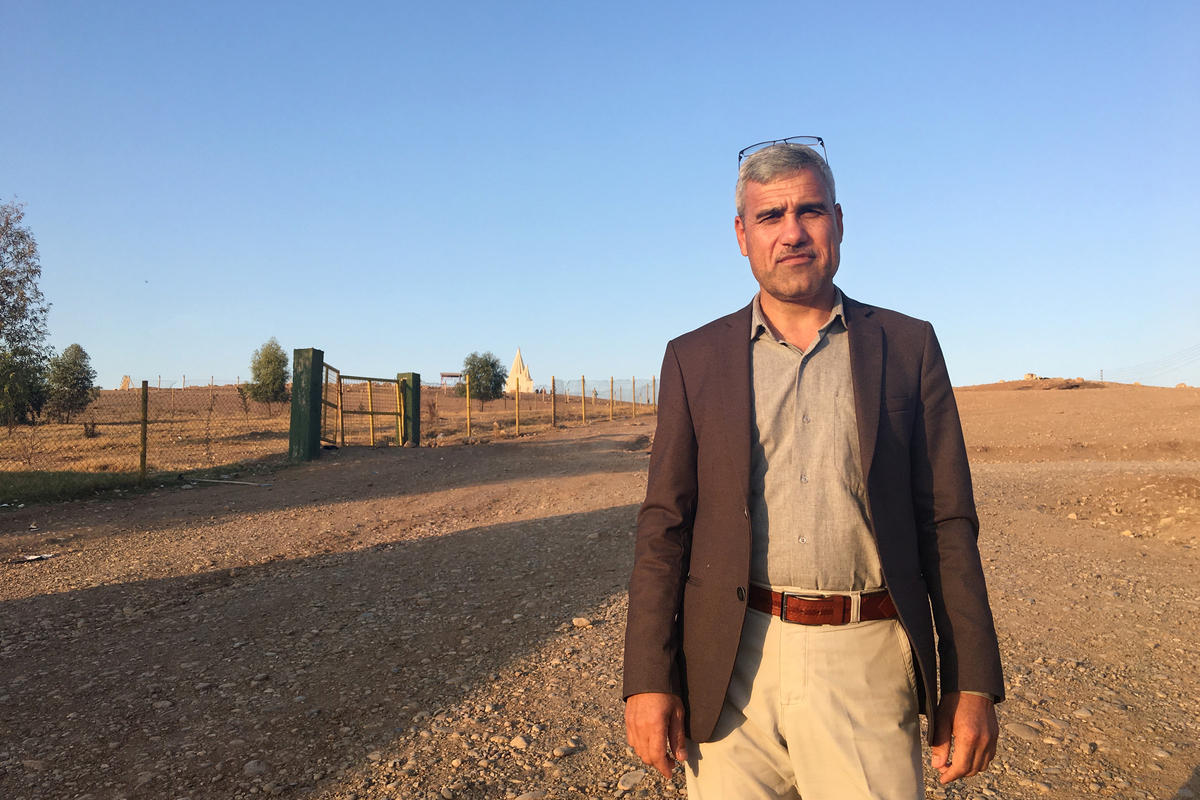 Abdullah Shrim, a former beekeeper, is credited with rescuing more than 300 Yazidi women and children held captive by ISIS.

Abdullah Shrim's phone almost never stops ringing. Most of the calls and messages are from other Yazidis asking for help to find their relatives. Others are from people threatening to kill him.

Shrim, a gregarious man with a ready smile, so far has rescued 338 members of the Yazidi religious group held captive by ISIS — almost all of them from Syria. It's a long way from his background as a beekeeper and businessman.

ISIS May Be Gone, But Yazidis Fearful Of Returning To Their Iraqi Town

"I didn't think for a moment that I could be involved in the rescue field, to save someone," says Shrim, 43, at his home in a village near the city of Dohuk in the Kurdistan region of Iraq.

ISIS roared into Yazidi towns near Mount Sinjar, in northern Iraq, in June 2014, on a mission to exterminate people whom the militants considered unbelievers.

An Iraqi Town Is Retaken From ISIS, And Looting And Retribution Begin

The Yazidis, an ancient religious minority, were left to defend themselves as Kurdish forces retreated. Hundreds of men were killed and estimates of more than 6,000 Yazidis — mostly women, taken as sex slaves, and children — kidnapped.

Months after ISIS was driven out of most of Iraq and Syria, half of the Yazidi captives are still missing. Some have been killed while others are believed to have been taken to Turkey by ISIS or sold to human trafficking rings. Shrim and others, though, believe that hundreds of the captives are still alive and in Syria.

A call from a niece begging for help

In A Somber Homecoming, Yazidis Grieve And Watch Over Their Dead

Shrim himself had 56 relatives taken prisoner. A few months after they were kidnapped, one of his nieces managed to call him from Raqqa, a former ISIS stronghold in Syria, begging for help. Shrim had lived and worked in the Syrian city of Aleppo and he turned to his contacts there.

"I called my friends there and asked what can I do to save them?" he says. "They advised me to cooperate with cigarette smugglers. ISIS considers cigarettes haram [forbidden under Islam] ... so people who smuggle cigarettes are used to a lot of danger."

Shrim and other Yazidis and Kurds set up a network. At first he went into Syria himself in areas controlled by sympathetic Syrian Kurds. But after disputes between Iraqi and Syrian Kurdish parties, that became impossible. Then ISIS expelled Kurds living in Raqqa. After that, Shrim says they had to rely on Arab Syrians to help them — and the rescues became more difficult.

A Story Of Crisis And Resilience, Told Through Music

The price of getting each woman and girl back went from under $3,000 to about $15,000. U.S. and Iraqi forces refused to get involved in rescuing the captured civilians. Money for the rescue operations has come mostly from private donations from Kurdistan, Europe and the United States.

"Maybe 2 percent of the money goes to ISIS," Shrim says. "The money goes to rent houses, we buy bakeries and shops. Those who are helping us might ask for money. If someone is killed working for us we give money to their family. If another wants to get married, we help him get married. ... No one gives you information without asking for something."

He says now that ISIS is almost gone he can talk about the rescue methods. They included a bakery with informants delivering bread to determine whether there were Yazidi women and children inside the customers' homes. Women were sent door-to-door, selling chocolate or clothing to gain entry to houses where they could see women with their faces uncovered. When they found the women they were looking for, they would agree on a plan to help them escape.

It was so dangerous, he says five men and a young woman working with the network in Syria were executed by ISIS after being caught.

"I felt the saddest about the woman," Shrim says. "She was fearless, the toughest fighter I had. She was killed after we sent her to rescue a girl we were talking to on the phone, but the girl was being watched by ISIS."

Shrim notes that boys in the region are valued much more than girls. He says he's learned differently.

"Our Eastern society thinks that women can't do anything ... but when I started breeding bees I saw that the whole bee kingdom was ruled by female bees," he says. "I wish one day, the world would be ruled by women and not men."

He says ISIS sends him regular death threats — attaching photos of him next to his car in Dohuk to let him know they know where to find him.

"But I think my life is worth nothing compared to a tear from the eye of a 12-year-old girl who has been raped," he says. 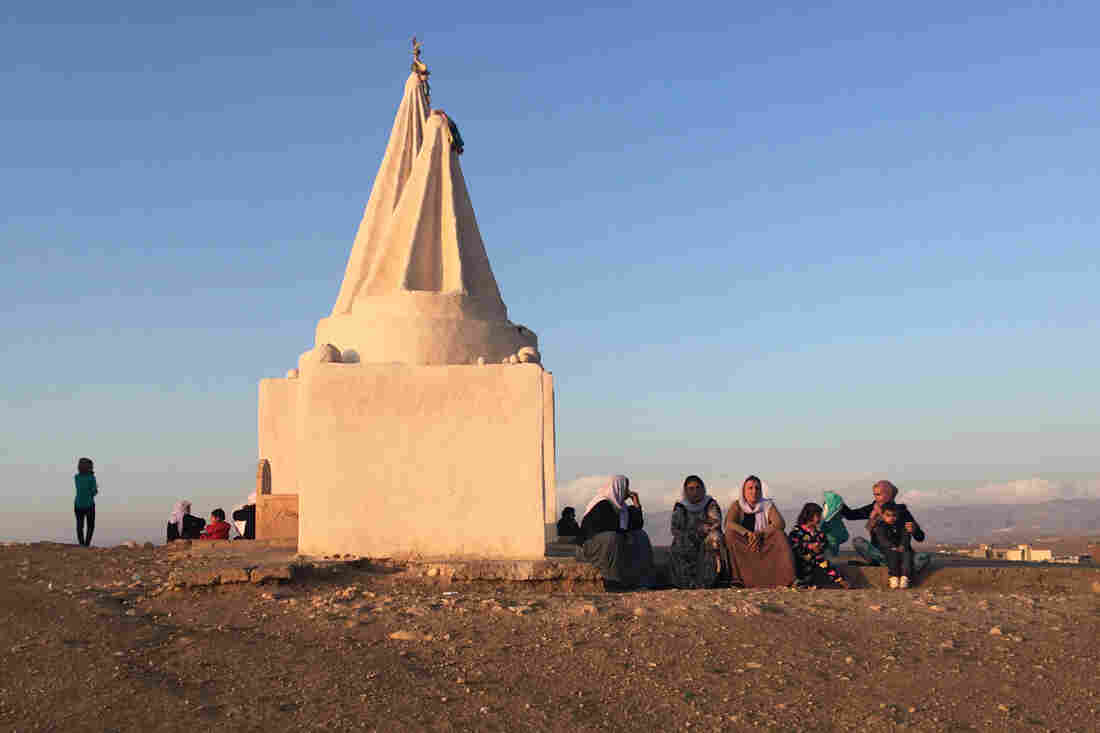 A Yazidi tomb in a village in the Kurdistan region of Iraq. Many families were displaced when ISIS killed hundreds of men and kidnapped thousands of women and children. More than 3,000 Yazidis are still missing. Jane Arraf/NPR hide caption 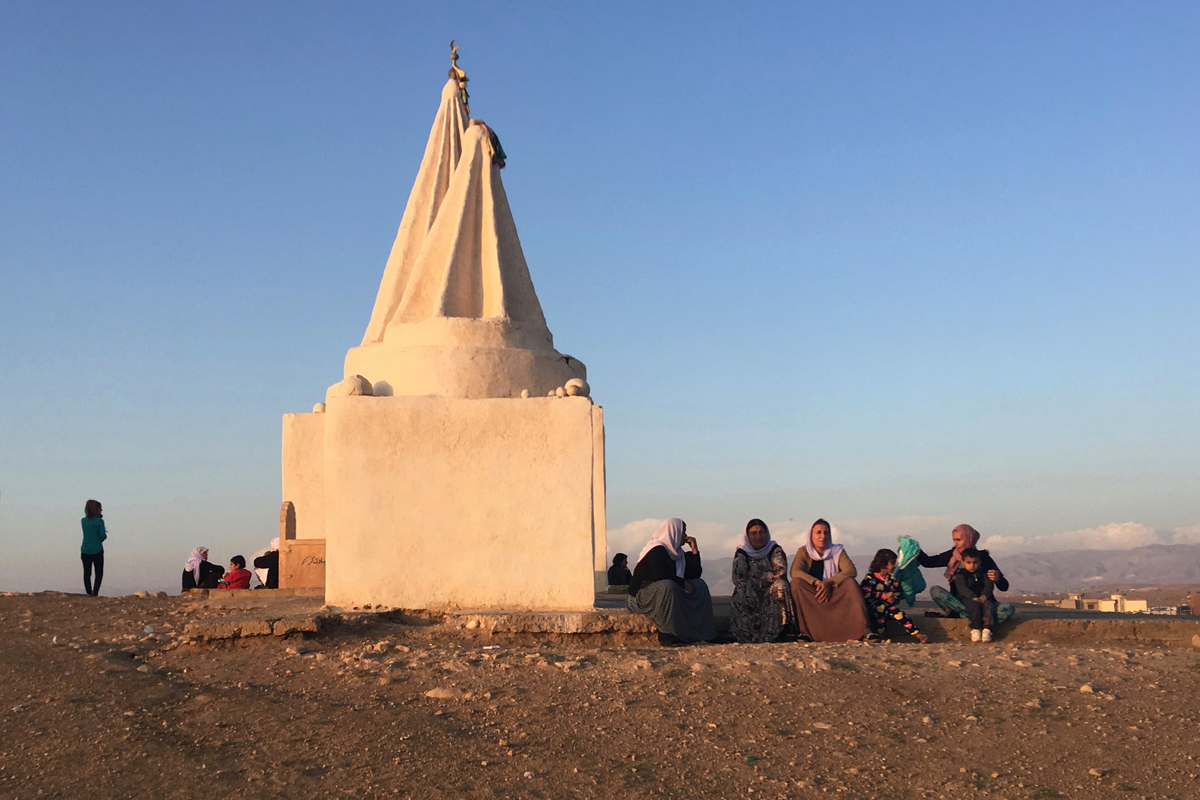 A Yazidi tomb in a village in the Kurdistan region of Iraq. Many families were displaced when ISIS killed hundreds of men and kidnapped thousands of women and children. More than 3,000 Yazidis are still missing.

As he's talking, Shrim breaks away to take calls about a woman and children believed held in the Syrian city of Deir ez-Zor. ISIS has lost most of its territory, but there are still pockets where it operates, and almost every Yazidi family still has relatives missing.

A few minutes later, a group of Yazidi men come into Shrim's home to meet with him. One of them, Aydan Saleh, has four daughters missing. They were ages 11 to 17 when they were captured. Shrim managed to rescue his friend's wife and two young sons from Raqqa, but the trail of his daughters has gone cold.

"We haven't heard anything about them for more than a year," Saleh says. "The last time I got a phone call from them they were in [the Iraqi city] Mosul and then I had information that one was in al-Qaim [near Iraq's border with Syria], one was in Syria and two disappeared."

Leads are harder to come by

The authorities in the semi-autonomous Kurdish region of northern Iraq have counted 6,417 Yazidis kidnapped by ISIS since August 2014. As of December 2017, less than half had been freed or escaped, and 3,210 were still captive or missing, a Kurdish official told Agence France-Presse.

Shrim acknowledges that some of the Yazidis still missing are almost certainly dead — many of them likely killed when ISIS homes and bases were bombed. Although he doesn't say it to the families, he thinks there are perhaps only 1,000 left alive. He won't promise to search for people's families unless there are solid leads and he says those are harder and harder to come by.

Shrim and a former intelligence officer who helps coordinate the rescues believe that several hundred of the women and children might have been taken to neighboring Turkey, where many of the ISIS fighters were from. There are a few women who refuse to come back — Shrim says they've been brainwashed and isolated from their families.

Hiwa Aziz, the former intelligence officer from Kurdistan, flips through photos on his phone of women and children they are still looking for. They include Yazidis, Christians and Shiite Turkmen women kidnapped by ISIS.

He says after three years of being held captive, raped and beaten, the horror for these women and children hasn't ended.

"We have information that some of the women have been sold for human trafficking and some of the children have been sold for organ trafficking," Aziz says in an interview in the Kurdish capital Erbil. He says part of the rescue network is working with international law enforcement agencies to try to crack an organ-smuggling ring they believe is centered in Turkey and catering to wealthy patients in the Arab Gulf states.

Aziz says some of the women have ended up sold to prostitution rings in Europe.

"A year ago, it was easy to find these women and children, but now ISIS is in only a very small area and we don't get much information anymore — it's very hard," he says.

On the outskirts of Shrim's village, a group of Yazidi women sit near a conical tomb on a hilltop as the sun sets. It's the only place they can gather to socialize. The older ones wear white scarves; the younger ones have their hair uncovered.

Almost all of the women have relatives still missing. They cling to messages smuggled out or personal effects as proof their loved ones haven't died. But as time goes on, it is harder to continue to keep that hope.

Juni Naif says her niece, Salwa, is still missing. Last year, one of her brothers managed to escape from ISIS and brought back Salwa's watch as proof she was alive. Since then they've heard nothing.

"People say we can get them back," Naif says, "but it's so hard to find them now."