Accessibility links
In South Korea, A Backlash Against Olympics Cooperation With The North : Parallels "We oppose, we oppose, we oppose," shouted protesters as North Korea's advance team arrived. Thousands signed petitions against a joint women's hockey team. The president's approval rating has fallen. 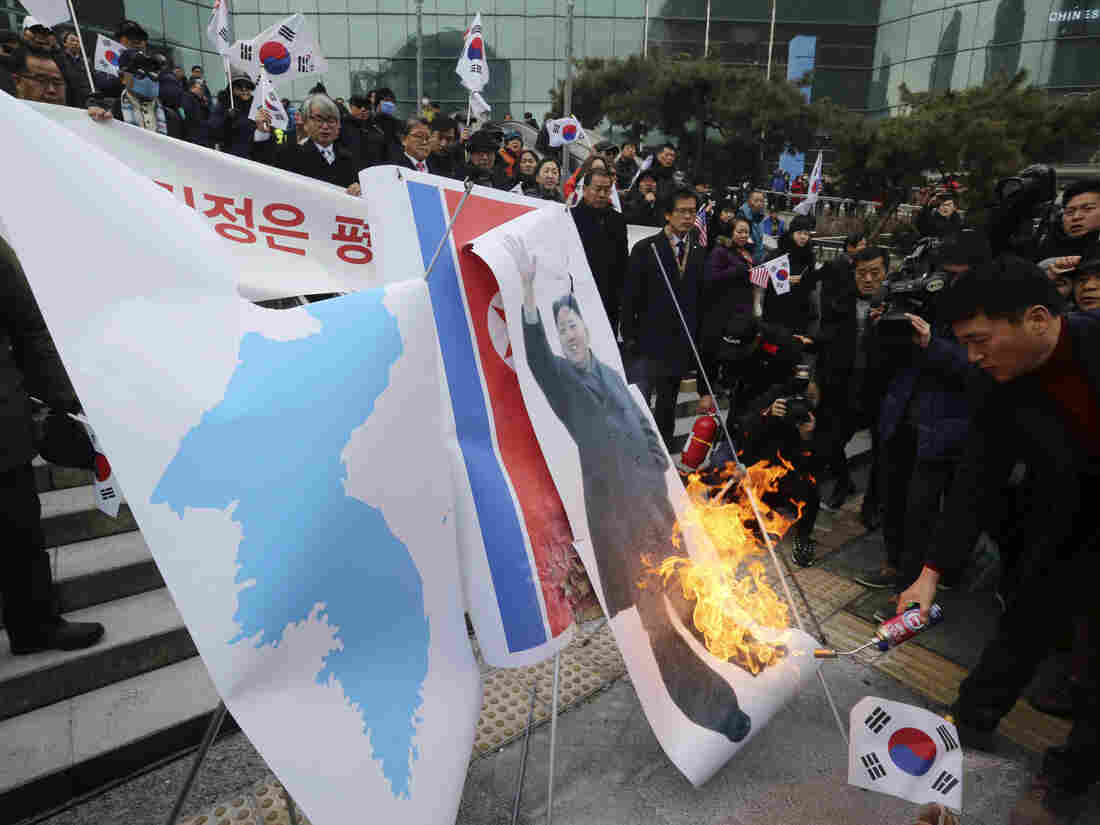 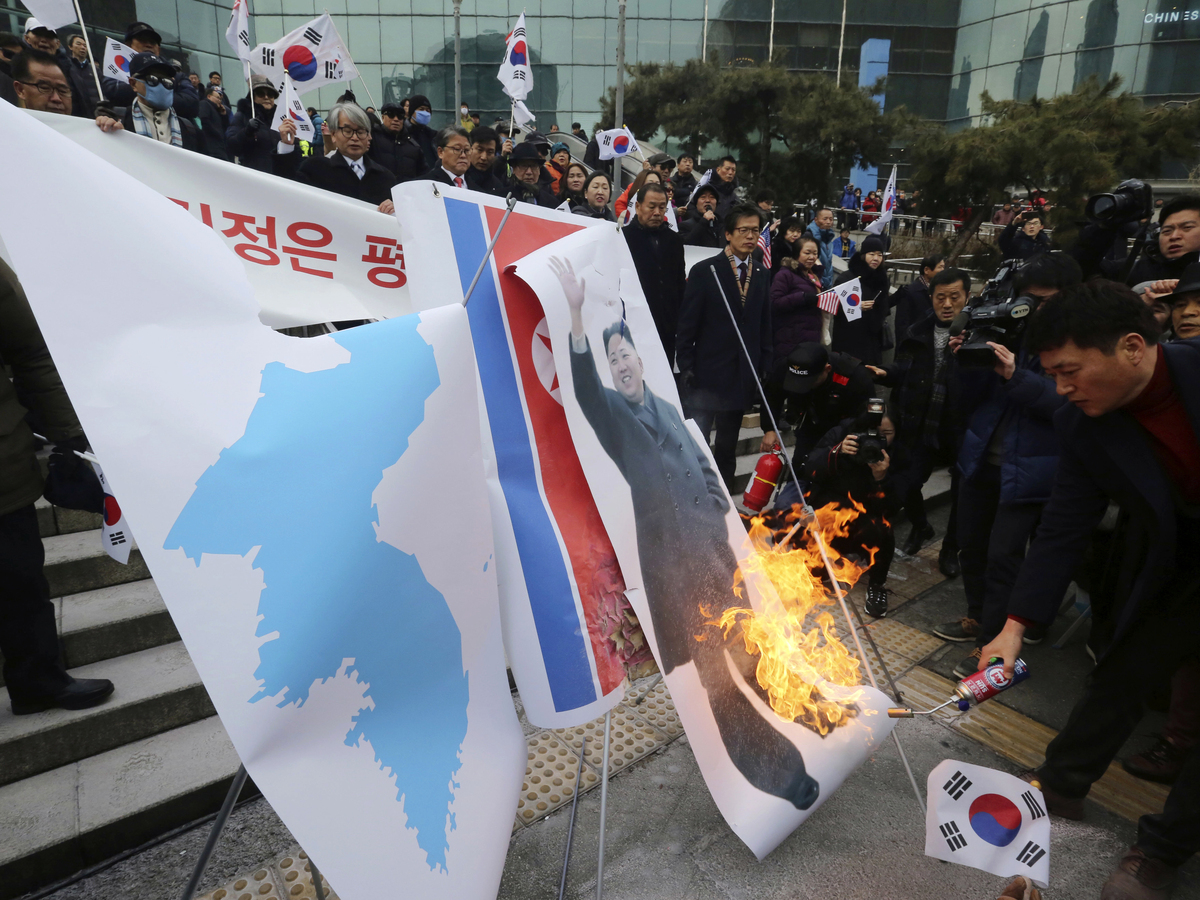 Efforts to make a show of North Korean and South Korean unity at the next Olympics are drawing a backlash in South Korea. In Seoul, protesters Monday set fire to the North Korean flag and a photo of Kim Jong Un. The South Korean president's approval rating has dropped in recent days as well.

"We oppose, we oppose, we oppose," shouted demonstrators at Seoul Station, the rail and subway station in the center of the capital. They showed up to confront a North Korean advance team that had arrived to scout out Olympic venues.

The Olympics cooperation between the North and South came about just this month. Athletes from the two Koreas will march under one unified flag and will form a joint North-South women's hockey team.

North Korea's Olympic Hopefuls Include A Pair Of Figure Skaters

Last week, South Korean president Moon Jae-in called the moves important steps toward peace in North-South relations — part of "a historic moment to be remembered for a long time," he said during a visit to South Korean athletes at their Olympic training center. "Not only will Koreans be moved, but people around the world will be deeply moved."

But many South Koreans aren't impressed. 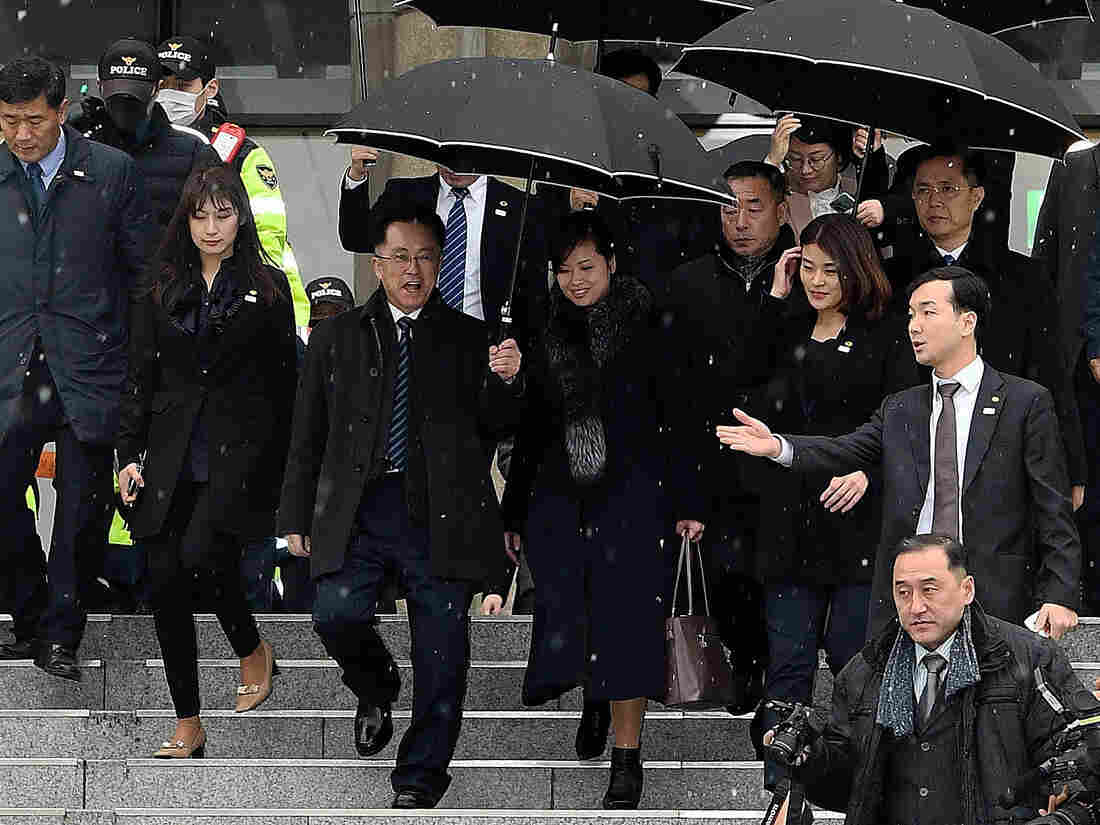 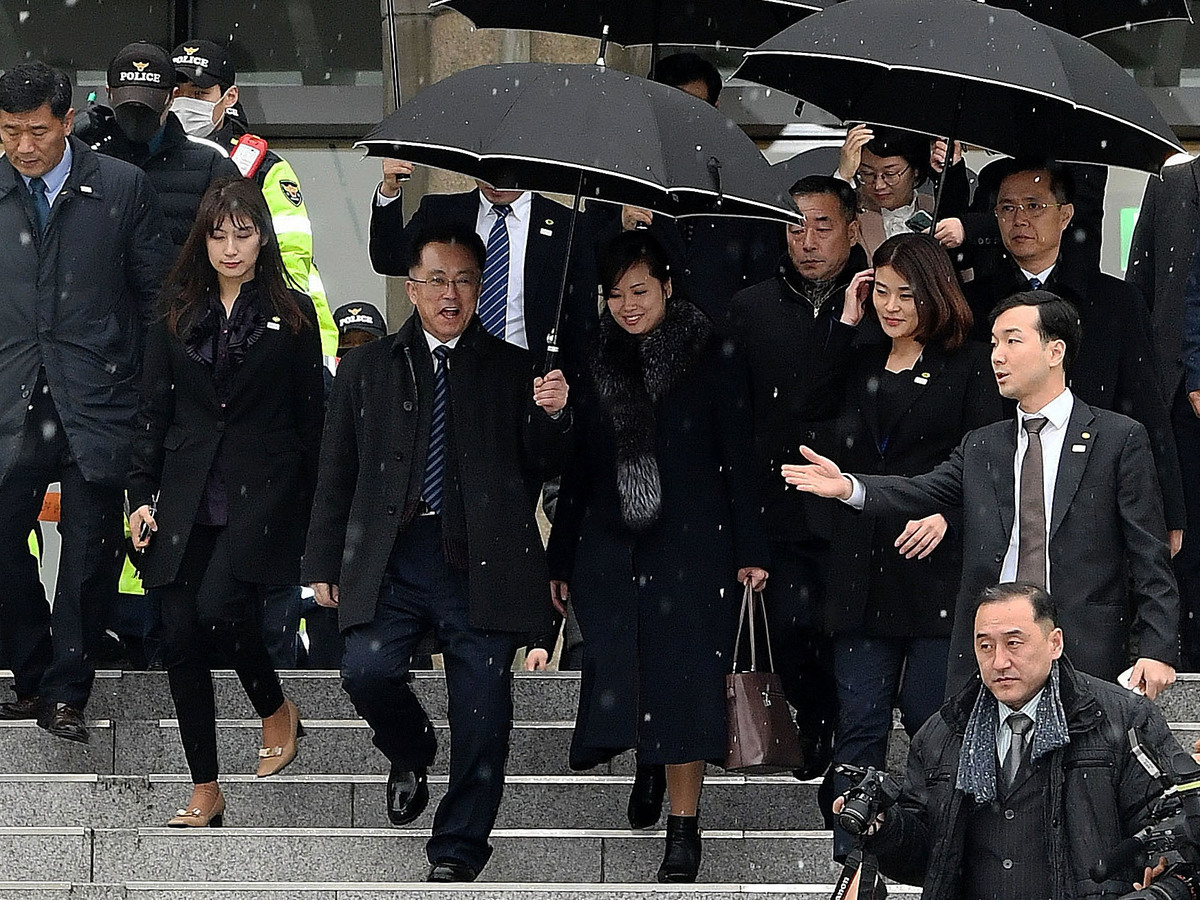 "It's not a smart move," says Seoul resident Shin Jae-mun, "because the South Korean ice hockey team already practiced a lot by playing by their own team." He believes South Korean Olympians are being used as political pawns.

Amid public anger over the combined women's hockey team, Moon's approval rating fell to the second lowest of his presidency. In a recent poll, 73 percent of South Koreans said they saw no need for a combined team. Petitions against the move have flooded the president's office, some having tens of thousands of signatures.

As time wears on under two separate Koreas, younger generations don't feel the same connection to North Koreans as their grandparents, who remember a time where they all were part of the same country. As North Korea has built up its nuclear and missile capabilities, trust has worn down.

"Unification has to be something that both Koreas substantively work on," says Moon. "It can't be something you talk about rhetorically, you can't just wish it. You can't just put on orchestral and cheering squad shows in order to say you have unification. And I think South Koreans are demanding some substance."

Shin, the Seoul resident, is skeptical about a long-term improvement in relations.

"North Korean government is not [a] reasonable government. They are unpredictable," he says. "This Olympic thing will not last long enough."

At the demonstration against North Korea Monday, protesters complained the Pyeongchang Olympics were turning into the "Pyongyang Olympics." They used a blowtorch to set fire to a photo of Kim Jong Un.

"We may not be able to create such an opportunity for dialogue again," Moon warned.

South Korean student Byun Joo-kyung says she understands the need for dialogue. "We have a lot of tension, so maybe we have to lower it," she says.

But she doubts this will change North Korea's nuclear posture. That uncertainty about harmony with the North is driving the political divide in the South.