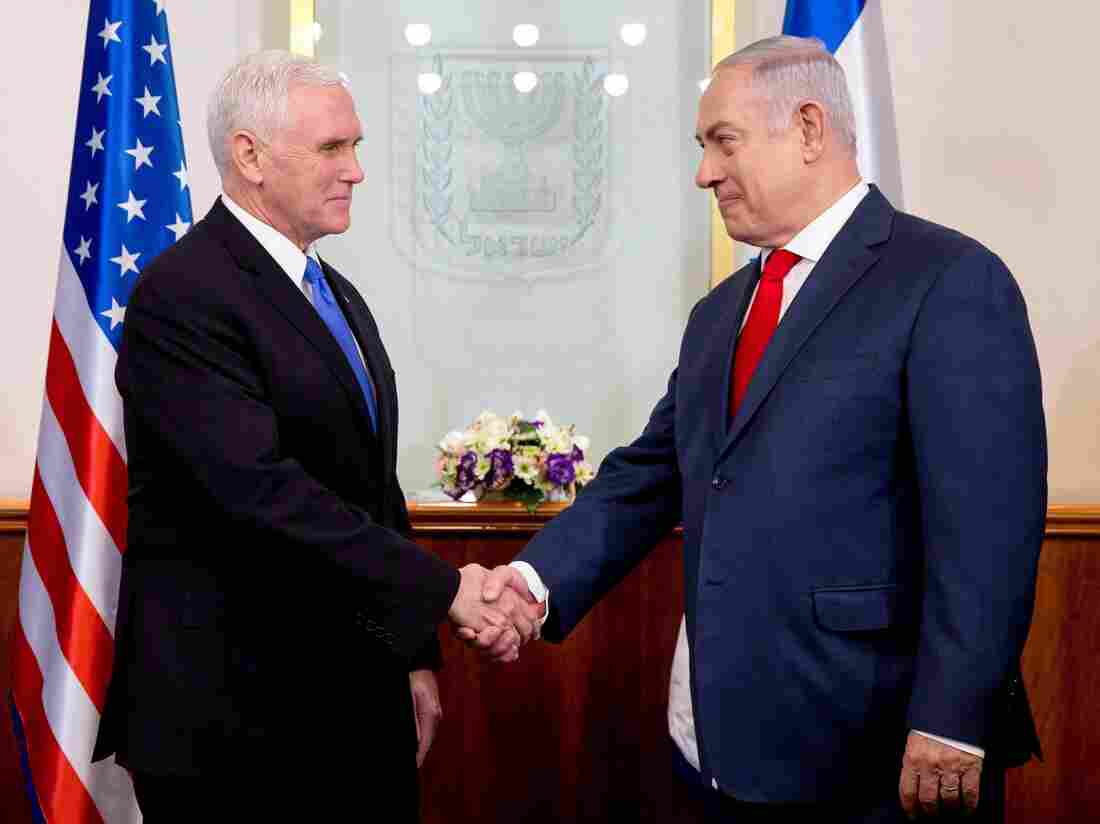 Vice President Pence (left) shakes hands with Israeli Prime Minister Benjamin Netanyahu during their meeting at the prime minister's office in Jerusalem on Monday. The visit, initially scheduled for December before being postponed, is the final leg of a trip that has included talks in Egypt and Jordan as well as a stop at a U.S. military facility near the Syrian border. Ariel Schalit/AFP/Getty Images hide caption 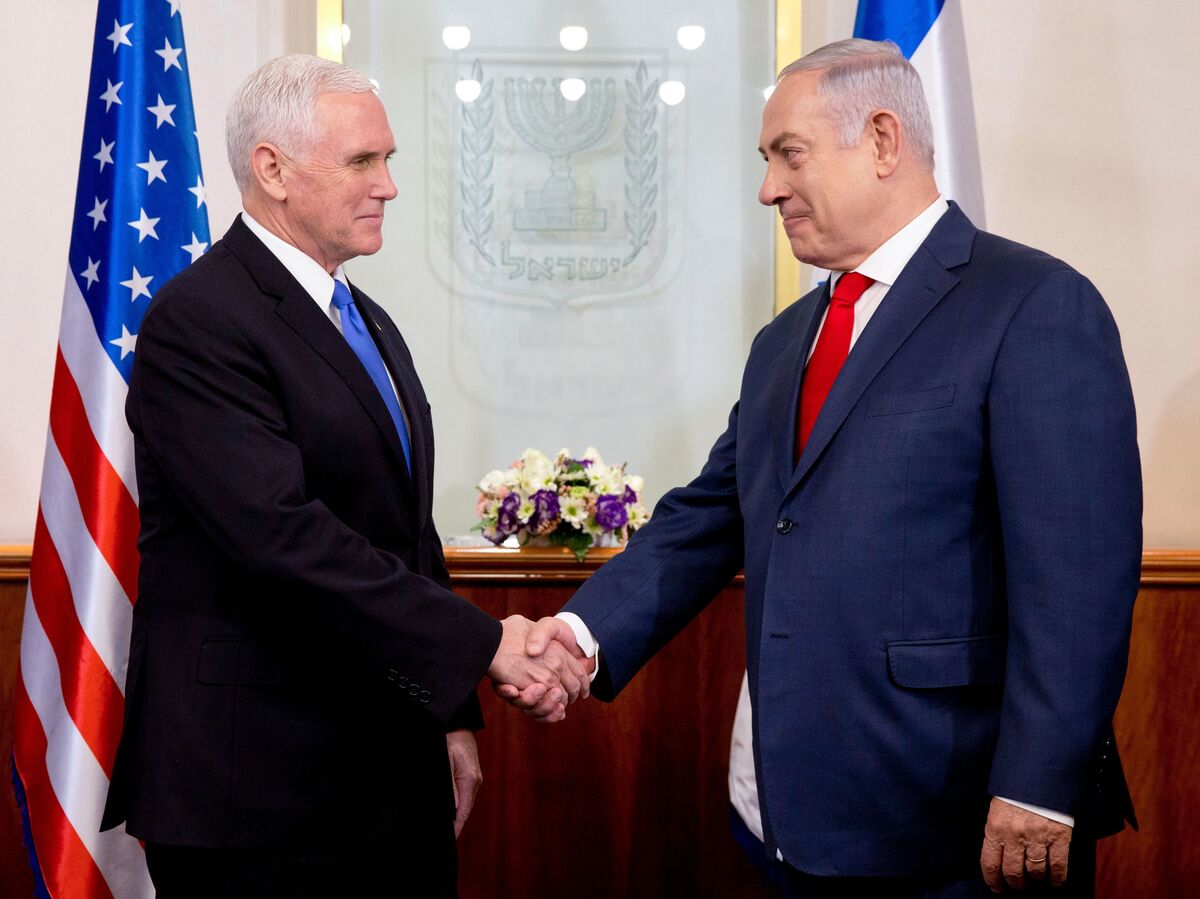 Vice President Pence (left) shakes hands with Israeli Prime Minister Benjamin Netanyahu during their meeting at the prime minister's office in Jerusalem on Monday. The visit, initially scheduled for December before being postponed, is the final leg of a trip that has included talks in Egypt and Jordan as well as a stop at a U.S. military facility near the Syrian border.

Vice President Pence says the United States will open an embassy in Jerusalem by the end of 2019 — much more quickly than initially promised.

Pence announced the new timetable in a speech before the Knesset, Israel's parliament, drawing a standing ovation from Israeli lawmakers and accelerating one of the Trump administration's most contentious foreign policy decisions to date.

Israeli Prime Minister Benjamin Netanyahu shot up from his seat, smiling and clapping. He appeared overjoyed, even surprised.

In December, Secretary of State Rex Tillerson said it will take at least three years to build an embassy in Jerusalem. Senior White House officials have previously said the embassy could not be moved to an existing building in Jerusalem.

When President Trump last month appeared before cameras and announced the U.S. was recognizing Jerusalem as Israel's capital and beginning to prepare for a new embassy in the city, Pence stood behind Trump — in more ways than one.

As a devout Christian and an ardent supporter of Israel, Pence was one of the biggest advocates for the move as the Trump administration debated the decision.

"You are a true friend of Zion!" read large posters hung in Jerusalem for Pence's visit by the Friends of Zion, a U.S. evangelical Christian organization in the city. The group said it had plastered more than 100 such posters throughout the city and on buses.

In Pence's speech Monday, he said the first settlers in America were inspired by the Hebrew Bible.

"My country's very first settlers also saw themselves as pilgrims, sent by Providence, to build a new Promised Land. The songs and stories of the people of Israel were their anthems, and they faithfully taught them to their children, and do to this day," Pence said.

"The messianic discourse of Pence is a gift to extremists and has proven that the U.S. administration is part of the problem rather than the solution," he said. 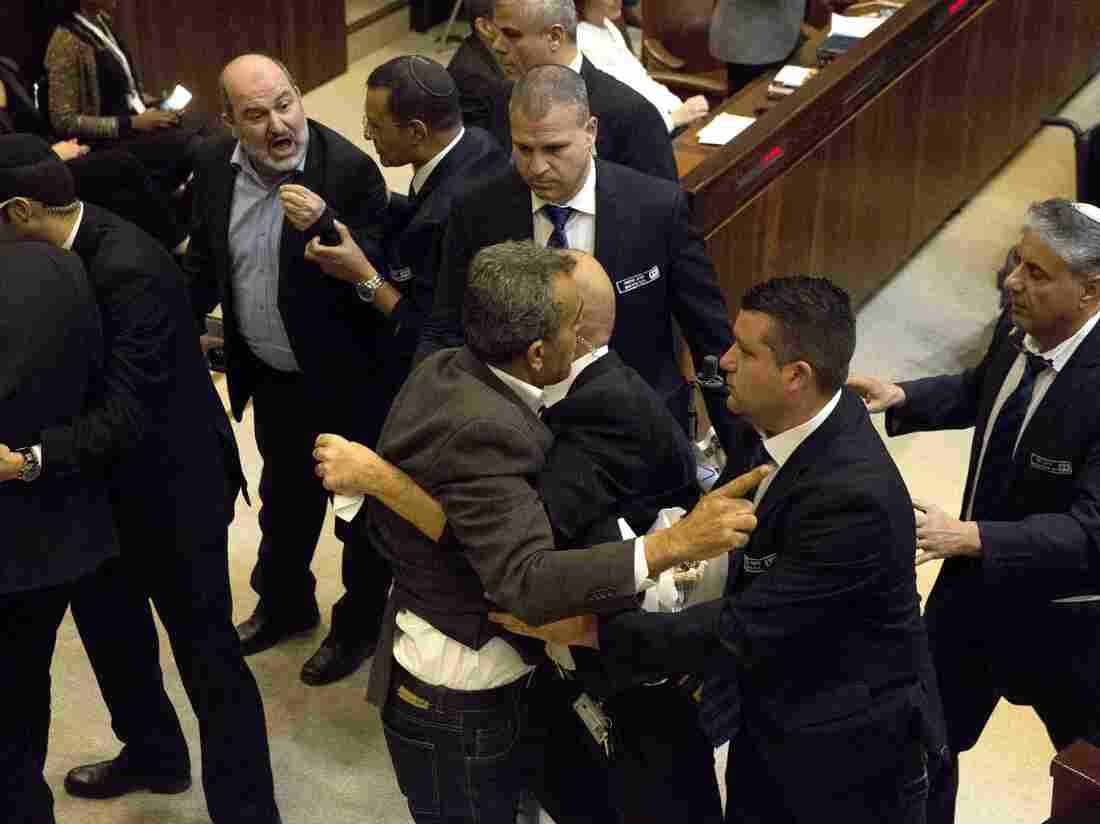 Israeli Arab parliamentarians and other members of the Knesset scuffle with security after they held protest signs during Monday's speech by Vice President Pence. Ariel Schalit/AFP/Getty Images hide caption 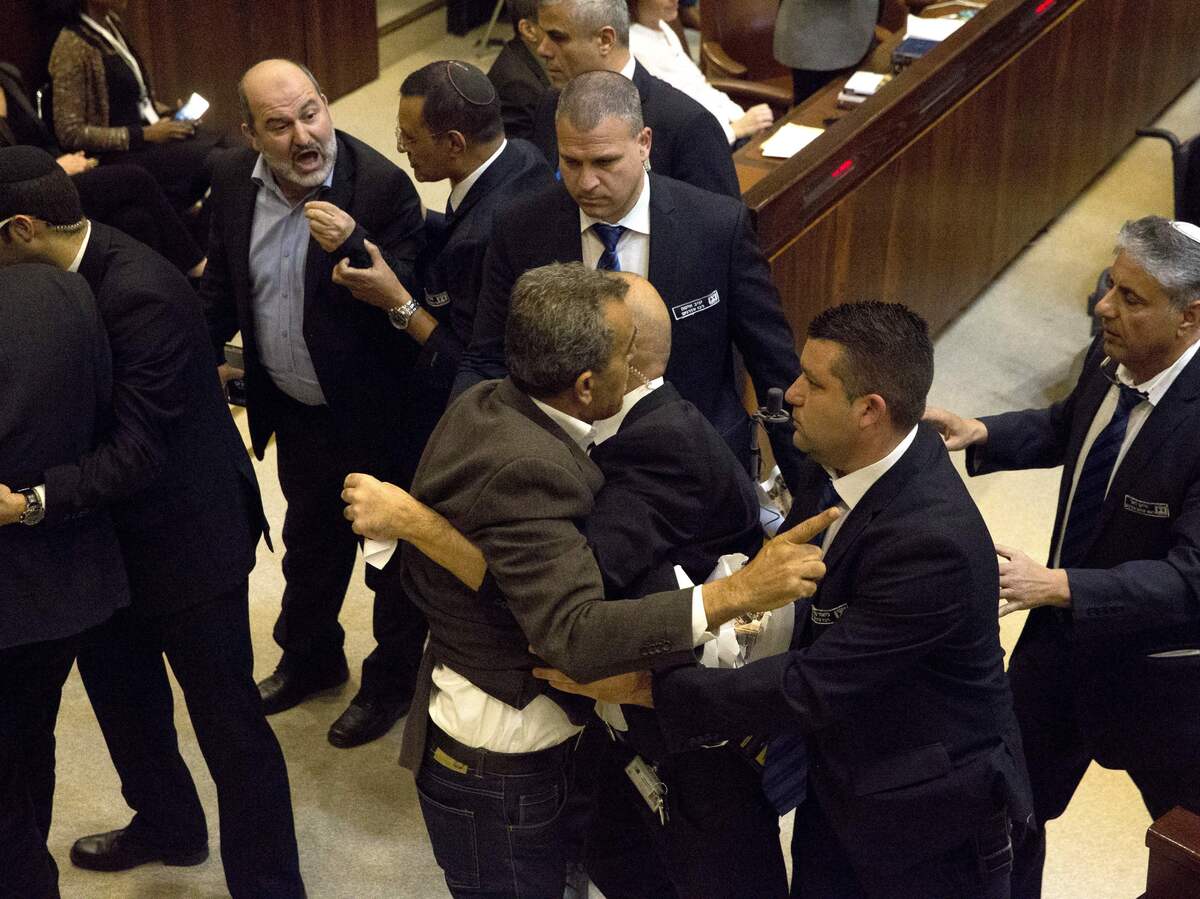 Israeli Arab parliamentarians and other members of the Knesset scuffle with security after they held protest signs during Monday's speech by Vice President Pence.

Israeli Arab lawmakers protested on the parliament floor as Pence took the stand and were ushered out of the hall.

Jerusalem — home to some of the most sacred shrines in Christianity, Islam and Judaism — is perhaps the most emotionally charged aspect of the long-running Israeli-Palestinian conflict.

Members of the Knesset who stood and held signs in protest at the start of VP Pence’s speech are ushered out. pic.twitter.com/cXmzVIn5jP

Israel claims the whole city as its capital, while Palestinian leaders want to establish a capital in the city's east, where Palestinians live. No country has its embassy in Jerusalem. The U.S. previously backed the current international consensus not to move embassies there because the city's status should be negotiated by Israelis and Palestinians.

The U.S. decision on Jerusalem sparked ongoing Palestinian protests, some of which turned deadly. An overwhelming majority of countries rejected the decision in the United Nations. During his meeting with Pence in Amman, King Abdullah of Jordan denounced the move and called on the U.S. to restore "trust and confidence" in the possibility of achieving Israeli-Palestinian peace — with a Palestinian state alongside Israel.

During his visit in Jerusalem, Pence offered an explanation for the Jerusalem decision: By recognizing the "obvious" fact that Jerusalem is Israel's capital, he said, it creates an opportunity to "move on" to other issues that must be negotiated in peace talks.

But instead of allowing the parties to move on, it has led to a crisis in U.S.-Palestinian relations — the lowest point in the Trump administration's months of shuttle diplomacy and attempts to restart the peace process.

U.S. Freezes More Than Half Of Aid To U.N. Agency For Palestinian Refugees

Palestinian Authority President Mahmoud Abbas says the U.S. sided with Israel and that he will not participate in peace negotiations led by the United States. Trump tweeted that if the Palestinians were not prepared to negotiate, the U.S. should cut funding for them.

Indeed, the administration subsequently cut $65 million in funds to a U.N. agency for Palestinian refugees but said it was meant to encourage reform in the agency, not as punishment.

In a rambling and fiery speech, Abbas directed a colloquial Arabic phrase at Trump — literally "may your house be destroyed" — that is often used casually but was widely criticized by Israeli leaders and seen as brash rhetoric directed at a foreign leader.

Meeting with European Union foreign envoys in Brussels, Abbas said the Palestinians would participate in peace talks only if they were held with the involvement of other countries, not just the United States. Abbas sees European countries as more favorable than the Trump administration to the Palestinians.

Pence delivered another message in his speech in the Knesset: that the U.S. would support the creation of an independent Palestine next to the state of Israel — if both sides agree to it.

Opposition lawmakers stood and applauded, but not Netanyahu. Many members of his right-wing coalition reject a two-state solution. Since Trump's election, many in the Israeli government have called for annexing parts of the Israeli-occupied West Bank where Israeli settlements are located and where Palestinians want to establish a state.

Israel has refrained from such an annexation since capturing the territory 50 years ago, fearing international and American backlash, but many lawmakers believe the time to do it is now — with a sympathetic President Trump in the White House. The Trump administration has been much more tolerant of Israeli West Bank settlements than have previous U.S. administrations, Republican and Democratic alike.

The speaker of the Knesset, Yuli Edelstein, announced in the parliament — with Pence sitting next to him — that Israel would continue to build homes in Jewish settlements in the West Bank.

After Pence's speech, Edelstein gave the vice president a gift basket of products made in the West Bank settlement of Maale Adumim, including wine from two wineries, a sesame-based fudgelike treat called halvah and the savory condiment tahini. Edelstein's office said it was a taste of products from a settlement industrial zone where "Arabs and Jews work together in harmony and cooperation."

The FPA said the journalist was asked to remove her bra during a search and, when she refused, was denied entry.

"The repugnant practice of strip-searching journalists puts Israel in a category all of its own and is a mark of shame for a country that boasts of its democratic credentials," the FPA said in a statement.