Accessibility links
Israel Speeds Up Underground Border Wall To Block Gaza Tunnels : Parallels The Israeli military says the 40-mile barrier will run along the country's border with the Gaza Strip in an effort to thwart attacks by Palestinian militants. 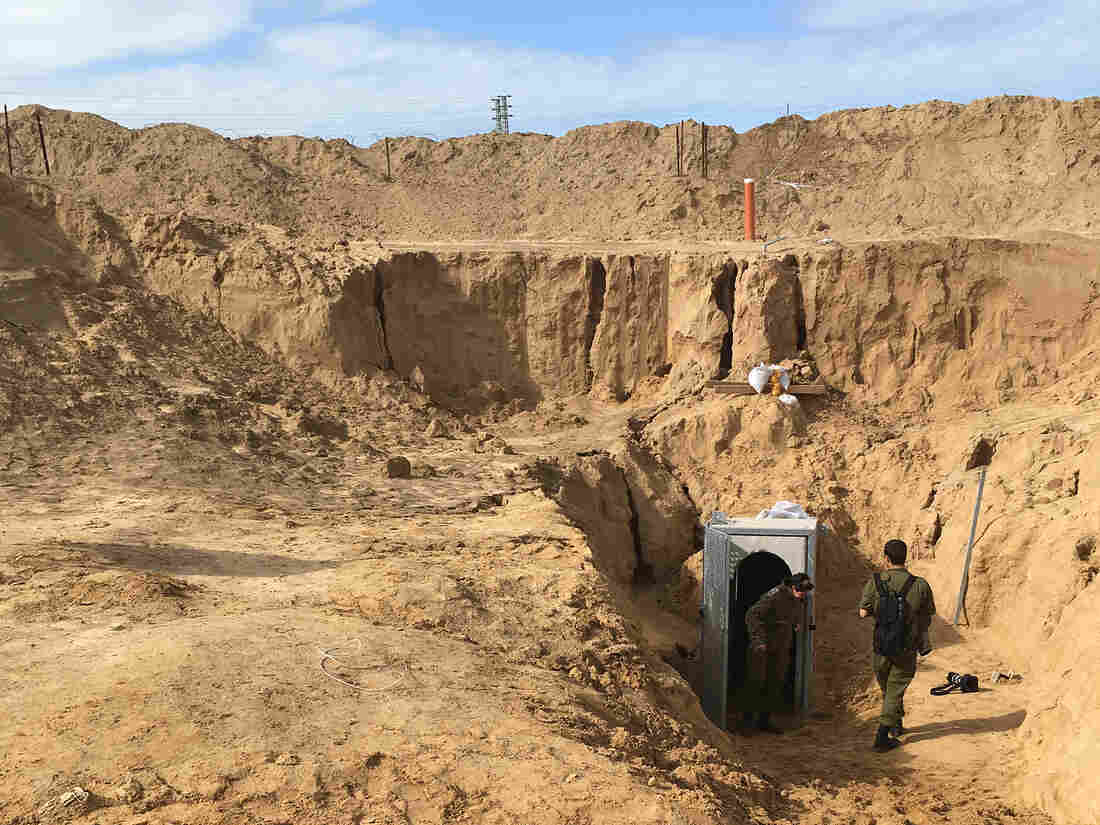 The Israeli military is working on a 40-mile wall that will run the length of the nation's border with the Gaza Strip to counter tunnels dug by Palestinian militants. Daniel Estrin/NPR hide caption 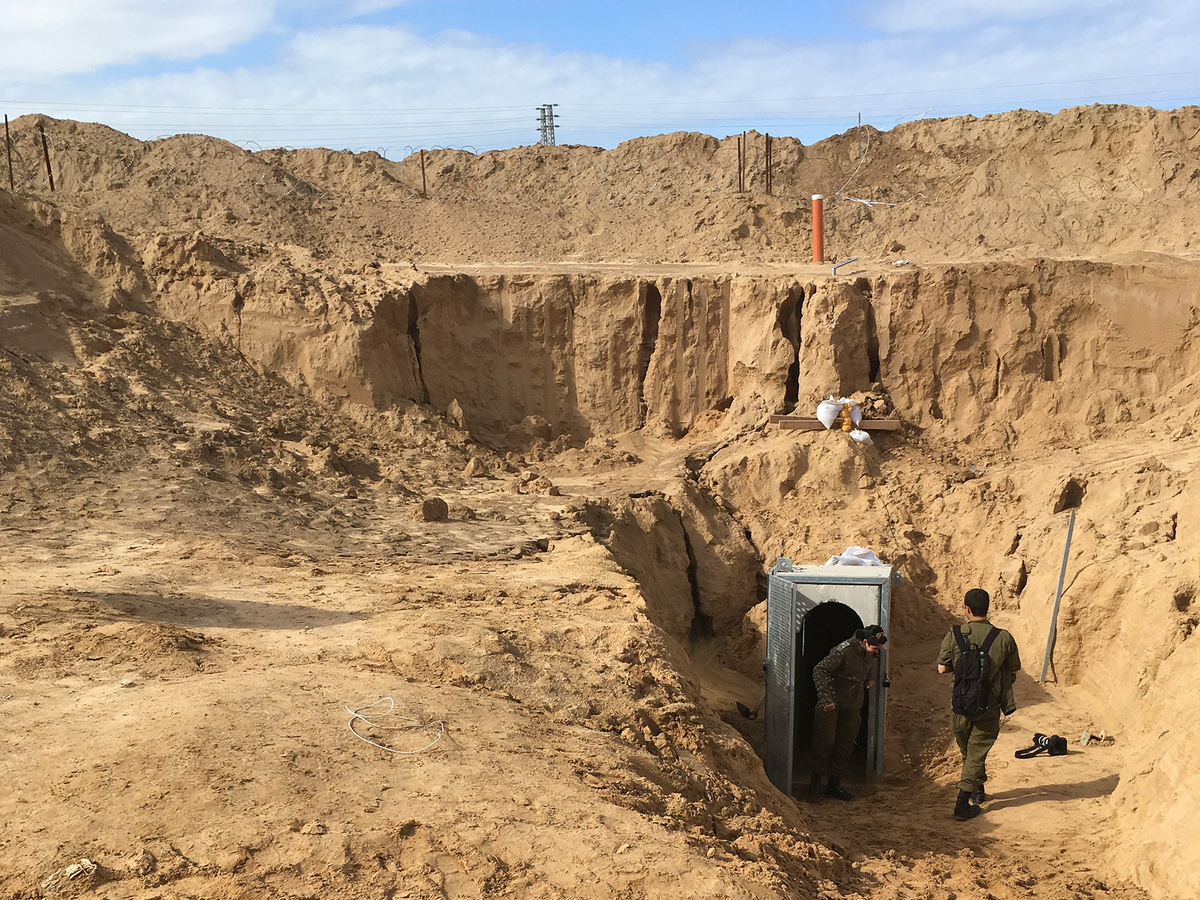 The Israeli military is working on a 40-mile wall that will run the length of the nation's border with the Gaza Strip to counter tunnels dug by Palestinian militants.

The Israeli military is speeding up construction of its first underground border wall.

The 40-mile-long wall will run the length of Israel's border with the Gaza Strip to counter tunnels that Palestinian militants have dug into Israeli territory.

Dozens of tunnels, reportedly running dozens of miles long, have been constructed in attempts to infiltrate Israeli territory and carry out attacks, according to the Israeli military.

Work on the "obstacle," as the military dubs it, began last summer. About 2.5 miles are already complete. Now the military says it is accelerating construction, working 24 hours a day, six days a week — breaking only for the Sabbath — to complete the wall by mid-2019.

How deep underground the wall will go is being kept secret. "It's deep enough," said a senior Israeli military official, who briefed reporters on the condition of anonymity according to army protocol.

On a media tour last week, soldiers drove reporters in armored vehicles along the length of the Israel-Gaza border, which has been transformed into a large construction site. Cranes, concrete production stations, rebar and dirt mounds litter the area.

The construction is being carried out by Israelis and workers from Russia, India, Brazil and elsewhere. Observation posts manned by the Islamist militant group Hamas sit just across the border.

The tunnel barrier is being built the same way one would construct walls for an underground parking lot, the senior military official said. Workers drill long slits into the ground and fill them with fluid bentonite to temporarily block the space. They lower 80-foot-long rebar braces, several of them welded together, into the ground, pump the bentonite out and replace it with concrete. 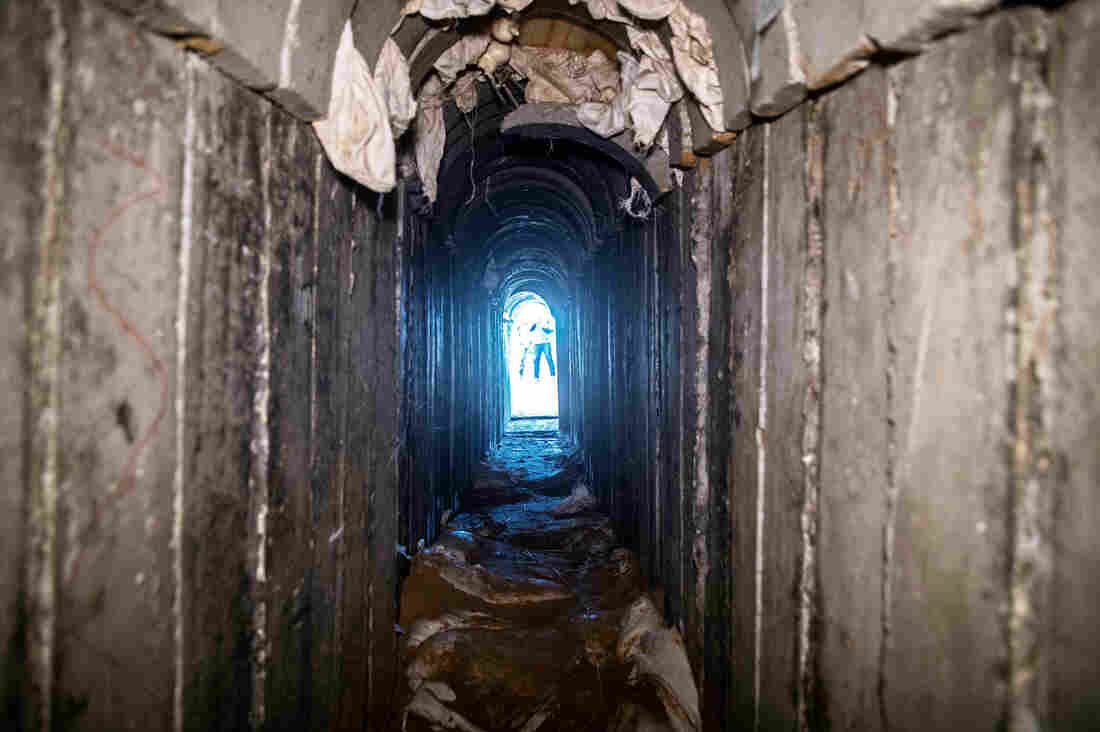 Israel said said it has discovered and destroyed more than 30 tunnels that militants dug from the Gaza Strip. The new underground wall is meant to thwart future tunnels — and existing tunnels Israel has yet to find. Jack Guez/AFP/Getty Images hide caption 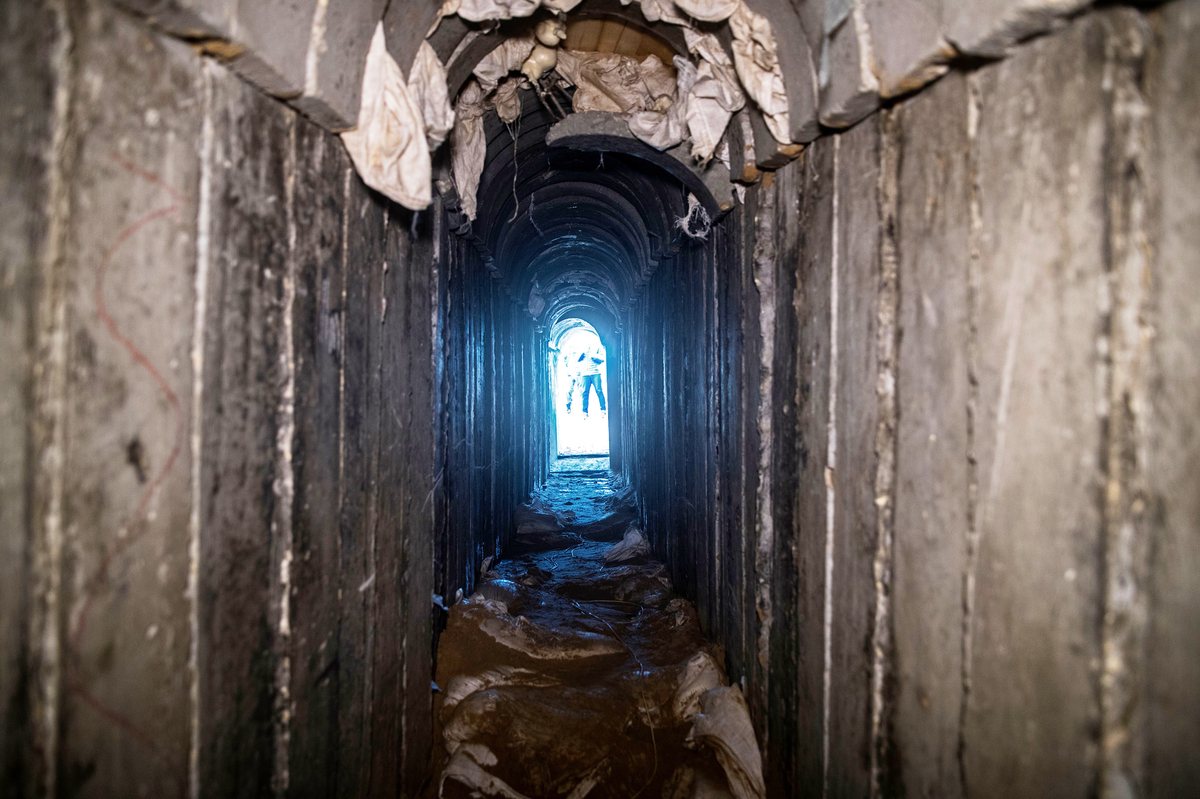 Israel said said it has discovered and destroyed more than 30 tunnels that militants dug from the Gaza Strip. The new underground wall is meant to thwart future tunnels — and existing tunnels Israel has yet to find.

On top of the underground barrier, Israel is also building an aboveground border fence. The government is installing sensor technology to detect when militants are tunneling close to the border, the military says.

The tunnel blockage is Israel's latest effort to thwart attacks from Gaza, a territory controlled by Hamas.

In earlier countermeasures, Israel focused on the skies. In response to rocket fire, Israel developed the Iron Dome missile defense system, which can intercept rockets midair before they hit Israeli territory.

Then, in a 2014 war, Israel encountered a different threat, below the ground. Hamas militants popped out of tunnels stretching from Gaza to Israel and attacked soldiers along the border.

After the war, Israel destroyed 32 tunnels it found along the border. In recent months, Israel said it discovered and destroyed three new tunnels that crossed into Israeli territory. The new underground wall is meant to thwart future tunnels — and existing tunnels Israel has yet to find.

Israel's measures aren't the first attempt to wall off Gaza tunnels. There has been a U.S.-funded effort by Egypt to block tunnels used for smuggling goods, people and weapons on Gaza's border with Egypt. But Palestinian smugglers have continued to breach the barriers.

On the media tour, reporters walked single file into a tunnel detected and destroyed in October, which the army said was built by the Palestinian Islamic Jihad militant group. The dark, narrow shaft has a low, arched concrete roof and is walled with concrete slabs. Several militants inside the tunnel were killed when Israel destroyed it.

"It's like an underground city," the senior military official said.

He showed reporters an aerial map of Gaza with a maze of zigzagging, vein-like lines representing tunnels. He declined to say how many tunnels exist.

Hamas acknowledges it has dug tunnels. Its spokesman, Abed Lateef Kanoo, said the group will not be deterred by Israel's anti-tunnel measures.

"Destroying tunnels will never buy security" for Israel, the spokesman said. "Our resistance is developing all the time."

Indeed, the Israeli military says Hamas is training land and sea forces, arming itself with drones and looking to improve its missiles.

Abu Bakr Bashir contributed to this report from Gaza.