Accessibility links
Will A Scandal Over Expensive Watches Bring Down Thailand's Government? : Parallels The deputy prime minister is believed to own some 25 luxury watches, worth more than $1 million. The fallout has tarnished the government's image, leading some to wonder how much longer it will last. 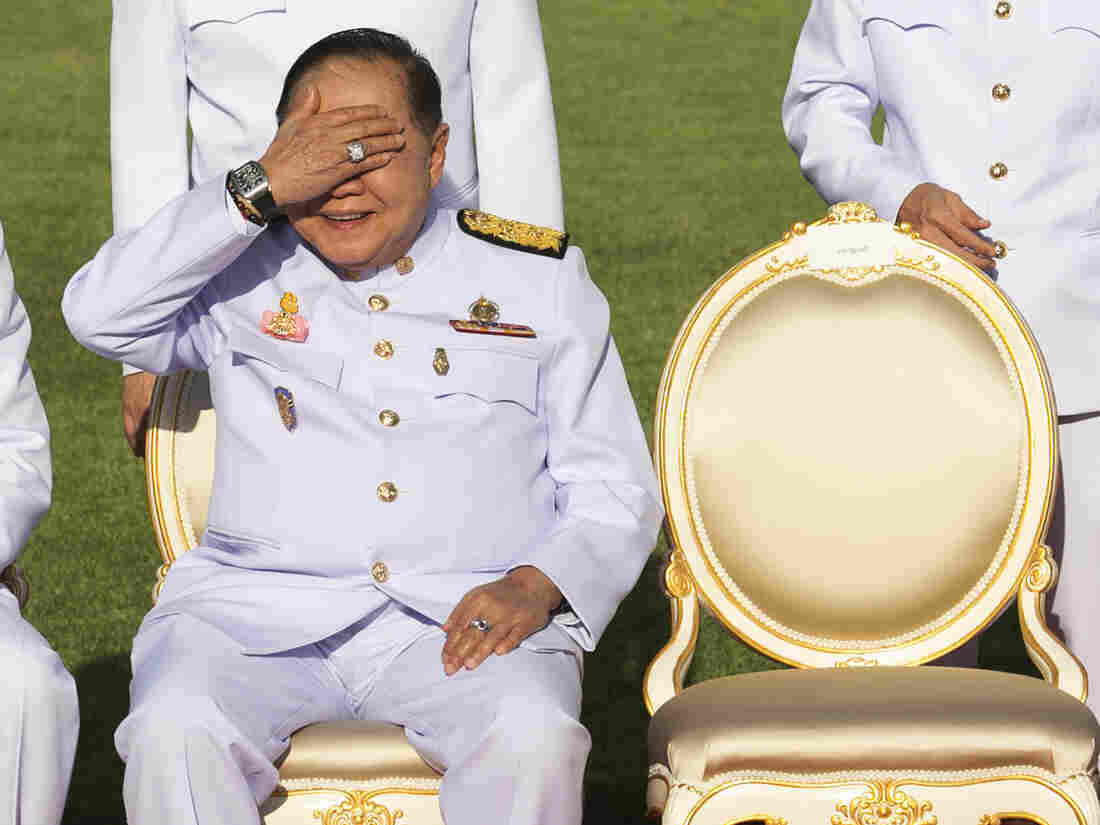 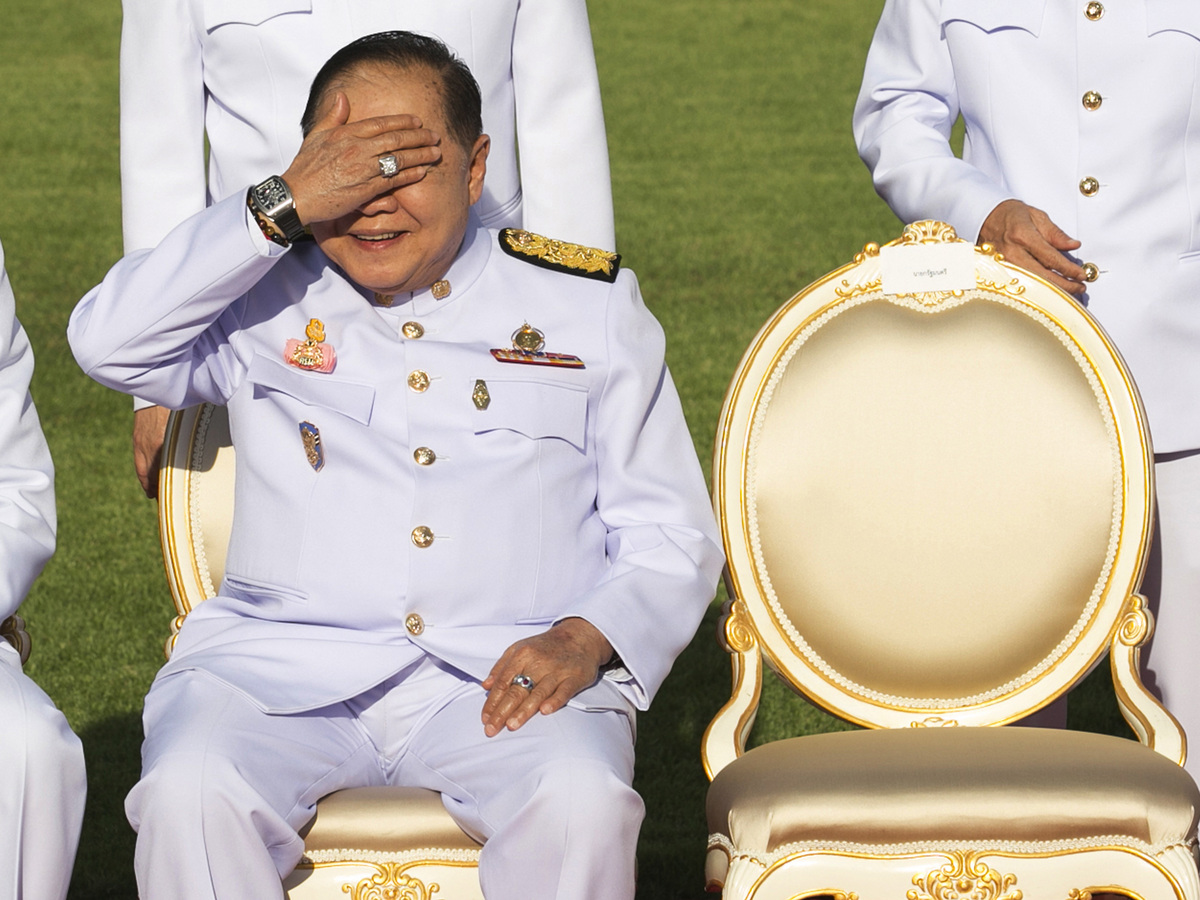 Deputy Prime Minister Prawit Wongsuwan raises his hand to shade the sun, revealing a luxury watch and diamond ring, during a Dec. 4 ceremony at Government House. The expensive jewelry set off an outraged reaction in Thailand.

Last month, at a Cabinet function on the lawn of Bangkok's Government House, deputy prime minister and defense minister Prawit Wongsuwan made a simple gesture: He raised his arm to shield his eyes from the sun.

He might be wishing by now that he hadn't. In doing so, he exposed the bling on his wrist and a diamond ring on his finger. The wristwatch turned out to be a Richard Mille, worth $90,000 by some accounts. Internet sleuths were quick to scour the Web for more treasure, discovering photos of a slew of watches on Prawit's wrist over the past few years, including several Richard Milles, Patek Philippes and Rolexes.

The total, according to the Los Angeles based Thai Facebook page CSI-LA: 25 luxury watches and counting, worth more than $1 million, and all undeclared on his personal assets list.

It all seems a bit much on a civil servant's modest salary. And the fallout has caused enough damage to the military-led government's already-tarnished image that some analysts are wondering how long the government, in power since a 2014 coup, can last.

At first, the pugnacious Prawit was unrepentant, telling reporters he couldn't remember where or when he got his watches — and questioning why it was any of their business anyway. But he said he'd be happy to talk to the National Anti-Corruption Committee — headed until Wednesday by one of his own former aides — and vowed to step down if found guilty.

Prawit later changed his tune about the watches, saying he'd "borrowed" them from friends.

Few believe him. The NACC says it's talking to the "friends," but has yet to open an official probe.

"This is a whitewash and people aren't buying it," says Thitinan Pongsudhirak, who teaches Political Science at Bangkok's Chulalongkorn University.

He says the deputy prime minister is now a dead man walking, politically at least.

"He's on a kind of political death row. He is untenable. It is a matter of when, to me, that he will have to resign because of these watches," Thitinan says.

He doesn't think the damage will stop there.

"The watch saga, I think, will pave the way for the downfall of this government, a change of government one way or the other sooner or later," Thitinan says. "It's a kind of fuse that's lit a powder keg of dissent, frustration. The watch scandal is becoming that catalyst."

That powder keg of dissent has grown since the 2014 coup, and both social media and civil society have latched onto this issue like a dog with a bone. The Prawit watch scandal has struck a nerve with many Thais who at first were willing to give the coup-makers a chance, but now increasingly are disenchanted with their performance and with elections repeatedly promised then delayed. Thais now are willing to speak out openly and critically of the military-led government.

It could not have come at a worse time for Prime Minister Prayuth Chan-ocha. The former general has been mulling the idea of becoming Thailand's unelected prime minister, set by the new military-crafted constitution to be selected by legislators — once the military gets around to holding long-delayed elections promised after the coup.

So why can't the prime minister simply fire his deputy? It's complicated, says Paul Chambers, a lecturer at Naresuan University in Phitsanulok.

"I think Prayuth probably already took his deputy prime minister aside and said, 'Look, you need to control yourself.' But you know, I don't think Prawit cares," Chambers says. "Prawit has a lot of power and a lot of influence in the army and in the National Legislative Assembly and among many other civilian and military bureaucrats. So Prayuth can't just say, 'You're out.' "

So far, the prime minister and his fellow former generals in the Cabinet have closed ranks around Prawit. But even if Prawit were to be fired, Thitinan says, it could cause problems for them.

"The difficulty for this government is that if Gen. Prawit goes, it could be a slippery slope. He could go, but he might pull down some people with him," Thitinan says. "A lot of the cabinet members, a lot of the generals have unanswerable, unaccountable wealth, luxury items, and you can see some of them on the assets sheets. But some might not be declared."

For a military government that came to power promising an end to corruption and the restoration of good governance, January has been an embarrassing month. But Chambers thinks Prawit and the military will weather the storm and the investigation by the National Anti-Corruption Commission.

"I would expect that this watch scandal is just going to be dragged out by the Anti-Corruption Commission and that in the end, nothing is going to get done and that the junta itself is going to hope that people forget about it," he says.

But in this case, Thai civil society — largely cowed by the military after its 2014 coup — isn't backing down.

"The case of Gen. Prawit has shown that the military government protects their own members. They are not serious to solve the problem of corruption," says longtime democracy activist Srisuwan Janya. "They should be a good model for society but the aren't. And they should not run the country. They don't have the morals to run the country."

But the military still has the guns. And a new constitution ensures its influence will continue in Thai politics long after elections, first promised for 2016, are finally held. In theory, the twice-delayed vote is scheduled for later this year, but looks as if it may be pushed back, again, to early 2019.

Srisuwan calls this a "very dangerous" time for Thai society.

Another political activist, Ekachai Hongkangwan, takes a more generous view. He says he wants to give Prawit a present. He feels bad that Prawit has to borrow watches from his friends. So Ekachai has offered to give him his own 10-year-old Seiko. It's not a Richard Mille, he concedes, but it keeps good time.

And more to the point, he says, it's a reminder for Prawit and his colleagues.

"I want to tell them that your time is over," he says. "That the military government's time is over."

So far, he has not been able to deliver the gift. Whenever he tries — 10 times now and counting — he gets shooed away by security. He says he'll show up for the next Cabinet meeting next Tuesday and try again.