Accessibility links
Crimea's Leader Sergei Aksyonov Speaks With NPR About Ukrane, Russia : Parallels As the U.S. issues more sanctions over the Ukraine conflict and Russia's annexation of Crimea, Crimean leader Sergei Aksyonov speaks with NPR in Simferopol and lays out his vision for the region. 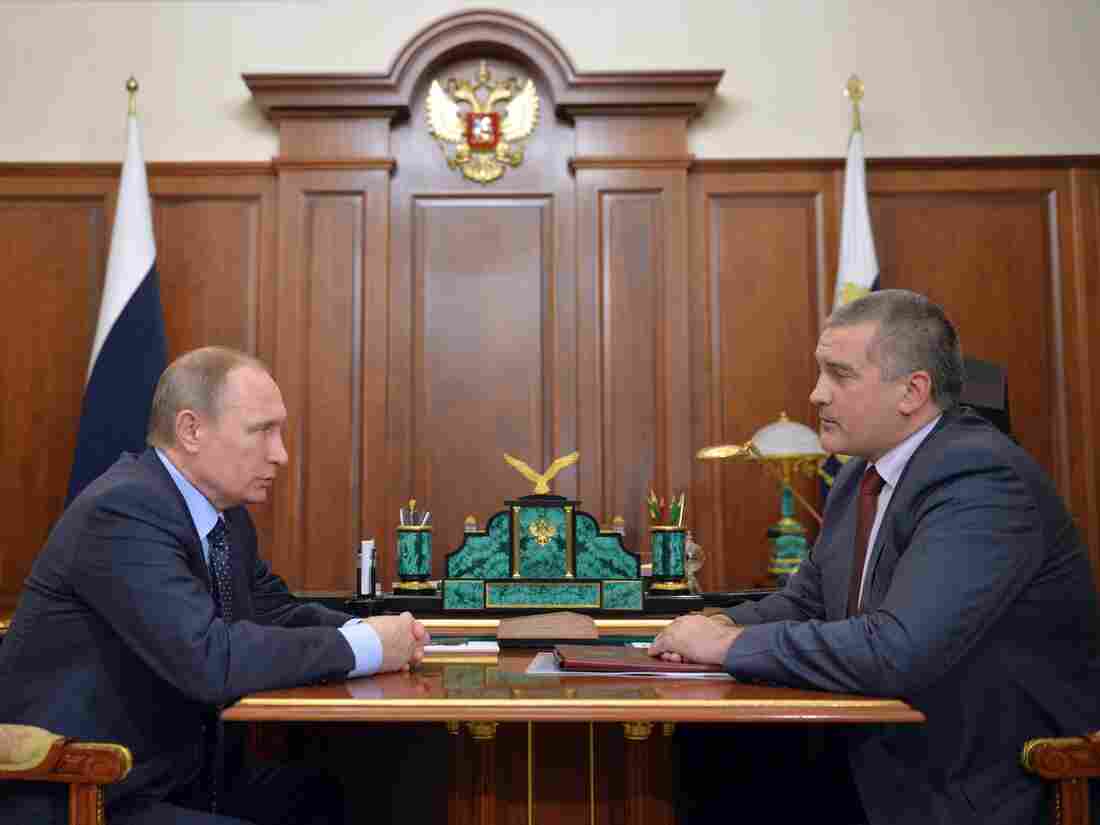 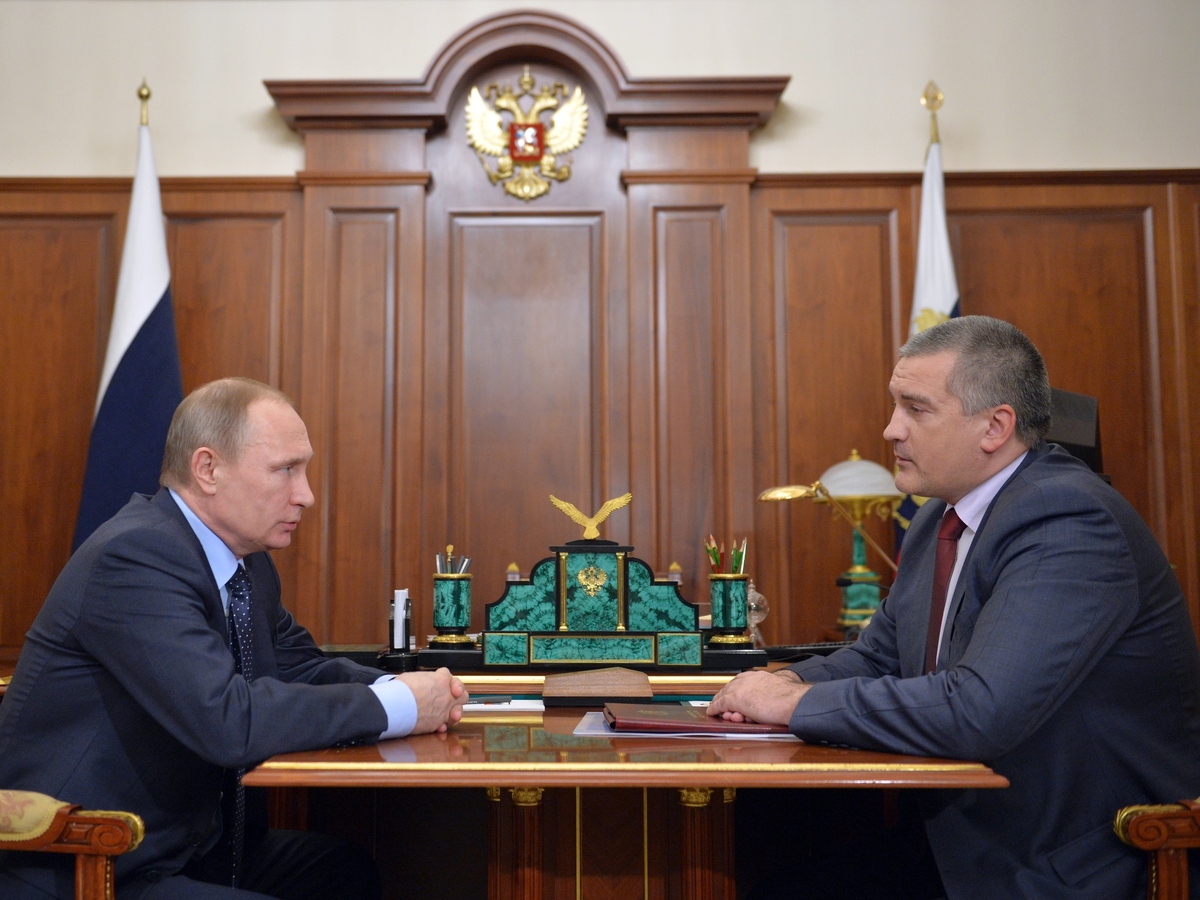 When heavily armed Russian troops began fanning out across Crimea in February 2014, one man stepped out of the shadows to lead the movement to break off from Ukraine and join Russia.

Sergei Aksyonov, then the head of a small pro-Kremlin party, was appointed the leader of Crimea and oversaw a referendum in favor of the split that few countries recognized. The lightning Russian takeover was a watershed moment, leading to a downward spiral in relations between Moscow and the West.

"Crimea will never return to Ukraine, and it's senseless to set any conditions to that end," Aksyonov, 45, told NPR Thursday in an interview in the government building in Simferopol, the regional capital.

Crimea, a strategic peninsula that juts into the Black Sea from the Ukrainian mainland, has been the base for Russia's Black Sea Fleet for more than 200 years. Days after the 2014 annexation, Russian President Vladimir Putin said he couldn't have countenanced the possibility of Crimea falling into NATO's hands.

Crimea has since been turned into an "impenetrable fortress" and faces no military threats, Aksyonov says.

As for punitive sanctions imposed by the U.S. and the European Union after the annexation, he says they had little effect on the local economy, as there were few international investors or foreign tourists in Crimea to begin with.

Aksyonov says he "absolutely doesn't care" about being sanctioned by the U.S. and EU for his role in Crimea's annexation. In Kiev, Aksyonov is considered a collaborator with a foreign occupying power and is under investigation for treason.

How Has Life In Crimea Changed Since Russia Seized It From Ukraine?

How Has Life In Crimea Changed Since Russia Seized It From Ukraine?

Ordinary Crimeans complain that after being incorporated into Russia, they saw prices double and incomes dry up as vacationers, especially from Ukraine, stayed away. Deliveries of supplies from the Ukrainian mainland were cut, making the region of 2.3 million almost entirely dependent on shipments by ferry from Russia.

"Ask any Crimean, the biggest change is the construction of the Crimean bridge," said Aksyonov, referring to a 12-mile road-and-rail link that will connect the peninsula to Russia. The bridge will open to cars later this year and to trains in 2019, he said.

A highway across the peninsula and two power stations are also scheduled to open this year.

Investments into Crimea's infrastructure until 2020 will total 1 trillion rubles, or about $18 billion, Aksyonov said.

"Not one Ukrainian president devoted as much attention to Crimea as Vladimir Putin does now," Aksyonov said.

While there is no reliable polling on what Crimeans think today, pro-Moscow sentiment has always been strongest here among Ukraine's Russian-speaking regions. Crimea became part of Ukraine in 1954, when an internal border within the Soviet Union was redrawn.

Many Crimeans voice the opinion that despite the current economic hardship, they prefer the predictability of Putin's Russia to the chaos of Ukrainian domestic politics — not to mention the low-level war in eastern Ukraine.

Even Crimeans who oppose the Russian annexation don't deny that their long-neglected region has seen upgrades in schools, hospitals and roads. But they say the improvements have come at the price of political freedoms.

"There's an atmosphere of fear to say what you really think," said Nariman Dzhelalov, a leader of the Crimean Tatar minority. "Only that small group of people who are completely in love with Putin feels comfortable saying what they think. Anybody with a critical viewpoint will be rather afraid."

Crimean Tatars, who were deported to Central Asia during Soviet rule, have largely remained loyal to Ukraine. In a recent report, Human Rights Watch said Crimean Tatars are facing "intensified persecution" by the pro-Kremlin authorities.

At the end of 2017, at least 55 Crimeans were behind bars in politically motivated cases, according to Olga Skripnik, the coordinator of the Crimean Human Rights Group in Kiev.

Aksyonov flatly rejects such criticism and denies that the Crimean Tatar community is being targeted.

"We don't have any political prisoners, not a single one," he said. "Crimea returned to Russia forever. Anyone who advocates resistance is advocating bloodshed; of course we can't accept that and will react."

The only way Ukraine could have kept control over Crimea was by joining a Russian-led trade bloc of former Soviet countries, Aksyonov says.

Former Ukrainian President Viktor Yanukovych, who had been pursuing a pro-European course, abruptly backed out of an association agreement with the EU after intense opposition from the Kremlin. When pro-EU Ukrainians then took to the streets, a months-long stand-off with the police began on Kiev's main square, the Maidan Nezalezhnosti.

After the protests turned bloody in February 2014, Yanukovych fled Kiev as his support base crumbled.

Crimeans who opposed the pro-Western provisional government that took over in Kiev rallied around Aksyonov to show their support for Russia. Within a week after Yanukovych's flight, Russia had already established control over Crimea – and Aksyonov was in power.