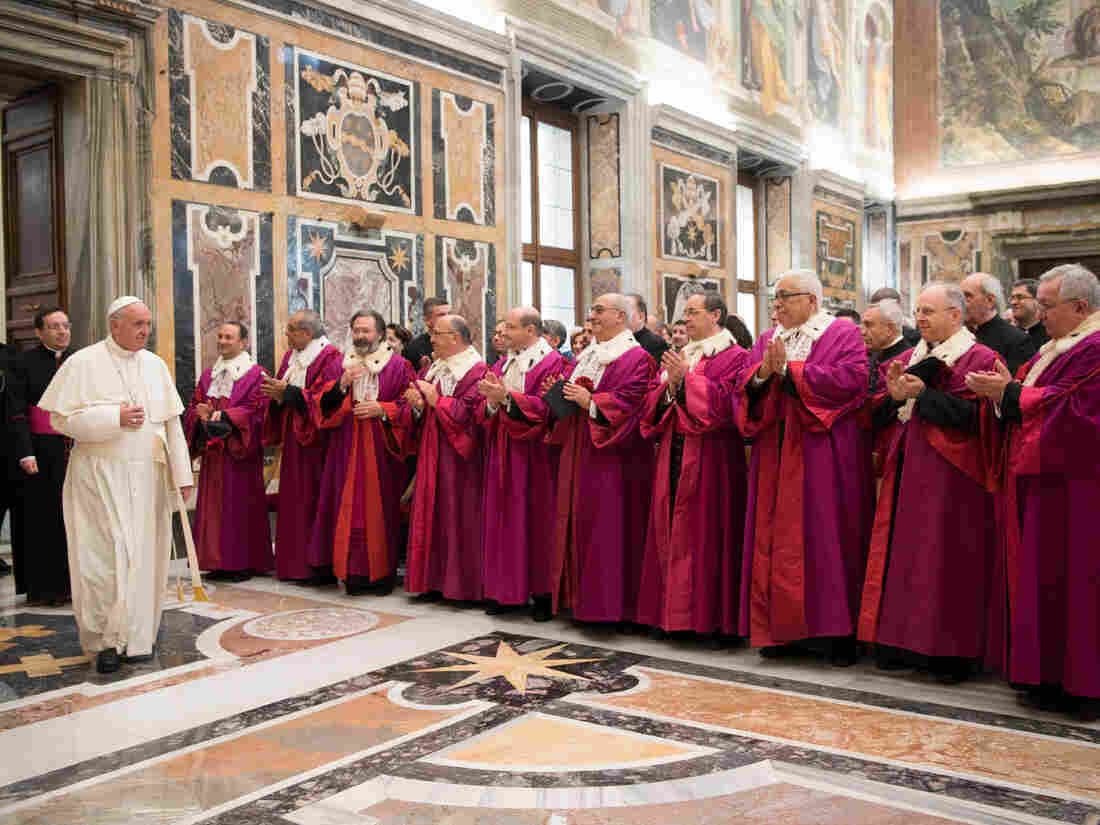 Pope Francis meets members of the Roman Rota, the supreme Tribunal of the Holy See, at the Vatican on Monday. AP hide caption 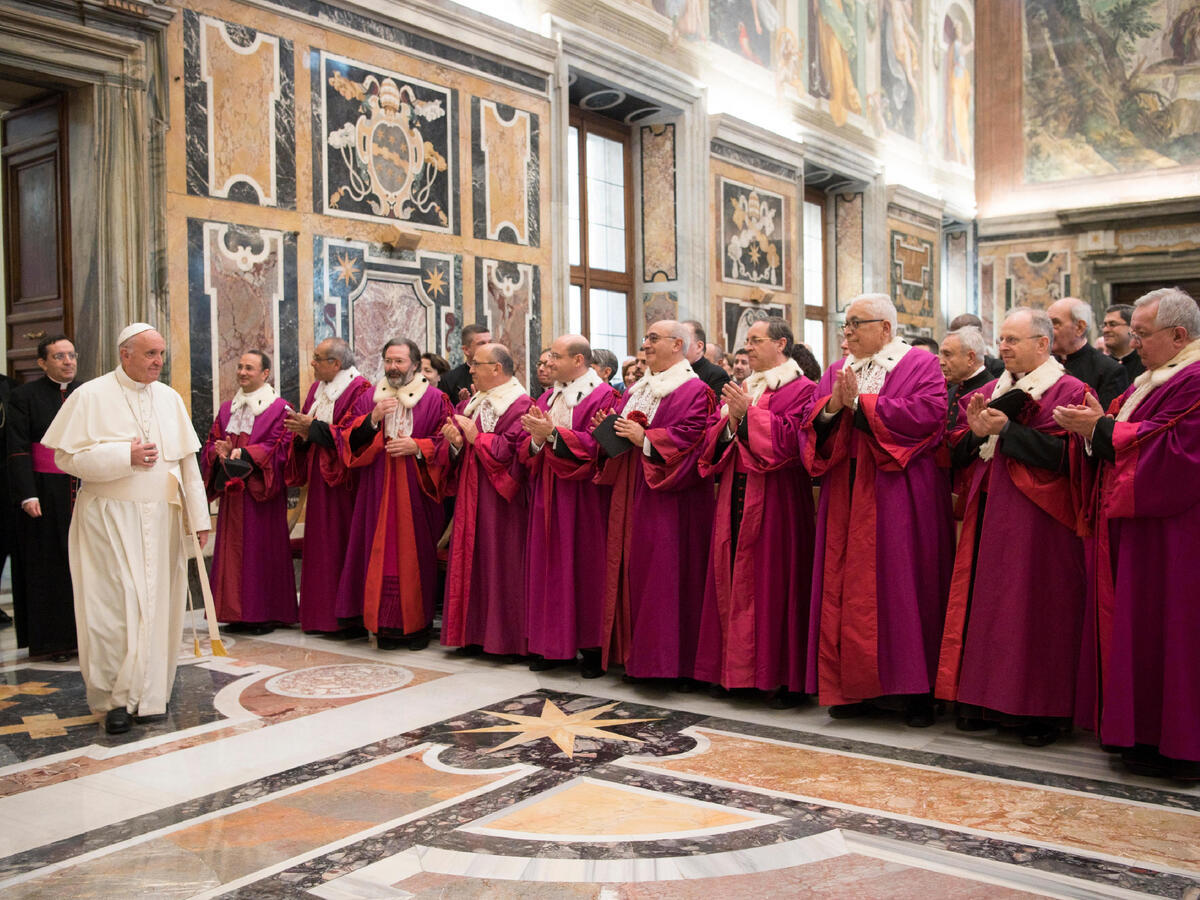 Pope Francis meets members of the Roman Rota, the supreme Tribunal of the Holy See, at the Vatican on Monday.

When Pope Francis visited Chile earlier this month, he lashed out at victims of sexual abuse and accused them of "calumny" regarding a bishop who is suspected of covering up abuse they endured by a pedophile priest.

The pope said there was "not a shred of evidence" against Chilean Bishop Juan Barros. "The day they bring me proof against Bishop Barros," he said, "I'll speak."

Now the pope is sending a top envoy on a mission to Chile to look into survivors' claims.

A Vatican statement said Maltese Bishop Charles Scicluna, the Church's most respected sex crimes expert, will "listen to those who have expressed the desire to provide elements" about the case of Barros. It said new information had emerged.

The pope's remarks in Chile had highlighted some Vatican-watchers' concerns about his commitment to combating sexual abuse by members of the Catholic clergy — an issue that has undermined the Catholic Church's moral authority in much of the world.

There were high expectations in 2014 when the pope created the Pontifical Commission for the Protection of Minors, headed by Cardinal Sean O'Malley. 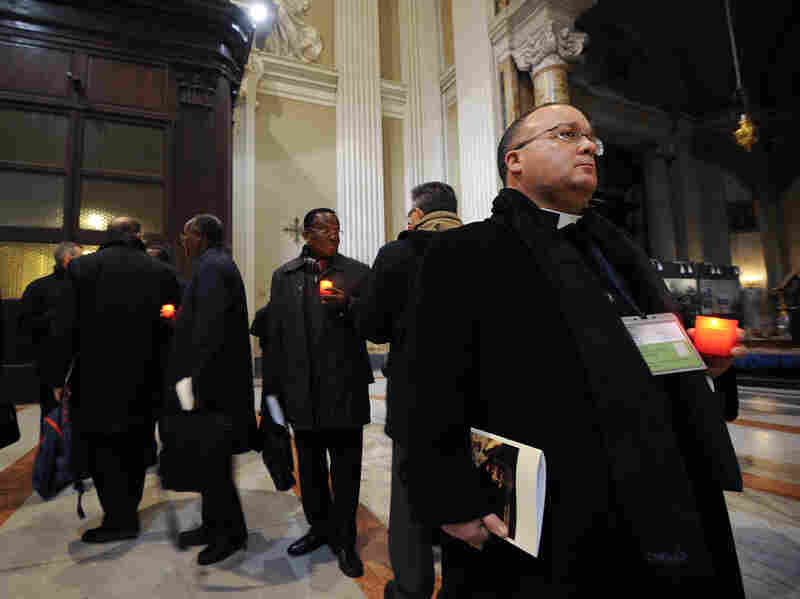 Maltese Bishop Charles Scicluna, shown here in 2012, will travel to Chile to look into survivors' claims. He is the Catholic Church's most respected expert on sex crimes. ANDREAS SOLARO/AFP/Getty Images hide caption 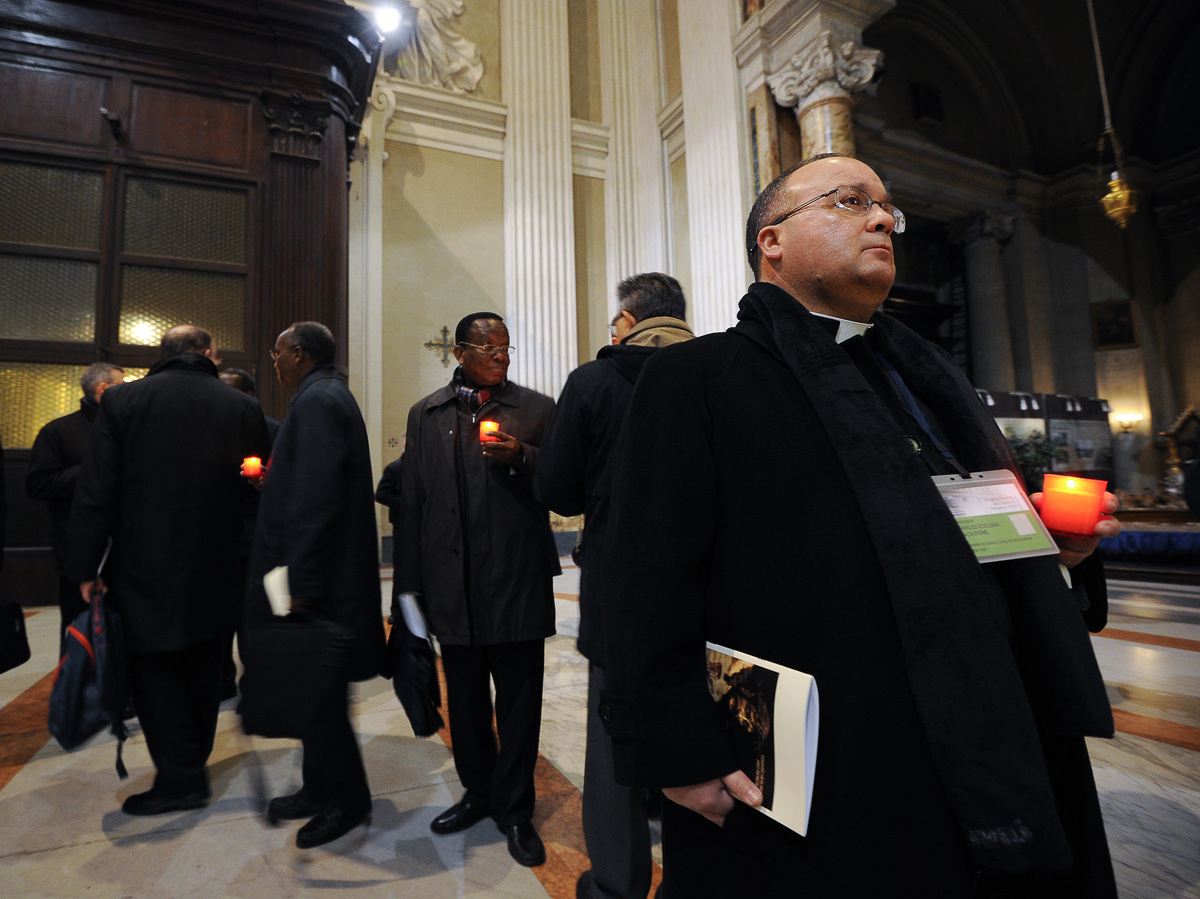 Maltese Bishop Charles Scicluna, shown here in 2012, will travel to Chile to look into survivors' claims. He is the Catholic Church's most respected expert on sex crimes.

The body included two survivors of clerical abuse, a man and a woman. But the two, Peter Saunders and Marie Collins, resigned in frustration over the slow process — and obstruction — of Vatican administrators.

The commission had also recommended that the pope set up a separate department in the Holy See to deal with cases of bishops who do not protect children and create a tribunal to try bishops. Francis agreed, but handed the task to the Congregation of Bishops — the very office that creates bishops and is unlikely to want to put its own men on trial. It is not clear what happened to the tribunal proposal.

Meanwhile, the term of the commission members expired on Dec. 17, and no new members have been announced.

During the flight back to Rome following the pontiff's visits to Peru and Chile, the pope said the delay and the renewal of the commission are part of the normal process at the Vatican where these things take time.

Reporters on that flight asked Francis — who is from Argentina and studied in Chile — about his support for Barros.

"The most moving [question] was [from] a Chilean journalist who, with her voice cracking, said simply, 'Why isn't the survivors' testimony proof for you?'" says Joshua McElwee, Vatican correspondent for the National Catholic Reporter.

"For me," says McElwee, "it was mystifying to hear the pope say there is no evidence, but then to also say the bishop is innocent."

The pope's remarks prompted scathing headlines in Latin America and in leading English-language Catholic publications. In an editorial, the National Catholic Reporter called the pope's behavior "shameful" and said his defense of Barros was "mystifying." The pope "slandered abuse survivors," the paper said. The Religion News Service called out the pope's "blind spot on sexual abuse." 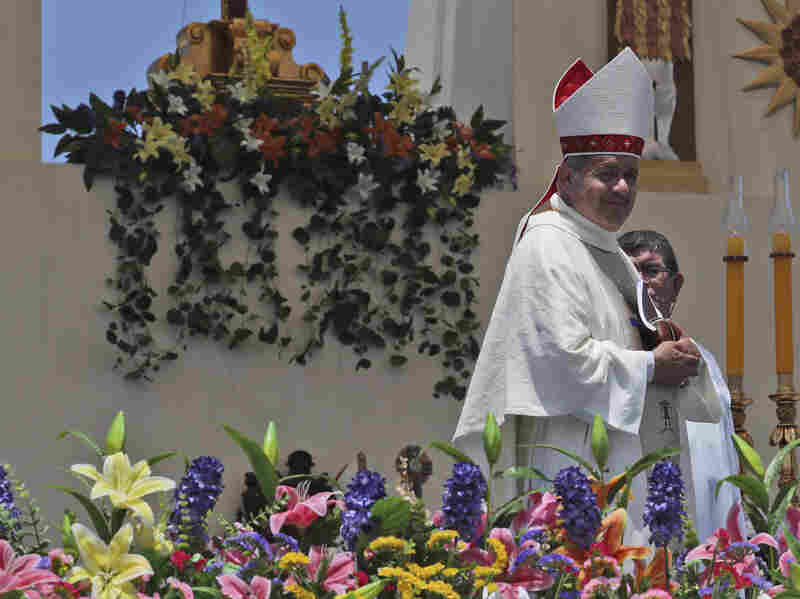 Chilean Bishop Juan Barros leaves after a Mass celebrated by Pope Francis in Iquique, Chile, Jan. 18. Many Chileans are furious over Francis' 2015 decision to appoint Barros, a bishop close to the Rev. Fernando Karadima, who the Vatican found guilty in 2011 of abusing dozens of minors over decades. Barros has denied he knew what Karadima was doing. Alessandra Tarantino/AP hide caption 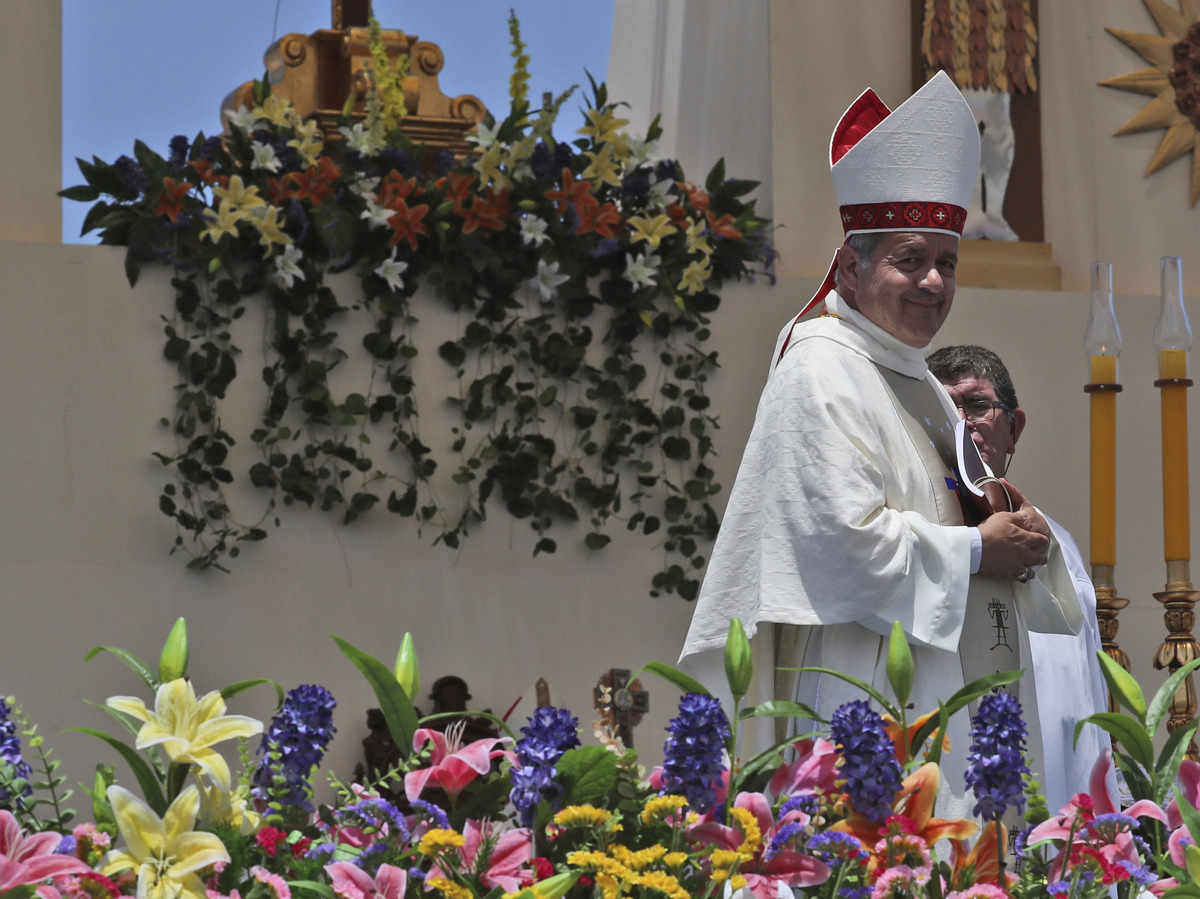 Chilean Bishop Juan Barros leaves after a Mass celebrated by Pope Francis in Iquique, Chile, Jan. 18. Many Chileans are furious over Francis' 2015 decision to appoint Barros, a bishop close to the Rev. Fernando Karadima, who the Vatican found guilty in 2011 of abusing dozens of minors over decades. Barros has denied he knew what Karadima was doing.

The tone in European media was very different. The emphasis was on the papal apology, not the abuse itself, Gianluigi Nuzzi, author of several books on Vatican scandals, told an Italian radio program.

"Especially in Italy," said Nuzzi. "Since we're next door to the Vatican, everything is muted, swept under the rug. There's been nothing close to the cases that shook Ireland and the United States."

When cases of pedophilia occur in Italy, they're usually hushed up. And having lived in the shadow of the Vatican for some 2,000 years, Italian Catholics can be jaded. It is common for parents to warn their children not to be alone in a room with a priest.

It's also part of Italian folklore that some prelates might have mistresses, prompting dark jokes about the village priest: "Everybody calls him 'Father,'" goes one joke, "except his children, who call him 'Uncle.'"

Societies that have dealt publicly with clerical sex abuse tend to be English-speaking or northern European, cultures that encourage victims to seek compensation. That, says Robert Mickens, English editor of the Catholic daily La Croix, "is not the case in some other places like Latin America, Italy, Spain, Portugal — where the victims have been much slower to come forward and speak publicly about this."

Mickens says the pope's decision to send the Vatican's top sex crimes investigator to Chile to deal with the Barros case is a positive sign that he has understood he made a mistake.

"Pope Francis is someone able to change his mind," he says.

But, he warns, the pope still has not enacted clear procedures and mechanisms to deal with one key issue: "the accountability of bishops — holding bishops responsible for covering up or mishandling, mismanaging cases of abuse."

The pope has made repeated statements that there will be zero tolerance on abuse. But not everyone at the Vatican shares his views.

"It's no secret there are people with different views inside the Vatican, and they are not on the pope's page," says Gerard O'Connell, Vatican correspondent for the Jesuit weekly America magazine. "And some still move with a culture of cover-up, prefer as far possible to keep things hidden. And yet Francis wants it more transparent."

Of all the pedophile priest scandals of recent years, perhaps the most devastating was in Ireland, where Catholicism is closely linked with national identity.

Most Irish Catholics cannot forgive the Church for the harm done to their children, says Paddy Agnew, a journalist with Irish RTE television.

"I don't think someone like Francis actually even now gets it," he says. "How angry, and how disgusted, and how many people feel utterly repudiated by what has happened."

Francis may soon hear directly just how angry Irish Catholics are. He is expected to visit Ireland in August.